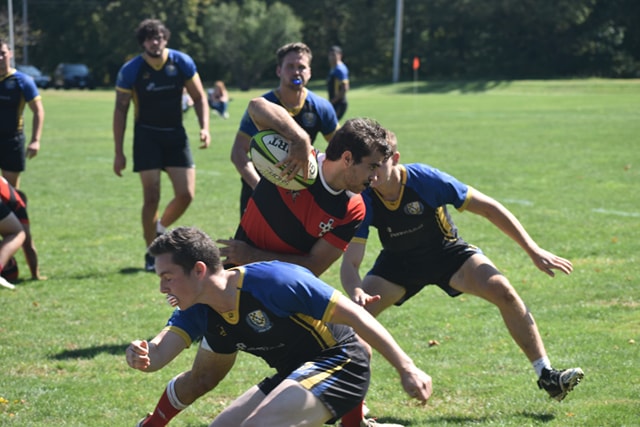 A blustery Saturday morning on the Long Lane Pitch set the stage for Wesleyan’s Men’s Rugby team. The Cardinals faced off against the University of New Haven, a team perhaps capable of emasculating The Rock “Dwayne” Johnson himself.

The Old Methodist side had just seen a spell of victories, thumping Trinity and Mitchell College in the two consecutive weeks prior. The team sustained injuries along the way, but nevertheless had a winning streak in the works.

Despite the pitch’s distance from central campus, the team welcomed a large turnout from what seems to be an ever-growing fanbase. The cheer section even included a FaceTime call all the way from Italy from captain Casimir Oscar Caspar Eugene Fulleylove-Golob ’21.

A stellar kick-off from star first year Henrick Koo set Wesleyan astronomically on the right foot, and was followed up by a crunching first tackle by resident meteor Tucker Kirchberger ’22. Unfortunately, this was short-lived momentum, as the titanic physicality of the University of New Haven trundled over the try line for an early score.

Moments later, Pironti received a stunning pass from Griffin Dorman ’23 and proceeded to dart his way through the entire UNH line-up, unstoppable on his path. The UNH squad was left dumbfounded.

The Wesleyan backs, captained by Forrest Walker ’22, showed incredible technical ability with a sequence of sublime passes. The run led to a show-stopping break by Tyler Burdick ’21, and finished with another three-point conversion by Pironti.

Half time saw a rousing team talk from coach Pete Velcovsky, and Wesleyan announced its return to the pitch with a convincing few passages of play, consistently laying siege to the UNH try line.

Unfortunately, rough play turned into rough times for the Cardinals: Ryan Rehl ’22 came off after a collision with the ground, and Koo’s rhinoceros force was lost after a thunderous hit deep in the second half. Such a blow to the back line saw the Cards’ advantages fade, though Wesleyan kept heads held high as they muscled through the gargantuan opposition and forced a consistent effort towards the try line. A spartan push by Old Methodist continued to yield impressive yardage, and repeated efforts to surge over the try-line by units such as Tim Jambor ’20 and Griffin Dorman ’23 eventually ended up in a fantastic try.

Pironti saw his second score in the corner, the result of a true team effort on a punishingly sunny day. While the conversion drifted just wide of the posts, morale was raised nonetheless throughout the entire Wesleyan side. The psychological tide was turned, and with five minutes remaining they took to the pitch again, determined to do their supporters proud. Nick Bowman ’23 caught every kick sent his way, running sharp lines, and McEvoy sought to continue his try-scoring frenzy from years past.

The thought of victory on the forefront of their minds, rookies Sebastian Mendieta ’23 and Michael Freiberger ’21 led the charge back against the goliaths from down the road as our resilient pack of forwards rallied like first-years on a Saturday night. To everyone’s dismay and outrage, the final whistle sounded before what certainly would have been a comeback from the Wesleyan side.

The final score was 35–16, and it was an immense effort from the entire squad to make the windswept Cardinal logo proud. Special mentions go to Jake Meyer ’21, who played the entire 80 minutes despite taking an elbow to the face, Robert Contreras ’21 and Mendieta who sustained some delicious battle scars, and substitutes Henry Reade ’22 and Marcus Khoo ’23 who were fearless in the face of such elephantine adversity. Of course, credit also goes to the loyal supporters of Wesleyan Rugby, along with the entire WesRugby team, who went undefeated on that glorious day.

Bryce Hunt can be reached at bhunt@wesleyan.edu.

Terra Ganey can be reached at tganney@wesleyan.edu.