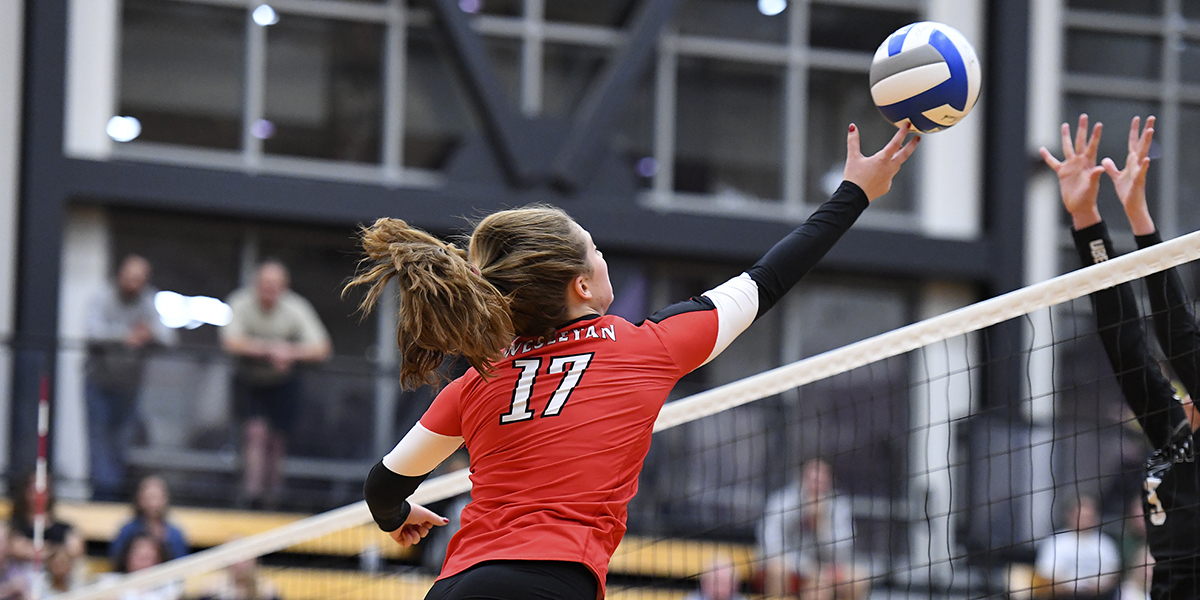 If you hear a loud noise coming from the direction of the Silloway Gymnasium, don’t be alarmed; it’s just Wesleyan Volleyball, the runaway train chugging along as it steamrolls foe after foe.

After jumping out to a 3–0 record to start the season, the Cardinals won their next four matches before dropping a tight competition against Tufts last Saturday. However, the team quickly rebounded against Conn. College Thursday night. While out of first place in the NESCAC by a half-game, the team looks every bit of a powerhouse with an 8–1 overall record.

After beating Vassar, Bowdoin, and Rhode Island College (non-conference) the weekend of Sept. 7, the Cardinals traveled down I-84 to Danbury to take on Western Connecticut State University, as well as fellow visitors SUNY Morrisville. Both of the rival squads were humbled, as the Red and Black swept the two-game series without dropping a single set.

After dispatching the Colonials 25–19, 25–17, 25–14, the Cardinals turned their heads toward Morrisville. This match was no more competitive than the first, as Wesleyan took down the Mustangs 25–14, 25–15, 25–19. The Red and Black notched at least 11 kills in each set, with Mia Jago ’22 and Bella Ahearn ’23 leading with 9 and 8, respectively. Neither Jago nor Ahearn committed an error in the match. First-year Sarah Brown led in assists with 26. Junior Phia Bellizzi finished the weekend with a total of 38 digs across the two matches, 18 in the first and 20 in the second.

Although they had already beaten the Polar Bears earlier in the year, Wesleyan welcomed Bowdoin to Middletown once again, this time for a conference matchup. The result, however, was the same as the faceoff just two weeks earlier.

Wesleyan again took all three sets to improve to a 1–0 conference and 6–0 overall record. The first set was marred by sloppy play, as the two teams combined for 14 errors, with eight from the Cardinals. A 7–2 run finally gave the Red and Black some breathing room at 17–11. Bowdoin responded with a 6–1 run of their own, but ultimately gave the set away by committing a service error to seal the first at 25–21.

The second set showed a marked improvement in execution by the home team, as Wesleyan never trailed en route to a 25–12 victory. The Cardinals notched the final eight points of the set to take a 2–0 lead over their conference rival.

The third set also featured the Red and Black in the driver’s seat, allowing them plenty of wiggle room to survive a 4–0 run by Bowdoin and ultimately win 25–17 to take the match. Nicole Hilton ’20 led in kills, while Dennis again came out in front with 27 assists. After winning the NESCAC championship last year, Bowdoin has struggled this fall, losing three out-of-conference games to rest at an overall record of 4–5.

Unfortunately, all winning streaks must eventually come to an end, as the Cardinals found out in a heavyweight matchup against an undefeated Tufts team.

Wesleyan burst out to a hot start against the Jumbos, taking an early lead in the first set, eventually winning it for the Cards.

The second set was the most competitive Wesleyan had played yet. Down 13–12, the Jumbos embarked on a 7–0 run, only for the Cardinals to respond with an 11–4 run of their own. Tied 25–25, Tufts recorded consecutive kills to steal the set away, 27–25, handing Wesleyan its first lost set of the season. The Cardinals led late in the third, 24–23, but again failed to close things out, with Tufts scoring the final three points to win 26–24. In the fourth set, the wheels fell off for Wesleyan; the Jumbos got out to a 9–1 lead, and although the Red and Black drew close, they were never able to regain traction. The Cardinals lost, 25–16, and dropped their first match this year, as Tufts moved to 9–0 (2–0 in conference).

Senior Stasie Litinsky picked up 15 kills, while Ahearn registered 13 with a .393 hitting percentage. Although bolstered by an additional set, Kaira Muraoka-Robertson ’20 still managed to dish out a whopping 45 assists alongside 18 digs. Hilton and Graves stepped up defensively, with each recording at least three blocks.

Against Conn. College, Wesleyan returned to its dominant ways, defeating the Camels 3–0. In the first set, the Cardinals took a 9–2 lead, followed it up with an 11–2 run, and put a bow on top with an Ahearn kill to win 25–14. The second set was decided by the exact same margin. The Camels built a 3–1 lead, but couldn’t get over the hump as the Red and Black stormed back to tie it 7–7. Six unanswered points later, and Wesleyan was well on its way to its second set victory. Conn. College again pulled out to an early lead at 4–2 in the third set, but couldn’t hold the Cardinals back. Wesleyan tied it 10–10, then put the match away with eight consecutive points to win 25-13.

Jago starred for the Red and Black, racking up eight kills, including the match clincher in the third set. She also recorded a hitting percentage of .800, adding on to her NESCAC-leading .431 percentage for the year. Senior Gabby Bennett, after five kills and zero errors, now sits third in the conference with a percentage of .387. Muraoka-Robertson flashed her versatility with 17 assists and 11 digs.

Now at 2–1 in conference play, the Cardinals still have plenty of chances to climb up the leaderboards. On Sept. 27, Wesleyan travels down to Selinsgrove, Penn., to take on Susquehanna University, Stevens Institute of Technology, and Hunter College in the River Hawk Invitational.