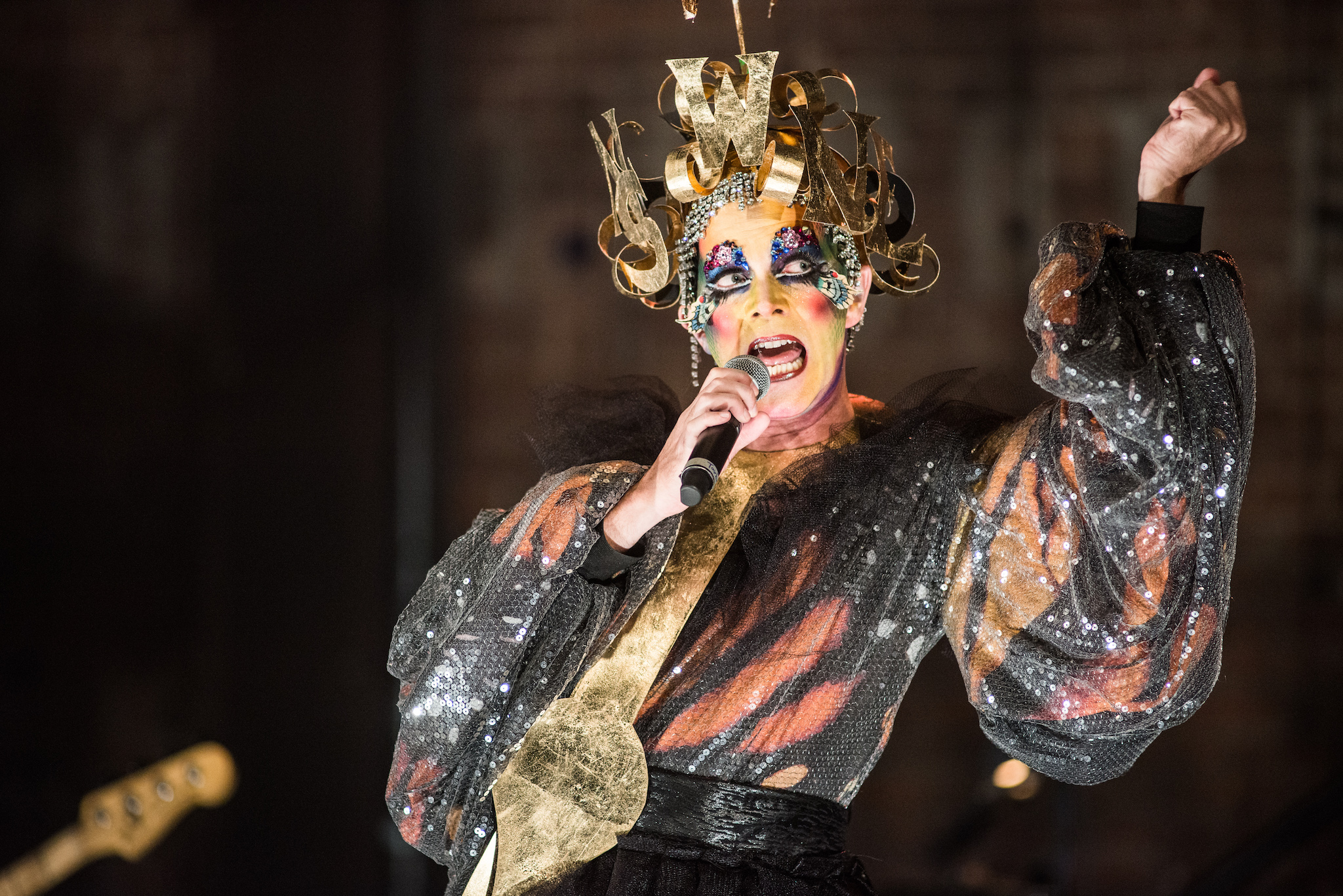 This past Saturday, performance artist Taylor Mac brought the abridged, two-hour version of “A 24-Decade History of Popular Music” to the Center for the Arts. Typically, the full show is a 24-hour “theatrical marathon” that takes the audience through American history from 1776 to the present day by using the most popular songs of each decade. For the abridged version, Mac chose to focus the performance around songs relating to the theme of resistance. Mac narrates histories of a different kind, more than just a page out of the thick high school history textbooks that may still appear all too frequently in Wesleyan students’ nightmares.

Each decade of the show—which incorporates topics ranging from women’s suffrage to the AIDS epidemic—focuses on a different marginalized group or community that built itself as a result of being torn apart. Mac writes and performs shows that highlight conversations about queerness and community building by creating a performative space that draws upon “high art” and historical theatrical conventions, such as opera and Greek theater. Mac also draws upon theatrical conventions that are typically considered low-brow such as drag and pop music.

Embedded within Mac’s performances are complex histories and rich cultural influences, such as the “Theatre of the Ridiculous,” a genre pioneered by Ronald Tavel, John Vaccaro, and Charles Ludlam. Tavel and Vaccaro were out of Andy Warhol’s Factory in New York City during the period of gay liberation in the 1960s, and Ludlam was a major figure in the Factory. Rather than following the archetypal grassroots activism of queer theater at the time that took performance to the streets, the “Theatre of the Ridiculous” invites audiences into the queer space—the culturally closeted space—to engage in non-heteronormative practices.

“What Taylor does on a much larger scale is similar to that,” CUNY Professor of Theater Sean Edgecomb—who is also a longtime friend of and author of a book about Mac—said at a panel with Mac the evening before the performance.

Mac goes by the gender pronoun “judy” when performing, using the pronoun to humorously dramatize the eye roll people commonly give when asked to use gender pronouns that fall outside the status quo.

“I wanted a gender pronoun where, if anyone rolled their eyes, it would immediately make them camp…,” Mac said, with an exaggerated eye roll, on Stephen Colbert. “You can’t say ‘JUUUDY’ without emasculating yourself!”

It is this essential norm-slashing creativity that differentiates Mac’s shows and presence from the foundations of queer performance judy draws upon. In this way, “A 24-Decade History of Popular Music” is an important stepping stone in the path of queer narratives and performances still being forged.

Mac’s “24-Decade History” itself was inspired by the AIDS epidemic and its societal responses. Mac was 14 years old when the first AIDS Walk was held in San Francisco. At that time, the cultural language around AIDS was overwhelmingly negative, often utilizing homophobic rhetoric and dehumanizing narratives of gay communities. The march and the experiences Mac associated with it became the inspiration for the show.

“The first time I ever saw an out homosexual, there were thousands of them at the same time at this AIDS Walk,” Mac said at the panel. “This really had a profound affect on my idea of queer history, pride, agency…and as I went on in my life and my art, I was subconsciously creating work that was trying to be a reenactment of that day, discovering all those queers for the first time.”

On Saturday, Mac first captivated the audience with a performance of “Amazing Grace” at the outset of the show and explained that each of the songs would be songs of resistance.

“I’ll give you one guess why I chose that theme,” Mac challenged a receptive audience.

Throughout the performance, the audience showed their continued appreciation for Mac’s work with side-splitting laughs and raucous cheers, from the moment that President Michael Roth ’78 was brought onstage to make an anti-patriarchal statement to the powerful tune that ended the show, “Power to the People” by John Lennon.

Edgecomb explained that this show is not a drag show, but is rather centered around performance of self.

“Taylor would say much more it’s about performing oneself regardless of who you are,” Edgecomb said.

That was in some ways the most amazing part of the show; the beauty of this performance was its recognition that everyone is coming from different cultural systems and societal backgrounds and its subsequent invitation to engage with the show and ultimately change.

“All representation is good,” Edgecomb said. “No matter how people come to the show, it’s worthwhile.”