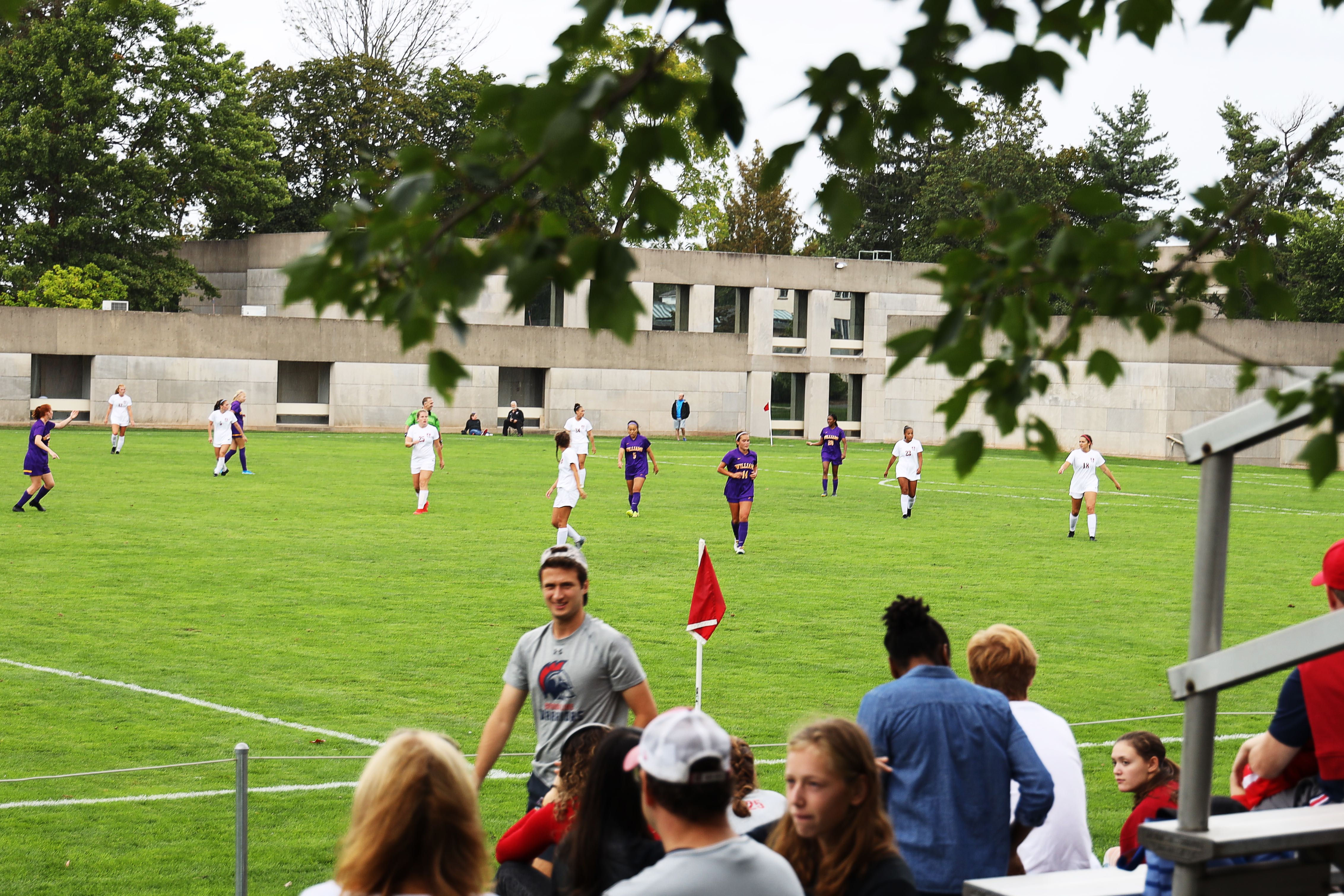 The women’s soccer team’s stellar play continued this past week, with two huge wins over Williams and Springfield College. The recent success extended their winning streak to three games, and pushed their overall record to 3–1–0.

On Saturday, in front of an enthusiastic crowd at Jackson Field, the Cards pulled off one of the biggest regular season wins in program history. The Red and Black beat top-ranked and two-time defending national champions, Williams, by a score of 2–1. The win over Williams was the Cardinals’ first in 37 years. The victory snapped the Ephs’ undefeated streak, one that started with a slew of victories in the middle of last November.

In the game, the Cards got off to a fast start, continuing what has become a trend for the team over these last three games. Captain Emily Ribatt ’21 got the offense going by scoring on a penalty kick to give the Red and Black a 1-0 lead just 14 minutes in. This was followed up by another goal not even seven minutes later, as Dani Milovanov ’23 found the back of the net for the first time in her college career. The two-goal advantage lifted the Cards’ wings until halftime. It’s safe to say the Cardinals dominated the first half.

In the second half, Williams turned up the pressure, but the Cards’ defense, led by goalie Sarah Hammond ’22, played tenaciously and didn’t allow many scoring chances for the opponent. With just about five minutes left in the game, Williams scored on a free kick to get it back to 2-1. Yet after that goal, the Cards played strong defense and didn’t give Williams an opportunity at a last-second comeback. Instead, the Ephs held on for a scoreless end of the matchup, and a resulting monumental upset.

During the game, Williams outshot Wesleyan 18-8, but Hammond stood tall in net, making six critical saves to preserve the upset. Grace Devanny ’23 led the team offensively in shots with three attempts at the net.

Ribatt was particularly ecstatic with the way the team stepped up against Williams to pull off the upset.

“It was such an incredible experience and everyone on the team understood how important that game was for us,” she said. “I am so proud of how we played for each other in that game, and we absolutely deserve that result.”

Following the exhilarating Williams upset, the Cards had a quick turnaround as they took on a tough Springfield College team just three days later. The face-off threatened to be just as contentious as the week’s earlier matchup—the Springfield Spirits had just tied with Williams in their previous game.

Yet the Cards took care of business against 25th-ranked Springfield, and left with another win, this time 3–1.

In the game, the Cards once again took the lead early when Andi Wiley ’21 converted on a free kick from just outside the box four minutes in. The score remained that way for the rest of the first half, as both teams had opportunities to score but couldn’t convert.

In the second half, the Red and Black extended their lead to 2–0 as Ribatt scored her second penalty kick just under ten minutes into the second half. She then added a third goal with just under 15 minutes to go on an incredible high shot from outside the box.

Springfield got on the board with a penalty kick goal with five minutes left, but it was too little, too late and the Cards closed the victory out. During the game, the Cards outshot Springfield 13-11 and both teams had six shots on goal. Devanny once again led the team in shots with three. On the defensive side, Hammond made five saves, including some critical ones before halftime to keep the score at 1-0.

“I think the team played really well in both games and we competed well in all aspects of the game,” Ribatt said. “The communication on offense and defense regardless of position made our team really successful, and allowed us to play fluid and complete soccer.”

Besides the team’s constructive communication, Ribatt credited the coaches for another quality performance, especially after such a big win on Saturday.

“I think our coaches did a great job of keeping us focused on playing well and not being too focused on Saturday,” she said. “We used our big win to push us to work harder and show that we deserve that victory and can compete with ranked teams.”

Fellow captain Julia Meehan ’20 also attributed the team’s success to the depth of its first-year lineup.

“The freshmen have definitely had a huge impact on the team this year,” Meehan said. “They’ve challenged us to up our level, and we now have many players that can step into roles seamlessly, allowing us to compete with top teams.”

Next up, the Cards head out on the road for the first time this year as they head to Maine to take on Bowdoin on Saturday, followed by a return trip home to take on Colby on Sunday.

“We treat every weekend as a new challenge, especially with an in-league double header coming up,” Ribatt said. “If we maintain the high level of work ethic, playing for each other and great chemistry on the field, we will continue to be successful.”