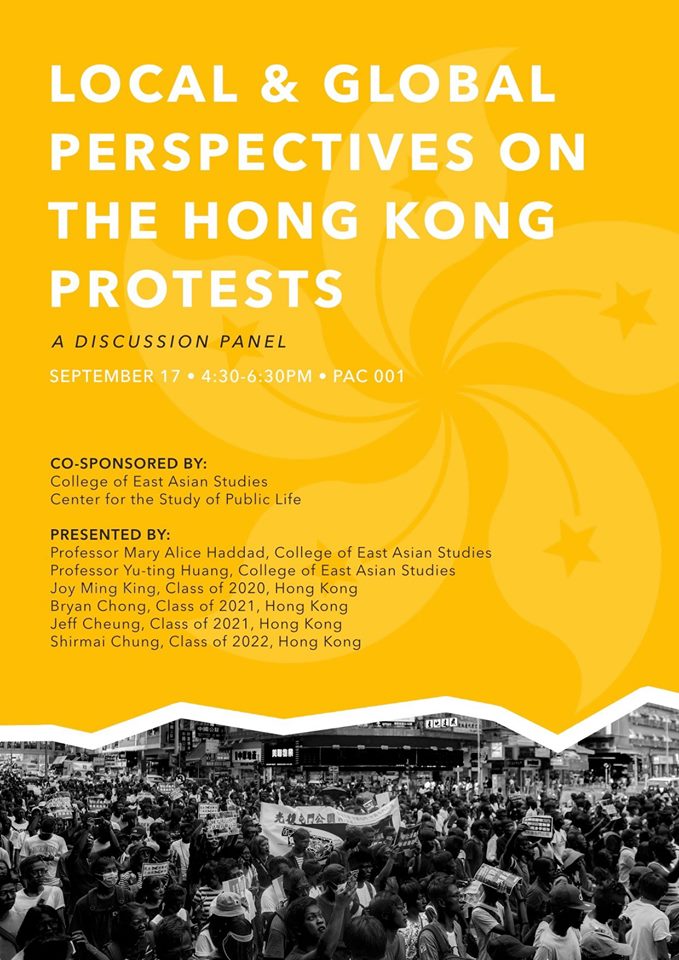 The student panelists, all from Hong Kong, discussed their personal experiences with the protests to an audience of over 130 people. Mainland students also shared their own personal perspectives during the panel’s Q&A, which the panelists thanked them for sharing.

Discussing these events in any capacity at other university campuses have ignited considerable tension and even verbal and physical altercations between students. Posters advertising the discussion panel at Wesleyan were defaced with comments asserting China’s sovereignty over Hong Kong before the event began, which panelists and faculty addressed at the beginning of the event. They urged attendees to show that these discussions at Wesleyan would not become violent, but would rather acknowledge how sensitive this discussion is for many students and the feelings of discomfort that often pervade these difficult conversations.

Recognizing the safety concerns students have voiced about the crackdown of the mainland Chinese government on public dissent, panelists requested that no photos or recordings be taken during the course of the event.

Haddad opened the panel by briefly discussing Hong Kong’s unique history as a territory distinct from other cities in mainland China. A former British colony, Hong Kong was incorporated into China under a “one country, two systems” agreement between the British and Chinese government in 1997. This stipulated that Hong Kong would remain a semi-autonomous region until 2047. Haddad explained that despite this agreement, signs of encroaching mainland authority have garnered considerable fear and resentment among residents in Hong Kong. Such sentiments were a significant catalyst for Hong Kong’s previous pro-democracy Umbrella Movement in 2014, as well as for the current ongoing mass demonstrations.

Following Haddad’s presentation on the historical context of the protests, Huang, as a professor of literature, spoke about the importance of listening to others’ stories in order to conduct productive and empathetic conversations.

“The other person is always more important when you want to have a conversation—you already know your stories, but you do not know the other person’s,” Huang said. “And this goes for all of us if we want to understand and in turn be understood.”

She also emphasized the multi-faceted nature of identity and how different aspects of one’s identity can fade in and out of focus depending on their context.

“[Identities] will evolve, flip over time, and differ from what other people think you should be,” Huang said. “So the position to start is that we do not know others’ stories, and we have the opportunity to ask and to listen.”

Speaking to the developments of the movement as well as the escalation of protest strategies, Chong emphasized that the excessive use of force used by the police, as well as their apparent negligence in addressing the organized attacks on protesters by triad groups, was a significant turning point in the demonstrations.

“The government and the police has, unfortunately, succeeded so far in manufacturing a climate of fear in the city, or what we in the Sinosphere call ‘white terror,’” Chong wrote in a message to The Argus. “The July 21 Yuen Long attack, when the police failed (intentionally or otherwise) to protect the public from TWO whole waves of gangster attacks, showed the Hong Kong public the degrees to which the police and government would stoop below to terrorize the people who support the movement.”

Chong further explained that the root of fear during these triad attacks lies in the unfortunate reality that in the event of organized violence against demonstrators, individuals can no longer trust that the police will protect and serve the people of Hong Kong.

Cheung’s presentation emphasized a different motivation behind the protests: Hong Kong residents’ desire to defend their homeland. He first showed a six-second video of two protesters in gas masks and helmets playfully tapping each other on the head with sticks, eliciting a laugh from the audience. Cheung admitted he found the video funny, too, but upon further reflection realized how people under the masks were just young adults, similar in age to the majority of those in attendance.

He went on to explain that even if the fight seems futile, Hongkongers’ love for their home motivated them to risk their lives.

“Every one of us is just a kid, who is afraid of darkness, afraid of being chased up by the police wielding threatening batons, and afraid of what could happen in the future,” Cheung said. “Countering with the tall wall established by the Chinese government, each of us is just a trembling candlelight, which is weak and easily blown away by the strong. However, even though each of us is powerless, we Hongkongers will stand together and hold up our candlelight.”

Acknowledging the role of media in shaping the dominant public perceptions of the Hong Kong protests, Chung raised the issue that peaceful activism initiatives of many demonstrators are largely ignored in mainstream narratives.

“The media tends to sensationalize the Hong Kong protests, by plastering images of protesters throwing Molotov cocktails and setting up fires in front of metro stations,” Chung said. “While these events did take place in Hong Kong, it only provides a very narrow snapshot of what’s happening on the ground. Despite what has been ordinarily portrayed in the media, many demonstrators have committed to peaceful and creative activism strategies that go unrecognized and unreported.”

Further expanding upon this point, Chung expressed that while there are different approaches to activism represented within the movement, demonstrators have shown a commitment to stand by each other in their resistance and fight for Hong Kong.

“What I’ve seen is a sense of solidarity, rather than a divide,” Chung said. “Despite the different tactics and approaches that protesters have chosen to adopt, it has been a common consensus amongst Hongkongers from the beginning of this movement that we let everyone decide what they deem fit, at their own costs, risks, and capacity. This consensus embodies a significant spirit that has carried this movement for so long—that no matter what, demonstrators stand united to fight for the common cause.”

Exploring other facets of the movement rarely reported in both local and mainstream media, King addressed many of the other groups engaged in the movement with less obvious ties to the demands of protesters. Some of these groups include the Federation of Asian Domestic Workers and Hong Kong House Wives. King further expressed that by moving beyond the over-simplistic narratives that paint the protests as a “David and Goliath” type of struggle, people can begin to see that these protests are evolving into a new kind of radical consciousness among many communities in Hong Kong.

After the panelists’ presentations, they opened the floor to audience questions. Some audience members asked clarifying questions about whether the Hong Kong protests were advocating for independence. Several students born on the mainland shared their personal experiences regarding the protests, including how they have been stereotyped by other students and asking the panelists about how to facilitate conversations between students with differing views.

When asked if protesters were advocating for independence from China, the panelists responded that this was not one of the protesters’ priorities. Rather, protesters remain focused on their five central demands: withdrawal of the extradition bill, Hong Kong Chief Executive Carrie Lam’s resignation, inquiry into police brutality, release of arrested protesters, and universal suffrage.

Several students shared that discussing the upheaval in Hong Kong raised complicated questions about their identity. They mentioned that frequent images of burning Chinese flags and rising anti-mainland sentiments were a source of discomfort. Some mainland students even spoke out in support of the demonstrators in Hong Kong and emphasized that being from the mainland does not dictate their politics. Chong thanked students for speaking out and sharing their perspectives.

“I am really glad to see that mainland students felt safe enough in this panel to express their points of view and lived experiences,” Chong wrote. “Given the actual threats to their safety by even attending this event, their bravery in making their presence felt must be applauded. It is true that their voices are marginalised in an environment like Wesleyan, and it is so important for the community to hear these stories as well.”

One student expressed how they appreciated the panelists sharing their stories, but they were concerned that only Hong Kong perspectives were represented on the panel. As one of the main organizers of the panel, Haddad responded to their comments.

“If I put mainland students on the panel to represent some kind of ‘mainland perspective’ I would be playing into the ‘Pro-Hong Kong vs. Pro-Beijing’ overly simplified narrative promoted by the press,” Haddad wrote in an email to The Argus. “Our entire purpose of having the panel was to showcase a diversity of perspectives and give some first-hand accounts. Thus, setting up some kind of ‘debate’ would completely defeat the purpose of the panel.”

King added that the panel was meant to begin conversations about the protests, not foreclose them. Panelists offered their contact information to audience members in an effort to continue these discussions.

“I was really impressed by the turnout and by the quality of the discussion,” King wrote in a message to The Argus. “It was clear that many people on campus, regardless of where they call home, care deeply about Hong Kong and the struggle being waged there. I hope that our panel discussion is the first of many such generative conversations—not just about Hong Kong and China, but also about the meaning of citizenship, home, and revolution in our time.”