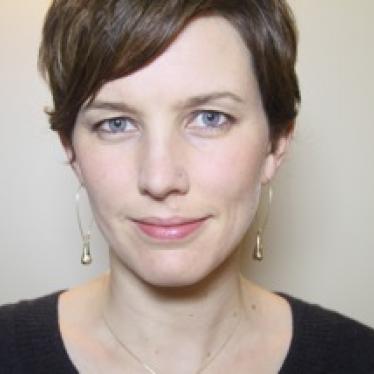 Clara Long summarized some of the most pressing issues at the border and proposed actions for students to take on Thursday, Sept. 12. The senior researcher with the U.S. Program at Human Rights Watch gave a lecture titled “The Cruelty is the Point: Human Rights Abuses on the U.S.-Mexico Border” as part of the Human Rights Talks Series.

Long began by setting up the political background, saying that while the cruelty of the Trump administration at the border is unprecedented, the Obama administration implemented regressive immigration policies as well.

Long categorized the milieu of human rights abuses into three groups: family separation, detention of children, and the exclusion of asylum seekers from U.S. soil. All three issues were, in one way or another, extensions of existing policies.

“Some of the worst abuses today have their roots in Obama administration practices,” she said.

While initiated by Obama, family separations at the border have risen dramatically during the Trump administration. Under this policy, detained immigrants are sent to federal criminal detention and then to federal immigration detention, while children are sent to shelters, Long said.

The detention of children has become one of the most frequently discussed issues regarding immigration at the United States’ southern border. Long said that there are currently at least 13,000 children in a network of shelters arranged by the Office of Refugee Resettlement (ORR). During a monitoring visit to El Paso and Clint, Texas, Long says she spoke with roughly 250 children ranging from 0 to 17 years in age who were held in such facilities. Based on interviews and visible evidence, Long reported that children are being held in jail-like conditions and often denied access to hygiene for up to one month. Most have been held for weeks at a time, and in the past nine months, Long says that seven children have died in these shelters.

This history of border abuses is extensive, and recent policy changes dampen any hope for improvement. In the ’90s, when strip searches and sexual abuse in shelters were common, Long recalled, the government signed the Florez Agreement, which defined the baseline conditions under which children can be held: children must be held for short periods of detention, and they must be granted safe and sanitary conditions.

But these terms remained vague and were the crux of many rhetorical loopholes. And four weeks ago, the government published a regulation intended to supplant the Flores Agreement. It stated that Trump changed the conditions at the border and the agreement no longer stands—the indefinite detention practice remains.

Long’s final point in the lecture examined the exclusion of asylum seekers from the United States. Under U.S. law, there should be no prohibition for those seeking asylum based on how they enter. However, near the end of the Obama administration, the Department of Homeland Security responded to the overwhelming number of people trying to seek help legally at the border through “metering,” or regulating small amounts of people that can enter. This expanded the number of people on waitlists, subsequently increasing border crossings in illegal and dangerous ways.

The Trump administration recently authorized the deportation of asylum seekers back to their original countries to wait while they go through immigration procedures, using a provision based on a law from the 1990s that responded to increasing waitlists. As of now, roughly 40,000 people are currently stuck in this program. While the Mexican government has made some guarantees to how these people can get work permits and access to shelters, such promises are often half-hearted and rarely seen through.

The Trump administration continues to interpret U.S. and international law in ways that support its efforts to deter migrants. A recent, highly politicized Supreme Court decision held that anyone who has crossed the border of refugee protection countries is no longer subject to asylum. If this law is enforced, the U.S. will essentially be closed to asylum seekers. Furthermore, while international law allows for states to return asylum seekers to ‘safe third countries,’ the administration often surpasses this law with loose interpretations. And this is only the beginning.

In a post lecture question and answer session, Long detailed some of her points while answering questions about civic duty and responsibility. One student asked whether the United States can be held accountable by international law for human rights abuses. Long asserted that there are no avenues for the U.S. to be bound by international law.

Long concluded the Q and A with a call to action.

“It is important that the U.S. take a different electoral direction,” Long said. “Or things will get far worse.”