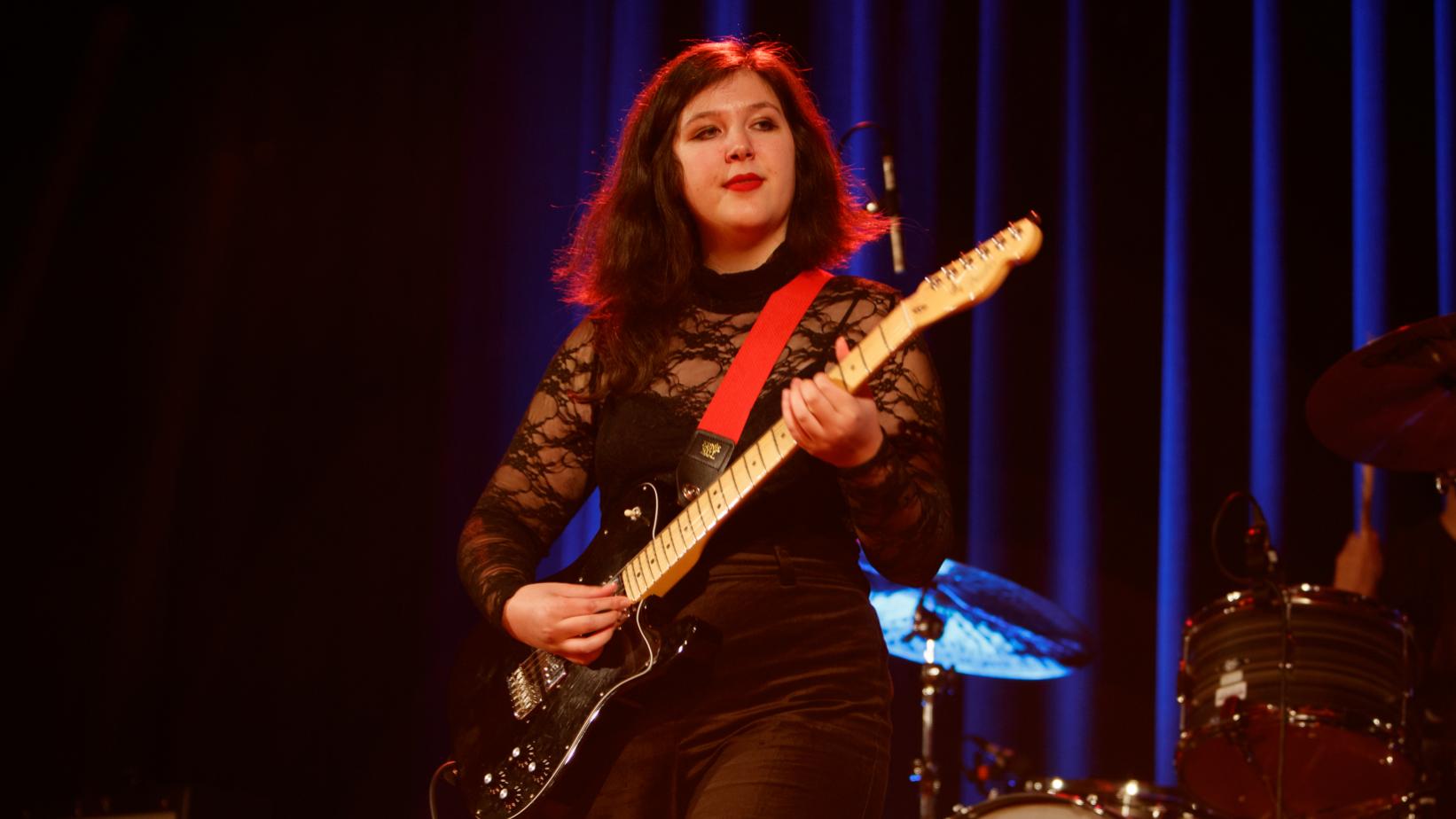 Lucy Dacus has a sweet, noticeably quiet but friendly stage presence. Onstage at Space Ballroom in Hamden, Conn., Wednesday night, she mentioned that she had last been to the venue three years prior and that she had fond memories of the space because it had been the first venue that she had booked herself. She asked the audience who had been there for the first show, and when one or two audience members raised their hands, joked that they had probably comprised the whole audience.

Wednesday’s crowd, though, was sold out, even though the Hamden venue was a fairly out-of-the-way spot for the average Lucy Dacus fan. This is an accurate reflection of how meteoric of a rise Dacus has managed to achieve over the past few years.

Originally from Richmond, Va., the twenty-four-year-old has released two albums over the past few years, both to critical acclaim: No Burden in 2016 and Historian in 2018. Another aspect of her recent spike in popularity, though, is no doubt the 2018 formation of the band boygenius with fellow singer-songwriters Phoebe Bridgers and Julien Baker. The band, whose name is a tongue-in-cheek rebuke to the self-centered soft-boys who can’t seem to tell the three artists apart, has become an indie sensation, and has helped to catapult the careers of all three women.

Opening for Dacus were Quinn Christopherson and Taylor Janzen. Janzen is a 19-year-old artist hailing from Winnipeg, Ontario, whose second EP, Shouting Matches, was released this May. Christopherson is an Athabaskan and Iñupiat songwriter from Anchorage, Alaska. Christopherson had an energetic, magnetic stage presence, despite the lethargic tempo of many of his songs. In fact, many of his songs were prayer-like in tone, slow and bewitching meditations on everything from falling in love to coming of age as a trans person and struggling with how to confront his newfound male privilege. Although such topics are complex and might not seem inherently rife for lyrical material, Christopherson managed to endow his songs with both grace and humor.

One of Dacus’ biggest hits, which she performed to particularly warm reception, was the song “Night Shift,” which, although over six minutes long, captivates throughout, mostly due to its lyrics, which are closer to a poem in affect than a song.

“The first time I tasted somebody else’s spit/I had a coughing fit,” sings Dacus. “I mistakenly called them by your name.”

The line is notable because it’s unusual, and honestly, a little gross. Yet it’s also intimate, and this quality is much of what makes Dacus’ songwriting so compelling. The listener feels not just as if they are in on Dacus’ thoughts, but as if they were in on a conversation between Dacus and her former lover. It is clear that Dacus’ writing is cathartic. It is also clear that even at her most angry, she is deeply empathetic.

Dacus maintains this second-person address through several of her songs, including in “Yours & Mine,” a gentle melody in which she admits, “I’m afraid of pain/Both yours and mine… From where it comes/And where it falls.” Much of what makes Dacus such a persuasive writer and vocalist is this sensitivity; this complex awareness of interpersonal dynamics. What heightens this sensitivity to the point of art is Dacus’ voice—soft, smooth, so easy to listen to that it’s possible to lose track of the words themselves and lose yourself in her voice. Dacus’ instrumentation is consistently simple, with her band steady but not standouts. However, her guitarist did pitch in with some gorgeous harmonies, elevating already stellar vocals to make their timbre nothing short of holy.

Dacus performed a fantastic cover of “La Vie En Rose,” with the calm, sultry tones of her voice perfectly suited to the French lyrics. Another standout was “My Mother and I,” a song that could easily be made foolishly sentimental but was instead a searing reflection on inherited generational insecurities.

Dacus also played a few old favorites during her set, including her first single, “I Don’t Wanna Be Funny Anymore,” a slow but rhythmic reflection on her role among friends. “Lately, I’ve been feeling like the odd man out,” Dacus sings. “I hurt my friends saying things I don’t mean out loud.” There’s so much that is smart about this song, but part of what makes it feel so fresh is its recognition of the insecurity that is so often the twin of comedy. Of course, Dacus is funny; in fact this is one of her greatest strengths as a writer. But she is also, understandably, exhausted by the need to always be that person. This is also one of Dacus’ songs that feels like it has a lot of queer subtext, in the sense that she is writing about needing to be funny because she isn’t someone who can naturally fulfill roles of, say, perfect femininity.

Dacus played several currently unrecorded songs as well, which she asked the audience not to record, and which seemed to lace her usual soulful empathy with increasing edge. Throughout the concert, I was struck not only by Dacus’ music, but by the kindness and wholesomeness of her crowd, which showered the long—and at times sleepy—opening acts with support, cheered when she admitted to be battling a cold, and yelled out sweet, mostly sober, compliments the entire show. It was just the kindness that my Wednesday night needed. Clearly, when you are a singer whose work is grounded in empathy, you tend to attract like crowds.