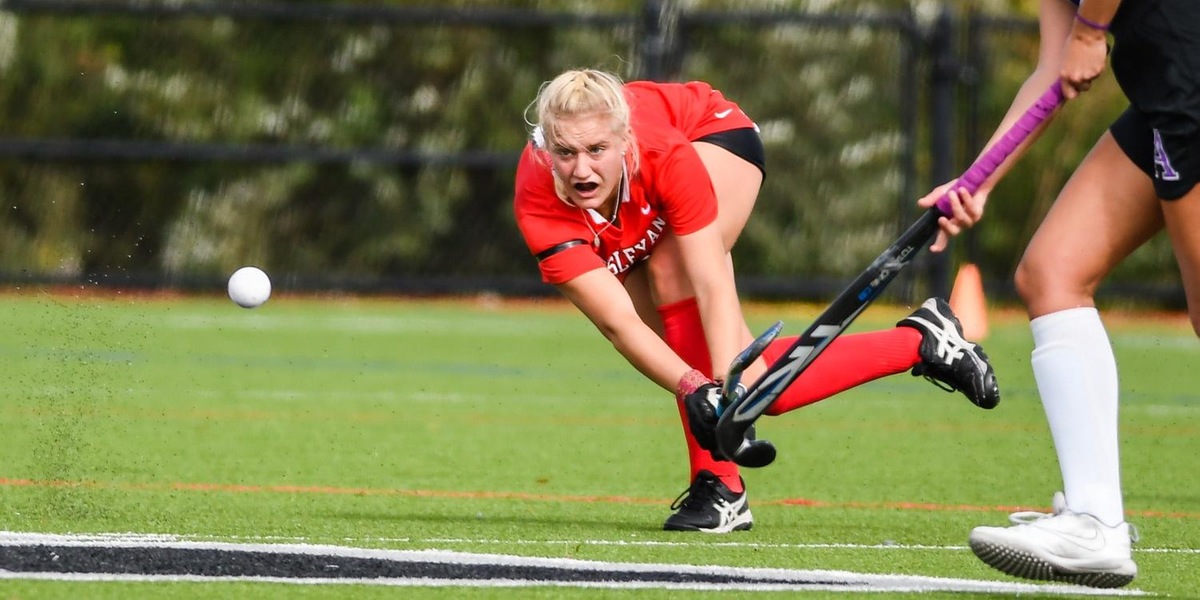 The field hockey team is bursting with new energy. After a disappointing 2018 season (4–11), the program decided to revamp with a new coach, team, and outlook. Incoming Coach Christine Kemp has a revolutionary vision for her players—one she believes will lead the Cardinals to victory both on and off the field.

“The team has been working extremely hard to learn new skills and strategies and change the overall culture of Wesleyan Field Hockey,” Kemp said. “The future is very bright for this group and this program.”

Kemp hails from Vermont’s Castleton University, where the field hockey team held a 23–48 four-year record before her arrival. Last year, Kemp single-handedly took the team to a Little East Conference (LEC) championship title. Under Kemp’s supervision, Castleton also broke its winning record with 11 consecutive victories and 15 triumphs overall in the season. Kemp was named LEC 2018 Coach of the Year for her incredible leadership and hopes to continue her record-breaking streak with the Cards.

Kemp isn’t the only one energized about the program’s updates. Captain Abby Manning ’20 expressed faith in the trajectory of the program since Kemp’s arrival.

“Coach Kemp has been really great so far in structuring our new style of play and attitude, and I’m confident this is going to be a really strong season for us,” Manning said.

That winning mindset drove the team through their first game against Eastern Connecticut State University last Wednesday, where they left the field with a booming victory. Forwards Amy Schaap ’21 and Diana Schwarz ’23 each finished two clean shots, securing a 4–0 victory for the Cardinals.

The Cards were not so lucky this Saturday, Sept. 7, when they faced the 2018 NCAA Champs, Middlebury. The strength and coordination of the Panthers moved them to an eventual 7–0 win against the Cards with back-to-back goals in the 55th minute.

Middlebury, notoriously strong on offense, struggled to get past Cardinal lines throughout the first half of the game. Despite the visiting team’s aggressive right wing, Cards team members Rachel Pomerantz ’20, Alex Ramsden ’22, and Erica Horowitz ’20 swung back with powerful defensive shots throughout the first half. In a close call with a shot to the right corner of the cage, Olivia Baglieri ’22 made a crucial save and kept the game at 0–0 for the first quarter. Goalie Delaney Wood ’20 also kept the initial score low, blocking a total of 19 shots in her 55 minutes of playing time.

Coaches aren’t all that’s new to field hockey this year. A 2019 NESCAC ruling requires that all clocks be stopped during the setup for a corner, which allowed for the Panthers to up their goals on Saturday.

Middlebury’s strong offense left them with a whopping 19 corner penalty shots compared to Wesleyan’s one. Despite the relentlessness of this near monopoly on corners, Wood and her defenders were not discouraged from retaliating with full force.

Wesleyan left the field in an eventual 0–7 defeat, but the promising play against the defending champs kept the team enthusiastic.

“Playing the two-time defending national champions was a tall task for our second game, but I am so proud of the girls for the many things we were able to achieve during the game that just shows the start of something amazing that they are building here at Wes,” Kemp said. “The energy, excitement, and belief were all present on Saturday and we are looking forward to continuing to build off of that and grow together as a team.”

The new spirit of Cardinal resilience seems to bode well for this upcoming season, and Kemp is ready to bring her squad to the top.

“The team has been working extremely hard to learn new skills and strategies and change the overall culture of Wesleyan field hockey,” Kemp said. “The future is very bright for this group and this program.”

Cards fans are anxious for the return of prestige and victory in Cardinal Field Hockey, and Kemp is ready to take the team to a record-breaking season.

Field hockey next takes on Wheaton College on Tuesday, September 10.

Katherine Policelli can be reached at kpolicelli@wesleyan.edu.