Serving up Aces: Volleyball Returns to Play After Momentous 2018 Season 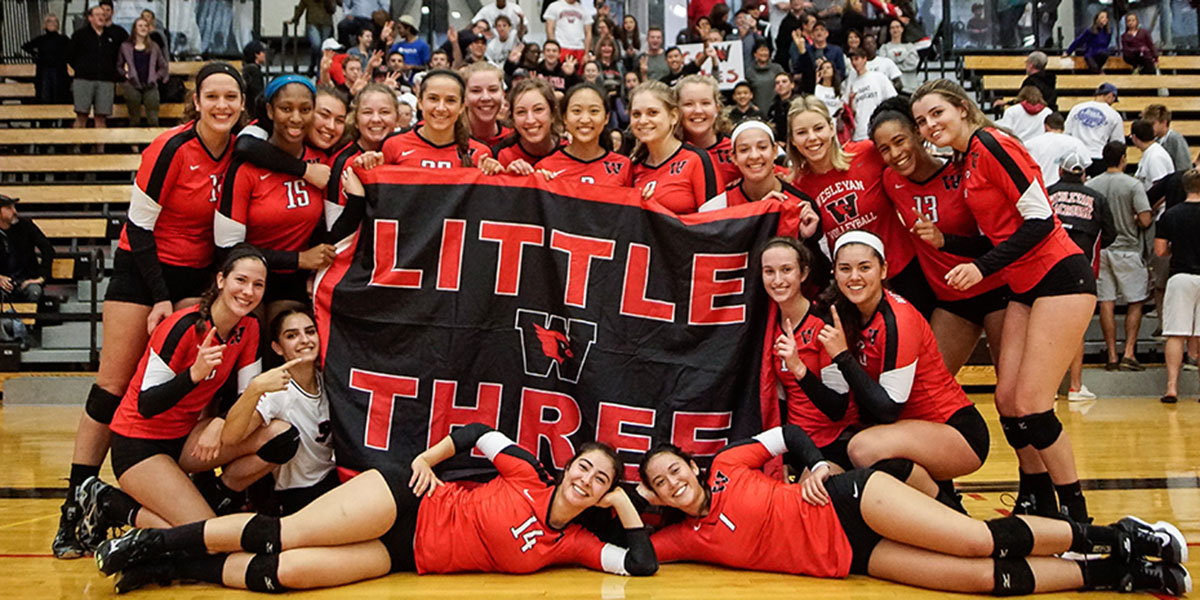 By any measure, Wesleyan volleyball had a momentous season last year. Not content with simply winning the Little Three, finishing second in the NESCAC standings, or taking an impressive 22-6 record (8-2 in conference), the Cardinals took the NCAA DIII Regional Championships in Providence by storm. Racking up wins in Rhode Island, Wesleyan would eventually defeat No. 2 Johnson and Wales University and advance to the Elite Eight in Pittsburgh as Regional Champions. Their record-setting season came to an end in the Steel City, however, as the Cardinals fell to Juniata College in a close 3-2 bout.

Luckily for Wesleyan, the team returns with enough firepower to ensure that last year was no fluke. The team returns a whopping eight seniors, including AVCA All-Region setter Kaira Muraoka-Robertson, as well as two Honorable Mentions: outside hitter/middle blocker Nicole Hilton, and outside hitter Stasie Litinsky. A versatile offensive presence, Muraoka-Robertson finished the year with 770 assists, averaging 8.56 per set. She also ended with a career high in digs: 227 total, averaging 2.52 per set. Hilton, the 2017 NESCAC Player of the Year, recorded 2.33 kills per set along with a .306 hitting percentage. Dominant at the net, she averaged .74 blocks per set for the year. Litinsky is an offensive weapon for the Red and Black, with a team-leading 2.77 kills per set on a .256 hitting percentage. Also returning is All-Region libero Phia Bellizzi ’21, who averaged an astonishing 5.95 digs per set, the 12th highest in the country.

Despite the team’s impressive history of victories, Hilton insists that the players’ sights are firmly set on the season to come.

“We have a good balance of new talent coming in and experienced players returning to help lead the team,” she said. “Although we had a successful season last year, we are focusing on the future and what we can do to get better, not what we have done in the past.”

While the team looks ahead, Hilton noted how far the program has come since her first year at the University.

“As a player in one of [Coach Ben Somera’s] first recruited classes, our grade has seen this program transform immensely from our freshman year,” she said. “Each year, we have continued to improve by working hard, bringing in talented players, and creating good habits in the gym. We hope to continue this trend not only this year, but to help create long-lasting success for the Wesleyan volleyball program.”

Somera, now entering his fifth season at Wesleyan, similarly cited the program’s gradual progress as the reason for the Cardinals’ recent accomplishments.

“If you look at the growth of our program, it has been gradual and steady since the fall of 2016, when our rising seniors were freshmen,” Somera explained. “Each year, the program starts a bit further along their path, which has allowed us to go further in our team’s exploration of how good we can become.”

Litinsky is eager to use the successes of last season as a learning opportunity for the team. Although the defeat against Juniata College might have been a bitter pill to swallow, she sees a silver lining: Wesleyan has established itself as an up-and-coming powerhouse in Division III volleyball.

“We took Juniata to five sets,” Litinsky said. “It is clear that we played hard and we didn’t take the game lightly. I believe that the game showed that we can play against the best teams in the nation. The game helped us understand how we can improve so our team can have an even more successful season this year.”

Somera agrees that Wesleyan can take the fight to any other school that might cross its path.

“We won 49 percent of the points scored and Juniata won 51 percent,” he said. “We were one percent away from a stalemate and two percent away from moving forward to the Final Four. I would say that we learned that we can compete with any team in the country.”

The Cardinals begin the season with four home games, taking on Rhode Island College and Wellesley College Friday and Saturday. Later Saturday afternoon, the team faces off against defending NESCAC Champion Bowdoin, although the matchup does not count for conference standings. The last home matchup takes place Friday, Sept. 13 against Vassar. The team takes on a tough stretch of games in late September with three straight conference matchups, against Bowdoin, Tufts, and Conn. College.

The bulk of the conference games, however, don’t take place until October.

On October 12, Wesleyan will get a chance to avenge their NESCAC Quarterfinal defeat against Amherst, and if successful, can look to take the Little Three with a win against Williams on October 25. On October 18, the Red and Black face Juniata College at home in what’s sure to be a highly competitive rematch.

Although it’s tempting for any team to look forward in anticipation to games yet to be played, Somera insists that the Cardinals’ biggest challenges will come from within.

“For a majority of our season, our focus remains on our side of the net, meaning we are trying to maximize the talents of the players on our team, build systems that allow them to be successful, and replicate scenarios we want to execute at a high level,” Somera said. “The biggest challenge for our team is not our opponents—it is accepting the reality that winning isn’t normal, and making sacrifices to make winning a priority.”

With all the recent successes enjoyed by Wesleyan Athletics, including two national championships in the last two years, it might be easy to overlook a team that merely came three games short of a third title. Rest assured, however, come tournament season in November, the volleyball team looks to be serving up aces under the brightest lights in Division III.