The Intent and Impact of Orientation Advice

It was about 11 a.m. on move-in day when I walked across College Row toward the Butterfields. The skies were textureless and gray, and soon a misty rain settled over the campus. I watched parents of new students chit-chat with one another, commiserating over their empty nests and remembering their own experiences leaving home. New students posed for pictures in front of the North College pillars, the looks on their faces ranging from intimidated to joyous to nihilistic.

My original idea as I set out this morning was to collect advice for new students from various sources, building a compilation that could function as both a way for parents to feel useful and for students to have a sort of survival guide to turn to when they are homesick or overwhelmed or questioning what type of experience they exactly signed up for—all feelings I experienced on rotation during my own orientation. One father wearing a fedora and glasses with clear frames explained to me that, while he had saved up hundreds of tidbits, he had narrowed down his tips to a more digestible three: to create a daily plan for academic time management, to do all activities with others, and to stay open and put away the phone. Another couple moving their daughter into a corner room in the Butterfields kept their advice short: “Don’t drink the punch.”

As I walked from dorm to dorm, I recognized the air of collective unfamiliarity that is common on first days of college. I have personally been through the whole ordeal twice; as a current junior who transferred to Wesleyan last fall, this was my first time witnessing students moving into their new school without schlepping boxes myself. It was also my first time being on the giving end of the advice transaction, instead of the receiving. 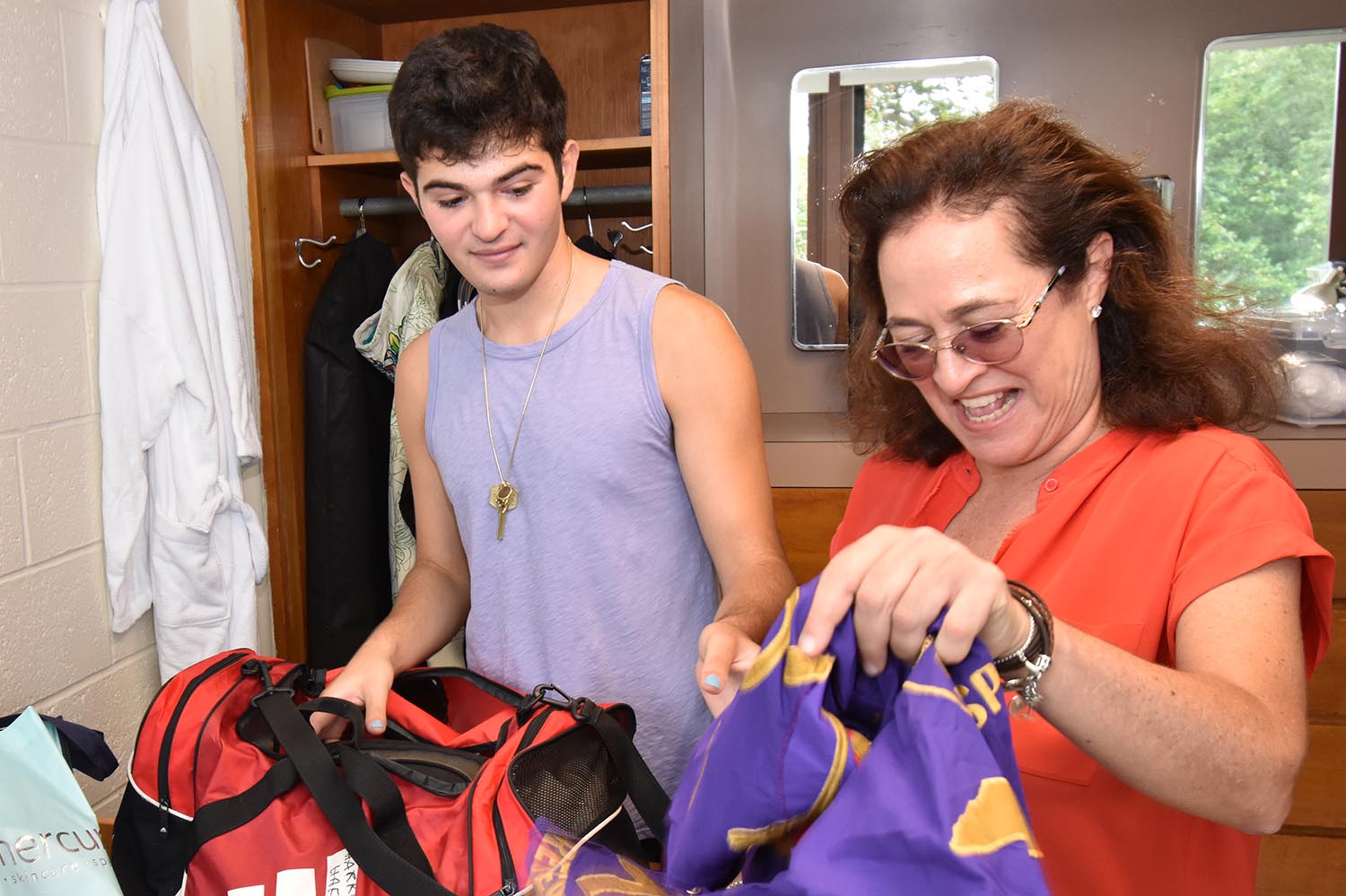 “Resist limiting people by their stereotypes,” an RA told me over lunch in the Butterfields courtyard. “Often people are much more than what you think they are.”

“You have to embrace it,” another parent said. “Just jump right in.”

As for any advice I can give to students who prefer a different pace, all I have to say is that pushing through is probably your best and only option, and you will be better for it. What is unfamiliar now will become familiar, you have many more impressions to make beyond your first.

Today, parents of students were not only giving advice, they were also receiving it. As students started orientation activities, I shuffled into Beckham Hall with a swath of parents, where we listened to various administrators and deans explain major requirements and academic resources. They also gave concise accounts of the “value of a liberal arts education,” speeches apparently intended either to make parents feel proud or to justify tuition costs by emphasizing return on investment. Some parents took notes diligently on their phones, others pretended to take notes while they refreshed their emails. The vantage point from the wall provided me with a view not unlike that of students in a college lecture hall.

The funny thing about advice is that you can listen, really listen to it, and know it’s true, but still struggle to follow it. On my first day at Wesleyan last year, it was a sweltering 96 degrees, and I had neither a fan nor air conditioning. As a transfer, I had an interview for the College of Letters scheduled an hour after I arrived, and I walked over to the academic hall with my heartbeat pounding in my ears, wearing a slightly wrinkled dress I had just pulled out of one of my boxes. By the time the interview was finished, I had missed the beginning of the introductory orientation meetings. An Orientation Leader pointed me in the direction of an Exley classroom located in the labyrinth of hallways, where I stumbled into an orientation group that was almost at the end of the name game, the one where each person must recite all of the names of those who have introduced themselves before her. Since I was the last person in the room, I had to go almost all the way around the circle. My brain was scrambled and in no place for rote memorization. After stumbling my way through the names of 20 strangers, I approached my Orientation Leaders to explain why I was late.

Unfortunately, after a cursory check of the list it appeared that my assigned orientation group was elsewhere, and this group had not the slightest idea who I was. I spent the rest of the day a few steps behind, a few minutes late, a few doors down from where I was supposed to be. At that point, all the advice I had been collecting from family and friends seemed to dissipate, and I found myself finally surrendering to the unpredictable and uncontrollable nature of the orientation process. That was when I finally started enjoying myself. 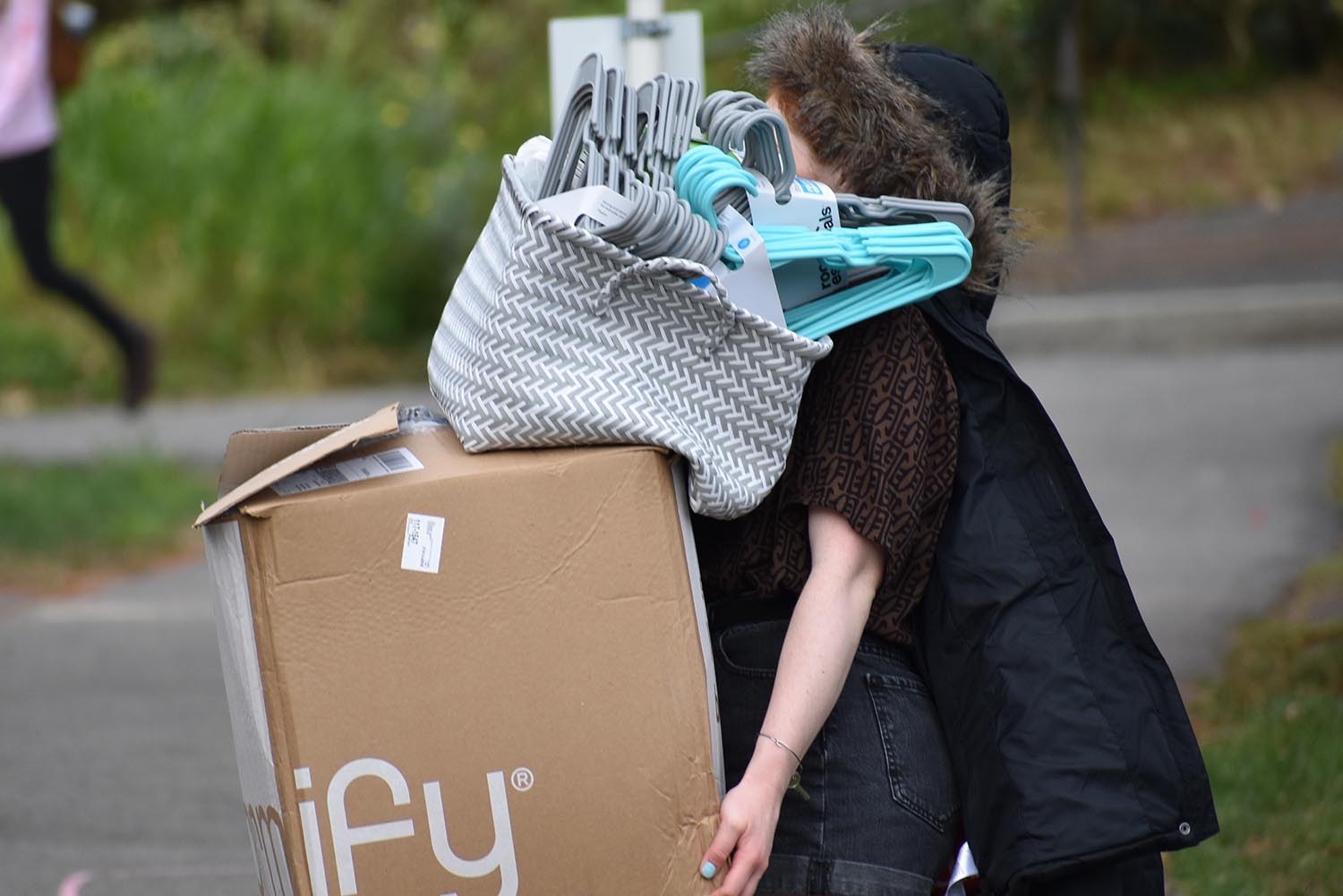 This year, after the lectures in Beckham Hall about student life resources, the parents and I moved into Memorial Chapel, where we heard Vice President and Dean of Admission and Financial Aid Nancy Meislahn discuss the merits of the incoming class, which was brought together from over 13,000 applicants.

“Now the fun really begins, as each of [the new students] begins to get a sense of what each of these individuals brings to the community,” Meislahn said. “They are superb. Academically, by all traditional measures, they are as good as it gets…. To remind you of what I know, you deserve to be very proud of your sons and daughters for all they have accomplished.”

Meislahn went on to talk about the outside-the-classroom values that the new class brings to campus as well, citing brief quotes from letters of recommendations that made more than a few parents in the audience dab their eyes. Next, they listened to Vice President of Student Affairs Mike Whaley and President Michael Roth ’78 give advice on how to be good support systems for their children and how to encourage them to leave their intellectual comfort zones in pursuit of a more mind-opening liberal education.

Advice is a tricky business in the beginning of a new experience. After asking dozens of Residential Life student employees, parents, public safety officers and siblings for their advice to first year students throughout the day, I realized that the entire act of advice giving for big life milestones—like the transition to college—is almost certainly more gratifying for the advice-giver than for the advice-recipient. I am not writing this to sound cynical, nor am I suggesting that people who give advice are doing so in a selfish fashion. I rather think that how we give advice to those younger than ourselves has to do a lot with the process of confronting our younger selves. Giving advice is a form of support, a way to let people know that they are not alone in experiencing discomfort with change. If we were able to go back in time and imbue our younger selves with the knowledge we know now—the knowledge that the friend group we make during orientation may not last forever, the knowledge that opting to stay in instead of heading to a random Fountain party is not the end of the world, the knowledge that it will all be okay—we could probably avoid a fair amount of pain and discomfort.

But with experiences like going to college or (I imagine) getting married or having a kid, most advice falls flat compared to lived experience. This is possibly why these events are deemed milestones: They involve change that we have not yet found a way to make easy. Much of the advice parents and upperclassmen give new students on the first day of college is truisms that were perhaps not even accurate when our parents relayed them to us, yet we repeat the same musings because, even after going through the experience, we do not have anything more helpful to say. Everyone is bewildered at aging and leaving and changing, none more than the family members who have been watching us all along. In these circumstances, maybe what the advice actually seems to signal is that there is a path through the challenge in front of us, that one way or another, we will all figure it out.