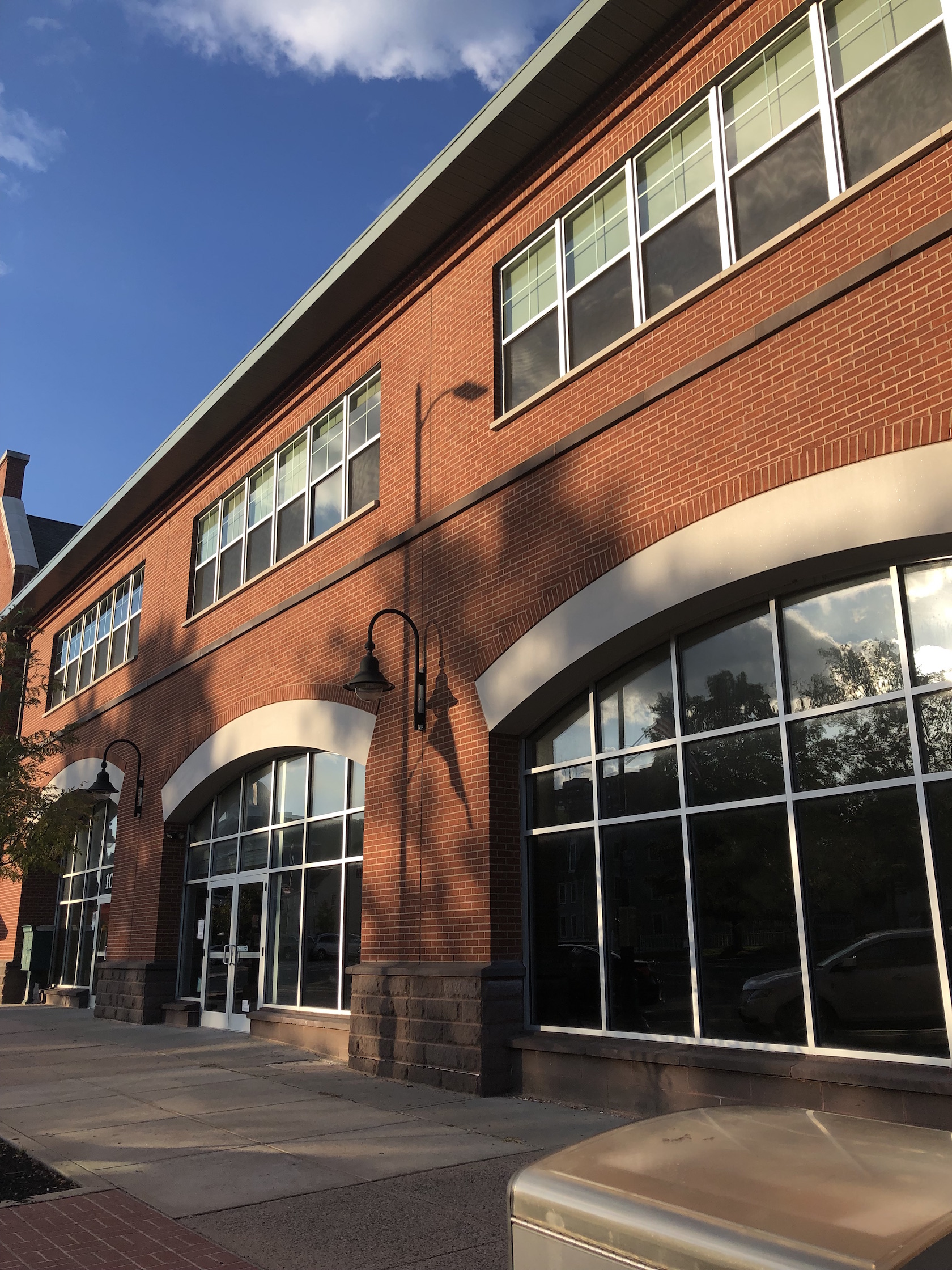 In late June, Carly Blue ’22 led a rambunctious group of summer squash campers down the hill from the Butterfields to the Rite Aid that once anchored Middletown’s Main Street. After a long day of training, the campers were exhausted to the point of incredible irrationality and disobedience, focused only on the promise of sugary treats and salty snacks in their future.

Blue was the first to reach the door of the Rite Aid, but something seemed off. The usually bright windows were dim, no customers streamed in or out, and, sure enough, the door itself was locked. Thinking on her feet, and fearing for her job, Blue directed her young charges down the street to Froyo of Middletown. Luckily for Blue, this dessert spot was still open in June, though it has since closed its doors for good.

Ben Lefkowitz ’20 said he had a similar experience on a recent visit to Rite Aid, when he walked down to Main Street with a friend to pick up some household items for the beginning of the semester.

“I tried to open the door, but it was locked shut,” said Lefkowitz. “Looking inside, the entire store was stripped away. It was a bit of a shock.”

The Middletown Press reported that the Rite Aid on Main Street closed permanently on May 20, due to competing pharmacy Walgreens’ acquisition of the company. The Press explains that Walgreens bought out Rite Aid for $4.4 billion, causing 1,932 Rite Aid stores across the United States to shut down.

Middletown’s Rite Aid specifically closed because of its relative proximity to an existing Walgreens, on 311 E. Main Street. According to a sign on the door of the old Rite Aid, all prescriptions have been transferred to the Walgreens.

As it turns out, Rite Aid and Froyo of Middletown aren’t the only two stores on Main Street that have closed this summer: Subway, First and Last Tavern, and Mexican restaurant Iguanas Ranas also shuttered their doors for good. Ron Meehan ’21, who works as the Director of Field Operations for Middletown mayoral candidate Ben Florsheim ’14, said that the closings are related to an upward trend in Main Street rent prices.

“The contracts to lease the buildings on Main Street came up for renewal recently, and due to increasing rent prices many businesses decided to leave,” said Meehan. “One of which was Iguanas Ranas—a family-run restaurant that had been in service for over 10 years and had meant a great deal to the community.”

Meehan added that a major component of Florsheim’s mayoral campaign is downtown development and that the candidate aims to make Main Street a place that attracts both retail stores and family-owned businesses.

For many Wesleyan students, particularly those who relied on Rite Aid for medication, the turnover of businesses on Main Street poses a dilemma. The Walgreens on East Main Street and Washington Street are at least a 20- or 25-minute walk from campus along heavily trafficked roads.

Blue said that for the rest of the squash camp, she and the campers relied on Neon Deli to supply snacks, Gatorade, and other day-to-day items. However, this was only a temporary solution.

“It’s frustrating that there isn’t another walkable place to buy food and necessities,” Blue said. “Neon Deli isn’t a great substitute for a full pharmacy.” 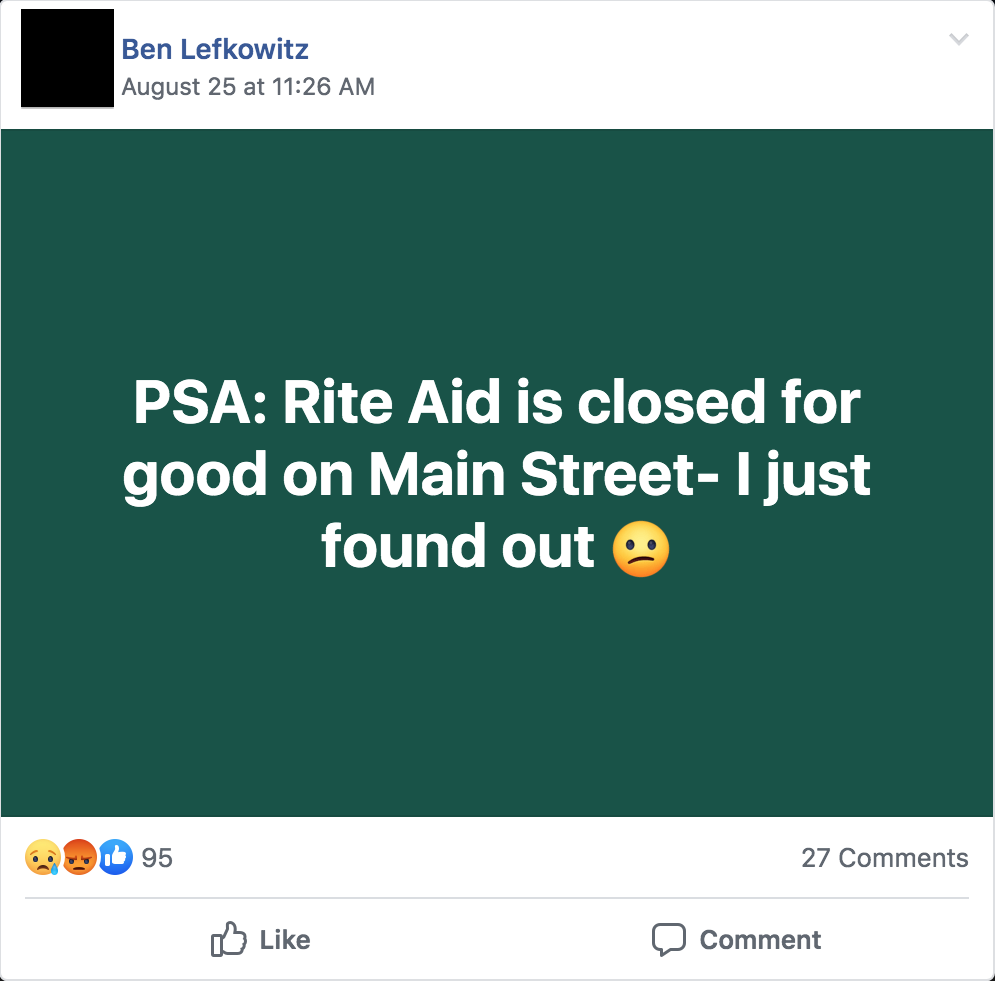 As students begin to return to campus, the lack of a local Rite Aid is already throwing a wrench in people’s shopping plans. Several students took to Facebook to notify their peers of Rite Aid’s closure, posting in WesAdmits about the inconvenience. Lefkowitz broke the news in a post which reads, “PSA: Rite Aid is closed for good on Main Street – I just found out,” followed by a distraught-looking emoji.

The post had racked up 95 reactions and 27 comments at the time of publication. Commenters on the post pointed out that, without a pharmacy in walking distance, students will have trouble filling and picking up prescriptions, as well as obtaining some of the more basic household items that the pharmacy sold.

One student who commented on the post, Gad Licht ’20, was willing to further explain his frustration about Rite Aid’s closure.

“Students, when sick, don’t want to walk that distance,” Licht said. “Now I have to rely on a friend if I’m sick, borrow a car, or take a long walk. This will hurt sick Wes students the most and make us rely heavily on others or go through complicated processes.”

Unfortunately for students, there is no indication as to which store will fill the space of the vacant Rite Aid. In the meantime, students will have to turn elsewhere for their medication, Gatorade, and Flaming Hot Cheetos-related needs.