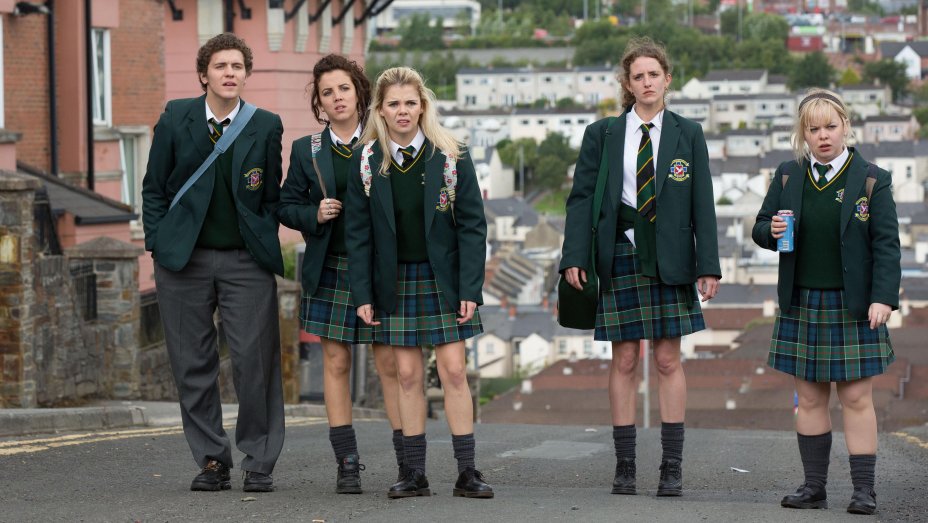 “Nobody good ever comes here because we keep killing each other!”

This line—spoken by frustrated “Derry Girls” protagonist Erin (Saoirse-Monica Jackson) to explain why the concert her mother is forbidding her from attending is a once-in-a-lifetime opportunity—is emblematic of the entire show, which mines a surprising amount of humor from its bleak setting. The second season, which was originally broadcast on the British Channel 4 and released internationally on Netflix earlier this month, is set during the 1990s in Derry, a city near the border of Northern Ireland. This places it in the midst of the political violence of the Troubles, the ethno-nationalist conflict over the fate of Northern Ireland that lasted from the late ’60s until the Good Friday Agreement of 1998, but “Derry Girls” is less concerned with politics than with the trials and tribulations of adolescence. The show is centered around Erin and four of her friends (the titular Derry Girls): her spacey cousin Orla (Louisa Harland), their high-strung classmates Clare (Nicola Coughlan) and Michelle (Jamie-Lee O’Donnell), and Michelle’s cousin James (Dylan Llewellyn), who is an outsider not because of his gender (being a Derry Girl, as Michelle points out in the season finale, is a state of mind) but because he was raised in England.

Every episode of “Derry Girls,” which clocks in at under 25 minutes, is a masterclass in controlled chaos. Each one deals with a different one of the girls’ escapades—like sneaking out to attend a Take That concert or accidentally distributing hash-laced scones at a relative’s wake—and essentially stands alone as a complete story. The show gleefully escalates events until pandemonium erupts; the girls’ attempt to get out of taking a history exam ends with them in the news for attempting to scam the Catholic Church, while a peace initiative meant to foster friendship between Catholic and Protestant youth ends in a fistfight with a local Protestant boys’ school.

“Derry Girls” eschews an overarching narrative arc in favor of fleshing out a believable fictional world. One way it accomplishes this is by filling that world with specific details which will be familiar to any viewers who grew up during the ’90s (jokes about Macaulay Culkin), in Ireland (deeply unflattering Catholic school uniforms), or both (a soundtrack heavily featuring The Cranberries). But even viewers who can’t relate to the setting of “Derry Girls” will find plenty to relate to in the antics of its characters. Jackson’s performance as Erin stands out thanks to her ability to contort her face into increasingly cartoonish expressions of horror and indignation, but her castmates—from rebellious Michelle to neurotic Clare—hold their own as well. Even relatively minor characters, like the girls’ sardonic, long-suffering headmistress Sister Michael, prove memorable enough to spawn their own Twitter reaction GIFs.

I realize that what I’ve described thus far is just a typical—albeit particularly well-executed—comedy about teenage shenanigans. But where “Derry Girls” truly sets itself apart is in its treatment of the political upheaval surrounding its protagonists. The violence of the Troubles is certainly evident in the show, but serves mostly as a backdrop for more mundane topics like school and boys. In some instances, it’s even a source of humor, as when the girls sneak a suitcase full of vodka onto a bus and then deny any knowledge of its origins to Sister Michael, leading to the suitcase being removed by a bomb disposal squad. This lighthearted treatment of a relatively bleak era may be unconventional, but it’s also an accurate portrayal of the myopia of adolescence, when insignificant events like school dances take on earth-shattering importance.

One of few moments in “Derry Girls” that places the political situation front and center is the first season’s masterful final scene, which juxtaposes the girls dancing exuberantly at a school talent show with Erin and Orla’s family watching in stricken silence as news of a bombing that has killed 12 people plays on television. It’s both a poignant reminder of the brutality surrounding the show’s protagonists and a celebration of their irrepressible spirit. Without going into too much detail, the second season ends on similar note, with the girls celebrating their friendship together as a historical event unfolds nearby. Taken together, the scenes spell out a clear message: Governments may come and go, but teenagers will always be teenagers.