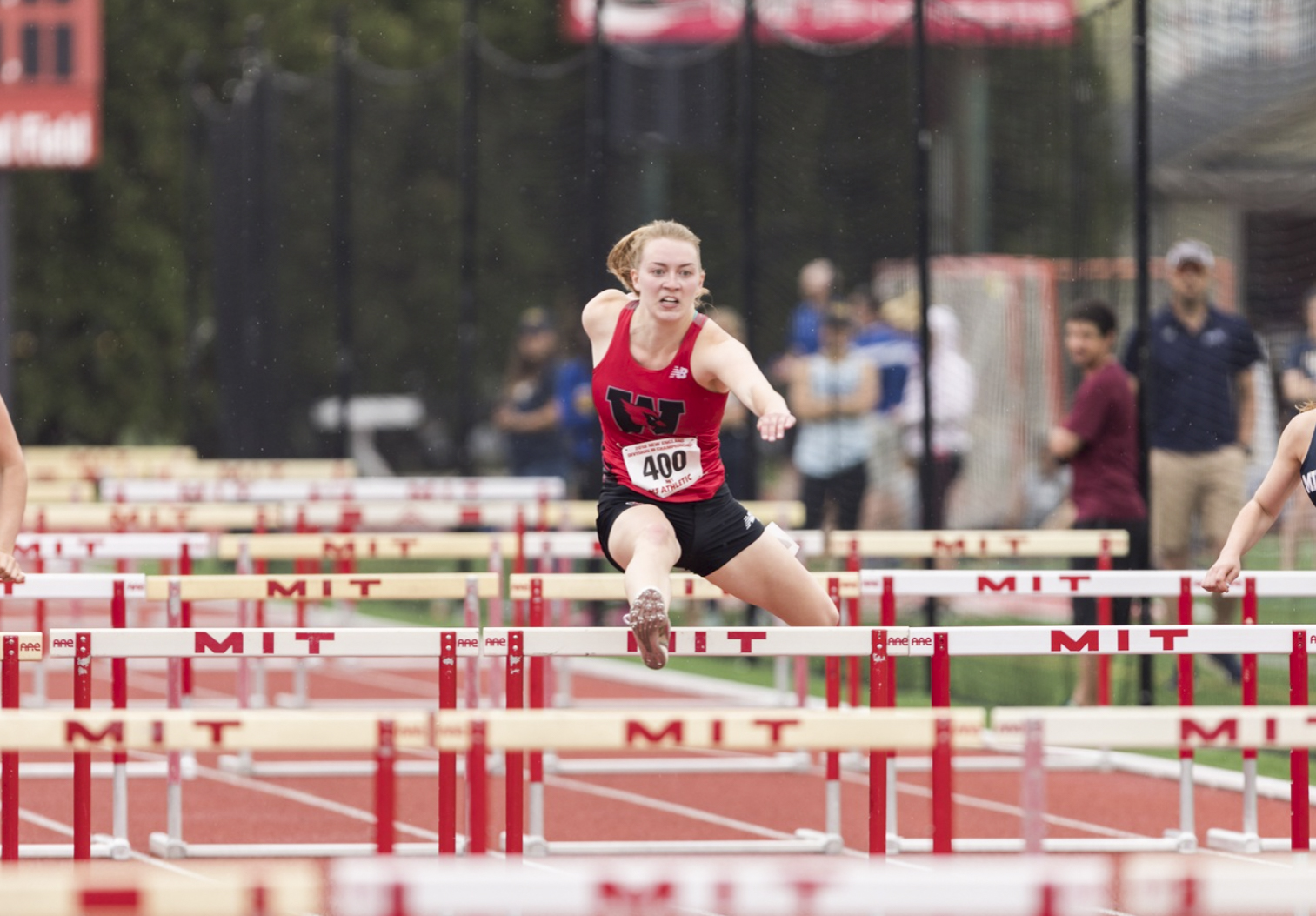 While other students were getting ready for their various formals and end-of-year events last weekend, Wesleyan’s track and field teams were donning their uniforms for competition. The racing, jumping, and throwing Cardinals traveled to compete at the New England Division III Championships in Williamstown, MA. 34 women’s teams and 31 men’s teams from across the Northeast competed at the event, including familiar foes such as Amherst, Williams, and the rest of the NESCAC, save for Hamilton.

Leaping events fared similarly for Wesleyan. Junior Tara Peng had a rough performance in the high jump, going unranked after recording a no height (failing to clear the bar). Fortunately, she rebounded in the pole vault, placing 23rd with a height of 2.91m. Senior Allegra Fils-Aime came in ninth in the long jump with a distance of 5.13m.

Some highlights for the Red and Black included the performances of Ivie Uzamere ’21, who placed third in the hammer throw with a throw of 49.39, and fellow field event victor Katie Maehl ’19, who placed fourth in the Heptathlon with first-place finishes in the javelin and shot put portions of the event.

Despite her strong finish, however, Uzamere was left feeling disappointed by her performance.

“I only practiced once that week because I was not feeling great, and I think that it showed during my series of throws,” said the Nationals invitee. “I was not as energized, relaxed and aggressive as I normally am during competition. I definitely used that experience as a learning moment and it really stressed the importance of giving it all you got even if your mind and body is not where you would like it to be.”

For the men’s team, the highlight of the weekend was Andrew McCracken ’19. The senior was the top finisher in the pole vault with a height of 4.76m, securing ten points for the Red and Black and soaring over the second-place finisher by a tenth of a meter. McCracken gave the University its only first-place finish of the weekend.

While the running events brought a mixed bag of results for the Red and Black, the men’s team performed comparatively better in leaping and relay events. Besides the aforementioned victory by McCracken, the Cardinals also snagged third place in the 400m hurdles, as sophomore Kevin DeLoughry finished with a time of 54.33. Wesleyan took fourth place in both relay events, as the 4×400 team (DeLoughry, Denny, Maristany, Roberts, and Noah Olsen  ’22) and 4×800 team (Ethan Walker ’22, Alexander Blaylock ’22, William Bajohr ’20, and Van Inwegen) took home five points apiece. Rounding out the day was Nick Carulli ’22, who came in 25th in the Long Jump (6.03 meters).

Overall, the teams finished in the middle of the pack. The women’s team, scoring 15 points overall, finished 17th, while the men’s team came in 10th with a score of 29. Winning the women’s events was the home team, Williams, as the Ephs scored 111 to seize the day. The most impressive program performance, however, belonged to the Massachusetts Institute of Technology. The Engineers blew the other men’s teams out of the water to take first place by 50 points, while simultaneously finishing in second in the women’s bracket. Middlebury and Bates also had strong performances, finishing in the top ten in both divisions. While the Cardinals couldn’t quite top Williams, Wesleyan superfans can rest assured knowing that the team managed to finish atop of Amherst for both the men’s and women’s events.

Moving forward, Uzamere believes the mental preparation of the team is a place of potential improvement for the 2019-20 season.

“Track and field is a very long season, we compete all year round, so I was super proud of the team,” Uzamere said. “We left it all out on the track and field and got some great performances. I think next year, we need to work on (including myself) getting our mindsets to a better place and developing this really strong confidence that we can beat any team that comes before us.”