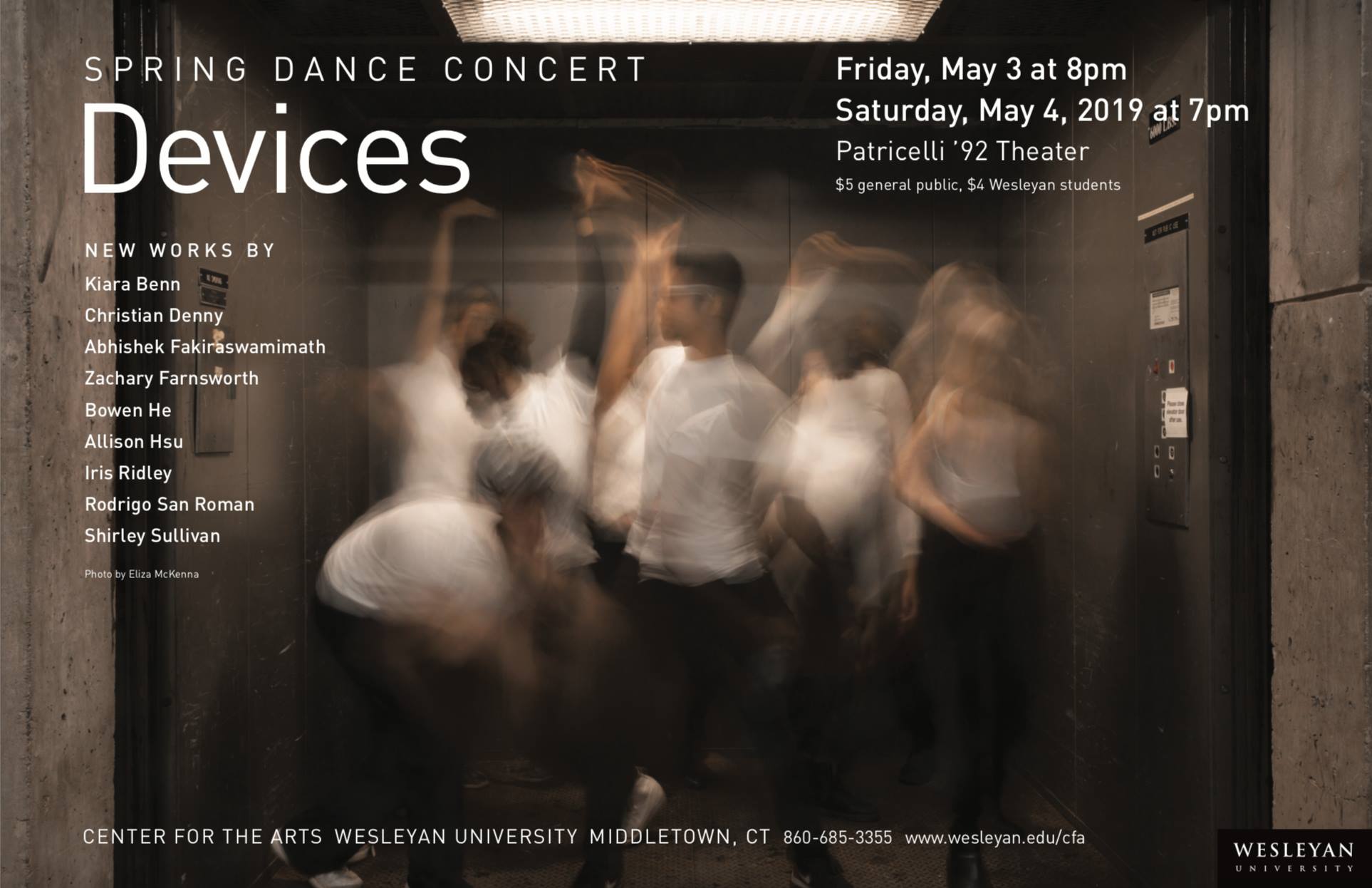 This past weekend, seven students presented the culmination of a semester’s worth of work at the Spring Dance Concert. The performances, which were choreographed by Shirley Sullivan ’21, Allison Hsu ’19, Rodrigo San Roman ’20, Zachary Farnsworth ’21, Kiara Benn ’20, Abhishek Fakiraswamimath ’20, and Iris Ridley ’20, incorporated diverse themes ranging from cultural background to the power of physical touch.

“The idea for the piece originally was on the ‘in between’ and feelings of ‘enough,’” Sullivan explained. “But as I started working with the dancers, the piece began to have a life of its own, so I essentially let it do what it needed. By the end of it, it felt as though it became more about ancestry and family, which is something that I hold dear to my heart.”

These topics became even more explicit halfway through the piece, when the soundtrack switched from music to a recorded monologue from the movie “Selena,” a biopic of Tejano music star Selena Quintanilla-Pérez. The speech, given by Selena’s father, describes the difficulties faced by Mexican Americans, who are expected to display the same level of commitment and competence in both Mexican and American culture. As the dancers moved in sync with the spoken dialogue, the themes of duality and cultural background surfaced through the piece.

“I decided to use the excerpt as part of my piece because I had grown up watching the movie Selena and felt like I related to the text a lot, growing up Puerto Rican in America,” Sullivan said. “The text excerpt was the chance for me to tell my story, and it is a story that I feel many people can relate to growing up here.”

Hsu’s piece, “com(e)fort(h),” featured dancers Camille Britton ’20, Maya Karp ’19, Katie Lowen ’19, Michael Montoya ’20, and JC Pinales ’20 and focused on the idea of care, both for oneself and for others. The piece placed emphasis on touch and contact between people as a source of healing and communication, and Hsu’s choreography involved a great deal of interaction between dancers. The dancers, constantly lifting, leaning on, and otherwise physically touching each other, generated an overall sense of interdependence throughout their performance.

“The major theme I’m working with in my project is care, and my dancers and I have been working to explore dance/movement as a process of healing,” Hsu wrote in a paper about her piece. “Initially, I wanted to focus on the idea of interdependence and the way that care manifests within communities through touch, but after having the opportunity to work with my dancers in a number of rehearsals, I have expanded this idea to not only caring for one another/being cared for but the concept of self-care and the ways in which we care for our own bodies.”

San Roman’s piece, “Journey,” reflected the choreographer’s interest in the concept of pathways and the different routes different dancers might take.

“After taking a few dance classes, I have found that I am always captivated by one particular theme,” San Roman said. “This theme is pathways—how you move around the space when dancing. I simply find it very interesting how the pathways dancer take can be so unique amongst different dances. It is mind-blowing to think how symmetrical, crazy, or repetitive pathways can be.”

San Roman chose to explore the idea of pathways specifically through ballet-based movements. All the dancers in the piece—Beatrix Roberts ’22, Harriet Winterlich ’22, and Sanni Zhang ’22—had some past ballet experience, giving them the technical skills to perform an intricate and physically demanding routine.

“I knew I wanted to do a dance that revolved around pathways, but I needed a subsidiary theme to create movements around,” San Roman explained. “This main subsidiary theme is the dance forms of ballet. I love how these movements can be very flow-y, smooth, and skill intensive.”

Farnsworth’s piece, “Your Average Translation,” was immediately notable in its lack of traditional music. Instead, dancers Gabrielle Baba-Conn ’22, Alea Laidlaw ’20, Katerina Ramos-Jordán ’21, and Jeremy Sherman ’22 made all the noise that accompanied their dancing themselves, adding a slightly surreal edge to the performance and blending the boundaries of sound and movement.

“This semester I began exploring different ways of making sound in dance with my dancers,” Farnsworth said. “I gave them different improvisational scores and prompts, and they explored how to make sound and move at the same time. For example, one prompt was to have a ‘newscaster’ describing the movement that was happening in their partner while they improvised. ‘Left leg swing, bend legs, jump, forwards lunge.’ This was meant to be as literal as possible. No metaphors or qualities…. It became a mixture of improvisation and choreography pretty quickly. The dancers contributed their own themes to the movement, but I let these themes interweave and propagate so that it would never be just about ‘XYZ’ thing.”

Benn’s piece, “tempo take me…,” featured only two dancers—Abby Frazee ’22 and Emma Powell ’21—and dealt with themes of memory and reflection.

“My dancers created solos with the inspiration of music that evoked memories involving reflection,” Benn said, explaining the process of choreographing the piece. “Originally their solos were set to music chosen by them. But over time these solos began to merge together. Instead of two separate songs, I found a song that displayed the connection of music to reflective memories.”

“I had no idea or vision of what exactly my piece was going to look like when I started off because a huge part of my choreography was going to come from the dancers themselves,” Fakiraswamimath said. “So as I understood how my dancers moved and their own personal experiences, my choreography changed with time. But the way my final piece turned out to be was something that I’d never imagined.”

“I was initially ruminating on ideas of pressure—both external pressures [such as] from peers or social media and internal pressures [such as] anxiety or compulsive thinking,” Ridley said. “Then, as my rehearsal process developed, I used free writing prompt exercises with my dancers to consider subsidiary themes like body image and group relationality. The work really started to develop in the very vulnerable, open and honest conversations I began to have with my dancers about these topics. Simultaneously, I started to improvise in the studio, and developed choreography that was inspired by my thinking about and feelings related to these topics.”

This closeness and shared vulnerability between choreographer and dancers is evident in the performance, which has a sense of intimacy and collaboration.

“I wanted people to come away from seeing my dance with their own views about what the piece meant,” Ridley said. “I didn’t want the piece to convey a totally clear or linear narrative, but I wanted it to stir feelings within the audience, and I hope some of that came across!”