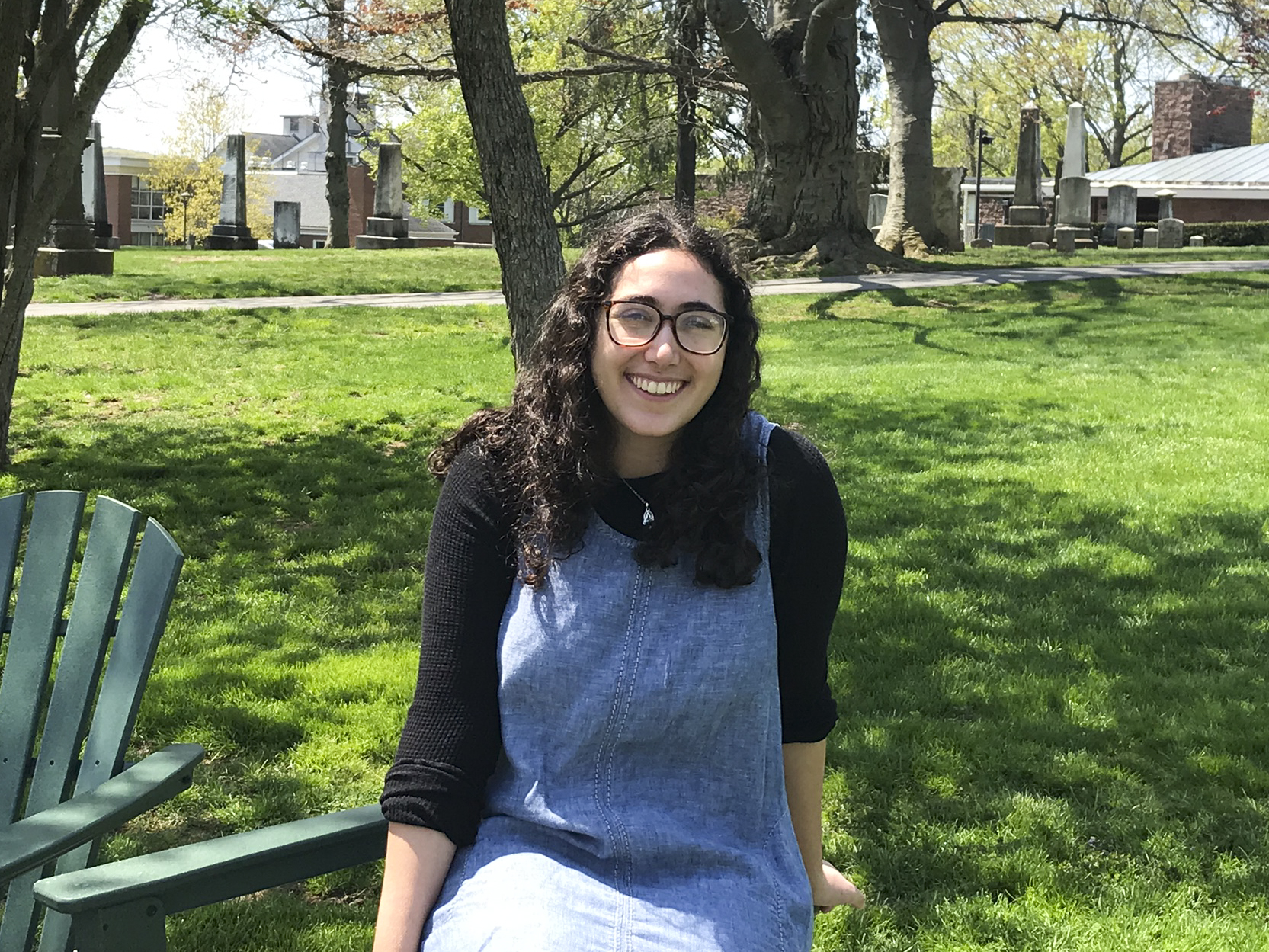 If you haven’t gotten to know Joy Feinberg ’19, you’ve been missing out. As an active member of the Wesleyan Jewish community, a former member of WeSLAM, and a recent thesis writer, Joy’s friendly face does not go unnoticed here on campus. The Argus sat down with Joy to hear more about her experience with the Jewish community, her most embarrassing freshman memory, and the things she’s looking forward to checking off her bucket list before she graduates.

Joy Feinberg: I have no idea! This is the biggest mystery. I feel like Wesleyan has, like, all these little pockets of communities. In the community that I’m in, it makes sense, but when I look at this whole large school and the many communities I’m not a part of, I’m confused again. I’ve never been to a party at baseball house so I don’t know how I ended up here, but it’s fine. That seems like the standard of what makes you a WesCeleb.

A: We hear you’re really involved with the Jewish community here at Wes. Can you tell us a little bit more about that?

JF: There’s two Jewish organizations I’ve been involved with here on campus. I’m on the board of both, which I think has been a really fun and exciting opportunity. I grew up Orthodox, and that wasn’t really accessible here. What’s been really amazing about the past four years is getting to be involved in different communities that are quite different than they way I grew up. I’ve been on the Chabad board for four years, which has been wonderful. I’ve been on the Wesleyan Jewish Community board—this is my first year being on the board—but I’ve been active in the community since I was a freshman. I do educational programming for them. That has been the best, because this year especially, I was doing educational programming for both communities, and I got to keep trying to figure out ways to force everyone to be in the same room as each other and hang out with mixed success. I think the thing that we’ve had the most success with are the Onegs. An Oneg is a Jewish song-based event. Everyone gets together in one location, and you sing all of these community songs, and it’s just this beautiful way to connect with Jewish practice that doesn’t look like a ritual, which can be very different based on the way you grew up. It isn’t about food, either, which is another thing that isolates people, and it isn’t based on your learning background. It’s just a really pure way to connect, and it’s entirely fun. That has been my most successful endeavor in forcing the Wesleyan Jewish Community and the Chabad community to hang out together.

A: Do you have a favorite memory from your years working with Chabad and the Jewish community?

JF: I have two. One is so classic. I very strongly feel like Jewish communities should not be built around mourning together, because that is so common with minority faith communities. That being said, I think one of the most important things that happened to me was this past year, when there was the shooting at the Tree of Life Synagogue in Pittsburgh. I didn’t find out about it through the news because I don’t read the news on Shabbos, so I found out through word of mouth. That evening, the Bayit held this beautiful ceremony, and that was beautiful I think because it was amazing to see how many people came to find strength in each other. It was really beautiful to stay until the very end, and see who came and who left and who stayed, and the experience of sharing pain and joy together was beautiful.

But, I wouldn’t call that my favorite memory because it’s too sad. I think my favorite memory was probably one of the Onegs. They’re always the best. The first Oneg we did, I was so nervous, because an Oneg does come from a pretty religious tradition. I didn’t know if people would be too intimidated to come, or if it wouldn’t interest them, or they wouldn’t feel like they had ownership over the space, or anything like that. But, we did it in a senior’s house, and we expected there to be, like, twenty people, but we had something like 40 or 50 people coming in and out. One person would leave and five more people would come in after them. Everybody was just having an amazing time and was so glad to be there, and sharing stories and songs from their communities. This whole time at Wesleyan there has been this fantastic passionate community looking for a chance to connect with each other, and it was wonderful.

A: What else are you involved with here on campus?

JF: I did WeSLAM for three years, and it’s kind of wild that I’m not doing it this year. That was a huge part of my Wesleyan career. That’s actually probably how a lot of people who aren’t Jewish know who I am, because I would just get on stage and say really personal things about myself. That was amazing, and coming in as a freshman and having no confidence, the poetry and writing community here is so amazing and so welcoming. They taught me that my voice was valuable and what I had to say was worthwhile, and really reminded me that I can help empower other people’s voices. I think I had a really wonderful time building art on campus. This past Thursday, we had a Multi-faith Open Mic, so having a chance for people who had a relationship with faith, or no longer have one, inviting them to come and share their art with the community. That was a combination of my two loves, and that has been really really fun.

A: Speaking of writing and voice, we heard you wrote a thesis. Can you tell us a little bit more about that?

JF: I wrote a novel. It consumed my entire year, which was wonderful. At its peak, it was about 500 pages. About two hours before I submitted it, I cut out about 20,000 words, which was terrifying but for the best. I wrote a historical fiction novel about this real person, it’s a renaissance artist named Filippino Lippi. His father’s significantly more famous than he is, but he changed Western art, and has been largely forgotten. He died very young, and was at this very transitional time. He was a student of Sandro Botticelli, and was a very close personal friend of Leonardo Da Vinci. He lived in the realm of these amazing geniuses, who all, in their own personal writing, was like, Filippino Lippi was better than any of us. And yet, we’ve really forgotten him. My theory, mainly what this book explores, is that he was living a very good and happy life, and we as a culture really reward artists who lived this tortured and painful, unsatisfying life, and we love their art and abandon them as people. People loved him when he was alive, and he was very successful and interesting, and I think that’s a narrative that we don’t raise up. That was the goal of the book, to be like, you don’t have to be suffering to be good at art.

A: What’s your most embarrassing freshman year memory?

JF: Oh my god, I have so many. This isn’t a specific memory, but it’s just a general thing that I look back and cringe on. I came from a very closed community, and in my high school, I was the most liberal person, and then I came to Wesleyan, where everyone was just more well-versed and more educated on these issues. I think my freshman year was a series of me saying all the wrong things all the time, and thinking that I knew was I was talking about. I think I look back and I’m just so embarrassed about how smart I thought I was, and how much I thought I knew, and how ready I was to try and tell people things, knowing nothing and being an absolute child. But it was a good learning experience and it definitely taught me that if you think you have information, it doesn’t mean it’s appropriate for you to say it and give that to other people.

JF: Most of them were trying to finish my 500-page novel, which was definitely a choice that I made with good and bad consequences. Since my thesis has been sent in, I’ve been living this life of endless time. My housemate and I are going on adventures; like, we’ll go to New Haven, or go on a hike, or find a new part of campus we haven’t seen before. We’re trying to motivate each other to go out and explore, and to be out in the sun a lot. It’s really nice. I finished The Office for the first time, which is very exciting. That was the series that got me through thesis, and I would always tell myself that if I wrote a certain number of pages, I would reward myself with an episode, and so you can see how little self-control I have because I somehow finished nine seasons.

A: Anything to check off the bucket list before you leave?

JF: It’s not crazy at all, but I really want to see the sunrise from Indian Hill. But now that we’re in spring, sunrise is 5 am, it’s not going to happen by me waking up to see it, so I think that I’m going to have to stay up and see it. That’s a hope, a dream that I’m working towards.

A: Excited for senior week?

JF: Yes! I love my house and everyone who I live with. In this economy, it’s going to be very nice to live in a house that I have control over for maybe the last time in my life, and not have to go to class and to just be a homeowner. Everyone has all these crazy plans and I’m just excited to live in a home and be a homeowner for a week with no other responsibilities.

A: Do you have any advice for other Wesleyan students?

JF: I think the thing that I should’ve heard earlier was just that you’re going to change so much here, and not even necessarily in ways that you recognize. That change is possible if you’re okay with being open and vulnerable, and it means having difficult conversations, and it means being embarrassed sometimes, and it means that you’re not going to be the smartest person in that space the whole time. If you leave yourself open in that way, you’ll really learn more about the person that you’ll become. Be open, and don’t be scared of looking dumb, because that’s the whole point of college. You’re here and you don’t know everything.

A: Anything else you’d like to add to this interview?

JF: I think that it’s okay to be having a good time in college. I think that for a lot of people, college is very difficult and very hard, and that’s not at all to invalidate that experience, but I think that there’s sometimes a pressure for people to have to say that out loud, that it’s difficult and challenging and complicated. And, it can be difficult and challenging and complicated, but if you’re having a good time, there’s nothing simplistic about that. There’s something really wonderful to be said about the fact that you’re enjoying yourself. You don’t have to be embarrassed of that.

Jane Herz can be reached jherz@wesleyan.edu.