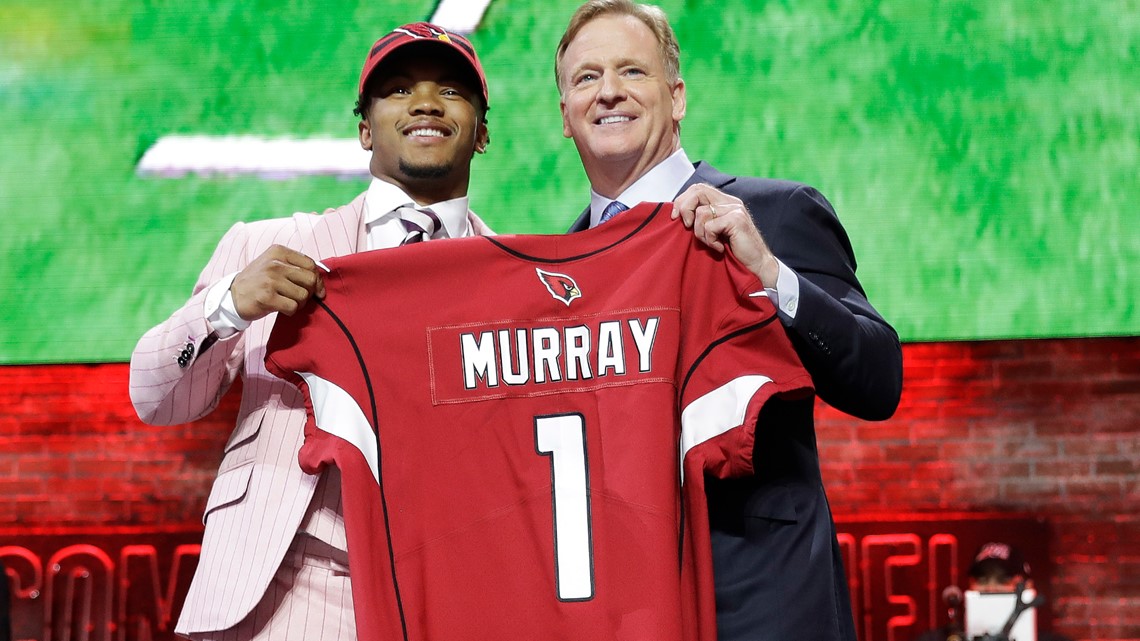 The 2019 NFL Draft was held last Thursday through Saturday in Nashville, TN, and like a true champion I watched every. single. pick. in rounds one, two, and three. As such, I can’t think of a single person more qualified to rattle off takes on what happened at the draft, so I’ll be running through some of the teams and picks that I found the most interesting. I’m sorry in advance if I don’t make it to your favorite team: There are 32 teams, only 24 hours in a day, and I don’t care about the Cincinnati Bengals.

Without further ado, here are my impressions of the 2019 NFL Draft.

It was long expected for the Cardinals to take quarterback Kyler Murray with the number one overall pick, and they did exactly that, scooping up the Texas native and Heisman winner at the start of the night. Arizona’s interest was widely known; in fact, current Cardinals coach Kliff Kingsbury tried to recruit Murray to play for him while Kingsbury was still the coach at Texas Tech University. Obviously, Kingsbury still had interest for a reason. Murray is a great prospect, and an excellent fit for Kingsbury’s system. Murray stays calm under pressure, has good arm strength and a quick release, and can throw on the move from a variety of angles, à la former Texas Tech standout Patrick Mahomes. Critics would point to his below-average height for a quarterback (he’s 5’ 10”), but other smaller quarterbacks have thrived in this league, such as Russell Wilson and Drew Brees. There’s no reason to worry about Murray in that regard.

From a pure value perspective, however, I still don’t love this pick for the Cardinals. If Murray is the guy that they think they can build around, this pick is justified; it shouldn’t take Harvard Business School to tell a fan that nothing is more important in the NFL than finding a franchise quarterback. On the other hand, Arizona had just selected a quarterback with the tenth pick of last year’s draft, Josh Rosen. Rosen had a rough first year behind bad coaching and an even worse offensive line, leading the Cardinals to trade him to the Miami Dolphins for a second round pick. This is just embarrassingly low compensation. Not only is the book not completely written on Rosen’s future in the NFL, but it also effectively signifies that they completely wasted their first round pick last year. They should have either gotten more for the former number ten pick, or they shouldn’t have taken Murray at all.

As a side note, I love the Rosen trade for the Dolphins. Miami is acquiring a very young player who remains an excellent prospect and gets most of his salary paid by the Cardinals. If Miami hits on him, they just stole a franchise quarterback for dirt cheap. If not, they can cut him with little financial impact.

I like what all these teams did for the exact same reason: instead of trying to get cute, they stayed where they were and selected stud defensive linemen in the top ten. With the second pick, San Francisco came away with Ohio State defensive end Nick Bosa, brother of current Los Angeles Charger Joey Bosa, and probably the best overall prospect in the draft. The Jets were looking to trade down from the number three overall pick, but ended up selecting Alabama defensive tackle Quinnen Williams instead, a talented run-stuffer and pass rusher. Jacksonville probably came away with the second best pure pass rusher with the seventh pick, after Kentucky’s outside linebacker Josh Allen surprisingly fell to them (fun fact: this is the second straight year someone named Josh Allen was taken with the seventh pick). The Bills took Houston’s Ed Oliver, an explosive, quick defensive tackle who has drawn comparisons to reigning Defensive Player of the Year Aaron Donald.

Oh boy. The G-Men have collapsed into utter chaos ever since a surprise 11-5 season in 2016. Quarterback Eli Manning has lost any talent he once had, but rather than addressing the now glaring hole behind center, the team drafted (the admittedly very talented) running back Saquon Barkley with the second pick last year. Worst of all, general manager Dave Gettleman simply seems to have no coherent plan of how to rebuild. One minute, the Giants are tearing down their roster and collecting assets, as they did when they traded superstar receiver Odell Beckham Jr. to the Cleveland Browns. The next minute they make moves that make no sense for a rebuilding team, such as signing receiver Golden Tate to a multiyear deal.

This time around, the Giants did select a quarterback, but unfortunately they took the completely wrong one. Rather than selecting Ohio State quarterback Dwayne Haskins, a superb pocket-passer who the Giants had been linked to all offseason, they chose Duke QB Daniel Jones, whose biggest college accomplishments include throwing nine interceptions against Virginia and receiving training from Eli Manning’s favorite coach. He only has average arm strength, throws a poor deep ball, and maybe shouldn’t have been selected in the first round, let alone with the sixth overall pick. In any case, Gettleman should have known that Jones would have definitely been available with their next pick at 17, freeing New York up to take a defensive stud in the top ten.

Seattle pulled off a masterclass in draft maneuvering, beginning the process with only four picks, and ending it having traded for the rights to ten players. Their first round selection, defensive end L.J. Collier from TCU, is a nice pick that addresses a recognizable need, but far more interesting is their second pick, Ole Miss wide receiver D.K. Metcalf. Metcalf has blazing straight-line speed and is beyond ripped (his body fat percentage is below 2 percent), but he struggled in the three-cone drill at the Combine, which measures a player’s side-to-side mobility. Once considered the top WR in the draft, Metcalf fell to the second round. He may take on a larger role earlier than expected, however, given recent news that injuries may force Seattle WR Doug Baldwin into retirement.

Many expected New England to select a tight end in the first round to replace the retiring Rob Gronkowski, but the Patriots instead chose Arizona State receiver N’Keal Harry with the 32nd pick. In some ways, however, Harry can actually fill some of Gronk’s role in the offense: He’s a big-bodied receiver with excellent instincts, and seems to come down with every contested catch. He’ll be an instant asset in the red zone. The Pats took Vanderbilt cornerback Joejuan Williams in the second round, a smart player who fits into New England’s scheme, then selected feisty Michigan DE Chase Winovich in the third round. Most interesting was their selection of Auburn quarterback Jarrett Stidham with the 133rd pick. Stidham is a developmental prospect, but he’ll have plenty of time to learn behind Tom Brady.

Owner Dan Snyder isn’t known for being the keenest football mind, so I’m sure that fans in the DMV were nervous when he announced that he would personally run this draft. Interestingly enough, however, Washington actually came away with a nice haul. They took the aforementioned Haskins at 15, a player they considered trading up for, then chose a top end pass rusher in Mississippi’s Montez Sweat, who fell because of medical concerns. Things are looking up in D.C., at least until Snyder finds a way to ruin his franchise again.

The Silver and Black selected Clemson DE Clelin Ferrell with the fourth pick. Many instantly viewed this as a big reach, and it very well may be, but Ferrell is certainly a decent-enough prospect to be looked at in the first round. It will take a couple years to judge this pick, until we know how Ferrell and the edge rushers taken around him develop.

The Raiders actually had three picks in the first round, as a result of the full-on fire sale last season that lead to the trades of star DE Khalil Mack and WR Amari Cooper. Jon Gruden and co. ultimately used these remaining two picks on Josh Jacobs, an Alabama running back, and Mississippi State safety Johnathan Abram. Selecting a running back is always questionable in the first round, so this may be a move Gruden will eventually get criticized for, if it turns out the players taken around Jacobs are better.