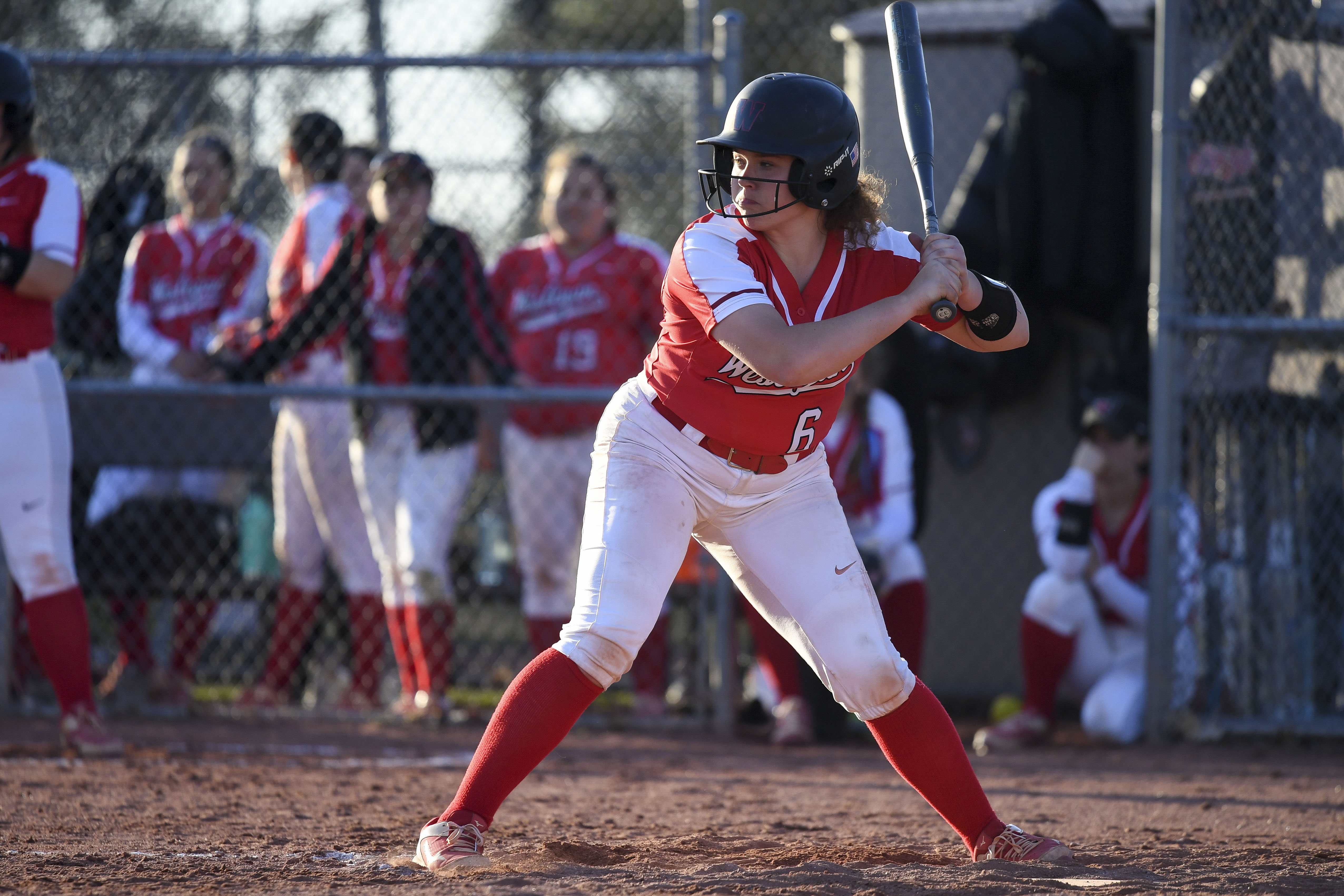 Softball continued an up-and-down season, recently getting swept by Middlebury two weekends ago before beating Mitchell College in a doubleheader the following Tuesday. With play continuing this week, the team went on to split a series against Trinity on Tuesday, April 23. Although the team has a decent record overall at 12-18, Wesleyan is in a deep hole when it comes to conference standings. At 1-8 in the NESCAC West, the Cardinals will have to sweep No. 3 Williams this upcoming weekend and hope that Amherst drops its final three against Middlebury in order to squeak ahead of the Mammoths for the final playoff spot.

The first game against Middlebury on Friday, April 12 was a high-scoring, if one-sided, affair. The Red and Black jumped out to a 1-0 lead in the first inning off an RBI double from Sophia Sciarappa ’22 but fell behind 6-1 by the top of the fourth inning. The Cardinals bounced back, down only 6-4 after right fielder Courtney Collins-Pisano ’22 ripped a two-run double into left-center, but that would be as close as Wesleyan would get the rest of the way. Middlebury scored five in the fifth inning, then smacked pitcher Danielle Rinaldi ’21 for a grand-slam in the seventh. The visiting Panthers would add on four more to emerge victorious by a 19-6 margin. Sophomore pitcher Lauren Gaffney-Gomez took the loss for Wesleyan, allowing seven hits and eight earned runs over four innings.

Fortunately for the team, the next two against Middlebury were far more competitive. The Panthers led for the first five innings of game two, 1-0, until an error while the bases were loaded allowed Wesleyan to tie the game at 1-1. The score would remain constant until the seventh, when back-to-back doubles put Middlebury ahead, 3-1. At second base, Maddie Ikeda ’21 brought the Birds closer with an RBI single in the bottom of the inning, but the Red and Black would ultimately fall to the Blue and White, 3-2. Although Rinaldi took the loss at the mound, she nevertheless managed to record her 100th career strikeout. Wesleyan left fielder Marina Williams ’21 went 2-2, while Ikeda finished 3-4 with an RBI.

Middlebury again jumped out to an early lead in game three after a triple propelled the Panthers to a 2-0 lead in the first. The Cardinals nearly scored in the second after Sciarappa advanced to third, but she was thrown out at home. Wesleyan would earn its first run later on in the fourth inning, by way of a bases-loaded sacrifice fly by Kendall Carr ’19. The Panthers, however, iced the game in the seventh after a two-out, two-run single put them ahead 4-1. Sciarappa again threatened to score in the bottom of the seventh after a leadoff double but was left stranded as the inning ended. The score in the seventh would be final, as Middlebury completed the sweep. Gaffney-Gomez again took hard hits with the loss, although she only allowed three earned runs over six-and-a-third innings.

The Cardinals’ fortunes turned around the next Tuesday in a double-header against Connecticut foe Mitchell College. The contest actually marked the schools’ first meeting since 2006: Wesleyan had previously swept the first and only series against Mitchell 2-0.

In the first game, the Red and Black took a 1-0 lead in the top of the second and never again trailed. Their offensive performance was highlighted by a sequence in the fourth, while the Mariners led 3-2; an RBI by right fielder Alexis Campbell ’22, Rinaldi, and Sciarappa capped off a run that put the Cardinals ahead 5-3. Wesleyan triumphed with a final score of 6-3 after Olivia Gorman ’19 notched a single, stole second, and scored off a single by Campbell to tack on the final run.

Wesleyan again scored first in the second game and never looked back, winning 8-0 behind a dominant performance on the mound by Brenna Monroe ’21 as well as a strong showing by the Cardinal offense. With runners on second and third in the fourth, singles by Gorman and Williams drove in a combined total of three runs. The next inning, Gaffney-Gomez lead off with a solo shot, then watched as her teammate, sophomore left fielder Fiona Skerrett, sent third baseman Kendall Mancuso ’22 home with an RBI single. Skerrett would reach home herself after an error by Mitchell’s catcher, doubling Wesleyan’s score from the previous inning. Rinaldi went yard in the sixth for Wesleyan’s second home run of the day, before sophomore shortstop Alyssa DaSilva capped off the day with an RBI double. The Cardinals sunk the Mariners, 8-0, and remain undefeated against their cross-state foe. Monroe tossed a complete-game one-hitter while fanning five, good for her second win of the season.

Finishing off the action for the week, the Red Birds battered the Bantams in game one of a two-game set against Trinity on Tuesday. Rinaldi put the Red and Black ahead in the first, scampering home on a wild pitch. Trinity scored next inning on a passed ball, tying it up until Wesleyan came alive in the third, scoring four to take a 5-1 lead. The Bantams drew close again, scoring three more runs in the top of the fourth, but only until Wesleyan effectively iced the game in the bottom of the same inning. The Cardinals scored six runs on five hits, as RBI by Collins-Pisano and Williams added insult to the already injured Bantams; Trinity’s pitcher imploded in the bottom of the fourth, walking three with the bases loaded. Wesleyan won its third straight game 11-6. Carr starred for the Cardinals, going 4-4 with a triple.

Sadly, the Red and Black couldn’t keep pace with their cross-state rivals in the second game. Wesleyan started strong, leading 4-0 in the top of the fifth after a triple by Gaffney-Gomez. However, Trinity halved the deficit in the bottom of the inning, before rocking Rinaldi, pitching in relief, in the sixth. The Bantams scored four in the inning, taking the lead after a pair of two-out RBI singles. Wesleyan never threatened again and lost, 6-4.

Overall, the team is undaunted by any struggles and eager to finish the season strong.

The Cardinals begin their final series of the regular season against No. 3 Williams Saturday at home at 2 p.m. and 4 p.m., before closing out the regular season with an 11 a.m. game on Sunday. A sweep of the Ephs, coupled with Middlebury wins over Amherst this weekend, would allow Wesleyan to claim the final playoff berth in the NESCAC West.