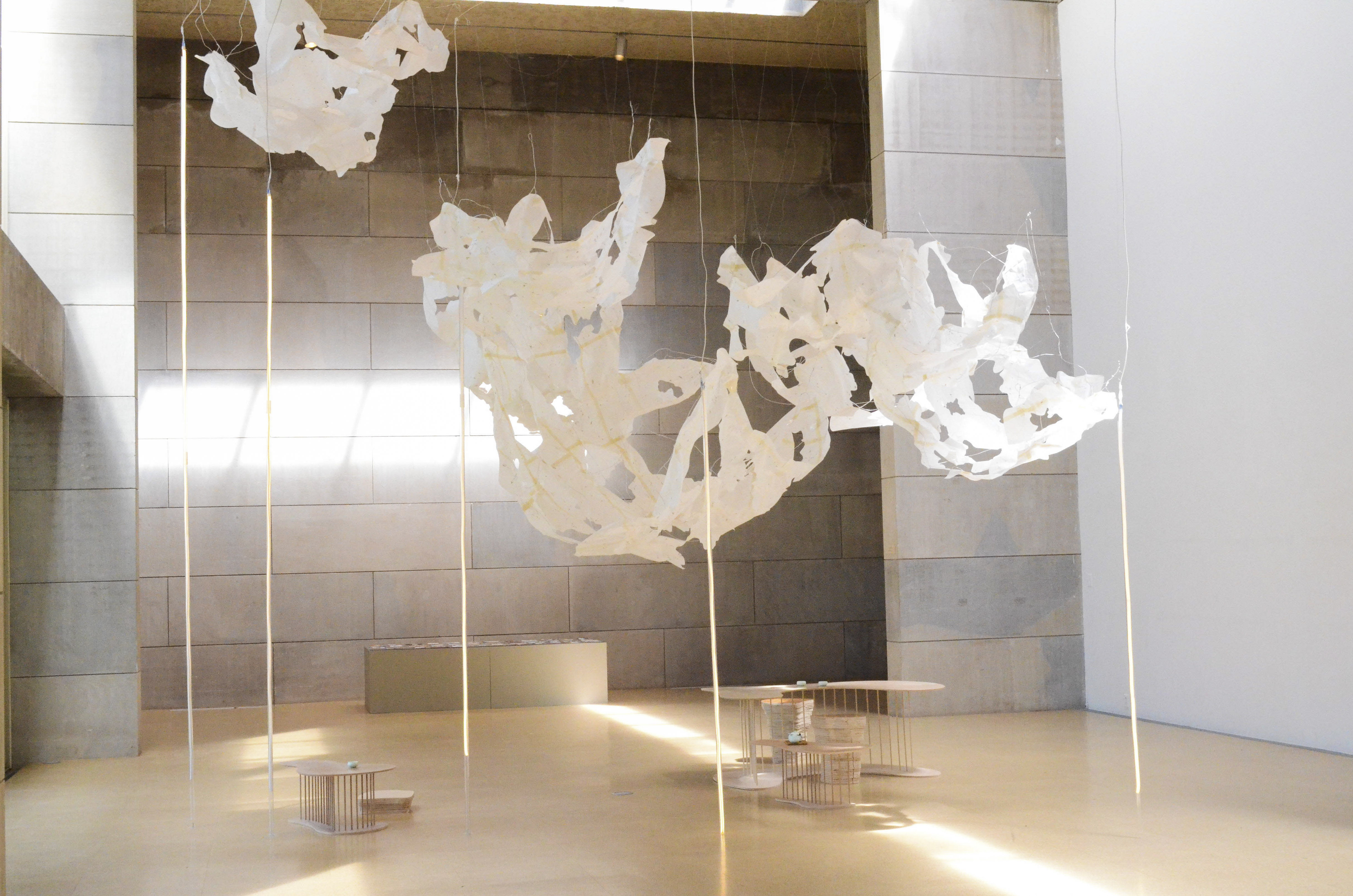 Silverstein’s photography thesis, “a boy will swing from the leaves,” deployed multimedia photography and photo-sculptural works to explore racial tensions in New England. The title is derived from the final line of a Rickey Laurentiis poem, “Southern Gothic.” The subject matter is personal for the artist.

“Through this project, I am interested in rendering a version of blackness that is often called into question,” the description reads. “As a biracial man, I reckon with what it means to have claim to my blackness…. The incorporation of archival family photographs collapse time and space to call attention to an inherited trauma that is passed down through the pigmentation of skin. The stage that New England provides—in contrast to the more overt racial tensions of the South—suggests a comfort that quietly transforms into an insidious violence resulting from the oppressive whiteness of the place.”

The work on display grapples with these tensions, in ways that are both startling and subtle. Suburban homes are a common theme, but they are depicted with subtle details to suggest buried tensions. One home is seen from behind a fence, invoking images of gated communities; another is brightly lit, but surrounded by total darkness, suggesting racial tension through the sharp contrasts in lighting. Other images similarly invoke violence through understated signifiers. One image shows a young woman in a pristine white dress stained by dirt and something red which reads as blood. The contrast between the white fabric and stains implies a threat of violence.

Lobo’s thesis, titled “Karachi,” uses painting to depict the titular city. The paintings include overhead perspectives of cityscapes and other images related to the Pakistani city. One particularly memorable painting depicts a couple, a male and a female, whose bodies and faces are obscured by bright, white paint.

The main component of Freeman’s thesis is a dreamlike, digitally rendered landscape projected onto a large screen. Like a more artistic version of Google Street View, viewers can use a computer located in the middle of the room to explore this landscape. Parts of the enormous virtual world appear somewhat naturalistic, resembling shadowy hills and rock formations, but it is also full of fantastical elements, such as brightly colored tunnels the viewer can navigate through or large, vaguely human-esque statues submerged underwater. Other than a small placard indicating which keys to press to move in different directions, viewers are given little direction and can explore the virtual world however they choose.

Next to the main screen, a series of brightly colored stills from the landscape are mounted on the wall, showcasing the fascinating and varied appearance of the world Freeman has created. On the opposite wall is a large topographic map with a bird’s eye view of the entire landscape projected onto it. This map helps provide a sense of scale to the project and also helps viewers orient themselves and navigate from place to place. Overall, the piece has the slightly surreal feel of wandering through a video game after all the characters have gone home.

Moy Bishow’s thesis, “SOME SUIT,” blends an impressive variety of mediums in a single installation. One component of the project is a short comic book titled “Made My Friends,” drawn by Moy Bishow in crisp lineart. The comic is set in a vaguely futuristic cityscape whose fantastical appearance compliments the slightly surreal story, about a man who attempts to rebuild his old friends by creating a trio of blocky, human-esque suits and putting actors in them.

The blocky figures of the “friends” in “Made My Friends” are repeated throughout Moy Bishow’s piece. There is an enormous figure suspended from the ceiling, and an invitingly pillowy-looking one (which viewers are invited to sit on) lying on the floor. There are even a few outside the gallery, tucked into bushes visible through the windows. The rest of the art in the comic book is also echoed throughout the piece, printed on transparent panels that are mounted on the windows and on a large scrolling panel in the middle of the exhibit.

Su’s thesis, which was untitled, aimed to create a tea room which transcended any particular nationality.

“The concept of a tea room is mostly considered as a Japanese architecture type. The space is usually very exclusive with its ceremonies and procedures,” Su told The Argus. “Yet tea drinking isn’t something only limited to the Japanese. People drink tea from all over the world. There are Chinese teas, even bubble tea and Liptons in a cup. Tea drinking is a quotidian ritual and ceremony for all kinds of different people. Thus, I aim to create my tea room for anyone who drinks tea.”

To do this, Su crafted several wooden chairs and tables, equipped with tea cups. Above that, several white lights and canopies dangle from the ceiling.

“The forest is sliced into three layers: the canopy on top; the trees in the middle, and the cascading river streams and rocks by the river side,” Su said. “And my design is an architectural translation of these three elements. Upon approaching the space, one can see the lit up columns signifying a spatial progression from public to private, from outside to inside. The columns and canopies both horizontally and vertically create a gradient of spatial changes. The bigger space has lowered canopies to form a cozy space for intimate exchange while drinking tea. Whereas the smaller and taller section is a meditative space reserved for one person enjoying tea in more privacy…. From an architectural standpoint, the design seeks to challenge the definition of a room and boundaries. The goal of the space is to unite, not separate, people. Just like the ultimate goal of this tea room is to break down walls and boundary and unite people with some tea drinking.”

Valentin’s thesis, “Proximate Estrangements,” consists of a series of small, colorful paintings arranged in a grid on a raised platform. The paintings resemble old family photos: a group of couples dance around a living room, a family sits at a dinner table, two girls run into an oncoming wave. A few of the paintings are black and white, adding to the impression that they have been plucked from a dusty photo album in someone’s attic. Interspersed among these domestic scenes are occasional closeups of inanimate objects, such as a hand holding a half-eaten sandwich or a houseplant on a kitchen table.

While the exhibit consists of dozens of paintings, each individual picture is small, approximately the size of a postcard. This combined with the works being arranged close together in a single cluster means that the entire exhibit takes up a relatively small amount of room and looks even smaller within the cavernous space of Zilkha. The small scale of the paintings invites viewers to examine them from up close, creating a sense of intimacy that is matched by their subject matter.