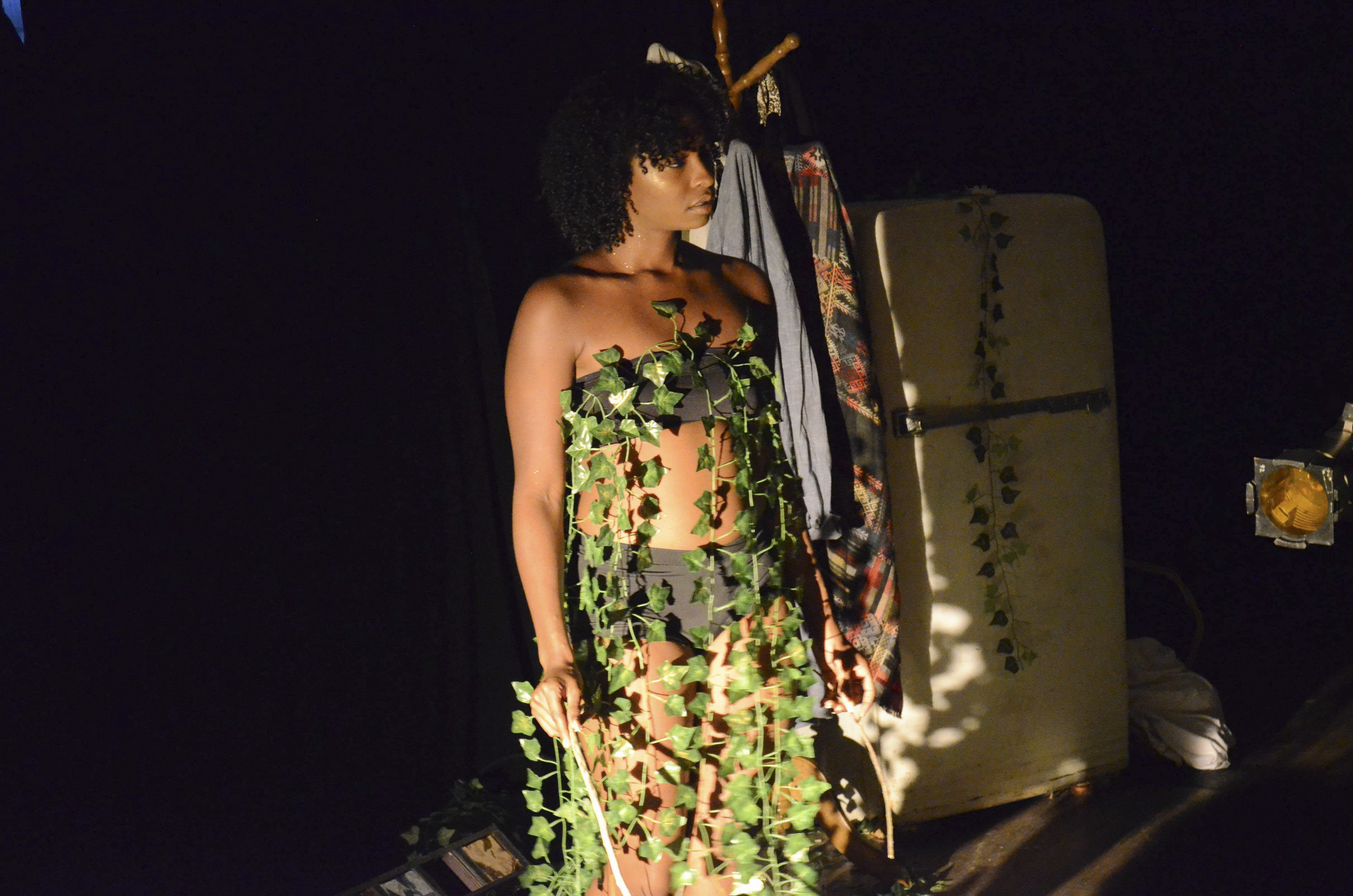 When you see a play, it’s not often that you get to see the beginning or end of existence as we know it. Much less both within the same minute. But that’s exactly what happens in the beginning scene of “Eons” (running April 25-27 in the Malcolm X House Basement), an ambitious yet laser-focused new play by Clarity Bian ’19, in which three simultaneously powerful and yearning women are both creating and destroying the world.

The show opens with three quick scenes, flashes of pain that seem traumatically remembered by a fractured collective. There’s Lucy (Inayah Bashir ’20), a Black woman donning a primordial garment of leaves, letting out a mysterious and ancient sound as if from deep within; there’s Jane (Elizabeth Nefferdorf ’22), a white woman wearing a futuristic robe in a sterilized, fluorescent apartment desperately asking for “help”; and finally, there’s Mary (Uresa Ahmeti ’22), an Albanian woman in a leather jacket, eyes glowing in vengeance, posing the threat: “I’m going to…” before holding a gun to the audience and shooting. These moments, happening one after another, may initially seem disorienting and random, as if the violent non-sequiturs might be meant to evoke pure shock. But as “Eons” continues, these moments begin to build into something much more complex: a devastating portrait of pain across identities, time, and space.

The rest of “Eons” unfolds at a similarly quick pace. Despite being temporally separated by centuries, if not millennia, the three women gather together at a bar to drink, at a table situated strikingly close to the audience. Their topic of discussion is a new crisis: Men are starting to disappear from the earth, dying from some unknown condition referred to as a “wave,” “a curse,” and an “unknown disease.” Returning back to their own spaces, each woman continues struggles with the specificity of their own time period. Lucy, in the dawn of humanity, is concerned with the absence of the men in her life, as she grapples with her own motherhood. Around the 21st century, Mary is listening to the radio as it informs her of a witch hunt out to get her and seems to possess the power to conjure fire whenever she wants to. In an unspecified technological bubble, Jane is going on an intense detox diet, starving herself in order to change her body. 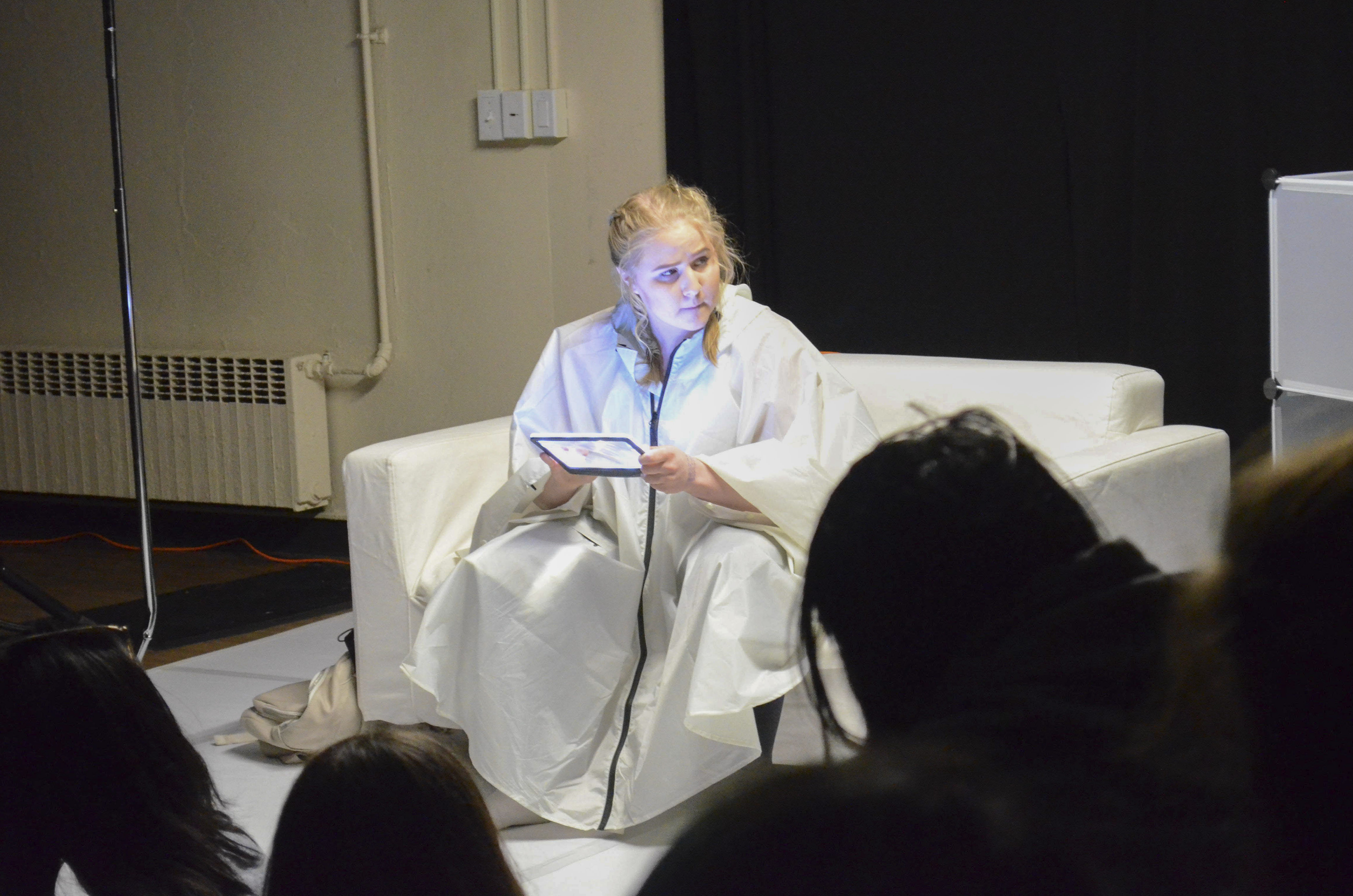 But the ability to categorize these three women as representing the past, present, and future becomes more complicated as the actors start invading each other’s spaces as different characters. Nefferdorf also plays Y, Lucy’s husband, whose masculinist possession of his wife is repeated again and again across time, from the time of cavemen to American slavery to 20th century domestic scenes. The disturbing reoccurring image of a white man always controlling a black woman is presented through a distinctly queer lens, with audiences always consciously aware of the performativity behind Nefferdorf’s embodiment of white masculinity.

Meanwhile, in the 21st century world, Bashir is also portraying Effie, a woman who is miraculously saved from a church bombing by Mary and then repays her savior with a warm meal. The intimate, if not romantic, relationship between Effie and Mary is surprisingly delightful, even if the circumstances bringing them together soon starts to be put under question.

Finally, Ahmeti gets transported into the sanitation-obsessed future, becoming Jane’s friend Spencer, someone who will go to violent means to convince her that there’s nothing wrong with Jane’s body and mind.

Reading about this web of interconnected storylines might sound confusing, but under the precise hand of Izzy Koff ’22 (who co-directed this production along with Bian), multiple meanings can be smoothly interpreted from the same elliptical scenes. Bian audaciously places a large amount of trust in her audience to interpret the scenes for themselves, not building the scenes up to a single educational thesis or unifying plot line, and fluidly moving between the genres of fantasy, magical realism, and melodrama. This style might frustrate some, but for most viewers, watching the show seemed an engaging experience, offering one the slow realization of human bonds that transcend across cultures, races, and time. There are striking similarities between Lucy, Mary, and Jane: All struggle with expression through the English language, codependence with absent men, bodily speculation about toxicity and motherhood, and helplessness to political forces. The similarities of these experiences across centuries is both a source of distinctly female solidarity, and a sign of generational trauma that can’t help but be passed down. 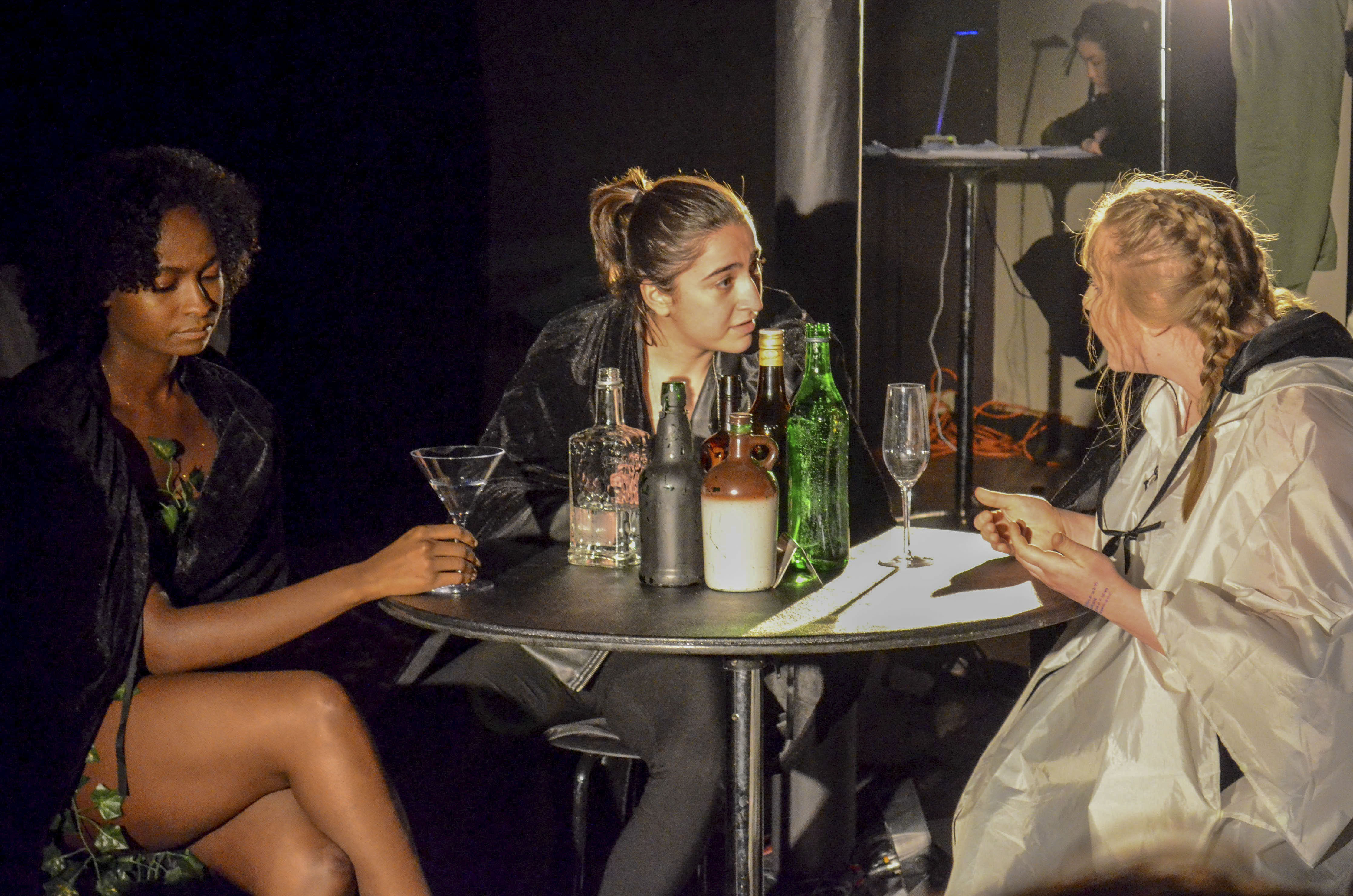 The double-casting of the roles is a smart decision on both Koff and Bian’s part, allowing us to see the connection between worlds embodied by the same actress, while still being aware of the inherent theatricality of such an act. Nefferdorf can transform from a self-destructive teenage Jane into the abusive husband Y within a few seconds, and Bashir seamlessly code-switches form the still English-challenged Mary to the confident, breezy Spencer. Watching these performances, I’m reminded of theorist Eve Sedgewick’s definition of queerness as “an open mesh of possibilities, gaps… lapses and excesses of meaning.” We’re allowed to feel these excesses of meanings in a visceral way: Although these women discover power in their connections to one another, they also embody each other’s antagonists, abusers, and triggers of trauma.

While it would be easy for an all-woman play to be read as a treatise about women’s unity despite a destructive male gaze, Koff doesn’t necessarily see it that way.

“I’m from right outside of D.C., so it’s a pretty liberal hub, and I went to an all-girls school,” Koff said. “And there’s this idea that men are the worst, and if we didn’t have men in the world, everything would be better, et cetera, et cetera. But it seemed to me in this show…that there’s still a lot of pain and suffering without them. Even if it seems like it would solve a lot of problems, the show [reveals] that it wouldn’t make the world so much better.”

“The narrative isn’t and shouldn’t be, ‘Oh there’s a problem, we solve it. There’s pain, and we conquer it and get better.’” Clarity Bian, her co-director, agreed. “It’s not always like that, and not everyone can do that for whatever reasons.”

Bian first developed the play in the context of an advanced playwriting class under Professor Tira Palmquist, who encouraged her to bridge together multiple different storylines. She wrote the time-jumping play non-linearly, inspired by the work of playwright debbie tucker green.

“Basically [green’s] plays show me that stories don’t need to be coherent, language function as they need to not to please the audience,” Bian said. “She showed me that the stories need to be told. And some of these stories are violent and disturbing stories.”

In “Eons,” Lucy, Mary, and Jane’s stories are indeed incredibly violent, as the characters are victims of rape, slavery, and death, all filtered through their oppression by men and their own self-destructive acts. Perhaps where this is where the time-traveling elements come into play.

Though many might be quick to associate “Eons”’s operatic time-traveling with science fiction like “2001: A Space Odyssey,” Bian’s play more closely resembles some of the female-centered mythologies of various African and Asian cultures. Wole Soyinka described the metaphysical space where Yoruban religion is practiced as a “fourth stage…located between and around the three realms of the dead, the living, and the unborn, corresponding to the time sequences of the past, the present, and the future.” 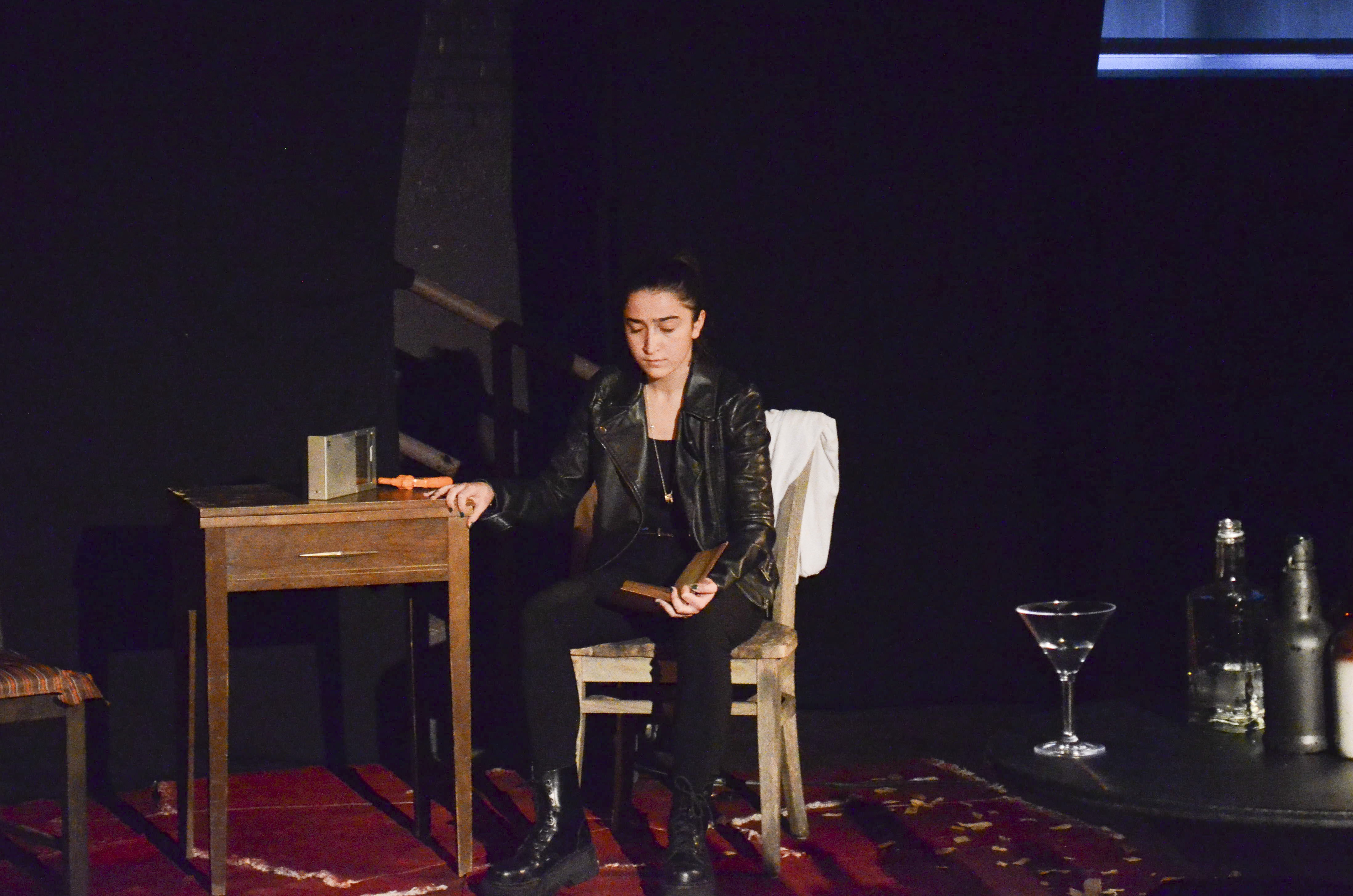 The bar where all three actresses meet to laugh, drink, and share their pain is literally a fourth stage from the three discrete time-spaces that the women each occupy, and its proximity to the audience makes one think that the whole theatrical world that Bian has created is fulfilling a similarly ritualistic space, one that is needed for marginalized communities to be able to share their pain.

The production took special care to create a setting in which the trauma written into the play had space to breathe. Koff and Bian enlisted the help of fight choreographer Ramsay Burgess ’20 and intimacy choreographer Rachele Merliss ’19, and assembled a primarily Asian design team in order to ensure that the story was speaking directly to marginalized experiences, producing the play through both Second Stage and the SHADES Theater Collective.

Lucy, Mary, and Jane may have had to endure unimaginable trauma. However, instead of merely recreating trauma on the stage for audiences to witness, in “Eons,” Bian has created a theatrical world in which we can imagine different eras colliding, where women can find hope within devastation and devastation within hope, and where the end of the world can actually be its beginning. It’s a place in which we can share our pain. Even though that pain may be difficult to share, for the women and marginalized communities that the play speaks to, in Bian’s words, “it’s a story that needs to be told.” As Bian continues her career studying playwriting at Columbia’s MFA program in the fall, it is clear that she will continue to tell such stories that need to be told.