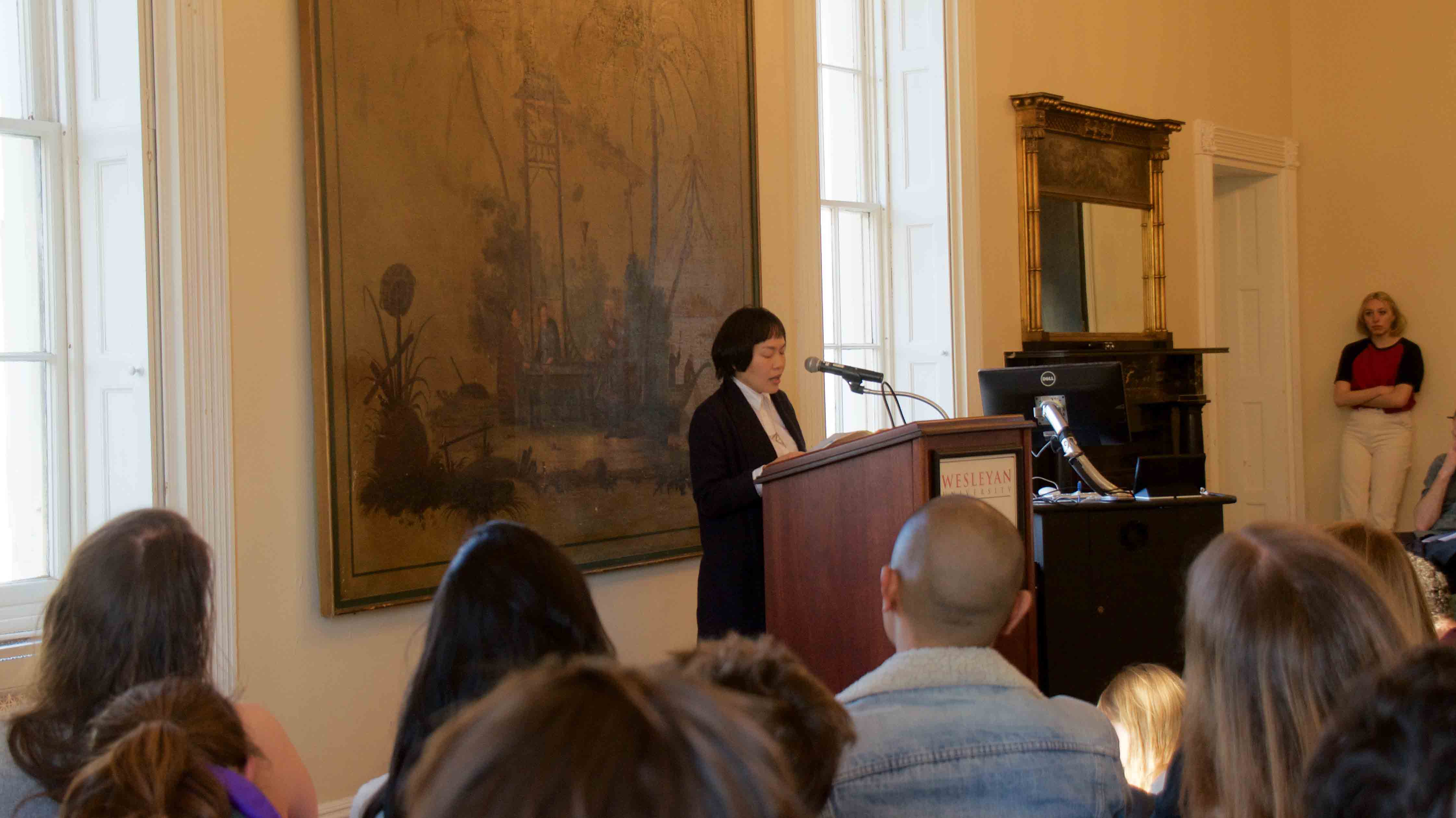 This past Wednesday, April 10, writers and Wesleyan alumni Celina Su ’99 and Jordy Rosenberg ’94 participated in a reading at Russell House.

Su is the Marilyn J. Gittell Chair in Urban Studies and a Professor of Political Science at the City University of New York. Her first book of poetry, “Landia,” was published in 2018. Her published work includes poetry chapbooks as well as several books on civic policy and pieces in a variety of journals.

Rosenberg is an associate professor of 18th-century literature, gender and sexuality studies and critical theory at The University of Massachusetts Amherst. He is the author of the New York Times Editor’s Choice selection “Confessions of the Fox,” described by The Times as “a mind-bending romp through a gender-fluid, 18th century London.”

Su, who was introduced by Associate Professor of the Practice in Creative Writing Danielle Vogel, started off her reading on a humorous note, remembering her time at Wesleyan and noting that she had even lived at Russell House for a semester. She then launched into a poem that she mentioned was based off of the 303 internet error page; a reflection on internet culture, intimacy, and place. Several other poems touched on an individual’s relationship to cities and the poetics of transit, especially exploring the airport space in all its complexities. One of the most interesting pieces that she read was based on oral histories that she conducted of her neighbors while living in Manhattan’s Chinatown. The piece explores notions of memory, as well as of gentrification and changing dynamics within a neighborhood.

“We traced the dust lines/Left behind from the appliances,” Su begins the piece. “Tenement apartments become dance spaces without bars or mirrors,” she then reflects, mapping out the complex positionality of space in a city that is constantly changing and becoming increasingly unequal.

Su wonders what would happen, “if we could have shrines on every block of the homes that the Atlantic Barclays center razed, or those that Moses demolished to make room for the expressway with overpasses too low for public buses to pass under.” This convergence of Su’s poetic abilities and deep knowledge of urban studies, especially related to the history of gentrification in New York, results in poems that are politically astute, if not necessarily groundbreaking. 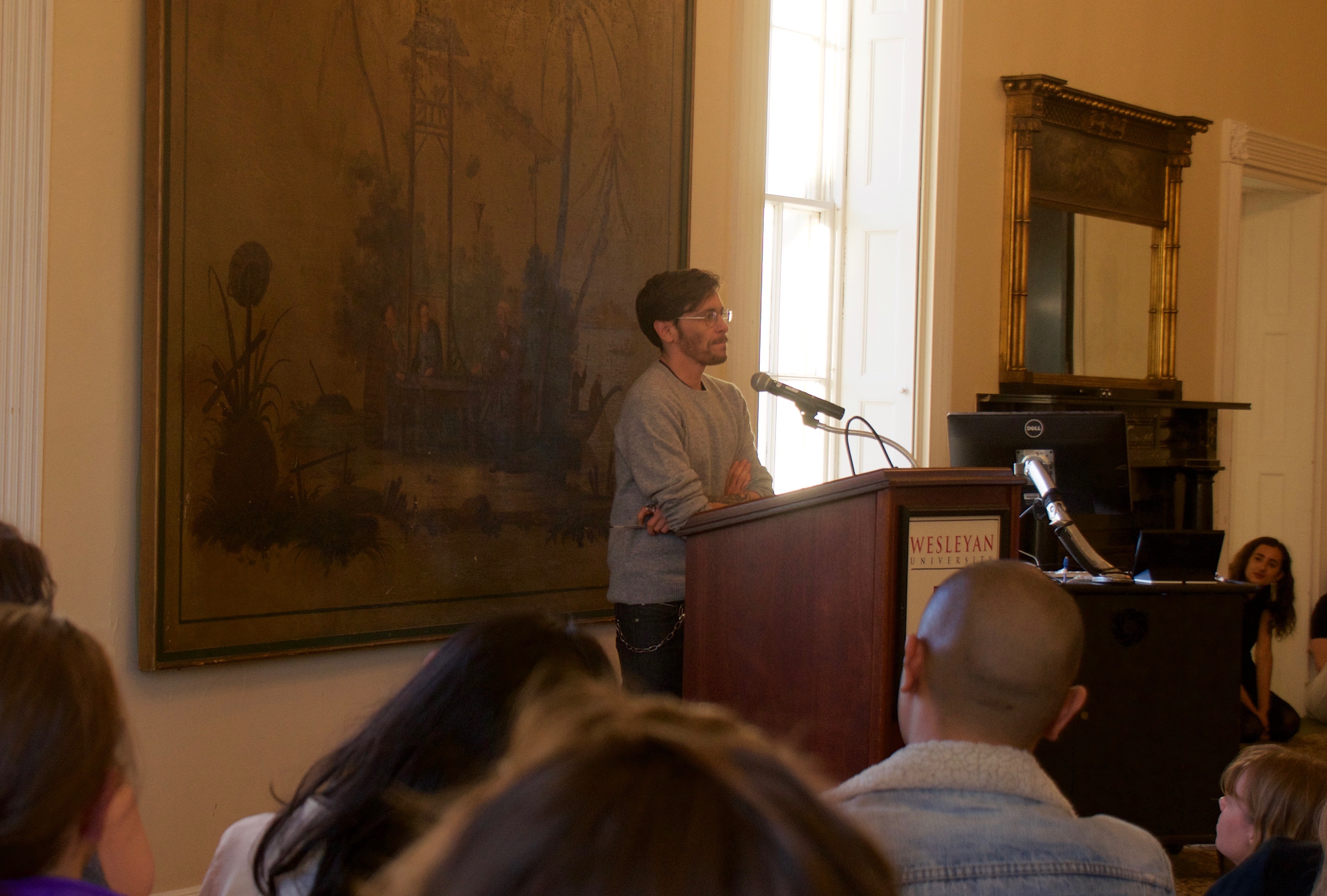 Rosenberg was introduced by Professor Christina Crosby, who advised Rosenberg during his time at Wesleyan and who emphasized the role of Marxist critique in Rosenberg’s writing. Rosenberg read not from “Confessions of the Fox” but from a piece in progress that began with his experience caring for his dying mother, from whom he had been estranged for many years. During this process of care-taking, Rosenberg explained that his mother had been keeping a diary, one that she explained on her deathbed was actually a letter to him—an apology for his being cut out of her life.

Rosenberg was struck by a line in this letter: “I think I need to pray now. I’m not sure who to—maybe to Jordana [Jordy’s name at the time]’s Karl Marx.” This line inspired Rosenberg’s piece, which is essentially this prayer to Marx, in a way that explores his mother’s generation’s notion of gender, as well as segments that are trying to understand why the writer has such a need to write to Marx—delving into ideas about commodities, in relation to film particularly, a la Walter Benjamin. The piece is thus, as Rosenberg explains, somewhat of a fictionalized noir thriller, starring a version of the mother.

Rosenberg read from a section that includes the narrator describing her husband. Throughout, dark humor and intensely smart self-deprecation abound, beginning with the tracing back of “the beginning of the end” to an argument in 1983 regarding the movie “Flash Dance” that turns into a hilarious and poignant recounting of Rosenberg’s teenage experiences as a queer and trans person. Much of the piece is set at the woman’s mother-in-law’s funeral and relies on wonderfully specific and relatable character studies. One extended bit revolves around Fawn Duchatsky, who feels that, having grown up in the same town as Barbra Streisand and having gone to the local selective performing arts school while Streisand attended public school, “it would be not presumptuous in the slightest to think that it should have been Fawn Duchatsky, not Barbra Streisand” who found fame.

The piece was hilarious, especially within the specific logic of morbid, queer, and Jewish humor—painting a picture of the dysfunctional Jewish family that is incredibly on-the-nose. Much of this humor was thanks to the performance chops of Rosenberg himself, who mentioned that his mother told him that studying English at Wesleyan would mean that “he could only ever afford one-ply toilet paper” but that he had since come to believe that this was an alright situation to be in, that one-ply was better anyways. The room, full of future one-plyers, was with him the whole time.