Track Races to Mixed Results in Start of Spring Season 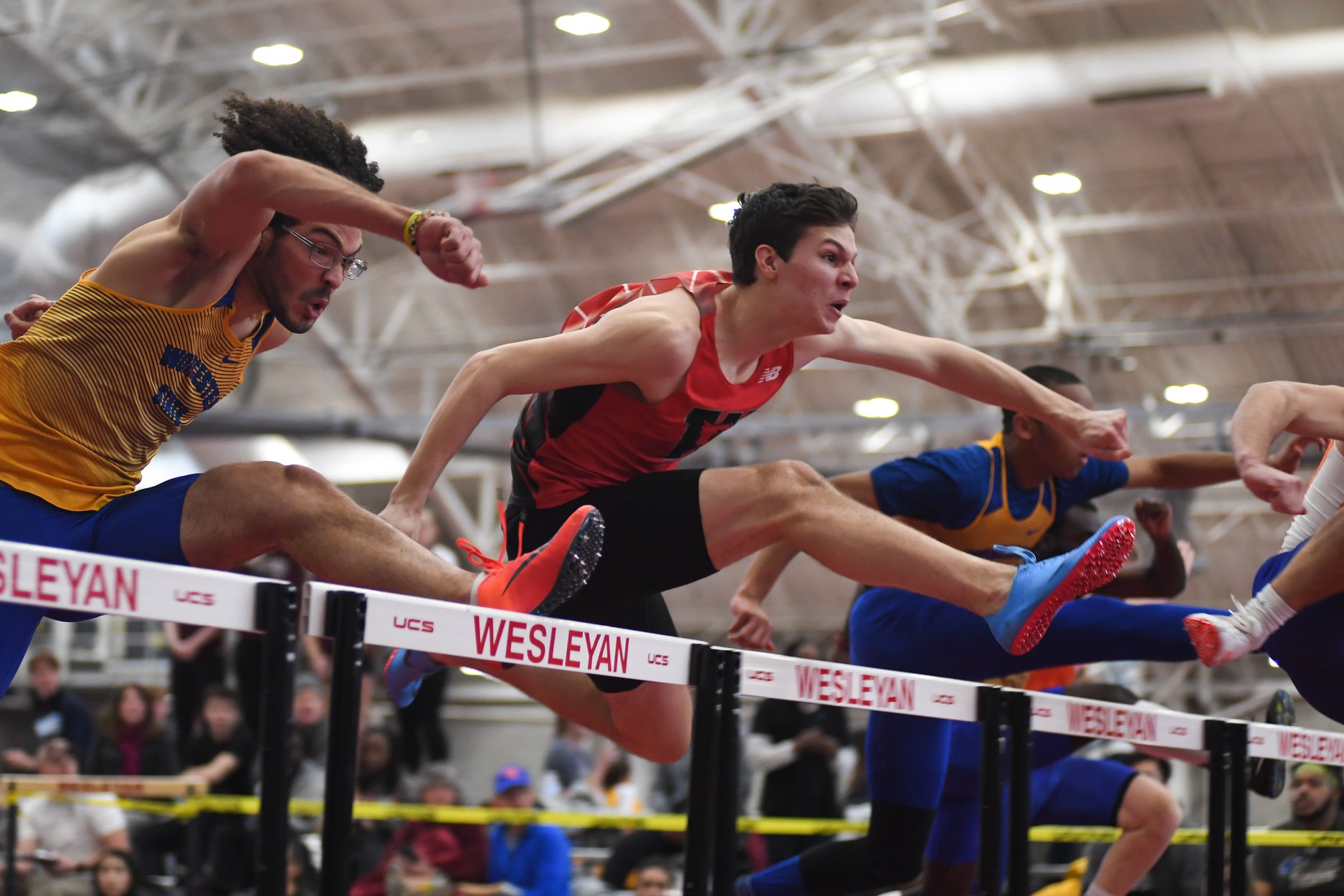 Wesleyan’s track and field teams have been in indoor competition throughout the winter, but now that the weather is warmer, the teams have transitioned to their outdoor season with serious NESCAC and even Division I competition.

The outdoor season officially began on Saturday, March 23 with the annual Wesleyan Spring Classic. Division III teams from across the East Coast came to Middletown for some sunny spring action.

The men’s team recorded seven first-place finishes, with first-years Christian Denny and Griffin Maristany dominating in the 200-meter race and 400-meter race, respectively. Other first-place victories came from Kyron Roberts ’21 in the 800-meter race and Andrew McCracken ’19 in the pole vault. The Red and Black excelled in hurdles, with first-year Nick Carulli and sophomore Kevin DeLoughry claiming the win in the 100-meter and 400-meter hurdles. In the 5,000-meter race, the Cardinals shut out other teams to take the top four places: Kevin McMorrow ’20 crossed the finish line first, followed by fellow juniors Adam Linsky and Grant van Inwegen, and first-year Dale Ross.

The women’s team also saw three first-place finishes, as well as nine top-three performances. Junior Rosie Skovron and senior Katie Maehl finished first on the track in the 10,000-meter and the 100-m hurdles, respectively, while Ivie Uzamere ’21 dominated in the hammer throw. The team matched its first-place finishes with a trio of second-place victories: Julia Cella ’21 in the 400m, Addie Thomas ’22 in the 800m, and Cella, Allegra Fils-Aime ’19, Becky Velie ’22, and Rachel Morrow ’22 in the 4x400m relay. To round out the day, Fils-Aime found success once again in the 400m, this time with a solo run to take third place. Fils-Aime landed in the same place for the long jump as well, with a 5.21m mark. First-year Caelan Campbell followed up with a third-place finish in the 200m.

Now well into her first season at Wesleyan, Campbell commented on the transition from indoor to outdoor competition, noting the changes between not only the meet environment, but also the physical race course. 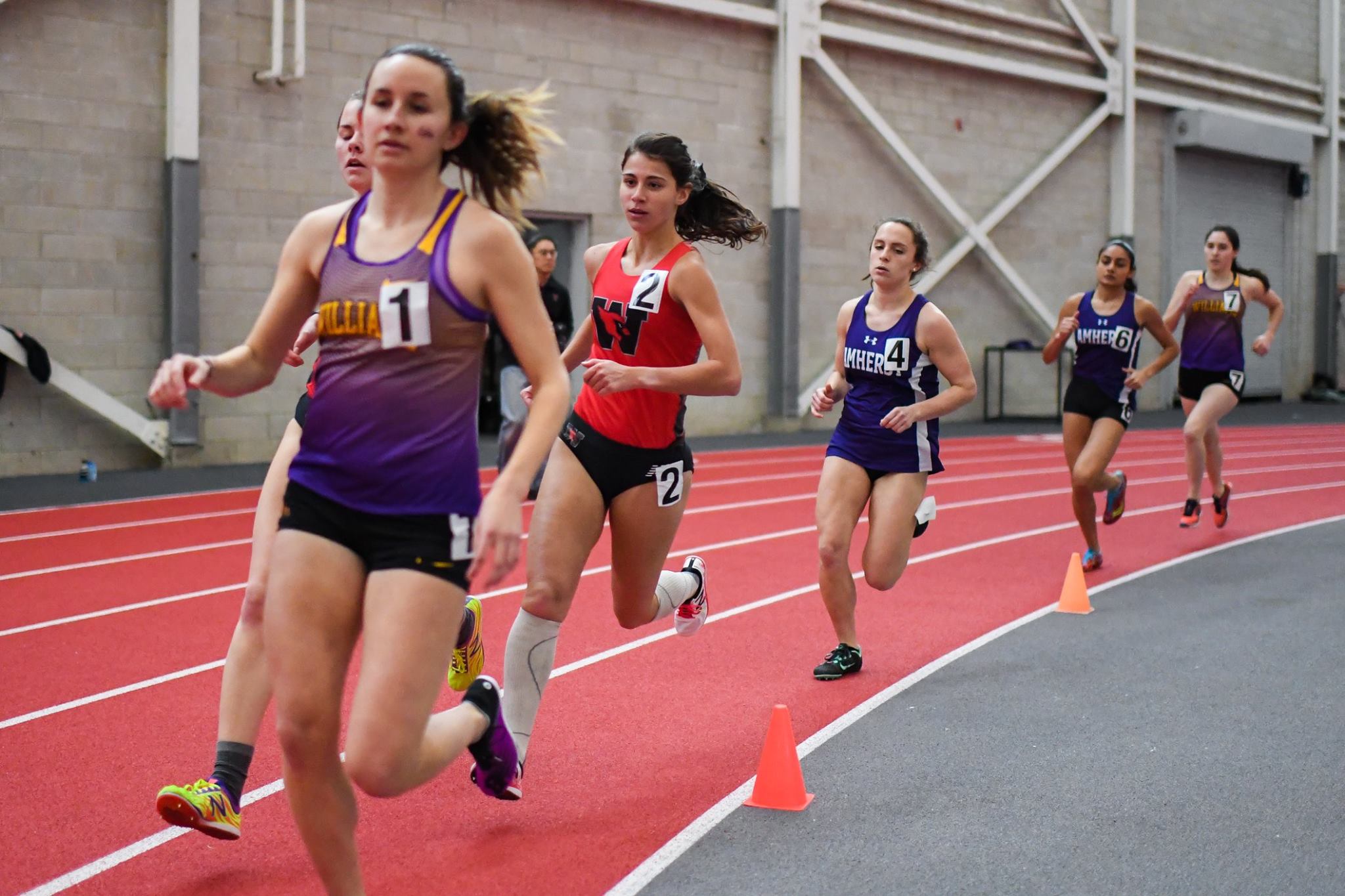 “My favorite part about indoor is that all the events happen in one small-ish area, so during meets, everyone is cheering on everyone else,” she said. “In outdoor track, the events are much more spread out, so it’s a bit harder to do. I prefer running outdoor to running indoor, though. My main event is the 200m, which is one lap on an indoor track and a half a lap on an outdoor track. The distance is the same, but it just feels much easier to run a half a lap, so psychologically, running outdoors is a lot easier.”

Despite the spring season getting underway, the teams competed in a winter-themed meet, the Tufts Snowflake Classic, a week later on March 30. The men’s team took sixth of 19 teams, while the women’s team took the bottom half of its competition, finishing 11th of 20 teams. Although neither team won the gold, there were notable individual top performances and personal bests.

McMorrow continued to stride in the distance events, finishing first in the 1500-meter race with a personal record of 3:58:58. DeLoughry took top honors as well, this time in the 400m hurdles. DeLoughry also thrived in non-hurdling competition, placing third in the 400m with Maristany following in fourth. Both DeLoughry and Maristany recorded personal bests in their efforts. On the field, senior Olaniyi Adebayo also beat his best with a hammer throw of 36.62m.

The hammer throw proved to be a point of strength for both teams, as Uzamere took first of 34 athletes with a personal best of 47.59m. Jenny Aguiar ’19 took the other first-place finish for the women’s team, finishing in 57.48 in the 400m. Tara Peng ’20 and Maehl both found success on the field, with a third-place finish from Peng in the pole vault and four top-ten finishes from Maehl. Maehl competed in the high jump (sixth), long jump (seventh), javelin (seventh), and shot put (seventh).

Back into spring competition and away from the Jumbos’ wintery meet, both teams found themselves in the lower half of competitors in the Amherst Spring Classic. The women’s team took fourth of seven teams, with three first- and third-place finishes and four personal records. Aguiar dominated in both the 200m and 100m races, finishing first and third. Senior Claudia Schatz also took third on the field in the 800m, while Uzamere and Maehl placed first in the hammer throw and high jump, respectively. Maehl once again excelled with personal bests, transcending the divide between track and field to excel in the 200m and 100m hurdles and the javelin. First-years Sophie Scobell and Nora Markey both scored personal bests in the 1500m, while Campbell finished with a personal record in the 100m. 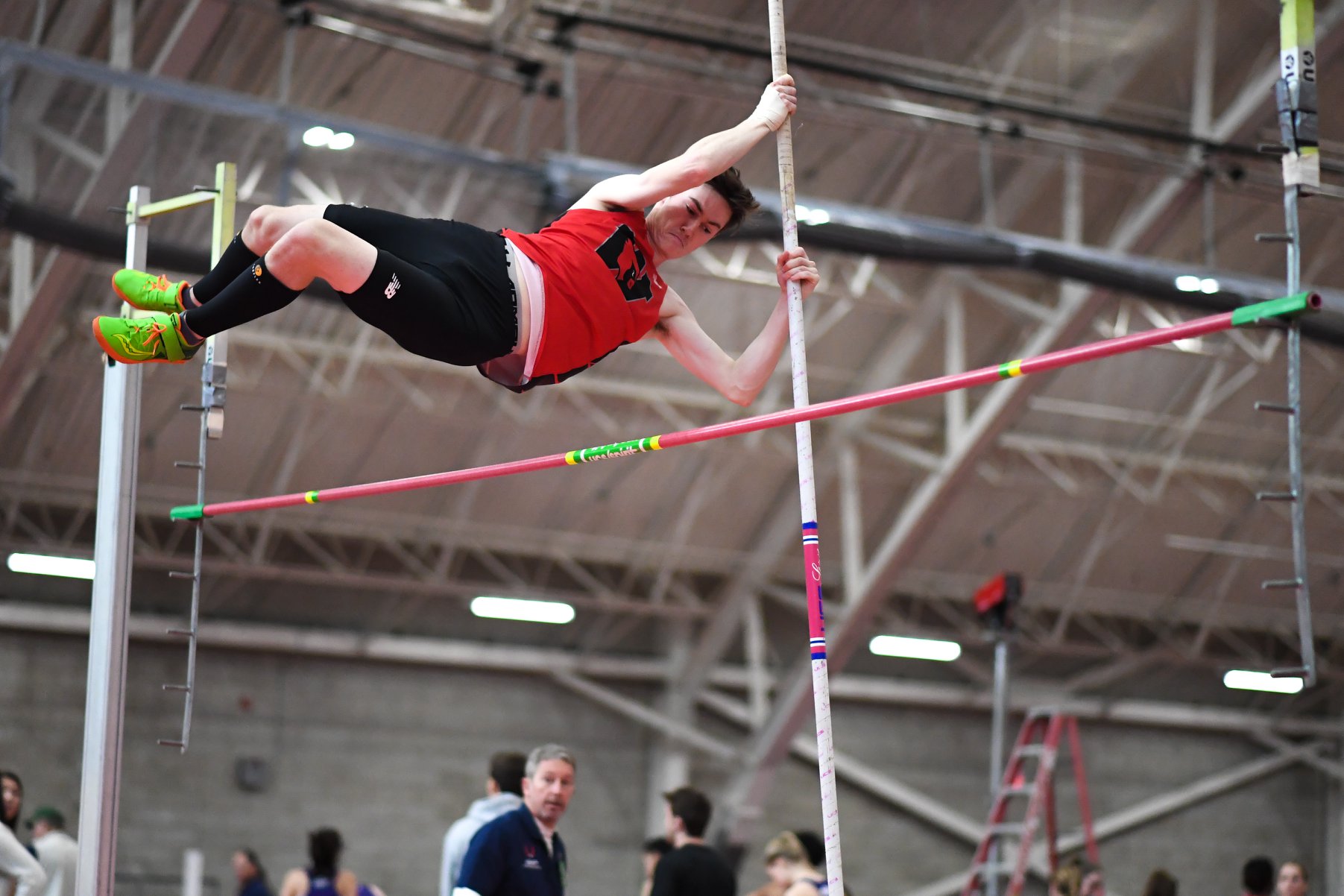 “For me, a really rewarding part [of being on the team] is setting new personal bests for my events,” Campbell said. “But I think the most rewarding part of participating in sports or any other activity in college is finding a community on campus that you are really close with, and for me, that community is the track team.”

The men’s team also recorded numerous personal bests in the Amherst competition, placing fifth of six teams. After DeLoughry and Roberts took first and second in the 400m, they notched personal records in the 200m, finishing in fourth and seventh. Maristany also finished with a personal best in the 200m, while Denny took his own in the 400m. In a legendary 1500m race, junior Bill Bajohr led the way with an incredible fifth-place finish nearly ten seconds ahead of his former best mark. A slew of sophomores and first-years followed him, all finishing with their own personal records: Benjamin Cahill ’21, Tommy Doyle ’21, Matt Frishkoff ’21, Miles Aronow ’22, Alexander Blaylock ’22, Ross, Will Ratner ’22, and Ethan Walker ’22.

While most members of the team competed in Massachusetts, a few select athletes traveled to Princeton, N.J., to race in the competitive Samuel Howell Invitational against numerous Division I athletes. For the men’s team, van Inwegen finished thirteenth in the 1500m in just over four minutes. Seniors Julia Mitchell and Rhoen Fiutak also competed in the 1500m, taking eighth and twenty-eighth, respectively. Sophomore Becky Lopez-Anido rounded out the day, finishing twelfth in the 800m.

Both teams are back in action this weekend in their home state, when they compete in the Conn. College Invite on April 12 and 13.