“Life on the God Beat”: Liz Kineke Reflects on Religion and Reporting 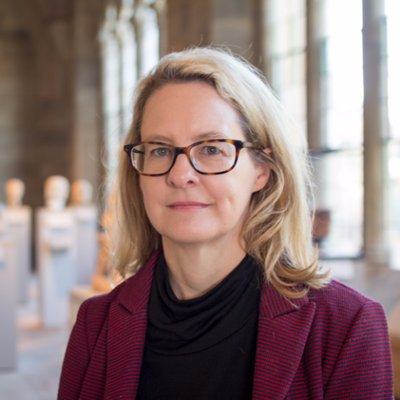 Liz Kineke, a producer at the CBS Religion & Culture series, visited campus to deliver a lecture titled “Life on the God Beat” to discuss the importance of reporting on religion in contemporary America, emphasizing the prevalence of faith’s impact and the general religious illiteracy of the U.S. public. The talk, held on Thursday, March 28, was sponsored by the Religion Department, the Writing Certificate, and the Office of Faculty Career Development.

Since joining the CBS team in 2005, Kineke has created dozens of half-hour documentaries covering a range of religious and public-life issues, as well as matters of cultural heritage and activism. Her most recent project airing through CBS, “Teaching Kindness: Religion & Identity in Young America,” explores the effects of religion-based bullying on Sikh, Muslim, and Jewish students.

Kineke noted that her route to covering religion involved reporting on a variety of cultural and political topics.

“For the last 14 years, I have looked at everything from climate change to criminal justice reform all through the lens of religion,” Kineke said. “The learning curve has been really steep, and it has taken me about ten years to feel like I really got it on the God beat.”

Through her time spent interviewing the American public and people of various faiths for her documentaries, Kineke recalled observing a concerning lack of religious literacy or understanding of its salient presence in everyday life, nor the implications of this increasingly undeniable reality.

“Religion touches every aspect of society and is deeply embedded in our culture,” Kineke said. “And yet, our country today suffers from a serious lack of religious literacy. One of the most important things I have learned on the God beat is that religion is always in the room and we ignore it at our own peril. Today we are witnessing a surge a hate crimes across communities nationwide, among those most affected are members of the Jewish, Muslim, and Sikh communities.”

Covering disparate topics from a religion reporter’s perspective, Kineke has observed the many ways in which faith pervades American life. Kineke noted that a dominant narrative about religion is that it is relegated to the private sphere of religious sanctuaries or the home. However, she was quick to counter this narrative by asserting that religion’s sphere of influence is not bound by these theoretical lines dividing the private and public sphere. Religion, rather, engages in a powerful intersection with government, culture, and society.

“Throughout my years working with CBS and speaking with various communities, I have encountered many preconceptions the general public have seemed to form collectively toward religion,” Kineke said. “While the media often places emphasis on religiously motivated activism at conservative political events or white supremacist rallies, little attention is often given to discussing the activism of communities of faith trying to combat these displays of prejudice.”

Kineke shared excerpts from her past and current projects that explore how many religious communities engage with matters of public concern through social movements. Kineke brought up an excerpt from one of her documentaries, “Faith on the Front Lines,” in which she examined the efforts of interfaith alliances and clergy members who gathered to stage counter protests during the 2017 “Unite the Right” white supremacist rally in Charlottesville.

Kineke noted that a challenge for many of these clergy members she interviewed was reconciling their religious beliefs with the historical usage of biblical scripture to justify slavery and its modern usage in white supremacist language. Decolonizing one’s faith, she explained, is particularly salient in the modern discourse.

Kineke further emphasized that religion is a topic that extends far beyond religious communities, with an often under-appreciated impact.

“Four years ago, I might have said religion’s presence is that of a white noise hum, but today I believe it is a blaring siren,” Kineke said. “In these critical times, we have to ask ourselves: Are we listening? As I continue to consider possible ideas for future projects, I always strive to keep in mind how I can enrich the current discussion being had about religion or provide a needed nuance through engaging with communities whose voices are not being adequately represented.”

In her closing words, Kineke explained how she views her role as a journalist and her hope to change how people conceptualize and speak of these complex issues.

“Religious literacy might not end this surge of violence and hate but it may better reinforce our commitment to protecting these minority communities,” Kineke said. “As a journalist, I see this work as a way to sustain the first amendment by making a commitment to seeking the truth—bringing the issues related to religion and religious freedom to light is at the heart of this commitment.”