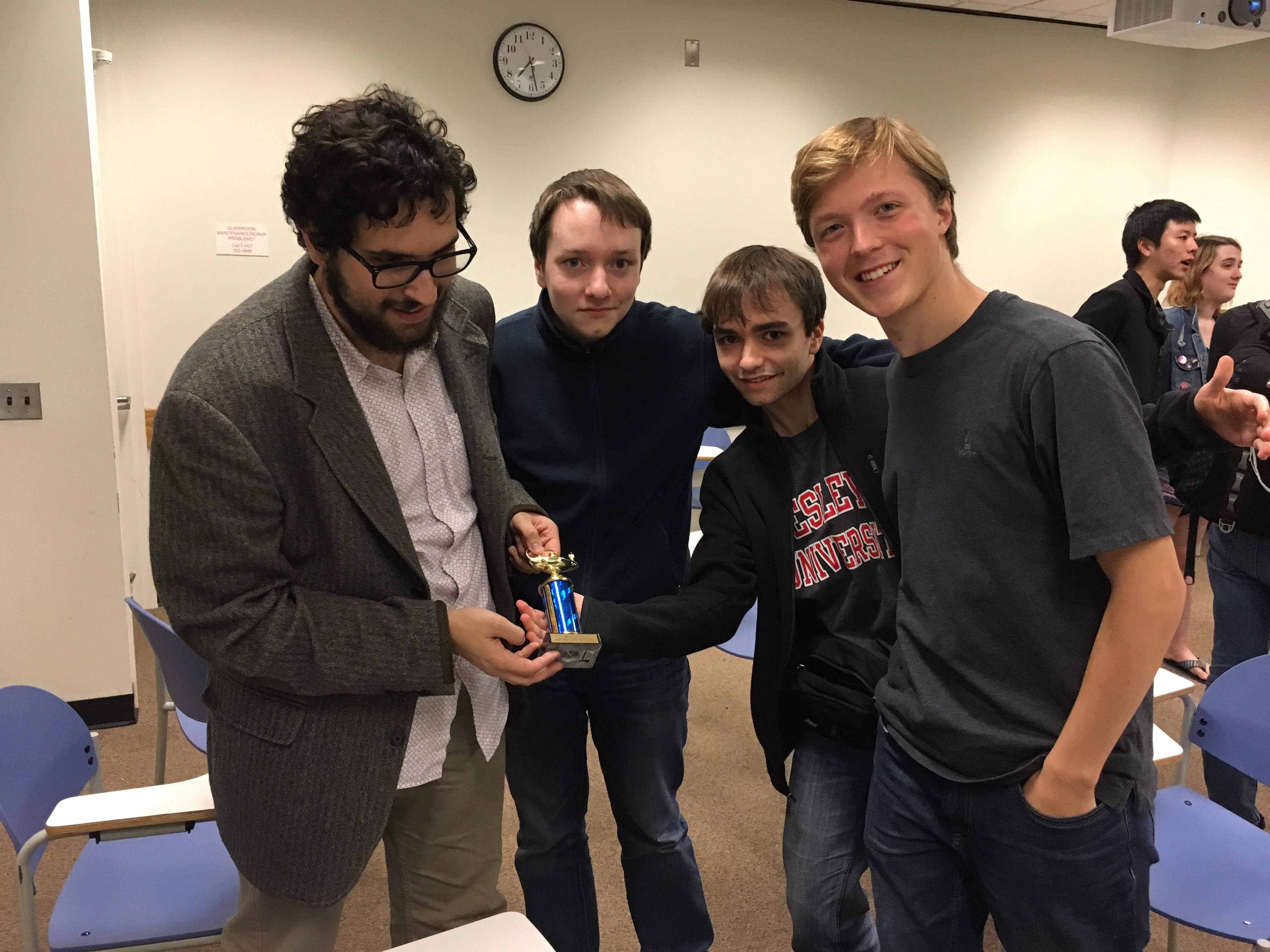 “The thing with quiz bowl is that it’s really hard,” says Zachary Bennett ’19, current captain of Wesleyan’s Quiz Bowl team. “A lot of people get scared off by…the level of knowledge you have to have in some subjects. You really have to be kind of a hard-o at your specific subject to punch at the college level.”

If you haven’t heard yet about this national competition-bound team of four, you’re not alone. In fact, one of its members, Sam Bidwell ’21, only learned of the team’s existence partway through this year after being clued in by a friend.

“I figured, let’s see what it’s all about,” Bidwell wrote in an email to The Argus. “And since then, I’ve rather enjoyed my time on the team, even if it does mean I’ve had to get up a hair too early for my own liking sometimes.”

This is college Quiz Bowl: getting up early, being a hard-o, competing in tournaments against NESCAC and Ivy-League schools to see who knows more about obscure facts and trivia. The current team, after a period of disorganization and lack of interest, has come together this year in order to qualify for the national competition in Chicago on April 6. Bennett, who has been involved with quiz bowl since high school, took us through the history of the team.

“We started off my freshman year a little more established,” he explained. “And then it all fell apart. And now, this year, it’s coming back. It’s kind of a nice three-act story. Straight out of some movie.”

Quiz Bowl, after not running last year due to lack of interest, returned thanks to an influx of new players—Max Shatan ’22, Connor Matteson ’22, and Bidwell—who revitalized the team. Their presence has helped carry the quartet to good placement in three tournaments this year, qualifying them to compete nationally.

“This year, Max and Connor and Sam joined,” Bennett said. “So I’m kind of the old veteran, and we got some new whiz kids on the block. They’ve all been great to compete with. They’ve really elevated the level of this team to new heights.”

One of these whiz kids, Matteson, is well aware of the arc that Bennett describes.

“There was a dark age,” he began. “There was definitely a vacuum that wanted to be filled, and Max and I were passionate about it, so we stepped up.”

Matteson and Shatan have taken on unofficial leadership roles in order to propel the team to their recent successes. Shatan, in particular, has taken it upon himself to try to perpetuate the Quiz Bowl’s existence.

“We’re going to try to establish ourselves as more of a visible presence on campus,” he said. “To try to contribute more to the community. Part of that is having more events, so, for example, during WesFest we’ll be having a Jeopardy! simulation for prefrosh. It’ll be fun, they’ll be introduced to the club.”

“Hopefully next semester or year we will have more students join us and have the luxury of a proper choice among the candidates for a better team,” he wrote. “And three of us are sophomores or freshmen, so there’s plenty of time for the club to grow!”

“What’s great about Connor and myself being freshmen is that we will get to work together over the four years, and really build up the team to where we want it to be,” Shatan echoed. “And then to get new people to pick it up after we leave.”

Part of the trouble with growth is the insularity of Quiz Bowl and difficulty of competition, something Shatan touched on briefly.

“You have to have commitment, and at least some base knowledge coming in, in order to punch with the big boys,” he said.

In saying this, Shatan seems to be highlighting an issue with Quiz Bowl as a whole: It’s about competing with the boys. The fact that Wesleyan’s team is four men is not an exception for these kinds of clubs. The expectation, then, is that you’ll be competing with and against other men. It’s a fact that Bidwell admits he hasn’t thought much about.

“Being realistic, I personally do not tend to give such things much thought one way or the other,” he wrote. “It’s unfortunate such an unequal gender division has happened, and that there’s little real interest in the club right now, but given that we had about 4 people to choose the team from this year, it’s not like we really had much choice.”

Shatan, though, seems to have reflected on this problem.

“The gender divide in quiz bowl is definitely something that is a really big topic,” he explained. “A lot of it has to do with quiz bowl clubs being traditionally male-dominated spaces. That, plus there’s a lot of casual sexism embedded in the culture…. I think a third thing is that the canon in itself is swayed toward men in history, male authors, stuff like that. There’s been a lot of moves to make that more diverse. But definitely, a lack of diversity in the questions themselves is a problem.”

He went on to explain how a problem like this starts to get fixed.

“I think there are institutional changes within quiz bowl itself,” Shatan said. “There are committees that push for non-male identifying players, a lot of which have kicked off as efforts at reform, not discussion. But it definitely starts with individual clubs themselves, not trying to be insular or exclusionary…. That’s something we’re aiming for, is to be more diverse gender-wise. Being four white guys is not the move going forward.”

Shatan and Matteson explained that increased recruitment efforts might help the team make a move toward diversity, mentioning their WesFest plan as well as a high school competition they hope to host in May. Bidwell expressed the hope that the success of the team would draw in new players.

“I think the most valuable thing that the team could do to fix the problem of recruiting would be to succeed as best it can at Nationals so that we can recruit people based off the team’s merits, not just off a cool-sounding competition that might put people off,” he wrote.

For now, the team is preparing for its national competition with cautious optimism.

“I think if we go there, and we keep putting in the general performance trajectory that we’ve had so far this year, we should do pretty well for ourselves,” Matteson said. “I mean, we’re not going to take the crown, but we will definitely not let Wesleyan down.”

“I know that some of the other members on the team have put in a significant amount of effort into making sure they were ready for the competition, but honestly, I see it as ‘We’ll do as well as we do, so let’s see how well that is,’” wrote Bidwell.

“This has been a pretty good season so far,” he said. “It’s had its ups and downs, and I’m trying to manage my personal expectations…. But I think that next year will be a really good year for us.”

“There are lots of good things coming,” Matteson said. “So just keep an eye on us.”

What those good things will be—national success, gender parity—remains to be seen. As Matteson advises, it might be best to keep on eye on what’s coming down the pike.