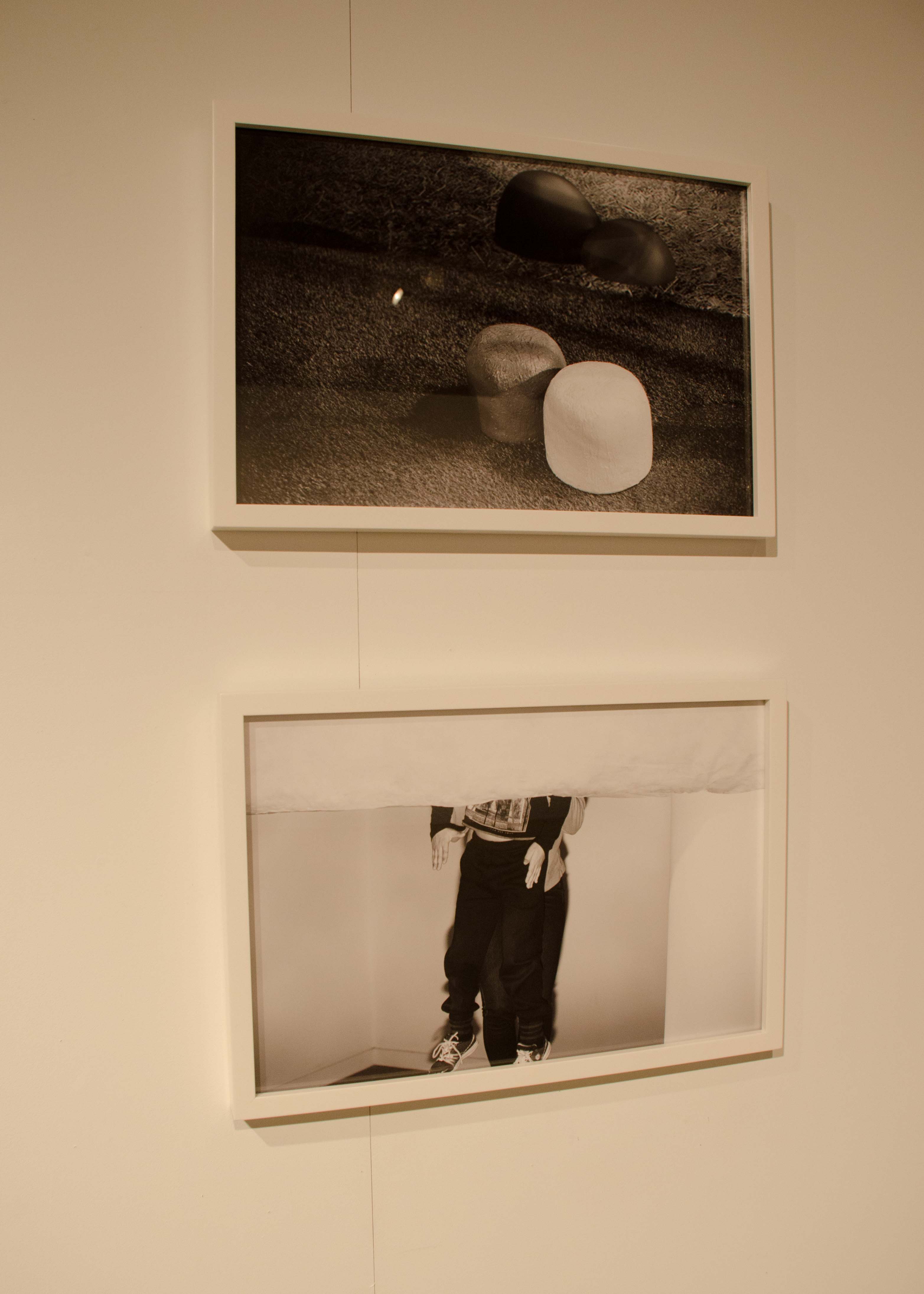 This week was the first in a series of art theses that will be presented at Zilkha Gallery this spring. Shelli Weiler ’19, Katie Hohl ’19, cleo ’19, Kostas Koufis ’19 and Christianne Padilla ’19 presented work from a variety of disciplines and with conceptual origins ranging from performativity to quantum mechanics.

Weiler’s piece, “ENJOY house,” which is in the South Gallery of Zilkha, is a collection of black and white photographs. The photographs explore moments that seem to occupy a surreal, liminal space between the staged and the candid; the everyday and the otherworldly.

“The images present forms of escapist amusement as hostile, uninhabitable environments.” Weiler said in an artist’s statement. “Costumed spaces take on the appearance of dystopian purgatories rather than fabricated wonderlands. Through photographing moments of authenticity at the height of artifice, I look at the ways people manufacture themselves to conform to the props that surround them. Through imposing an order unto the seductive trappings of theatricality rather than the performative theater itself, an uncanny atmosphere emerges from the simulacra of experience.”

Hohl’s piece, “Quantumoid,” consists of three magenta arcs made from translucent magenta fabric. The arcs hang at different lengths and in forms that are at times graceful, at times awkward, and infused with tension that seems to suggest a subsequent leap from the ceiling, out into the gallery space. As ephemeral as the piece appears, it is in fact rooted in hard science, specifically on a molecular level.

“I’ve chosen to portray the journey of an electron of a hydrogen-like atom as it transitions between different energy levels,” Hohl told The Argus. “It’s become a kind of translation of different scientific theories and related representations of quantum mechanics into a set of formal and material conditions that reflect both what I understand and imagine the subatomic world to be like.” 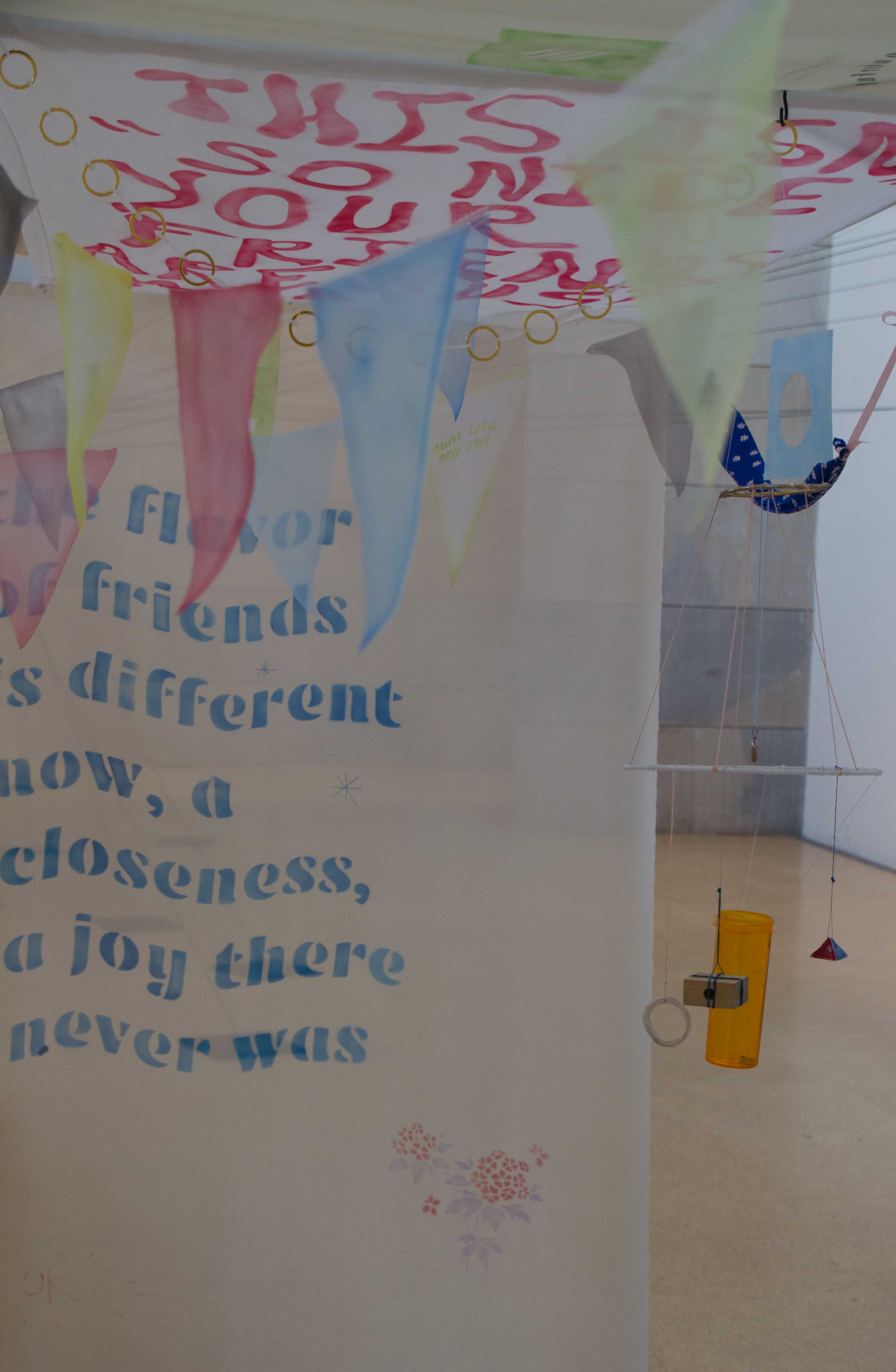 cleo’s piece, “i don’t know what i want, but i know it’s not this” is a room within a room. cleo constructed a shelter of white beams hung with chiffon fabric that was airbrushed with language taken from their sketchbooks and journals. Inside, banners of pennants and bras colorfully drape from the ceiling, while a living room couch emblazoned with patchwork sits behind a table, with a hand-constructed rug underneath.

“I was interested in engaging with personal gender stuff (thinking as a trans femme person about the ways I was socialized as a boy as well as my contentious relationship with my body) as well as the way men/boys have a violent presence in the lives of myself and loved ones,” cleo said. “Additionally I was interested in creating a comfortable and inviting environment, reminiscent of a domestic space, a reprieve from the oppressive/over bearing, and [the] environment of the gallery.”

While the room is bright and cozy, inviting viewers to walk in and experience it as they would any living room, the text makes clear that, like a body can be, it is a site of both joy and violence. Text on one of the walls reads, “when you never see anyone/who looks like you feel/who acts like you wanna look/who carries themselves the way you fantasise you/could one day carry yourself/who oozes the energy you feel you could/one day ooze/how are you supposed to know what you can be?”

Kostas Koufis’ piece, “A Moment in Space,” is also a sculptural installation. The work consists of dozens of black cables that run through the gallery space, stretching from the ceiling to the floor or wall, and intersecting to divide the gallery space into fragmented sections. The stark linear nature of the piece echoes the concrete brutalism of the CFA, while querying its singular, cubic, nature by creating such a complex web of spatial relations. Viewers are invited to walk through the space, thus implicating themselves in the creation of manifold “moments,” as their bodies interact with the contours of constructed “rooms.” 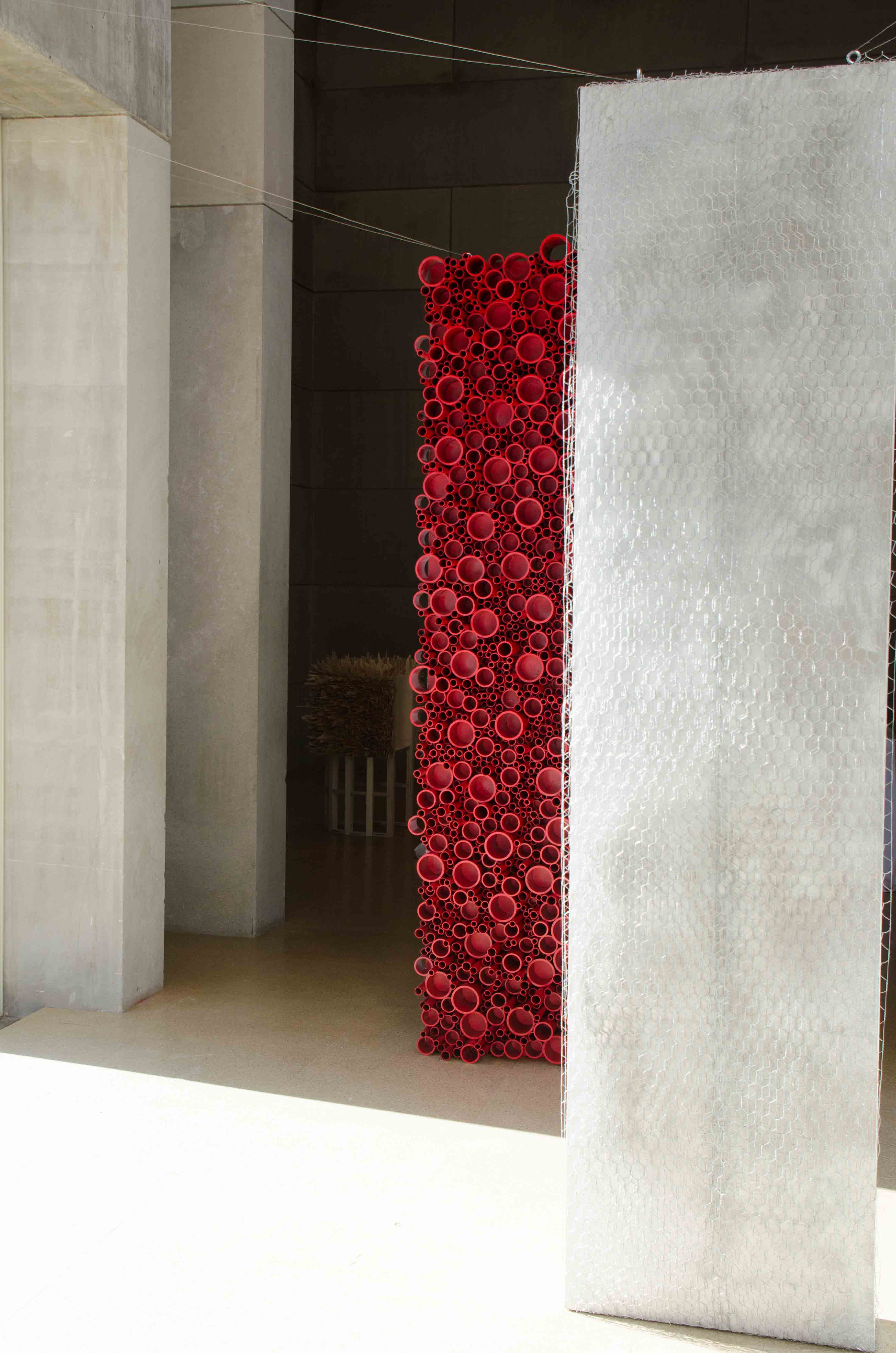 Padilla’s piece, “confirm confront comfort” unfolds slowly, with the placement of the various elements intentionally pacing the viewer’s experience of it. Upon entering the wing, one passes three columns, arranged with rhythmic precision and covered in, respectively, beige carpeting, chicken wire, and a collection of red circles of varied shapes, overlapping with bacteria-like abandon. One then enters a room in which they are greeted by a rather brutal scene—two nest-like chairs that are covered in porcupine-like shards of wood, facing a table that is covered in broken glass. The piece seems to explore how various physical forms, especially textures, affect our emotional states. Although columns are traditionally associated with formality and with memorials or public spaces, the differing materiality of each object challenges this assumption. Likewise, the table and chairs create a discomfiting contrast between the expectation of domesticity and the violence of the materials used.

“I created an immersive experience, through exploration of familiar forms and materials, that could simulate the sensations I feel dealing with my depression and anxiety; in other words, create a physical space where someone could enter and feel what I feel without me verbalizing any of my experiences.” Padilla said.“The setting is representative of how difficult, uncomfortable, and awkward it is to have a discussion around mental health, but I hoped that through my gallery, I could create a spark to a larger conversation.”