Espwesso Baristas Talk Past, Present, and Future of Student-Run Café 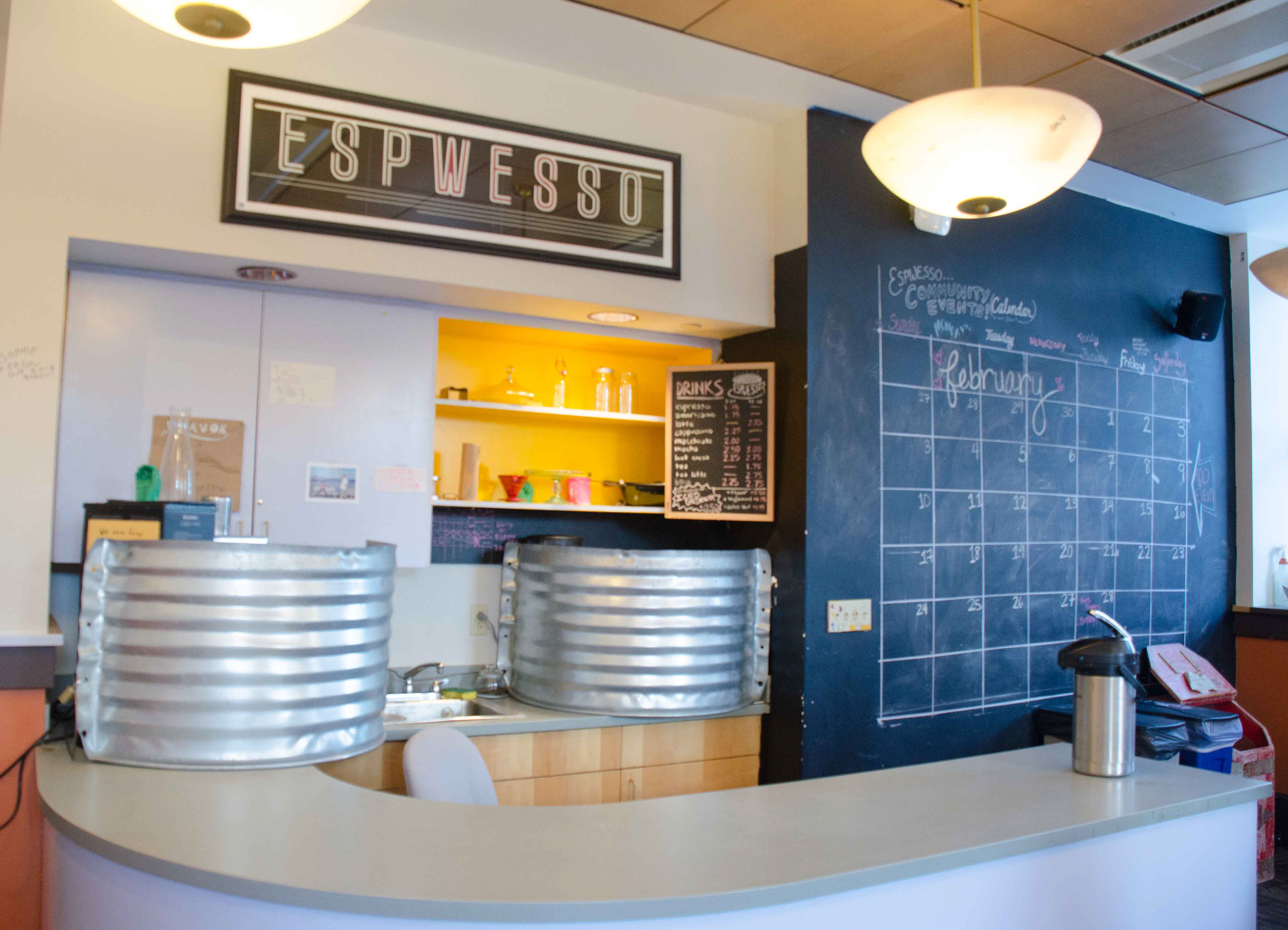 Many Wesleyan students turn to Pi Café for their daily dose of caffeine. It’s well-located, has a good amount of work space, and maybe most importantly, serves fresh bagels.

But there’s actually another place to get good coffee on campus. Located on the bottom floor of Allbritton, Espwesso is a student-run coffee shop that has been serving the Wesleyan community since 2010.

Student-run is exactly what it sounds like: the students do everything.

“Fortunately, because we’re on a campus, we don’t pay rent or utilities, which is how we’re able to keep prices low and provide free drip coffee (if you bring your own mug!)” explained Noa Azulai ’19, current manager of Espwesso, in an email to The Argus. “But from sourcing milk and coffee, to hiring new workers, to (re)decorating the space, to organizing events, to addressing internal issues—it’s all us, all students. It allows us a flexibility that we wouldn’t have if we were overseen by the university. It gives us, as student workers, autonomy over our schedules, which doesn’t happen often in college.”

A student-run business like this one didn’t appear out of nowhere, founders Alex Bernson ’11 and Sophia Levan ’12 explained.

Bernson transferred to Wesleyan for the 2009-2010 school year after spending two years at Boston University and a year on the West Coast working as a barista.

“I had been a big coffee dork for a while at this point,” Bernson said. “I was dedicating a lot of my life to it so I spent a little over a year in Portland, honing my craft there, and then came to Wesleyan. So I was coming in looking to do coffee stuff with my life, basically.”

That year, Wesleyan Student Assembly (WSA) Senator Micah Feiring ’11 spearheaded a campaign to open a student-run coffee shop in the basement of Allbritton.

“He had this dream for a long time of a more student owned and run community space-slash-café-slash-hangout kind of thing and had been trying to get it up in a few different permutations,” Bernson recounted. “He was working on that with student government.”

Feiring penned an Argus article asking if any students wanted to help him open the café.

“[The article] asked if anyone had any experience working in and running coffee shops,” explained Levan, who had the relevant experience after working at her family’s coffee roasting company and in various other coffee shops. “As far as I know, only two people actually responded to the article: Alex Bernson and me. Together the three of us secured the space, a start-up grant for the equipment, and hired the first Espwesso employees.”

“Micah did all the politics of it, Sophie was doing the business side of it…, and I was looking after the coffee side, and training staff, and all the rest,” Bernson said.

But Espwesso’s purpose wasn’t only to serve coffee: The creators also wanted the café to be a tool for teaching students how to run a business.

“From the beginning, we focused on being financially independent and socially and environmentally conscious.” Levan said. “We met with members of the staff, local farmers, physical plant, and economics professors to think through the logistics of becoming a sustainable small business. The goal was not only to build a space for students, but also to create a work environment that students learned from and strived to participate in.”

The process of choosing the name was also student-oriented, with the name decision coming from a poll on Wesleying, the student-run blog.

“The goal was to have a café space that was open during late hours for students to study alongside one another,” Azulai said.

Over time, however, the hours have changed. The café currently serves organic, free-trade coffee from New Harvest Coffee Roasters in Rhode Island from10 a.m. to 2 p.m. on Sundays, 8:30 a.m. to 12:30 p.m. Monday through Friday, and additional evening hours 8 p.m. to 12 a.m. Sunday through Thursday.

Espwesso ran smoothly under Levan, Bernson, and Feiring’s guidance. But all three were concerned with how to secure the coffee shop’s legacy.

“Creating institutional memory is incredibly complicated in a student-run business,” Levan said. “We thought long and hard about how to pass along knowledge between generations and how to ensure that younger students entered the pipeline and were adequately trained to eventually run the shop.”

After leaving the University, the founders passed the baton to Jacob Eichengreen  ’13 and Hannah Cressy ’13, two of the original Espwesso employees. Since then, Espwesso has continued to be self-sufficient, employing students who are just as passionate about coffee as its founders.

As one might imagine, keeping Espwesso running smoothly comes with its own challenges and rewards.

“The bottom line here is that [being a student-run business] it’s really really hard,” Azulai explained. “To be essentially managing a business while taking classes is far more difficult and stressful than I ever thought it would be. When we run out of certain supplies (oat milk, for example) because of an ordering issue, or maybe simply because we forgot to place an order, it hurts the functionality of the café. But even with all the challenges, it is absolutely worth it.”

This article has been edited to reflect Espwesso’s hours this semester. They are open 10 a.m. to 2 p.m. on Sundays, not Saturdays.