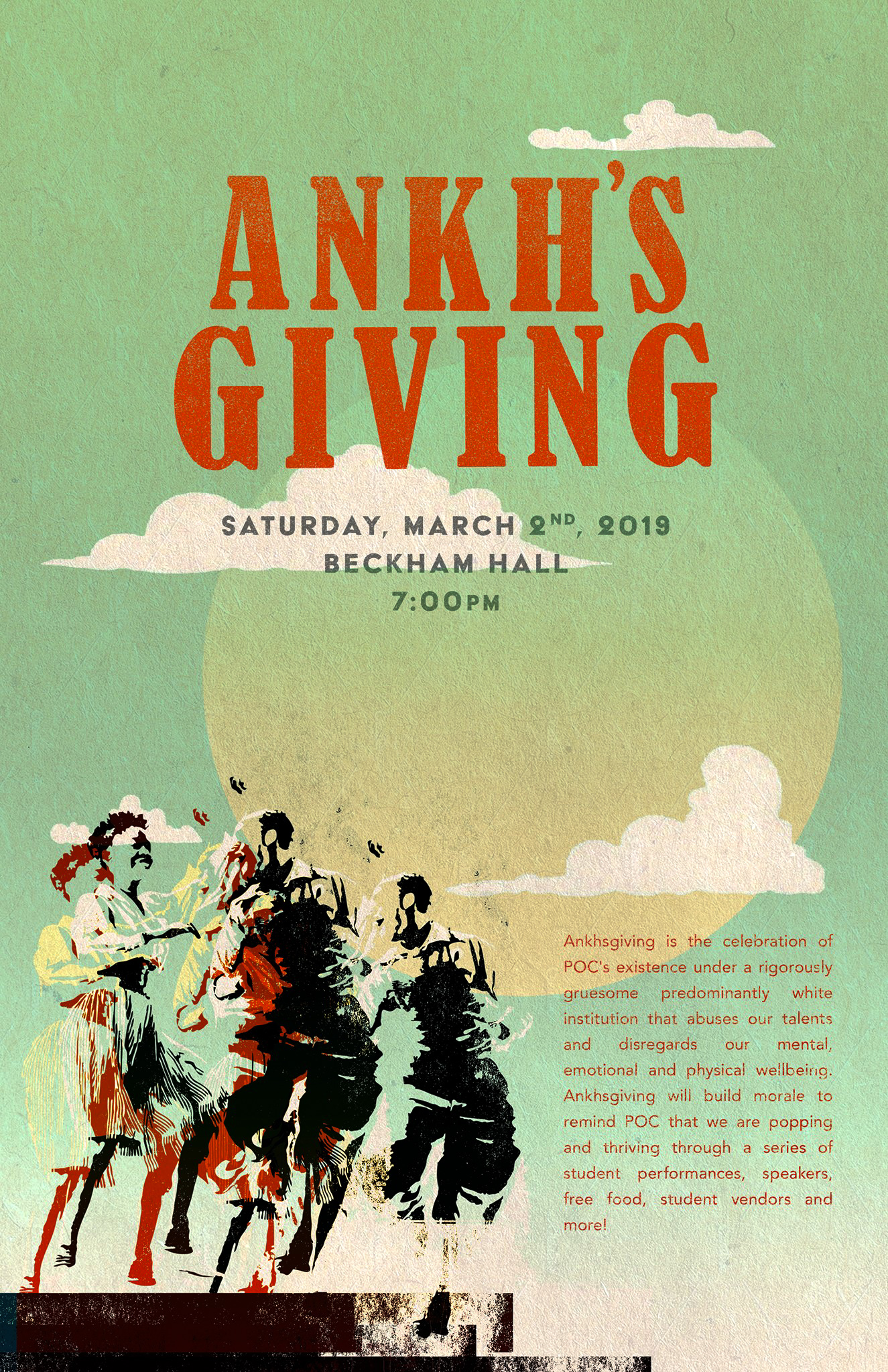 The first Ankh’sGiving, a celebratory event conceptualized by Arline Pierre-Louis ’19 for students of color (SOC) to gather and share their experiences, was held March 2 in Beckham Hall. Around 200 students attended the dinner, which featured various types of food, student performances, vendors, and a photo booth. Although the event was meant be a one-time occurrence, its success ensured that the Resource Center (RC) will put on Ankh’sGiving next year.

Pierre-Louis recognized that, while there are organizations for particular races and other identities, there are limited opportunities for all SOC to come together. She wanted to create an event for SOC to celebrate and foster a sense of community that was also independent from the University’s recruitment purposes.

“At the end of the day, we are all SOC trying to survive and stay in a PWI [predominantly white institution] that was not created for us,” Pierre-Louis wrote in an email explaining the event to SOC on campus. “It would only make sense for us to amplify our voice together as a POC community for a better quality of life and support system that we deserve here at Wesleyan. Why do we only come together at the beginning of the fall semester for a BBQ and the middle of April to recruit more SOC? Why can’t we have an event solely for us, to remind us of how much life we bring to Wesleyan?”

Pierre-Louis’ vision was inspired by the Haitian parties she grew up going to. She recalled her First Communion party, a Haitian tradition, as an example of the atmosphere she wanted to create for Ankh’sGiving.

“When it comes to parties, we go big,” Pierre-Louis said. “My parents put together a huge party for me, they rented the space, they got family members to make the food, there was music, there was alcohol—it was just great, it was an amazing experience. People ate, people laughed, and I was like, ‘Wow, we put in all that effort to make the space as organic as possible,’ and I thought to myself, ‘This is the way I want Ankh’sGiving to be.’”

She came up with the idea her junior fall, floating it by Dean for Equity and Inclusion Teshia Levy-Grant and Director of the Resource Center Demetrius Colvin when he first came to campus. Colvin approached her at the beginning of her senior year and told her the RC wished to help plan the event. The RC provided funding and a team of interns to help with the project, and they reached out to SOC representatives from various people of color (POC) collectives on campus to contribute, eventually forming a team of over 20 people working on the event.

While the event was initially planned to occur around Thanksgiving, logistical issues pushed the date to February, then March. The number of people planning the event dwindled down to seven—Pierre-Louis; Race, Ethnicity, and Nationality RC interns Ariella Reyes ’20 and Romina Beltran ’22; Shanté Hamilton John ’22; Kioni Marshall ’22; Leticia Rosario ’19; Lena Mitchell ’20—and the remaining members had to work long hours to pull the event off. Reyes, who coordinated the performers and did a rough draft of the decor, emphasized the effort Pierre-Louis put into the event.

“I would like to give a huge shoutout to Arline for making this vision become a reality,” Reyes wrote in an email to The Argus. “She was the core of the entire process and this event could not have happened without her. She put so much time and energy into making such a beautiful space for students of color, and we are so grateful to her.”

Holding the event in Beckham Hall, named after the first black Dean of the College Edgar Beckham ’58, was imperative to Pierre-Louis. She highlighted the importance of holding an event celebrating SOC there and was glad people were comfortable in that space, especially because other events for SOC are typically held in buildings like Russell House.

“People felt as if Beckham was for them because Beckham is for them,” Pierre-Louis said. “The upper-class white people use that space; if they can use that space, why can’t we use that space as well? Why can’t we claim that as our space as opposed to going to a location that’s far away from the center of campus?”

There was also a photo booth set up in the back of the room where a chair, interwoven with flowers, sat below a floral topiary ankh. Students used the setup to take photos throughout the night and publicized the fruits of the event on social media.

“I was just sick and tired of people getting dressed and putting on makeup just to walk all the way to Russell House, a dead white person’s house, just to take pictures on their haunted staircase,” Pierre-Louis said. “We could do so much better than that! There’s so much we could DIY.”

As people began arriving, student vendors lined the walls, selling artwork, jewelry, and body care products. For the event, the planning team ordered a wide variety of food, including Indian, Americanized Chinese, Caribbean, and Soul with vegan options and dessert, and there was a performance set consisting of music, dance, and spoken word.

A panel of SOC seniors spoke about their experiences at the University, including personal hardships and moments of triumph. While the organizers had originally planned to allow POC of all ages to sit on the panel, Pierre-Louis wanted it to consist of only seniors to convey a powerful message to underclassmen.

“[W]e would have more of an influence if all of these stories were coming from POC seniors who were about to leave so underclassmen know, ‘Yes, we went through all of things, but we made it and we’re about to graduate and no one can take that away from us,’” Pierre-Louis said.

For next year’s Ankh’sGiving, the RC will begin debriefing and planning after spring break, and a few members of the planning committee will be working on the event again next year. Beltran, who worked on coordinating vendors, spoke to the importance of holding the event again.

“I think it’s really important we acknowledge we’re sharing the Wesleyan community and we’re here to support each other and struggle together,” Beltran said. “It was really beautiful to see people spending their time on a Saturday night to come look at people’s art and talents, eat really good food, dress up, and take pictures.”