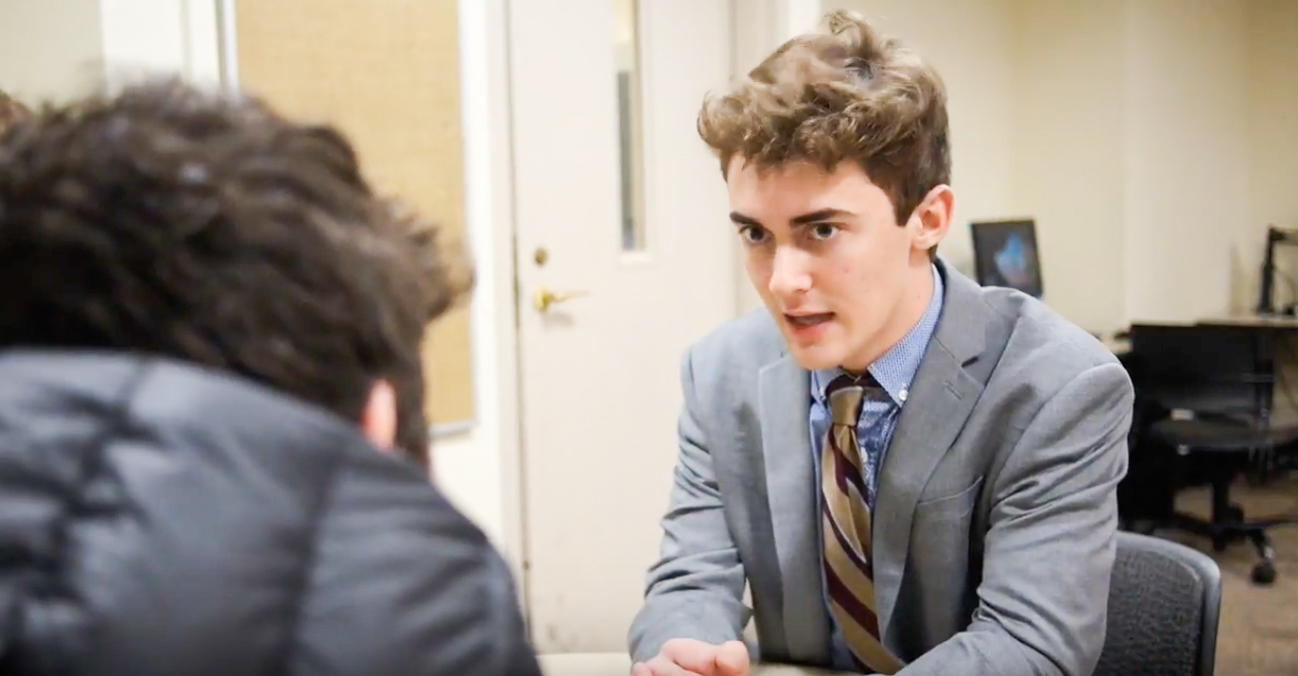 The Wesleyan Argus Podcast sat down with Jonesy Moore ’21, the creator of “Tech Gnomes,” a web series produced by Cardinal Pictures, to discuss the filming process and what viewers should expect for season two, which will be released at the end of this semester. The following is the transcription of an excerpt of the episode from Friday, March 1.

Sara McCrea: So you hold a lot of titles at Tech Gnomes. Can you tell us what you do for the show?

Jonesy Moore: I write it, I direct it, I edit it, I’m the camera operator, I’m an occasional actor. I do all the things.

Eleanor Raab: What inspired you to create it?

JM: My next-door neighbor, who will remain nameless, I guess, for this podcast, actually lied her way into ITS. She doesn’t know a single thing about coding and has been working there for a year now without getting fired. You walk in on her shift with a computer problem, and she just backs up your hard drive and gives it back to you and she’s like, “Oh, there’s nothing else I can do. I’m so sorry.”

SM: This was your neighbor at Wesleyan?

SM: Oh wow. And what building did you live in?

JM: Uh, the Butts…I feel like we’re narrowing in on who she is and I’m worried…

SM: No worries. What was it like for you to get started with such a big project?

JM: It was scary. I went to the Cardinal Pictures meeting and they were like, “For freshmen and first-time filmmakers we recommend you do like a one-to-two-minute film,” and I was like, “Seven of them and they’re all like 15 minutes.” I had done theatre directing, but it was different.

ER: Can you give us a basic plot rundown of “Tech Gnomes”? What is it about?

JM: It’s about two friends who, like—almost said her name—a person I know, lie their way into the ITS—Internet and Technology Services I think it’s called. It’s nothing dramatic or serious. Just fun.

SM: Can you take us through the process of starting to write an episode and then the production process until it goes onto YouTube?

JM: Yeah! It starts with usually a dumb conversation that I’ve had with my friends that I think, “This could be funny!” And I have a couple rounds of editing which is just me sending it to my friends, and they tell me what the major problems are, and there are usually some. Then we schedule it out, which is always rough. GCal [Google Calendar] is a savior. We go to film, four scenes a day depending on how long they are.

ER: So I know you’re filming season two right now. Was there any difference in writing between season two and season one? 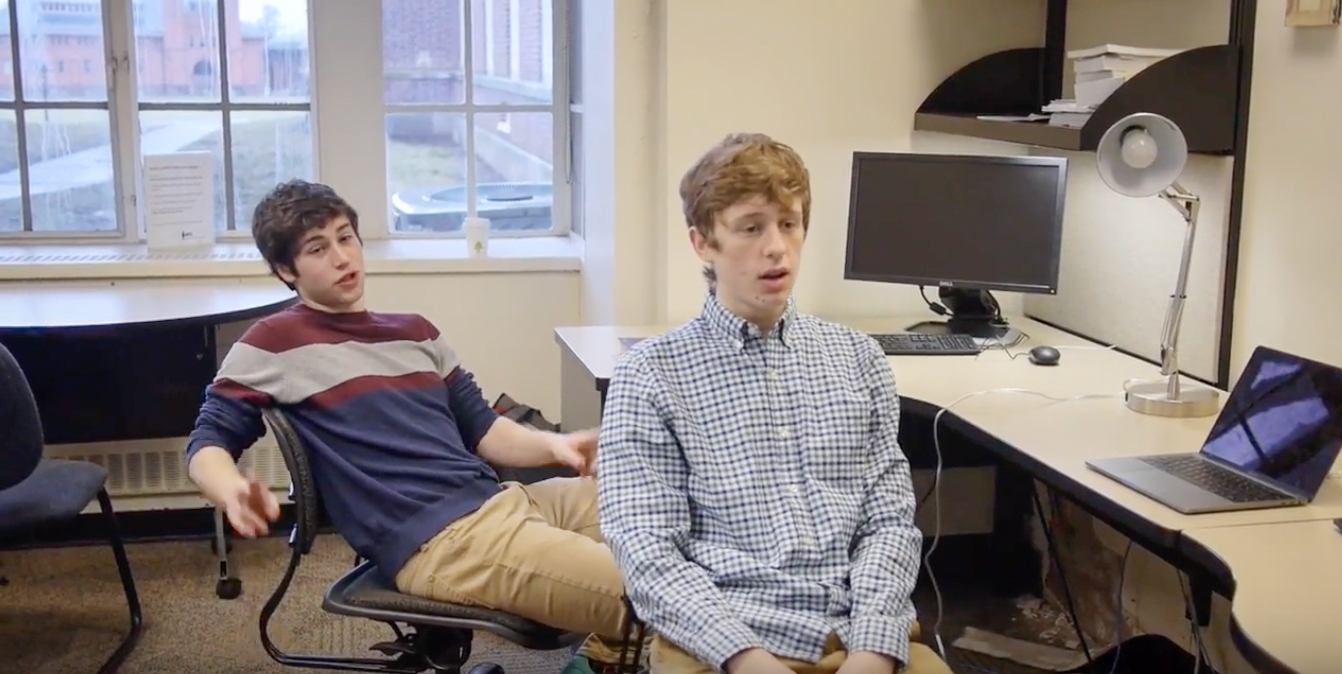 JM: Absolutely. Season two got weird. Everything in season one was very basic sitcom. It was me trying to figure out what I thought TV was, like “Oh these characters do this thing and there’s a romantic arc and whatever.” It came to a very, I thought…I was satisfied with my ending, but then the actors were all like, “What are we doing for season two?” and I was like, “We’re doing a season two? Okay!” Everything got completely crazy, the laws of the universe completely changed. There’s magic now. Bit of a spoiler: We kill off a character, or two. Yeah, things very much change. I originally went into it, because it’s a lot of work filming and editing, and I wanted to maybe do maybe half the episodes at half the time each. That didn’t happen. They’re all much longer.

ER: Did you like writing for actors you already knew better or writing completely unattached from people?

JM: Absolutely writing for actors I knew better. Especially with Matt [Grimaldi ’21], he plays Ben, and he has the wackiest dialogue and a very particular sentence structure that he speaks with, and I thought of what would be funniest when he said things.

SM: Great. And when will this next season be released?

JM: End of the year, probably. It takes a long time to film, we’re about halfway through right now. Also, I’m not the one entirely directing this one. We also have guest director Michael Bloom [’21] for our third episode. He’s almost done with his episode, but he’s still editing. Phenomenal to work with, very fun, and you will see how much better it is when you have an actual director who knows what he’s doing, and I’m excited about that. You can see in the first season my learning curve of just how a camera works, like, “Oh, now all the shots are focused. That’s nice,” or “Oh, the color is better, the sound is better,” as it goes on. He came in with all of that knowledge already. Also, the way I direct is more focused on my writing and how to make the jokes funny, and he came in completely unattached to the writing and was like, “Okay, how can we make this even cooler?” So he had all these cool, fun ideas on how to make it interesting.

SM: And how did you come up with the title of “Tech Gnomes”?

JM: It was what my friend in high school—he worked with the IT service in our school, and he referred to himself as a tech gnome all the time, and they worked out of this little cave room, and he would huddle over his computer. People would come in, and he would be like, “Hello, let me fix your computer.” And I was like, “Ah, that’s a funny phrase you said. I’m going to use it one day.”

ER: And do you have any advice for Wesleyan filmmakers looking to do something similar?

JM: Honestly, just go out and do it. I didn’t know what I was doing going in, so if you have a vague idea of something you want to do, it’s very accessible. [Cardinal Pictures] gives you the tools to do it—the camera, the equipment. They don’t necessarily help you with “how,” so there’s a pretty steep learning curve of knowing what you’re doing. But I mean, if someone could come in with no experience and do that, I feel like if you’ve held a phone camera before, you can probably do it.

The Wesleyan Argus Podcast releases new episodes every Friday on Soundcloud at https://soundcloud.com/arguspodcast.

Sara McCrea can be reached at smccrea@wesleyan.edu and on Twitter @sara_mccrea.

Eleanor Raab can be reached at eraab@wesleyan.edu and on Twitter @eroseraab.