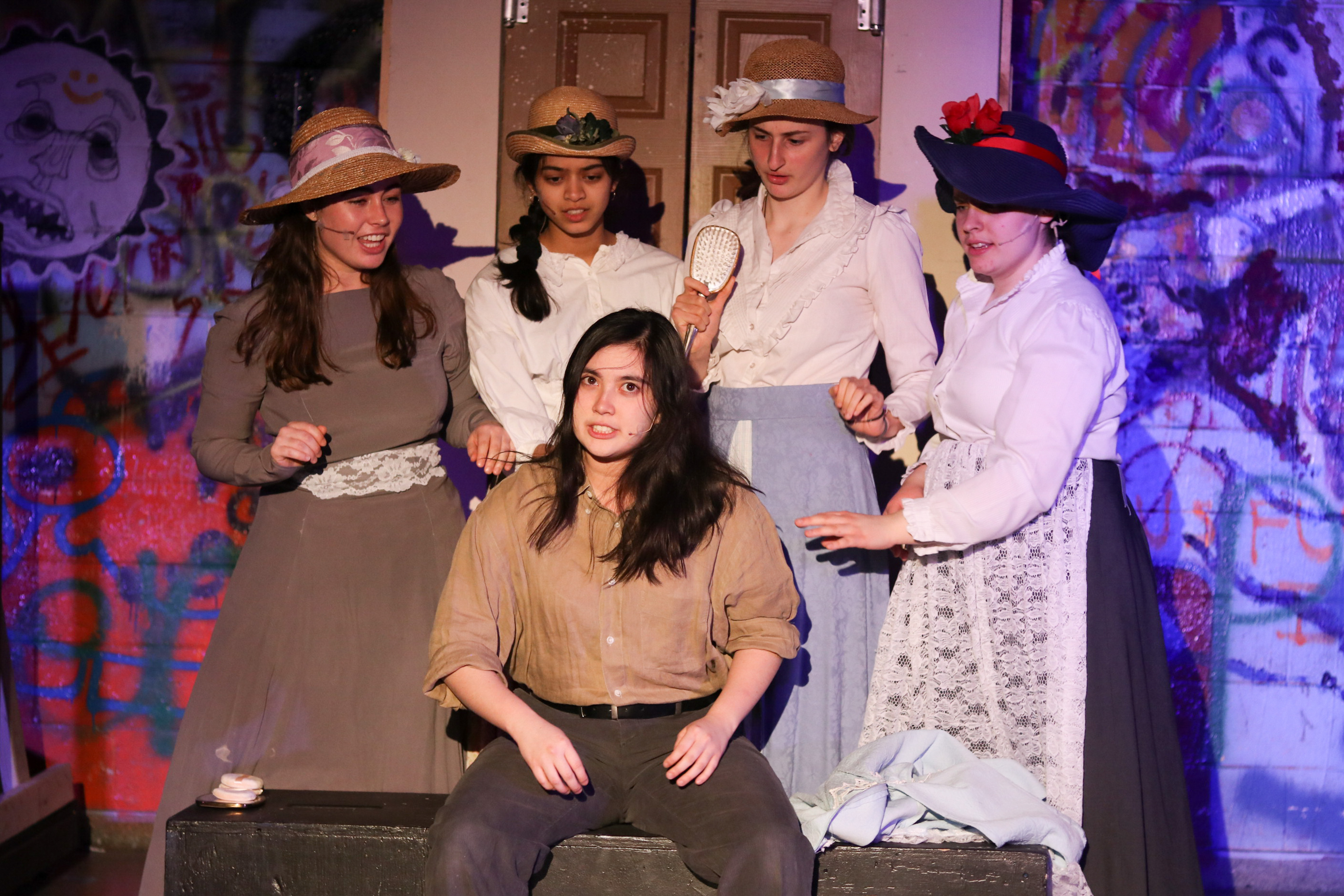 Ancient Romans used to use silphium, a North African herb believed to have abortifacient properties, as a kind of old-school Plan B. The plant was widely known and hugely popular—so popular, in fact, that some believe Roman demand for the contraceptive is what ended up driving it extinct. All that is to say, while birth control sometimes feels like a uniquely modern concept, people have been trying to knock boots without getting knocked up since time immemorial. So while brand new student production “Snake Oil,” which was written and directed by Brooke Kushwaha ’20, with music and lyrics by Payton Millet ’21, might not be historically accurate per se, there’s certainly a grain of truth to the idea of birth control taking a 1900s town by storm. The musical, combining the charming grifter protagonist of “The Music Man” with the affectionate blasphemy of “The Book of Mormon,” follows father-daughter con artist team Stephen (Lucas Mani ’19) and Layla (Jana O’Donnell ’19) who travel across the country selling a supposed cure-all elixir that doesn’t actually do anything useful. Or so they think.

Unbeknownst to Stephen and Layla, whose sales plan consists of sweet-talking anyone that they can into spending money and then skipping town once everyone realizes they’re peddling junk, their snake oil is actually an effective contraceptive. But while they might not realize the value of their product, the residents of Jasper, their latest stop, quickly catch on. Jasper—the kind of well-starched, God-fearing town where church barbecues are an unmissable social event—doesn’t look like the kind of place that would have a high demand for anything as sinful as birth control, but Stephen’s concoction proves a surprise hit. Naturally, Stephen and Layla’s business ruffles some feathers as well, particularly those of the town pastor Reverend Jacobs (Nick Ticali ’20), who sets out to eliminate the pair and their business from his good Christian town. 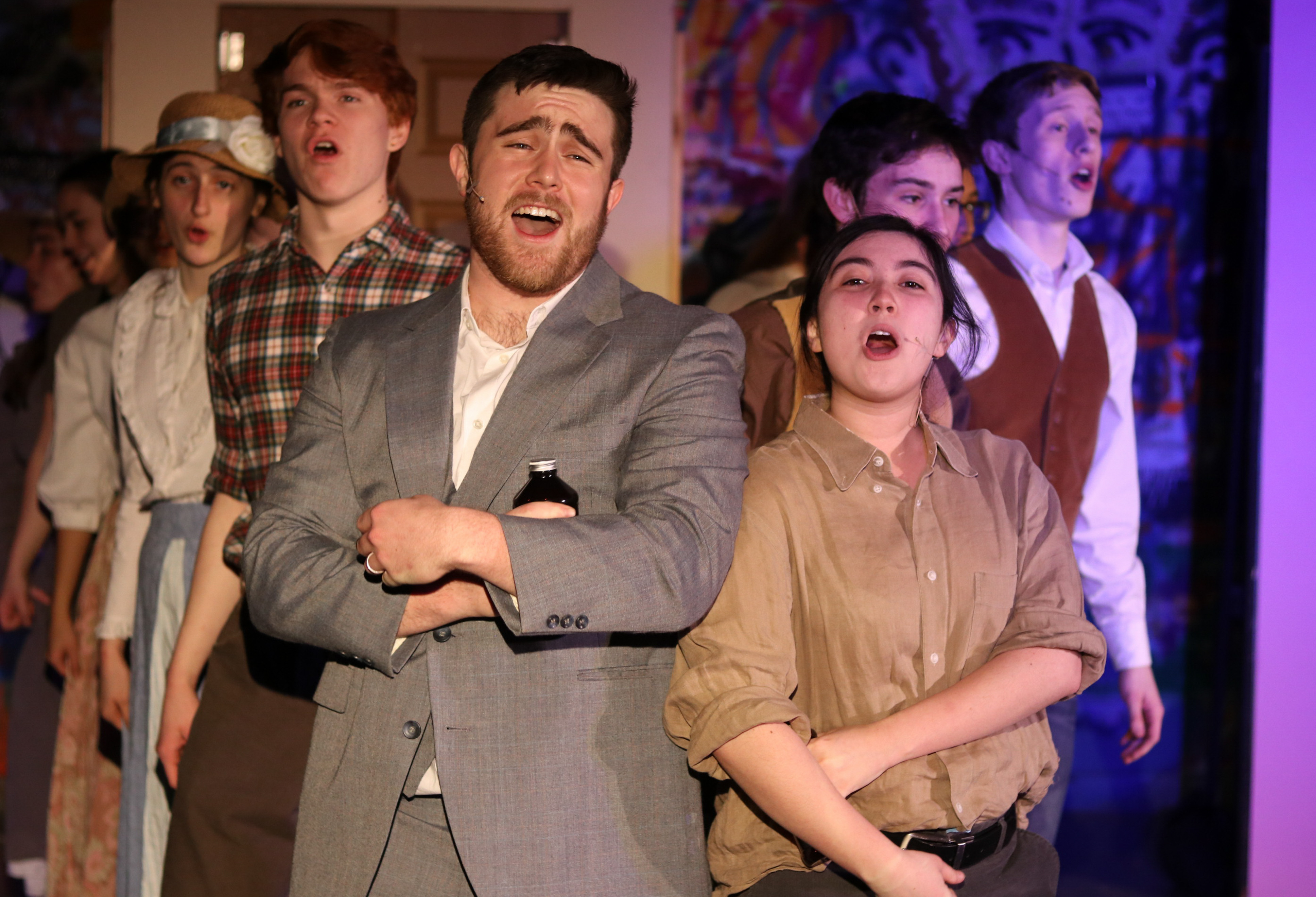 The ratio of music to spoken dialogue in “Snake Oil” is relatively high, so it’s a blessing that the show’s songs are pretty much uniformly excellent. Occasional sound issues (which seem to plague every production that goes up in WestCo) notwithstanding, the music of “Snake Oil” demonstrates a level of polish rarely found in student-written productions. Millet is a formidable songwriter with a knack for channeling the jazzy, infectious energy of old school Broadway—several of “Snake Oil’s” songs sounded almost familiar, as though they belonged on someone’s musical theater Spotify playlist. This skill is most on display in the show’s faster-paced, full ensemble numbers, one of which—“God Will Test,” a fire-and-brimstone sermon on the dangers of giving into lustful urges—I’m still humming 24 hours after first hearing it. But it’s the slower, quieter songs—such as “The Time is Mine,” in which a young woman named Olive (Maria Noto ’21) muses on the restrictive expectations of her town and the new freedom provided to her by Stephen’s birth control—that provide the majority of the show’s emotional resonance.

“Snake Oil” might be worth seeing for its musical numbers alone, but luckily that’s not all it has to offer. The story does indulge in occasional clichés. Chief among them is Stephen’s late wife (Natasha Jones ’22), who never speaks onstage and is revealed to have died in childbirth, making her one more of a long list of fictional women whose tragic deaths only matter as character development opportunities for the nearest man. But these weak spots are outweighed by a delightful cast, whose energy never flags (even when their fake Southern accents do) and by a sharply funny, cheerfully sacrilegious script.

“Snake Oil” is a comedy above all else, but the show does offer a few pointed observations about the freedom of women and the people who fear it. Olive’s character is one prime example of this; while her boyfriend begs her to marry him, Olive doesn’t feel like settling down yet. She yearns to do something more with her life than raise a family and feels like her options are limited in Jasper. Olive’s growing relief when she realizes she has been accidentally taking birth control—which allows her to avoid the prospect of children until she feels fully ready—is palpable, and relevant. Women may get married later these days, but the constant cultural pressure to reproduce still weighs on us in a way it doesn’t for young men. Even outside the conservative confines of Jasper, fearing motherhood isn’t a sentiment girls are supposed to express out loud.

“Is a life beyond conception/simply so hard to conceive?” Olive sings in “The Time is Mine.” In the real world, the answer remains unclear, but in Jasper, at least, the answer seems to be yes.