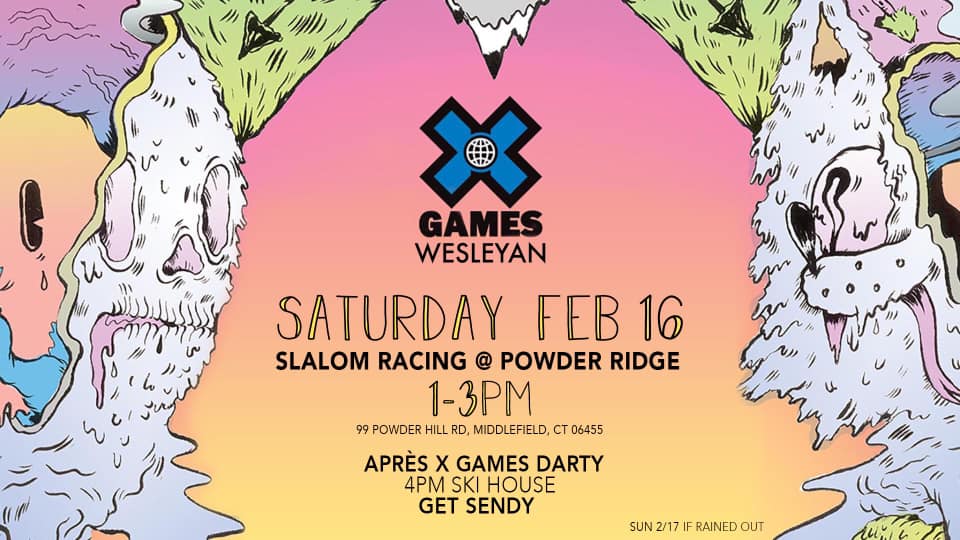 “We’re not Division I, we’re division FUN!” yelled Darcy Neureiter ’18, proclaiming one of the Wesleyan ski team’s many fun phrases in the middle of Exley.

Her enthusiasm speaks to the energy of the club team that has been racing down the slopes for the past five weeks. As part of the United States Ski and Snowboard Association’s McBrine Division—and not part of the NCAA, with pride—the team’s traveled up and down the East Coast competing with schools like Yale, Amherst, and Brandeis.

“Competition is stiff out here,” Neureiter said. “I think we have a chip on our shoulder, mostly with Yale. We like to yell YA-lay, pretending we’ve never heard it before. The Harvard of Connecticut? Oh wait, that’s us!”

In order to keep up with the competitors, the team’s season starts with three evening trainings in the fall. In January, the team also hosts the infamous ski week.

This year’s ski week boasted 50 students, both members of the club team and those just interested in shredding the gnar. The week before school started, the group traveled to Jay Peak Mountain in Northern Vermont, which Colorado-native Neureiter says has some of the best skiing on the East Coast.

“What’s so beautiful about ski week is that so many people across campus end up going,” Neureiter said. “It’s this very special space where, for five magical nights, this eclectic group of Wesleyan comes together.”

When the semester starts up, the team takes off the first five weekends of school to travel to different mountains on the East Coast. Each week, members can sign up to compete in the 25 racer slots available for the group. Although veterans get priority, the team’s hopeful about the newbies who have been eager to come out and compete.

Neureiter notes that this year has been a year of building up the team, which lost many seniors last May. They’ve used the club fair, alumni network, and fundraisers to up their numbers and get more students to come out and race.

“We’re really trying to grow as a club,” Neureiter said. “It’s always been sort of a hidden gem.”

Not only has the team actively recruited members, but they’ve also been focusing on creating safer and more positive team dynamics. The team had mandatory bystander intervention training this year for all members and anyone going on the ski week trip.

“There aren’t bylaws here; there aren’t parameters,” Neureiter said. “We have to work harder to make sure women are always feeling comfortable. With co-ed sports, it’s always a balance to make sure there’s gender equality in the space as much as there can be. We want everyone to feel comfortable and welcome and to engage in what we’re doing.”

While the team’s numbers and relationships grow stronger, their season ends with races this weekend. But the team won’t have to worry about their travel and lodging. These races are at Powder Ridge Ski Area, just 15 minutes from campus in Middlefield. While the team trains at this mountain during evenings in the fall, they haven’t raced there in four years.

Neureiter, along with co-captain Justin Borenstein-Lawee ’19 and the team’s upperclassmen, want to take advantage of the home-turf advantage they’ll have this weekend.

“If we’re staying at Wesleyan, we’re not going to be on a bus together, we can get our shenanigans, get everything rolling…. We wanted to make this special,” Neureiter said. “If we’re skiing at home, we want to have people come out. How can we make this an event? We have to make it the X Games.”

The winter X Games, famous for their X-treme skiing and snowboarding events, usually take place in their snowier mountains of Colorado. But why not do the same thing in central Connecticut?

“Because so much of the ski team is about having a blast, living life to the absolute fullest, and partying up a storm, we thought people can come watch us race, party at the base of the mountain if they want…and afterwards we can go to ski house and have an après ski party!” Neureiter exclaimed.

The ski-team fiend is aware of the après ski party that happened earlier in the year.

“It was fake because the ski team wasn’t there throwing it,” she said. But this weekend, she assured, will be different.

“We can go back to Wesleyan and have a blast in our ski gear. Dance party,” Neureiter said.

The team races slalom on Saturday, an alpine skiing and snowboarding race that involves winding between a course of poles. Each competitor races the course twice, once in the morning and once in the afternoon. The Wesleyan X Games are scheduled during the afternoon races from 1-3 p.m., with a party on campus to follow. Bring your cowbells and celebrate Wesleyan’s extracurricular hidden gem!

“Wesleyan ski team is about bringing people together and getting weird,” Neureiter said. “When I think about keeping Wesleyan weird, the ski team I think really epitomizes that philosophy. We get weird on ski team and it’s really fun, and it’s a very special space. I haven’t really encountered anything like it and I’m not sure I will again. So I’m pretty sad that it’s ending, but it’s about honing general comfort with people…zaniness, weirdness…. We have a lot of fun.”