Googly Eyes and Tiny Hats: Wes Culture on the ’Gram 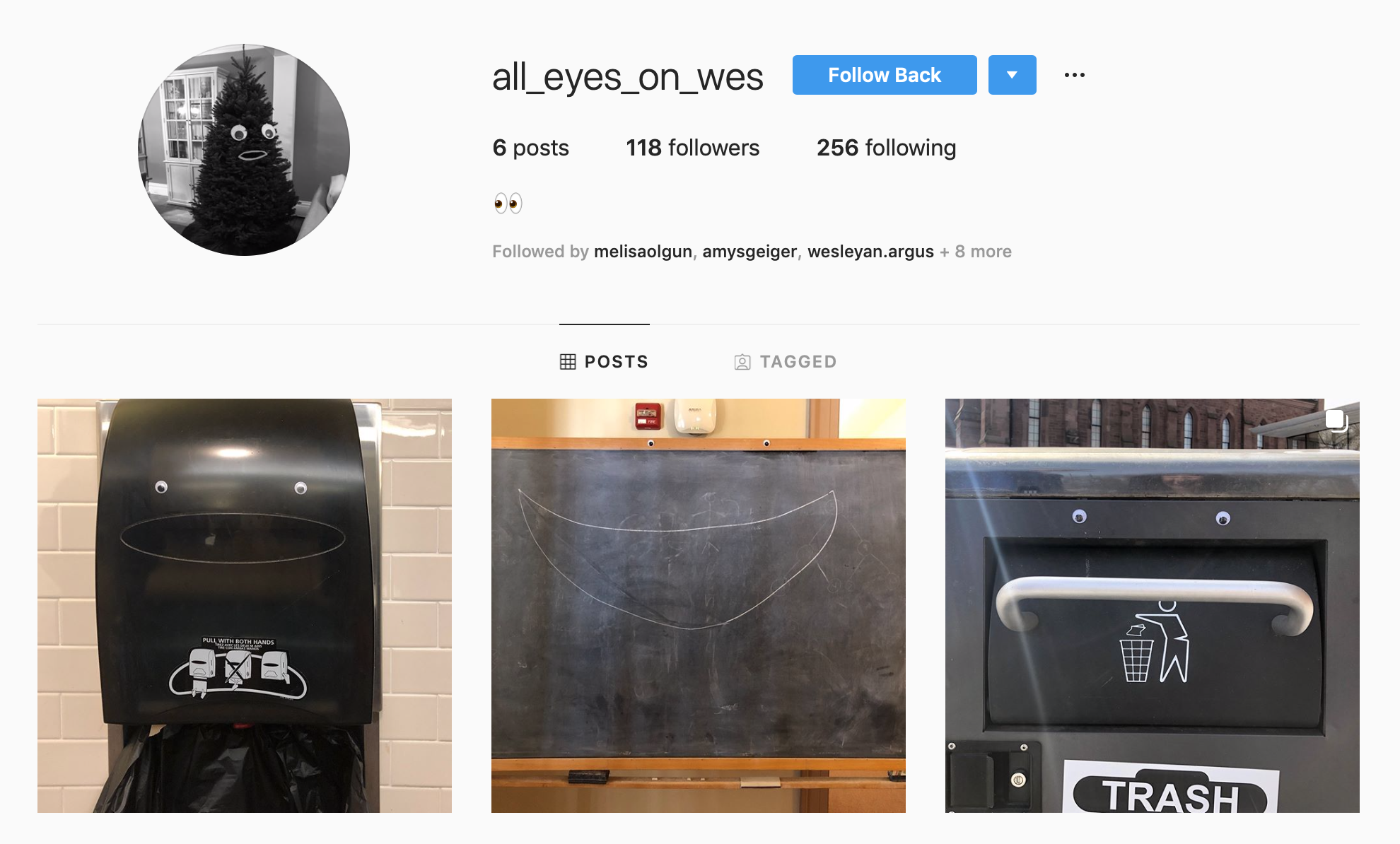 You’re not at all surprised when @all_eyes_on_wes follows you—this is the second Wes-related, impossibly niche Instagram account that has followed you this week alone. When you click on their handle, you arrive at a page with only six posts, all of them featuring googly eyes placed on unsuspecting inanimate objects. You wonder when it came to this, when googly eyes became Instagram-page-worthy, and when Instagram became a platform to showcase Wesleyan’s oddities.

Of course, this isn’t the first time you’ve come across a page like this. You might remember fondly some of the accounts that have passed novelty and become household names, like @wesworn, @overheardwes, and @tiny_hats_wes. And you might have just become aware of some new contenders, like @wes0ck and @wesconfess. Then, of course, there’s @barstoolwesleyan, superstar of the loud side.

@all_eyes_on_wes is simply the latest in the trend. The page is run by two old pals, who started placing googly eyes in unusual places last spring and only just got around to publicizing images of their work. The two admins paired up and created the account at the end of last semester when one admin left the other alone in their room as they headed to see the Terp show, and the other plastered the entire room with googly eyes.

“When I returned…I discovered that there were pairs of googly eyes that just kept popping up all over the place,” the recipient of the prank reminices. “I’d pull out my hair dryer, and it’d have a face, you know? That is when I hopped on the googly eyes train.”

The idea for a scavenger-hunt for googly eyes across campus was born. Hoping to inspire others to follow in their footsteps, the page’s creators have been posting pictures of eyes glued to everything from salt shakers to chalkboards. Despite their lighthearted tone, the admins of @all_eyes_on_wes insist seriously that their account is serving the Wesleyan community, following in a tradition generations in the making:

“It’s really inspired by my grandmother, who has always been a big advocate for whimsy in general,” the original googly eye rascal explains. “We wanted to create little moments that maybe interrupt your daily routine for just a small, brief window of time and spread some infectious joy into other people’s lives. And I think googly eyes are such a simple yet effective way of imbuing your day with that sort of energy.”

@all_eyes_on_wes is starting late in the game, and only has 118 followers so far. They’re up against veritable Instagram behemoths like @wesworn, which has been around since September 2017, and whose massive popularity serves as inspiration for most of the pages that have been popping up in your feed—@all_eyes_on_wes included.

“I was shocked and honored when some people reached out to discuss how they should start accounts of their own,” Levi Baruch ’21, founder of @wesworn, said. “I have no idea what I’m doing.”

This, of course, is modesty. Since its founding, Baruch’s account has gained over a thousand followers (the count currently stands at an impressive 1031, but this has dipped from its peak last year). Even at the height of Insta fame, @wesworn maintains the vision that Baruch set out with since, apparently, almost the first day he arrived on campus.

“When I first toured Wes it was clear the community was different from what I had known before,” Baruch explained. “We bring all sorts of upbringings and ideologies to this campus, offering a broad spectrum of outward expression. Clothes are a clear way to explore and document this vibrant community of ours. I wanted to build something that the campus kept tabs on, something that was engaging and spurred interconnectedness through the context of what we wear. I pulled up last year and started talking to people and taking pictures two weeks in.”

Baruch does his best to feature all kinds of people—and of course, all kinds of styles— on his page, but often finds himself resorting to meeting new Wes students in order to keep his content fresh.

“The practice forced me to approach intriguing strangers and start talking,” Baruch told The Argus. “In turn, they showcased a facet of their personhood, sharing something that made them feel good.”

This man-on-the-street approach is markedly different from that of some of the other accounts, in particular one whose creators take their anonymity as seriously as they take their content—pictures of people wearing some particularly small headgear.

“It’s a pretty well kept secret,” said the anonymous founder of @tiny_hats_wes, speaking about their IRL identity.  “Now that I’ve kept it a secret so long, I want the reveal to be kind of exciting…there’s something enticing about it.”

Until the big reveal, @tiny_hats_wes hopes to keep its audience satiated with a fairly regular stream of— you guessed it—tiny hats. The idea was inspired, according to the admins, by a similar page based in New York, @tinyhatsnyc. But as simple as it sounds in theory, the page’s admins have fairly strict requirements when it comes to submissions.

“Some people just submit things that are like, little party hats, which I don’t really consider a tiny hat,” they said. “And some people submit beanies that are, like, to here [motioning over the ears]. That’s not tiny enough! Above the ears is what I’m looking for.”

This kind of careful consideration has become necessary over the past year, as @tiny_hats_wes has grown to over 1000 followers and relies almost entirely on submissions to maintain their page. With great popularity, of course, comes great responsibility, something the page’s admin has been reflecting on as their page continues to gain visibility.

“Something that I’ve tried to do, pretty consciously, is not just have white fuckboys,” they said. “I think on the account now it’s mostly non-white, non-male people wearing tiny hats…. I know it’s totally silly, but now I have an audience, I don’t want to have a page full of fuckboys. We see enough of them already.”

This kind of scrutiny of men served as the inspiration for another Instagram page as well.

“I’ll only suck his dick if he’s vegan,” a student in the lobby of Exley yelled, and @overheardatwes was born. The account began in January 2018 in the Hewitt lounge. Four friends were hanging out, eating vegan mac and cheese, when one recounted hearing that fateful phrase earlier that day. This piqued the interest of the group, especially one member, who recalls their reaction.

“I thought it was so funny,” the soon-to-be-admin explained. “‘Cause that’s just, like, ME, like literally me. And we were all dying. And then we just continued the conversation and then someone walked through as we were talking about this and said this ridiculous thing, ‘Let’s chase with kombucha tonight,’ and another person was like, ‘We ALWAYS do that.’”

Following that moment, the two admins reflected on the intrinsic Wesleyan quality of the two quotes and how well each quotation worked to sum up the Wes spirit, and decided that the @overheardatwes Instagram account was necessary, drawing inspiration from @overheardla and @overheardnyc. Like the googly eye fiends at @all_eyes_on_wes, these admins stress the importance they place on bringing levity to campus. In addition to making others laugh, the @overheardatwes staff also derive a lot of joy and pride in the Wes student body from running the account.

“Looking through our DMs just serves as a reminder that we’re not the only funny people here, that we’re a really silly campus,” they said.

Yet another example of that on-campus silliness is @wes0ck, an account hosting an endearing collection of images of socks on Wes students’ feet. Like @wesworn and @tiny_hats_wes, this account capitalizes on the specific homogenous style of the Wes student body. The anonymous admin of @wes0ck admits that their intentions are pretty trivial.

“@wes0ck is meant to be silly for silly’s sake,” the admin explains. “There are a lot of cool socks out there on this campus and I want to bring attention to them…. None of the posts show who is actually wearing the socks so that we can appreciate the little flair of character in Wes outfits without it being tied to a particular person.”

This seems to be a common theme among these pages—silliness, yes, but also an inclusion of all different sorts of people who represent Wes culture. Despite aesthetic differences, all of these Instagram accounts are working toward similar goals: They are attempting to remind the Wes population, and the world at large, of our own quirkiness. And more and more students seem to be answering the call to action, starting Instagram accounts and fighting to keep Wes weird. Perhaps the new account on campus, @all_eyes_on_wes, best explains the phenomenon:

“I thought, I need to contribute to these daily acts of whimsy to better the lives of Wesleyan students,” they explained. “So, [the other admin] and I put together our resources.”

And the rest, as they say, is Instagram history.