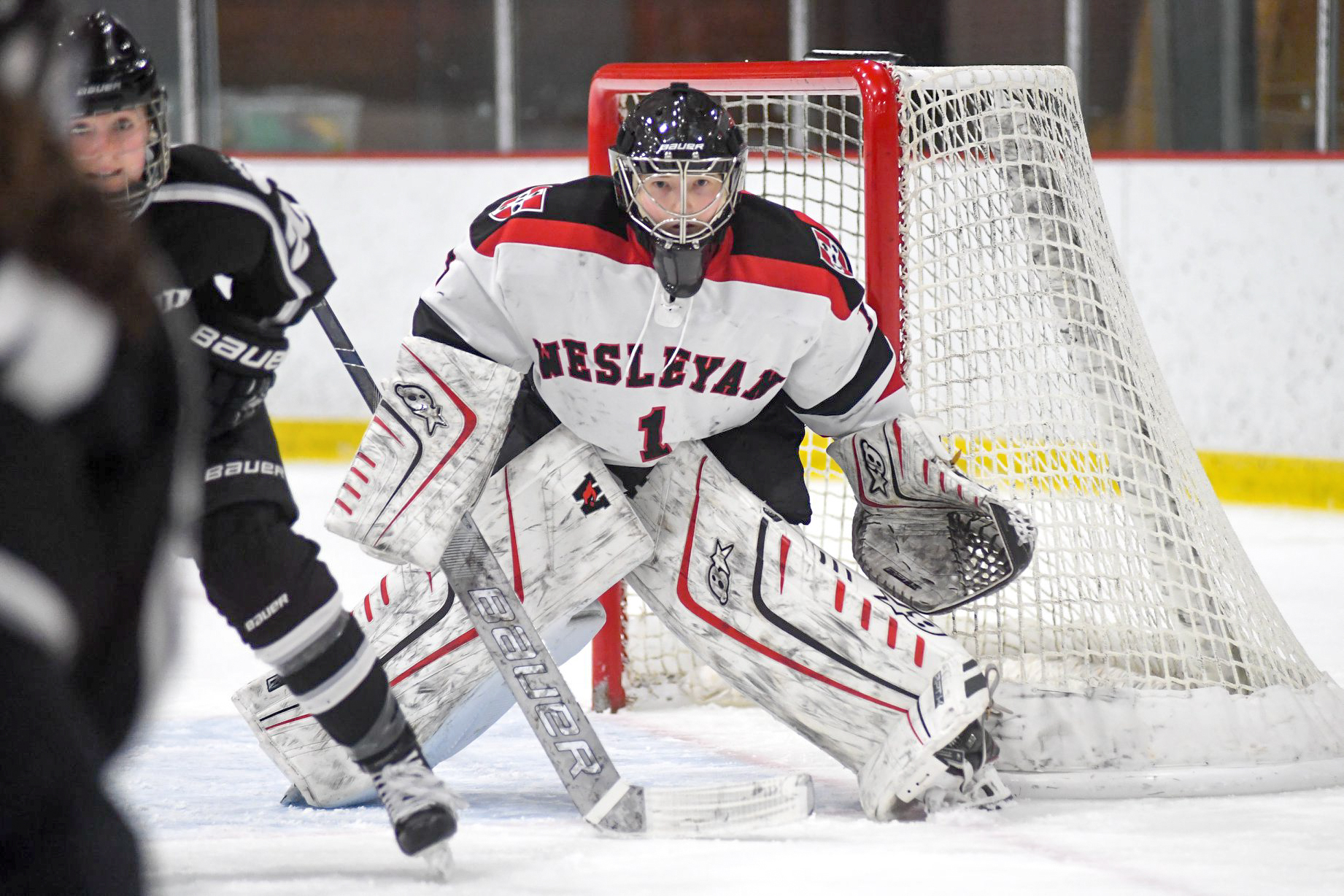 The women’s team had a historic weekend, going 1-1 and upsetting sixth-ranked Middlebury 1-0 on Saturday afternoon. This victory pushed their record to 6-12-1 and 3-8-1 in conference. For the Cards, the win was the first against Middlebury in program history, pushing their all-time head-to-head record to 1-58-4. Sarah Goss ’19 scored the lone goal in the second period for the Cards, and Allegra Grant ’20 made 38 saves in the shutout victory.

Captain Grace Keogh ’19 was happy with the way the team played in the victory.

“The combination of playing as a composed unit, picking up our communication, and Allegra Grant’s phenomenal game in net helped us to get Saturday’s crucial win,” Keogh said.

Keogh said that Friday’s close loss also made the team believe in themselves and that they could pull the upset.

“After Friday’s close game, each of us fully believed in our ability to win on Saturday,” Keogh said. “Bringing our same energy and making a few adjustments to our approach helped us accomplish that goal.”

Next up, the Cards have a crucial home and home on Saturday and Sunday against Trinity, where they look to keep the energy and effort from their win going.

“We need to carry the momentum we gained from Saturday’s huge win into the final two weeks of the regular season,” Keogh said. “Now that we have established ourselves as a threat in this league, playing with confidence and grit will be crucial for us to get points out of our last four NESCAC games.” 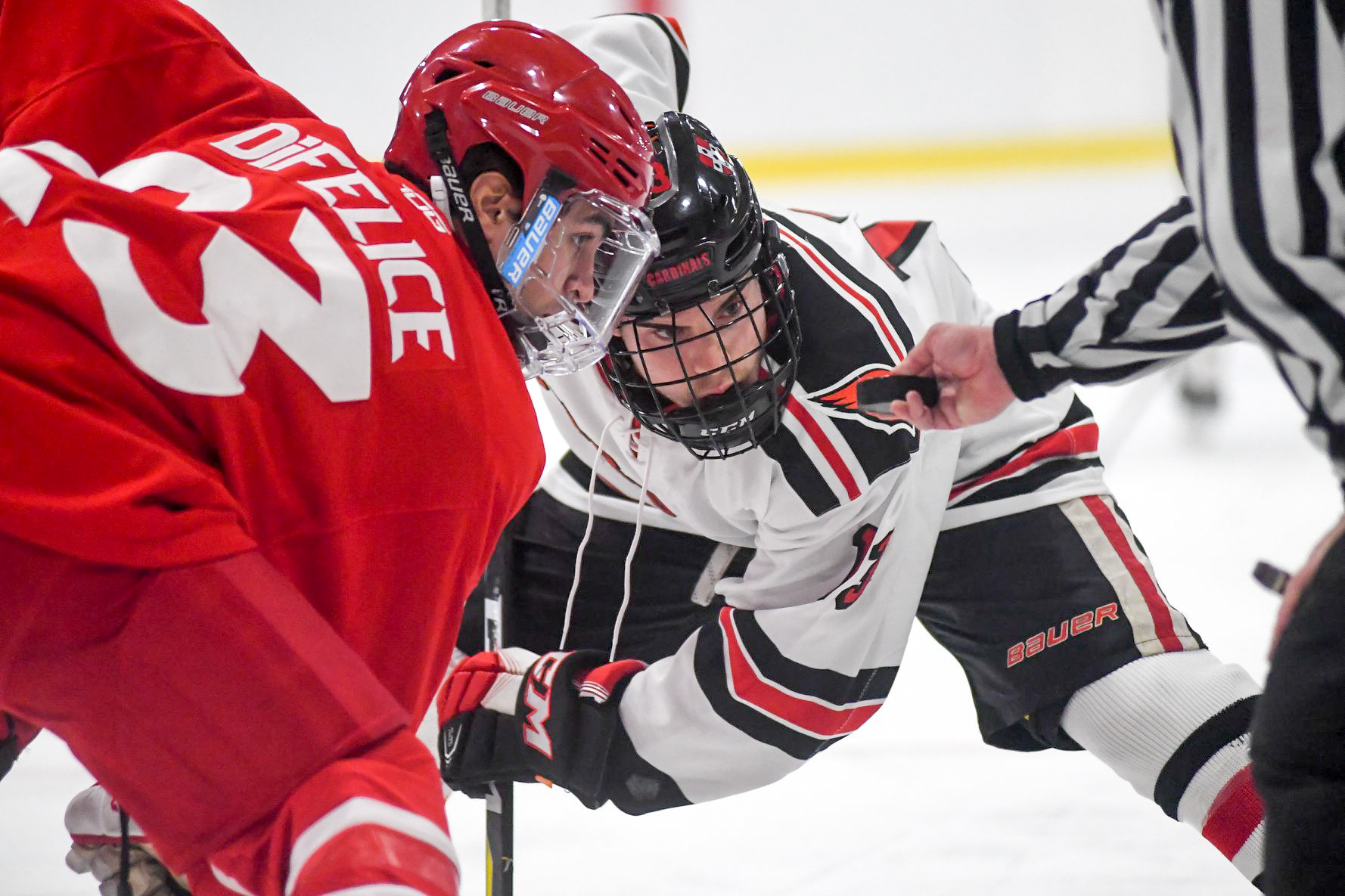 For the second time in three years and just the third time in the last 32 years, men’s hockey has won the Little Three Championship. The Cards clinched the title by defeating Williams in OT, 2-1, after being down 1-0 in the final minutes of the third. This win, combined with a 2-0 victory over Middlebury the night before, pushed the Cards’ record to 14-4-2 overall and 12-0-2 in conference play.

In the thrilling win over Williams, Walker Harris ’20 scored the tying goal in the third period with just over a minute to go. Andy Espinoza ’19 achieved a similar stunning feat, scoring with 10 seconds left in overtime to take the Cards to victory.

Tim Sestak ’20 earned his second straight NESCAC Player of the Week award for his defensive efforts. He made a great 33 saves for the team, which were key in keeping the score at 1-0 until the Red and Black tied it up late in the third.

“The key to coming back was to never stop believing,” Captain Chad Malinowski ’19 said. “We had been playing well the whole game, generating a lot of scoring chances, and we just stayed positive, knowing that we were eventually going to score. Obviously it came after we had pulled the goalie, but I think there was a strong belief in our team that we were going to come back.”

The team performed fabulously in OT to win even though they could have ended with a tie.

“In terms of winning in OT, I think everyone was a little shocked. Most games that go to OT end in ties but Tyler Wyatt [’20] and Spencer Fox [’20] made an unbelievable play to be able to get the puck to Andy Espinoza on the back door, and he took care of the rest.”

Malinowski added that winning the Little Three in two of the last three years truly shows the team’s progress.

“At the beginning of the year, winning the Little Three is always one of the team goals and is never easy to do,” Malinowski said. “Amherst and Williams are great programs and always seem to be fighting to finish in the top four in the league. To have won it this year is truly a special feeling not only for us, but for the program. From 1972-2016, Wesleyan won the Little Three twice, the last time being in the 1986-1987 season. Having won the Little Three in two of the last three years is a testament to how far this program has come.”

Next up, The Cards take on Bowdoin and Colby at home on Friday and Saturday afternoon, respectively.

Malinowski says it is important for the team to remain focused on the task at hand during these last few home games.

“Our work isn’t done,” he said. “The Little Three Championship is only our first goal. We are in a great position to win the regular season championship and make sure that the path to a NESCAC Championship goes through Wesleyan, but we have to take it game by game.”

Malinowski is looking ahead to more ’CAC competition, especially games to come on the Wesleyan ice.

“We have a big home weekend coming up with Bowdoin and Colby,” he said. “Our fans have been great all year, and we haven’t played at home in two weeks, so we are looking forward to playing in front of them.”

Men’s hockey will play at home this Friday, Feb. 8 at 7 p.m. in a special “Hockey Fights Cancer” game. The team will honor Connor Albert, a member of the squad through Team IMPACT who passed away last year.

Their final home game takes place less than 12 hours later on Saturday at 3 p.m. The Red and Black will honor their seniors in a competitive matchup against Colby.