“Fyre Fraud” vs “Fyre”: A Tale of Two Documentaries 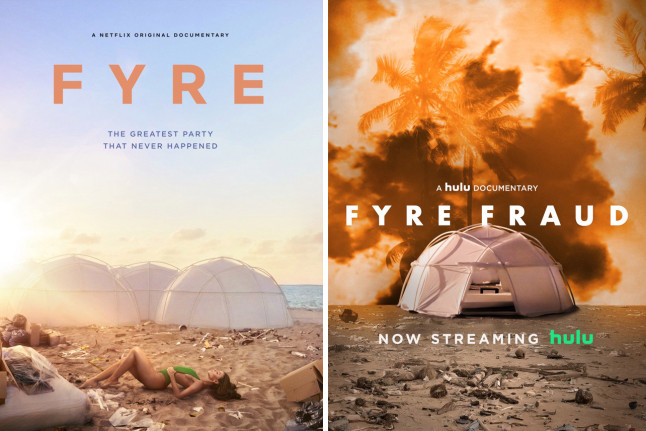 On April 28, 2017, something big was supposed to happen. It was something that was supposed to be life changing, record breaking, something that would transform millennial society as we know it. On that spring day, hundreds of social media influencers and people from around the world were to gather for a music festival on Great Exuma in the Bahamas. It was called Fyre Festival, an event dreamed up by entrepreneur Billy McFarland and rapper Ja Rule. Tickets cost upwards of $1500, with VIP packages priced all the way up to $12,000. Maybe it was called Fyre Festival for good reason, because the festival went up in flames. Well, not literally, but just about. The “private villas” festival goers had been promised turned out to be FEMA tents; the “private jets” became economy-class seats on a large commercial plane; and food was non-existent on the island, aside from a piece of bread and a rubbery-looking slice of American cheese served to guests as part of the “luxury meal plan.” On top of that, just about every music artist cancelled their performance when they got word of the desolate conditions. Shortly after things started to go wrong, co-founder Ja Rule put out this tweet (which, to this day, is still my life motto):

“We are working right now on getting everyone off the island SAFE that is my immediate concern… I will make a statement soon I’m heartbroken at this moment my partners and I wanted this to be an amazing event it was NOT A SCAM as everyone is reporting I don’t know how everything went so left but I’m working to make it right by making sure everyone is refunded… I truly apologize as this is NOT MY FAULT… But I’m taking responsibility I’m deeply sorry to everyone who was inconvenienced by this.”

Fast forward two years, and Billy McFarland has been sentenced to six years in prison after being convicted of mail and wire fraud for his involvement in the Fyre Festival. Earlier this month, two documentaries were released, by Hulu and Netflix, chronicling the festival and the events that led up to McFarland’s conviction. As someone who obsessively followed this entire mess of a festival over the past few years, I eagerly binge-watched both documentaries in one night.

“Fyre Fraud” was the first Fyre Festival piece to be released, premiering on Jan. 14 on Hulu. This documentary definitely had something that Netflix’s doc didn’t, and that was an on-camera interview with McFarland. It also interviewed some more important figures in McFarland’s life—such as his girlfriend, Anastasia Eremenko, and his parents—which allowed viewers to learn more about his childhood and personal life. The producers of this documentary obtained a lot more footage of would-be concert-goers arriving to the Bahamas, as we saw firsthand video from inside the infamous yellow school buses that were sent to the airport to pick guests up, as well as shots taken just a mere 24 hours later of guests stranded without food, even passing out from heat exhaustion in Exuma Airport as they tried to leave the island.

Four days later, Netflix released “Fyre.” It was, in part, produced by Jerry Media, which managed Fyre Festival’s social media presence and can be said to be partly to blame for the hype that surrounded the festival. “Fyre” featured extensive interviews with the Jerry Media team. It also interviewed many Bahamians who helped McFarland with the festival, along with local businesses that were severely affected by the failed event.

However, given the competitive nature between the two streaming services, the documentaries end up coming across as far more similar than different. Both documentaries feature interviews and perspectives from many of the key players of this fiasco, like Seth Crossno, who sued McFarland, and Calvin Wells, who played a large part in exposing the lies surrounding the festival. They also both made sure to highlight McFarland’s previous business ventures, the Instagram marketing, the questionable funding of the festival, and the new scam McFarland concocted after he was arrested.

There are alarming components to each documentary, though: Hulu paid McFarland for his interview, and Jerry Media helped produce the Netflix one. Typically, these are two things that are unusual when making documentaries, perhaps casting a bias on each of the productions.

But both are special in their own ways; Netflix does a great job of telling the story of the local Bahamians affected by the festival, while Hulu shines when it comes to explaining the overall appeal of the festival and the pull it had on millennials. It was particularly powerful that Netflix was able to track down many of the Bahamians who lived on the island and who were involved with the festival. A highlight of these interviews was caterer Maryann Rolle, who owns a restaurant on the island and helped cater the festival. She lost over $140,000 and was never paid by McFarland for her and her staff’s work, forcing her to dip into her own savings. It was powerful to see her point of view, watching footage of her working while hearing her heartbreaking story. It is easy to forget just how many people who lived on the island were actually affected by what many dub as a festival for rich millennials.

“Fyre” also had another interesting character—event promoter Andy King—who was sent by McFarland to potentially perform oral sex in order to get a huge shipment of Evian water released from customs. His narrative gave the documentary a lighter twist, providing bursts of humor throughout the piece. Netflix focused on many of the different narratives that went into making Fyre Festival happen, while in comparison, Hulu’s “Fyre Fraud,” despite containing a lot of information and going through a lot of facts, felt less organized and lacked character. It felt a little bit controlled by McFarland, as he took up much of the time on screen throughout the documentary.

If you are as obsessed with pop culture as I am, or are just looking for a way to procrastinate your homework, both documentaries are well worth the watch. They are equally as thrilling, shocking, and intriguing, serving the truth every step of the way. But, just remember: It wasn’t Ja Rule’s fault.