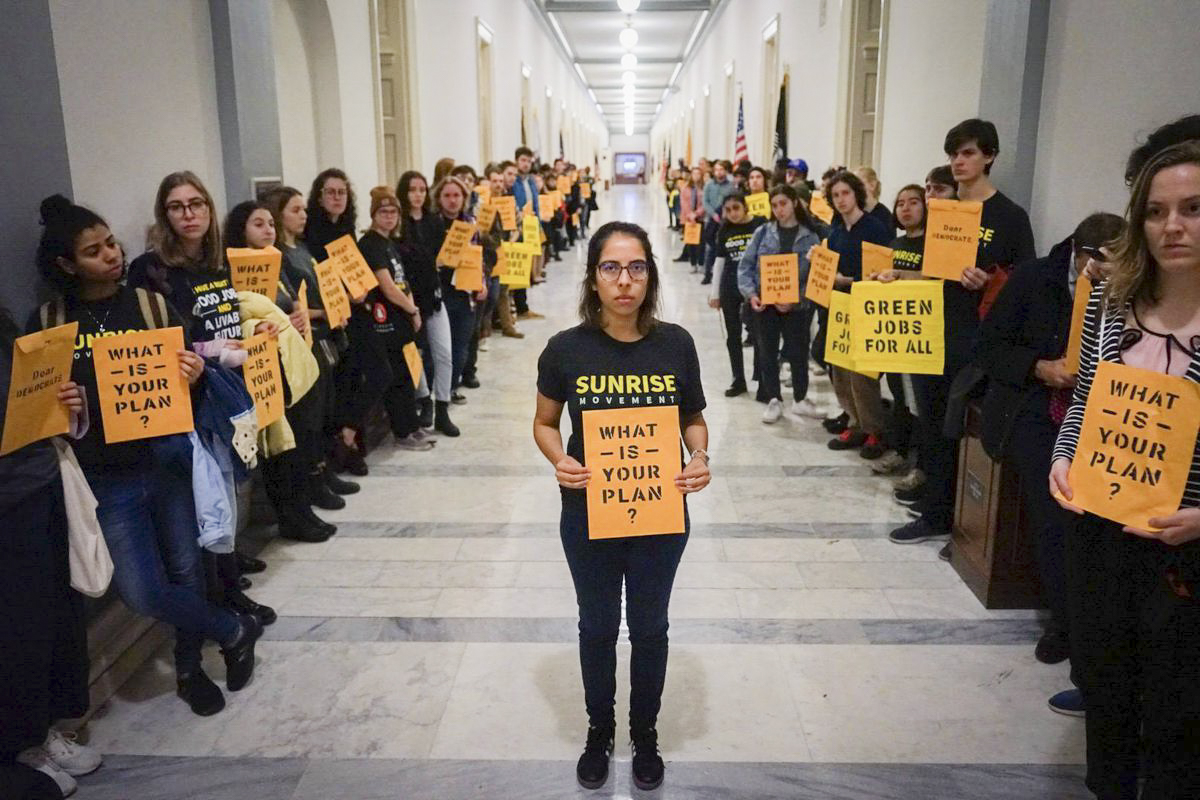 After winning control of the House of Representatives in the midterm elections, Democrats will now have the numbers to cement the issue of climate change on the congressional agenda. Recognizing this opportunity to advance young peoples’ vision of a more sustainable future, Sunrise is a national movement striving to make climate change an urgent priority in American politics. Sunrise was founded by University alumnus Evan Weber ’13, and a number of University students have joined since its formation.

“Fighting climate change requires massive government action over an extended period of time” Jackie Duckett ’20, a member of Sunrise, wrote in an email to The Argus. “Sunrise aims to elect leaders who stand up for the health and wellbeing of all people and that means unseating politicians who take money from fossil fuel CEOs.”

Sunrise’s demonstration in D.C. came less than a week after the Democrats regained control of the House. Pelosi has been nominated for Speaker and is likely to win, yet she has not escaped criticisms over her apparent lack of action in drafting plans to combat climate change.

“Each person that participated in the action wrote their own personal letter to Nancy Pelosi that included why they were participating in the action and what they wanted to see change in Congress,” Duckett said. “These letters were carried in manila envelopes that read on one side ‘Dear Democrats,’ and flipped over ‘What is your plan?’”

The urgent appeal to Democrat political leaders follows a report released by the United Nations’ Intergovernmental Panel on Climate Change (IPCC) in October which warned that the destructive effects of climate change could be irreversible in as few as 12 years. The report further illuminated the harsh reality of how natural disasters like the deadly California wildfires are sinking poor communities further into poverty.

Recently elected Congresswoman Alexandria Ocasio-Cortez has been an instrumental figure for the Sunrise Movement and has publicly advocated for those communities most affected by climate change. Ocasio-Cortez participated in the sit-in at Pelosi’s office where she joined young people in garnering support for the resolution of The Green New Deal—a proposal aimed at establishing a special congressional committee on climate change and charting a path to a 100 percent renewable energy economy.

“The Green New Deal we are proposing will be similar in scale to the mobilization efforts seen in World War II or the Marshall Plan,” Ocasio-Cortez told HuffPost. “We must again invest in the development, manufacturing, deployment, and distribution of energy, but this time green energy.”

Ocasio-Cortez’s decision to join the protesters and challenge Pelosi reflects the urgency and tenacity that have characterized the efforts of environmental advocacy movements like Sunrise. 51 young activists were arrested by Capitol Hill Police during the occupying of Pelosi’s office. While most of them were released soon after their arrests, the use of such force to quell this kind of peaceful demonstration speaks to a broader attitude in Washington towards political dissent.

“A lot of the people who tend to show up have the most to lose and the people who have the most privilege do not show up, and I think that is the biggest problem I see at this time,” Emma Rose Ritter ’19, another student who participated in the demonstration, said in an interview with The Argus. “I personally view it as my responsibility to put myself on the line as much as possible because I know other people most affected by the effects of climate change often do not have that chance. These demonstrators wanted to also stand up for people that don’t have the opportunity to make that risk.”

While some might question how effective the action was because Pelosi did not make a formal appearance, Duckett and Ritter both expressed that occupying that space was still an immense success, especially given the tremendous amount of media coverage. The New York Times, CNN, The Washington Post, and dozens of other outlets covered the action and promoted the demands of the activists for addressing climate change and pushing for Ocasio-Cortez’s Green New Deal.

The momentum of the Sunrise Movement has inspired a generation of young environmental activists. Having witnessed the passion of so many young people to pressure government officials, Wesleyan students are hoping to cultivate that same energy on campus by opening a chapter of Sunrise here at the University.

“There are a lot of people involved in environmental activism on campus continually doing incredible things, but often efforts do not have the same overall large focus for making a huge impact globally versus making an impact on Wesleyan’s campus,” Ritter said. “I hope that by bringing Sunrise back to Wes, we can broaden the scope of climate change activism!”

Given the magnitude of the fight against climate change, we are often left wondering: where is the best place to instigate activism? The Sunrise Movement’s response to this question is refreshing. It reverses the conventional top-down strategy to policy in favor of a much more grounded and community-centered grassroots approach.

“I know this is cliché, but there’s real power in standing for something so much bigger than yourself,” Duckett said. “In a way, it’s almost like sharing a faith, a group of people who share this strong belief and want to take action together.”