Men’s and Women’s Hockey Both Above .500 in Early Season Action 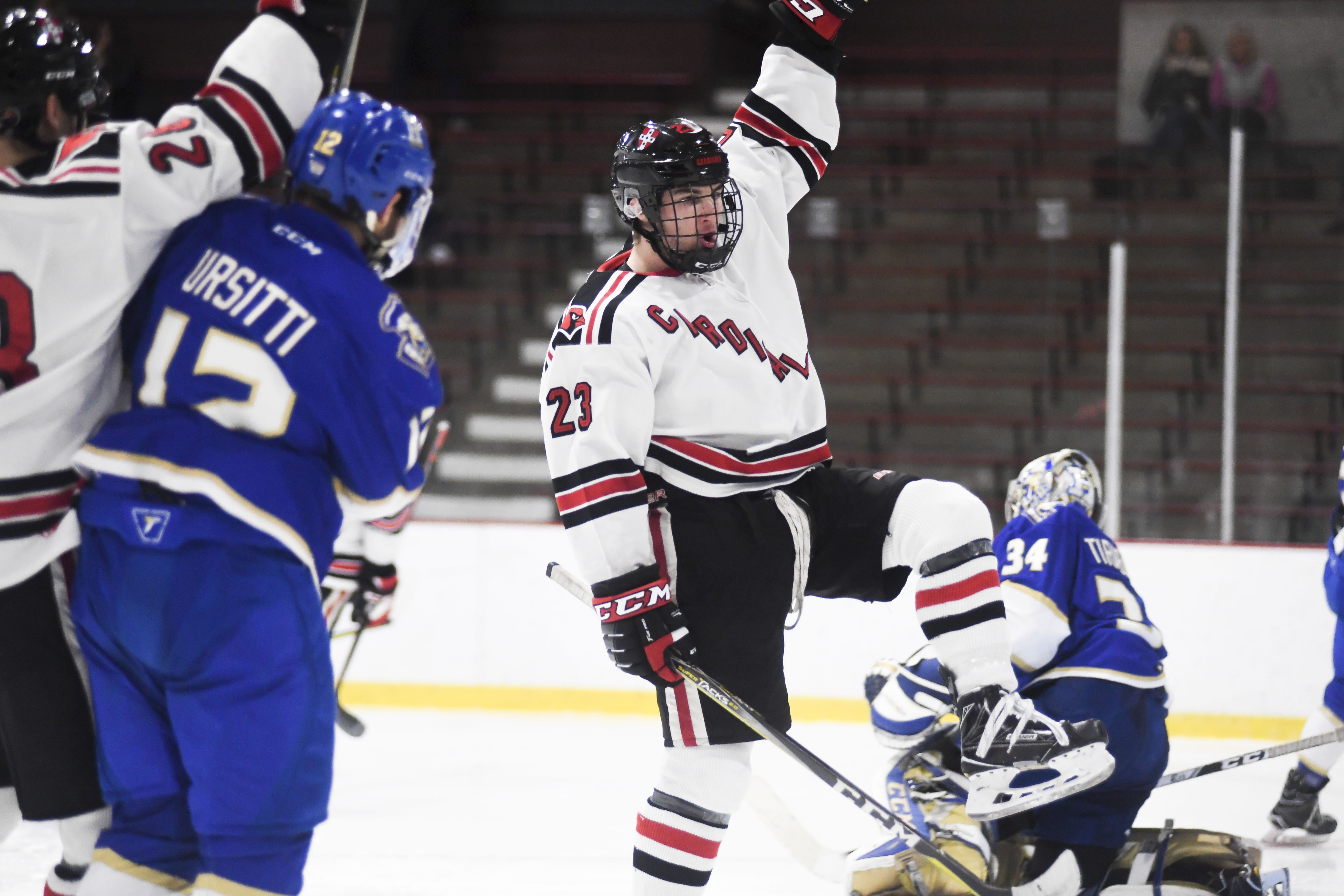 The men’s hockey team is off to a 3-2-1 start with a 3-0-1 conference record after wins over Hamilton and a tie against Amherst this past weekend. The Cards opened up their home conference schedule by tying Amherst 1-1 and beating Hamilton 5-2.

In the game against Amherst, Sean Ross ’19 scored the lone goal for the Cards in the third period on the power play with assists from Chad Malinowski ’19 and Walker Harris ’20. Tim Sestak ’20 made 34 saves in the win for the Cards.

The Red and Black then beat Hamilton 5-2 to cap off the two-game weekend. In the game, Hamilton got on the board first, but the Cards scored four straight goals to take a commanding 4-1 lead early in the third. Hamilton got one back to get it to 4-2 before Wesleyan put it away with an empty-net goal late in the game. Sestak made 31 saves in the victory for the Cards. Wesleyan went 1-3 on the power play in the win and had 30 shots on goal.

Malinowski, the team captain, has been pleased with the team’s performance so far this season.

“I think the team has been performing very well,” Malinowski said. “We have worked hard in the lead up to the season to be able to hit the ground running. We’ve been playing great hockey thus far and have been finding ways to win games.”

Malinowski attributes the success to the team putting in the effort and working hard.

“Our team motto is ‘we only need everyone,’ so there hasn’t necessarily been one key to victory, per se,” Malinowski said. “Everyone has been buying into their roles and doing everything they can to help the team win games. That begins each and every day at practice with guys pushing each other to get better.”

Next up, the Cards take on Stonehill College at 5:10 p.m. on the road on Saturday before the holiday break.

Malinowski says that the key to continuing to win is to continue to work hard.

“The key is to avoid complacency,” he said. “We have had a great start, but that is all it is right now, a good start. As a team, we have higher aspirations than leading the league in December. We want to be the last team at the end of the season and a team that is peaking at the right time and playing our best hockey when it matters most. Getting there isn’t easy, and it isn’t a one day or one week journey. We need to continue to work hard each and every day to improve our game.”

Hopefully, the Cards can continue this success as they get further into their conference schedule. 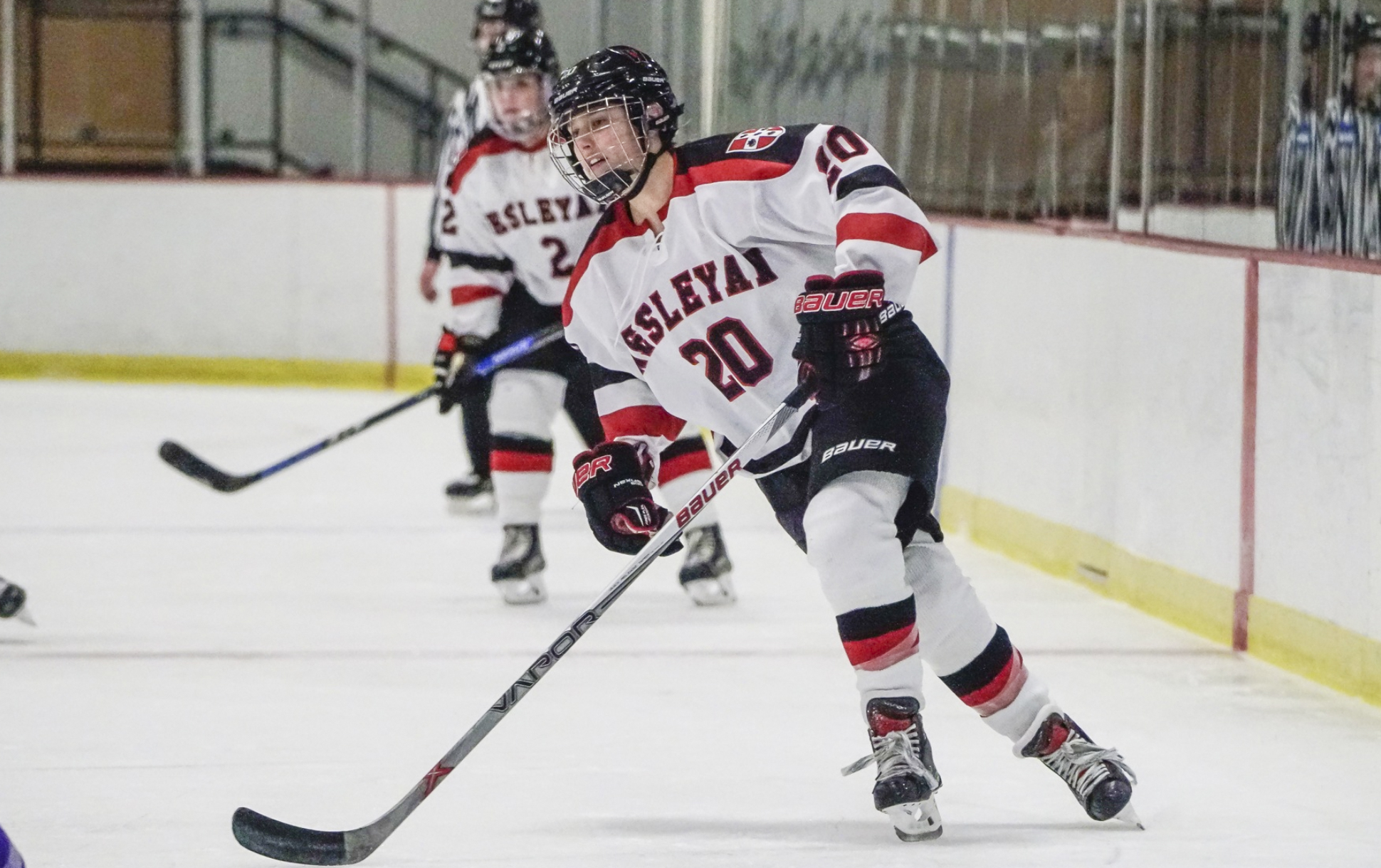 The women’s hockey team has likewise gotten off to a 3-2 start after going 1-1 against Williams this weekend. Before the games this weekend, the Cards had won 2 of their first three games vs. Salve Regina University and UMass Boston while losing to Manhattanville College.

The Cards then kicked off their conference slate by beating Williams 3-0 and then losing to them 4-0. In the win, Ally Detre ’22, Allie Damren ’20 and Maggie Curran ’21 scored for the team, and Allegra Grant ’20 made 38 saves in the win. Wesleyan scored three goals on seven shots against Williams. However, they could not repeat the same effort and scoring again the next day, falling 4-0 to them.

So far this season though, positive contributions have come from multiple players, as Detre and Sydnée Goyer ’21 are tied for the team lead in goals with only two. Grant has also been solid in goal, only giving up two goals in the three games that she has started, the highlight being a shutout in the game against Williams, where she was bombarded with 38 shots.

After five total games, Sarah Takahashi ’21 is leading the team in assists with three, while Damren leads the whole squad in points with four.

Next up, they look to continue the success as they open up their home slate versus Endicott College tonight (Tuesday, Dec. 4) at 7 p.m.