Wesleyan’s Newest Performance of “Cabaret” Wows in Its Silences 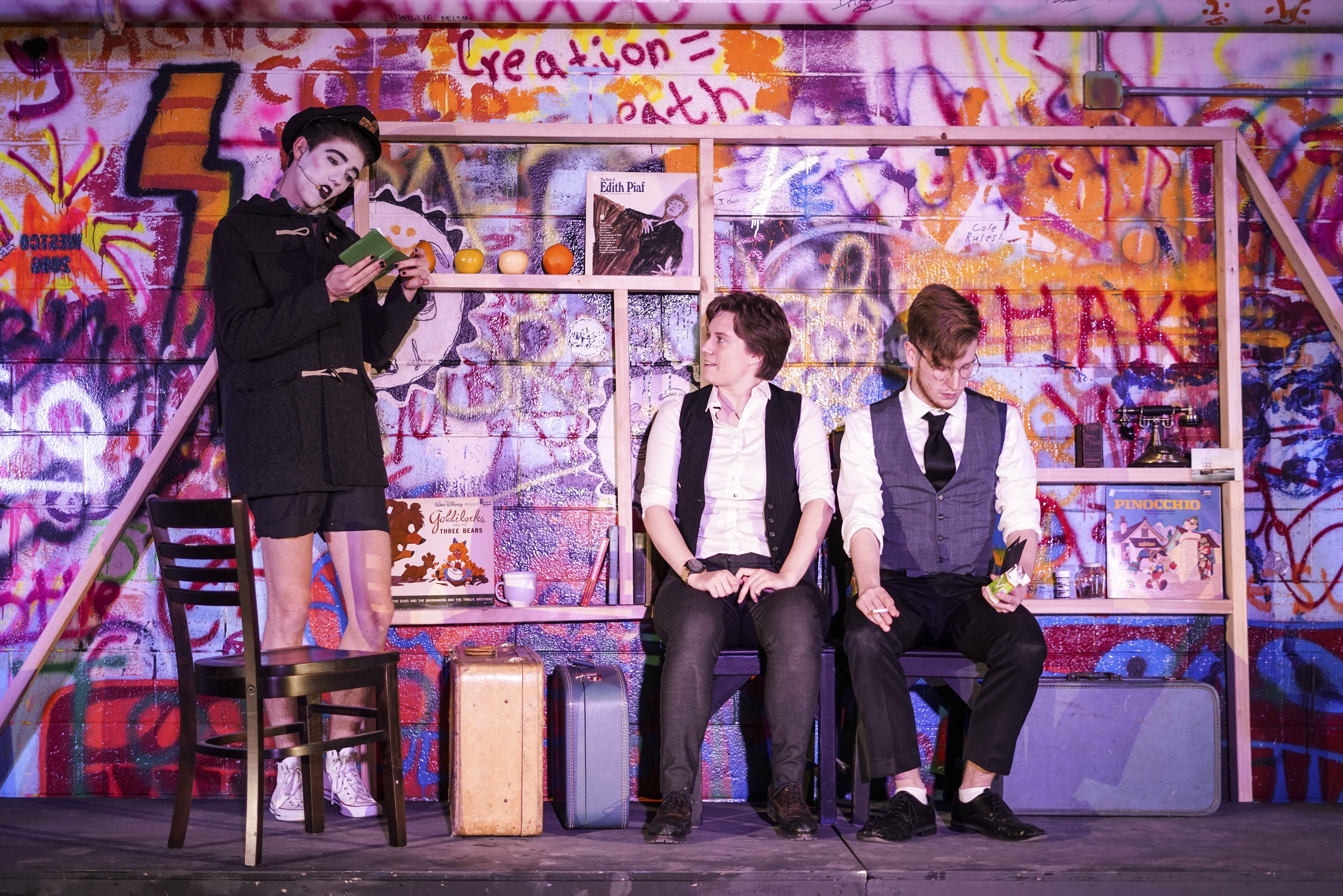 Editor’s Note: The writer of this piece is close friends with the director and several crew members of this Second Stage show, which may have affected his opinion of the production.

The difficulty of producing “Cabaret,” in some sense, is carving out a space for it. With most shows, there is one hegemonic production, one original cast that everyone is in some way imitating afterwards. With “Cabaret,” there are two. First, the original production, theatrical and polished. At the helm of it, Joel Grey portrays an M.C. more marionette than human. Then there is the modern portrayal, with Alan Cumming’s raunchy interpretation setting the tone for the whole piece.

It is a simple matter to copy one or the other—and I would have been impressed to see that done properly—but this Wednesday, I was happy to have my expectations not met, but exceeded. I saw a production with elements of both. Produced by Second Stage, this version of “Cabaret” combines elements of the older and newer versions of the iconic musical while simultaneously transcending both of them. It occupies an in-between space and found in that space its own identity and purpose.

This space was, first, physical. Set Designer Binxin Wang ’20 and the directorial staff created a set that, however small and simple, perfectly framed the narrative. A modest platform allowed for central action—at times, it was a train, at times a stage. Bring in a typewriter and make-shift bed, and suddenly we were invited into Cliff Bradshaw’s apartment. Still, the fun of this set was not at its center, but in its large, sprawling expanse. To the right and the left, tables and chairs made up the Kit Kat Club, where actors, scene in and scene out, would sit.  For show stopping performances, featuring spectacular numbers from the Emcee and Fraulein Sally Bowles, the frame would focus to the center. Otherwise, it crept out in all directions. If you looked away from the main characters in the second half–out from the blatant, disturbing portrayals of anti-Semitism–you might notice the other actors: small, slumped, frightened.  The set was too big, you couldn’t see everything at once. You eventually realized, like the characters themselves, how nearsighted you were. 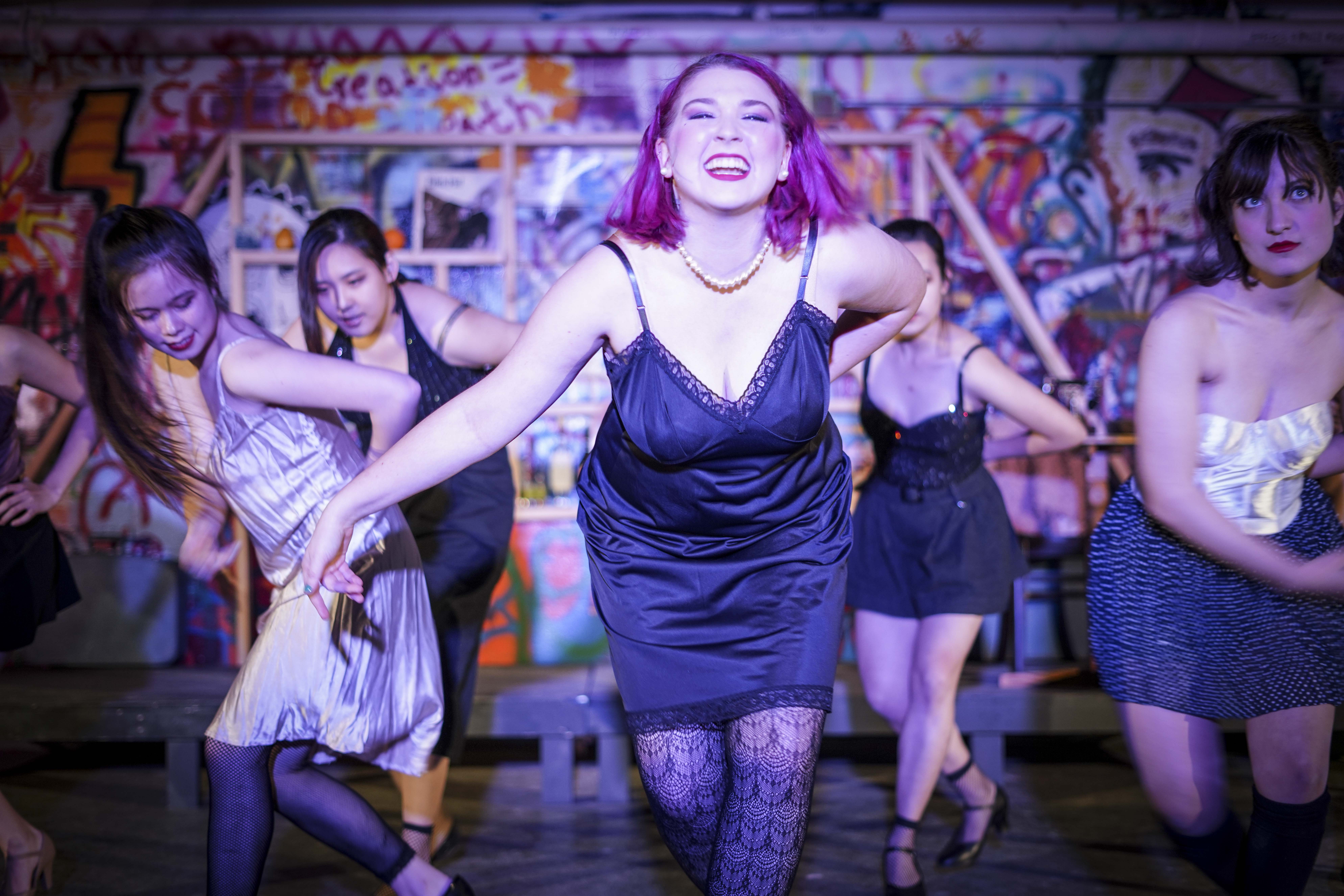 This space, too, was narrative. Pryor Krugman ’20’s Emcee drew upon both its predecessors but found its own poignancy.  He had a disturbing, doll-like manner at times, as Grey, but would have made Cumming proud with his naughty behavior.  Most importantly, there was something more.  He was not a mere mixing but added his own perspective and substance, seen as much in his costuming as in his acting. Brilliantly, Costume Designer Emma Graham ’19 dressed him not only in Grey’s mime facepaint and Cumming’s risque suspenders, but also added elements never before seen—an undershirt and converse shoes. The play was by no means modernized, but the Emcee’s appearance and manner were at times contemporary. Just as he wore modern clothing, so too he slipped out of a theatrical, German demeanor periodically and was distinctly modern. In these moments, we looked to the WestCo graffiti behind the set—the background that looked so old before was recognizably current.

Though the Emcee himself contributes to so much of the show’s atmosphere, its success was only possible through excellent acting across the board. Ben Russman’s ’21’s Herr Schultz was lovably earnest—and all the more heartbreaking, as a consequence. Beside him, Hannah Gearan ’22’s Fraulein Schneider was dynamic and eminently human, even in the most inhumane conditions.  It is difficult to say anything good about Phie Jacobs ’22’s Ernst, which is perhaps the highest praise you can receive playing a Nazi. Throughout, also, smaller characters as Adam Hickey ’22’s Bobby and Sydnie Rathe ’22’s Fraulein Kost provided excellent comedic support.  However, Rathe’s frightening rendition of “Tomorrow Belongs to Me” would eventually put an end to the mirth. 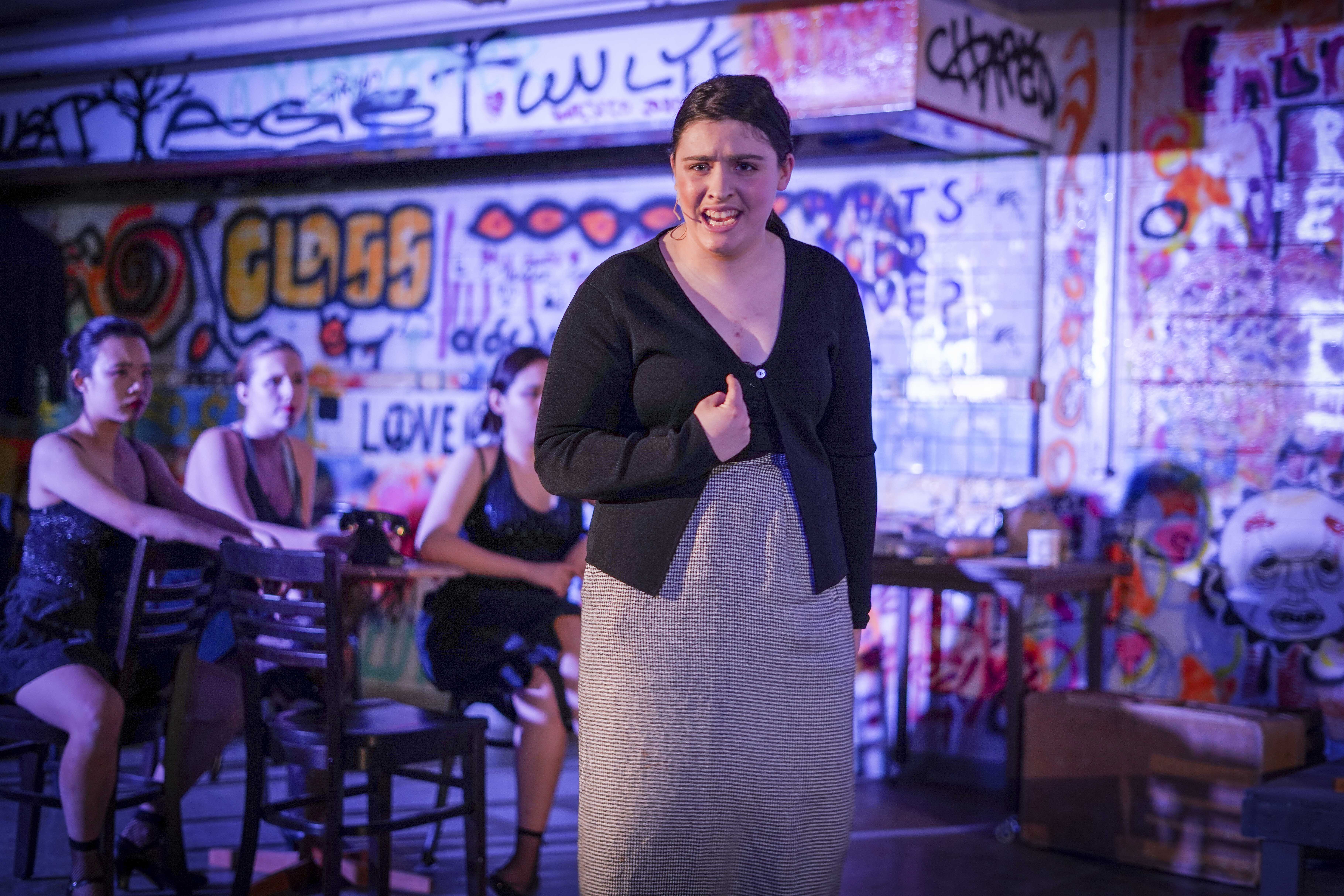 Keith Jones ’22 did an excellent job with the difficult character of Cliff Bradshaw. He was straightforward and gullible without being bland. Over the course of the show, he showed a definite change in demeanor and fortitude. This execution is what allowed for an overtheatric, overbearing, overeager love interest–enter Fraulein Sally Bowles, one vast, substantial smile. Sally, portrayed by Avery Rose Pedell ’21, was too much in all the right ways, evident from her first song and driven home during “Mein Herr” (during which, I must add, the Cabaret girls not only took on, but nailed Bob Fosse’s infamously difficult choreography). She immediately established herself as a force of nature and only added to her resume in the second act. Amid a show stopping, bombastic rendition of “Come to the Cabaret”—atop a smile as bright as ever—her eyes gleamed with fear and remorse.

Shows always take up space—a venue, a rehearsal process, a length of time—but with the efforts of this incredible cast, a capable band behind them, and a technical staff who obviously did their due diligence, it is evident how theater can do so much more. It can  allow us to exist, for a short time, in a different latitude than our everyday existence, to fill more than literal space. Director Kira Stern ’19 promised at the beginning of the performance that the show would work through complex issues and difficulties, and this production has not made a liar of her. I have seen many renditions of “Cabaret,” several professional, and even the previous installment at the University. Comparing them, I may cite strengths and weaknesses to each, but I found myself walking away from this performance without criticism. It came to me eventually—there are always little things, and I am sure they will continue to improve even more as they go on—but that is beside the point. I spent a good time after the final curtain quite frankly unable to speak. What, then, can I say now?

As I sort through my experience in this space, I come back to its setting and how the cabaret members were another audience that I, myself, watched. I think of all that I noticed that they had missed. I wonder what they saw that I couldn’t. If you were to watch me as I watched them, you might think that the greatest marker of my approval was my applause. You would be correct, only in that you were mistaken. This show’s success was measured neither by applause, nor the standing ovation at the end. Rather, it was the pauses, the silence, the seconds that passed between performance and cheers; the time wondering if clapping was appropriate and the confusion and anxiety even as I did. This space, beyond being narrative or physical, was emotional: a place of trauma, of witnessing, of mourning. As I walked out, I was thankful for that space, amid all its horrors—for only through traversing it could I return to my own world again, now as a place of healing.