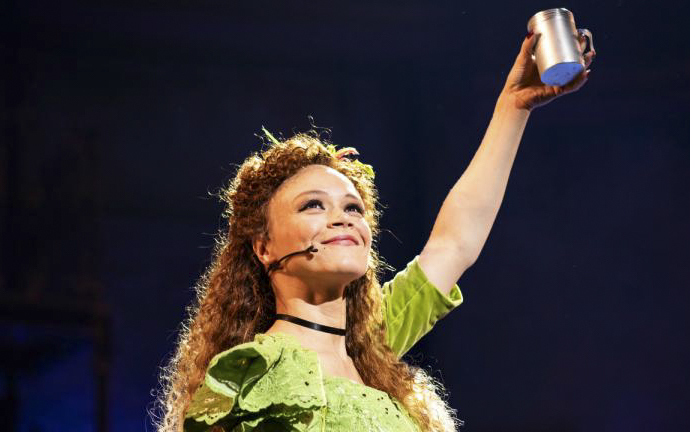 Hermes blows a train whistle, and a station car comes up the road from Hell.

These are ancient tales buried in the depths of our cultural consciousness brought to life on the modern stage.

We meet Persephone (Amber Gray), goddess of spring, who must return to the underworld for the winter to be with her husband, Hades (Patrick Page). Yet, Hades’ Hell is more a sweat factory than a mythical underworld. An ensemble of workers keeps the beat with their machinery, slaving over the foundry that Hades has created. He’s a businessman with power and resources and is unafraid to use them for his personal gain.

The mythical Romeo and Juliet provide an innocent counter to the warring gods. Eurydice (Eva Noblezada) is a poor girl looking for shelter who finds love instead. Orpheus (Reeve Carney), her lover, is the skinny white boy with a guitar who’s convinced his songs can bring back spring. But winters are cold, and Eurydice quickly realizes Orpheus’ tunes can’t provide the security she needs.

Instead, she meets Hades behind closed doors, accepting an offer to come work in his underworld in exchange for shelter.

While Eurydice attempts to adjust to the harsh working conditions of Hadestown, Orpheus finishes his song and realizes his lover is gone. He resolves to get her back, but there’s only one railroad to Hell, and he doesn’t have a ticket.

With the aid of Hermes, Orpheus makes his way to Hell and wins Eurydice back by playing his magical song. Hades decides to let her free on one condition: Orpheus must lead them back up to Earth, and cannot look back to see if Eurydice is behind him. If he does, she will return to the underworld.

On the turntables of the National Theater stage, an audience watches with bated breath as Orpheus walks in the dark, Eurydice behind him, her cries falling on deaf ears. Suddenly, Orpheus looks back, and Eurydice’s fate is sealed. She descends into Hell below, lost forever.

This is an ancient tale with an ending that is jarring, but not surprising. But just because we know the ending doesn’t mean we shouldn’t watch or tell the story again.

Anaïs Mitchell, the creative mind behind the book, lyrics, and music, retells these myths with a new life. We’re not watching an antiquated, distant tale, but one that is instead relevant to our modern world.

“Hadestown” began its development over 10 years earlier as a song cycle in 2006. After a cast album in 2010, Mitchell met Rachel Chavkin, director of the recent Broadway hit “Natasha, Pierre & The Great Comet of 1812.” The pair worked to transform the thread of songs into a robust musical ready for the stage.

The show is set to take Broadway stage in April, and currently runs on the National Theater stage in London.

While the character tropes are familiar to a Western audience—the young lovers who will crawl to the ends of the Earth for one another, people in need who will sacrifice anything for shelter, lifelong partners who overcome differences to renew their love—there are elements that are more American than anywhere else. It’s not just the accents.

Hades is a power-hungry, capitalist, white man who’s trying to build a wall around his underworld. His song, “Why We Build The Wall,” was a later addition to the show, written during the time of President Trump’s election.

“Why do we build the wall? My children, my children,” Hades asks in rhythmic song. “How does the wall keep us free/Who do we call the enemy?”

“The enemy is poverty,” responds the cast in unison, a stark contrast from the rest of the show’s elaborate harmonies. “And the wall keeps out the enemy/And we build the wall to keep us free.”

Gasps scattered throughout the audience. The horror!

English audience members could see the embodiment of a familiar, powerful man, and hear the chants of words they’ve no doubt heard in foreign media. Yet as I sat there with fellow Wesleyan students, we weren’t shocked. Our closeness to the political situation was instead discomforting; a myth from ages ago was akin to our cultural experience. It stung.

This is what good theater does. It makes us feel things, even if we’re uncomfortable or pained. Mitchell’s work isn’t supposed to reassure us that everyone is good and that fairy-tale endings exist. Instead, it teaches us lessons about relationships, love, security, and even our modern world. “Hadestown” doesn’t tell a happy tale; it tells an important old one with new meaning.