“Call Me Max”: A Follow-Up With Congressman-Elect Max Rose ‘08 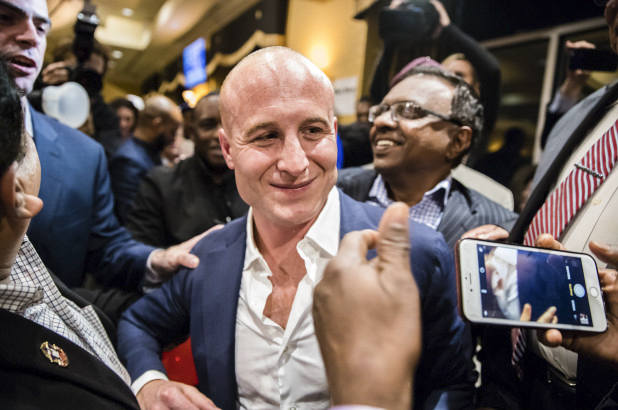 Within the first 10 seconds of my interview with Max Rose ’08, he asked me to call him by his first name. It’s a rejection of formality that, combined with his fast-paced, Brooklyn-infused way of talking, has helped Max connect with people since the start of his campaign—and something that presumably helped lead him to victory in New York City’s last remaining Republican district, the 11th. He’s nothing if not honest—something that came across quickly when asked about his Congressional orientation experience, the weeks-long process where newly elected representatives learn the legislative ropes and get acclimated to the Capitol.

“It’s a dog-and-pony show,” Rose said, chuckling. “Campaigns are very fast, me-centered, and then suddenly it transitions. You’re one of over 400 members, you have so much to learn, there’s a new environment, coalitions matter so much. You look around and think it’s high school again: does he like me? Does she like me?”

This process has been more transparent than ever, with multiple freshman representatives posting Instagram stories and Facebook Live videos of their orientation. Despite his initial reaction, Rose made it clear that he recognizes the gravity of what he’s a part of.

“It’s a fascinating experience, but I think it’s important to take a step back and say, wow, this is something only 12,000 or so people have done in the history of this country,” he continued. “It’s humbling, it’s a blessing, and it’s one that we really got to take advantage of. Two years goes by quickly.”

Especially with two and a half branches of government still under Republican control, it’s easy to assume those two quick years will go by with little legislative accomplishment from Democrats. Even though he recognizes the difficulty facing him, Rose refuses to accept the idea of simply being a check and balance on the Trump administration.

“If anyone tells you they can complete their entire legislative agenda in two years or solve all of the world’s problems in two years, they’re either lying, naive, or incompetent,” he said. “But I believe we can push the ball forward.”

It’s his belief in that movement forward, combined with his time serving in the U.S. Army, that led Rose to his initial decision to launch his campaign.

“One of the reasons I ran for office is because my life was saved by the armor underneath my vehicle when my vehicle hit an improvised explosive device,” he said. “Even more important than that, the lives of the people I loved very dearly were saved. I bring up that story here because that armor was placed underneath my vehicle as a consequence of a very quiet bipartisanship. It saved my life. I ran for office because of my deep optimism in what this country is capable of when we do truly act on the interest of those we’re entrusted with serving.”

One of the first parts of that service, for Rose and all the newly-elected Democrats, is a vote for who will lead them—the Speaker of the House. Having seen a number of interviews—on MSNBC, on CNN, on CBS—I was fairly familiar with the Congressman-elect’s stance on Congresswoman Nancy Pelosi’s speakership (firmly against). But I decided to bring it up, tentatively, asking why a position like Speaker of the House should matter to average people. That did not stop Max from sharing his full opinion.

“I get asked this question a lot, ‘Max, what are you gonna do?’” he began. “And call me old-fashioned, but I’m gonna do exactly what I said I was gonna do during my campaign. And the fact that it would even be in the realm of possibility that, on my first vote, I would break a promise speaks to the failure of politics in this country. It speaks to the fact that we have now come to accept that elected officials will be subsumed by transactional politics, subsumed by their own ego, their own personal pursuits, their own personal futures, the pressure of their colleagues, potentially, and they would just quickly fold on a promise that was one of the critical fixtures of their campaign. That to me is laughable, and more than being laughable, actually alarming.”

The Democratic party held their initial vote on the speakership a few hours after our interview. Thirty-two Democrats, voting by secret ballot, opposed Pelosi’s nomination. The New York Times has since confirmed that Rose was among them.

One oft-cited reason for opposing Pelosi’s nomination is that, at 78, she is no longer representative of a Democratic party that is increasingly younger and more diverse. I followed up by asking Rose what kind of role young people will play in the future of the party. When he asked me to clarify what I meant by young people, I responded by asking about college students and recent graduates—that is, people younger than him.

“I’m the youngest male Congressman,” he responded. “Thanks for calling me old.”

He answered the question nonetheless.

“What I hear all too often is, ‘What’s your strategy here, what are you doing to target the youth?’” Rose began. “What I found is that if you run an honest and effective campaign that speaks to not just the problems of the present but the problems we will undoubtedly face down the road, like global warming for instance, young people will find you. You don’t have to target them, they’ll target you. What I think is absolutely essential for college-aged people to realize is that they can have an inordinate effect on the future of this country. I was the oldest staff member on my campaign, my campaign manager included. We executed the biggest upset in America. It’s a very, very small way to change this country, and that’s because people decided to get in the mix.”

These young people involved in his campaign helped propel Rose from a huge disadvantage to, as he said, one of the biggest campaign upsets of 2018. For him, that victory was built on trust.

“I think what we did that was successful is that we never sought to win this election with one shiny commercial at the end of the cycle, or one glossy piece of direct mail,” he explained. “What we did was engage in a years-long effort to earn people’s trust. I never ask for someone’s vote, I ask for their trust. You can’t ask for someone’s trust quickly. You have to go door by door, community by community. We knocked on over 550,000 doors with an army of people. Slowly but surely, I not only earned their trust, but earned their support.”

And even though he’s won the race, he claims that the strategies he employed during the campaign don’t stop come January.

“I always knew that I would enjoy being a policymaker, and having the opportunity to serve people in elected office,” Rose said. “I didn’t realize how much down to my core I would fall in love with the process. Every day, using your ears and your mouth in equal proportion. My district is filled with cops and firemen and teachers and first responders and sanitation workers and vets, people who put it out on the line every day and can’t afford to fail. They really speak to our true potential as our country. To have had the opportunity to spend more than a year speaking to people and learning about their fears and desires and hopes and dreams is one of, if not the most, rewarding experiences of my life. Reelection never stops and it never should.”

Even knowing all of this, though, Congressman-elect Rose still maintains a down-to-earth personality, the kind that makes him resist the title of Congressman. He’s still just Max, a guy who wants to cut through the bullshit—the dog-and-pony show—and serve the people who elected him. It’s a desire that was honed here at the University.

“I think Wes definitely teaches you how to think and how to approach unconventional problems and address them with unconventional solutions,” he explained. “People say, ‘you joined the military after Wes? What are you doing?’ But I’m of the belief that Wes instills in people the desire to serve. That’s definitely how I hope to continue to live my life. I wasn’t some Congressman-in-waiting in college. I was an idiot, just like all of you.”