“Boy Erased” Offers an Exploration of Religion and Sexuality, at a Distance 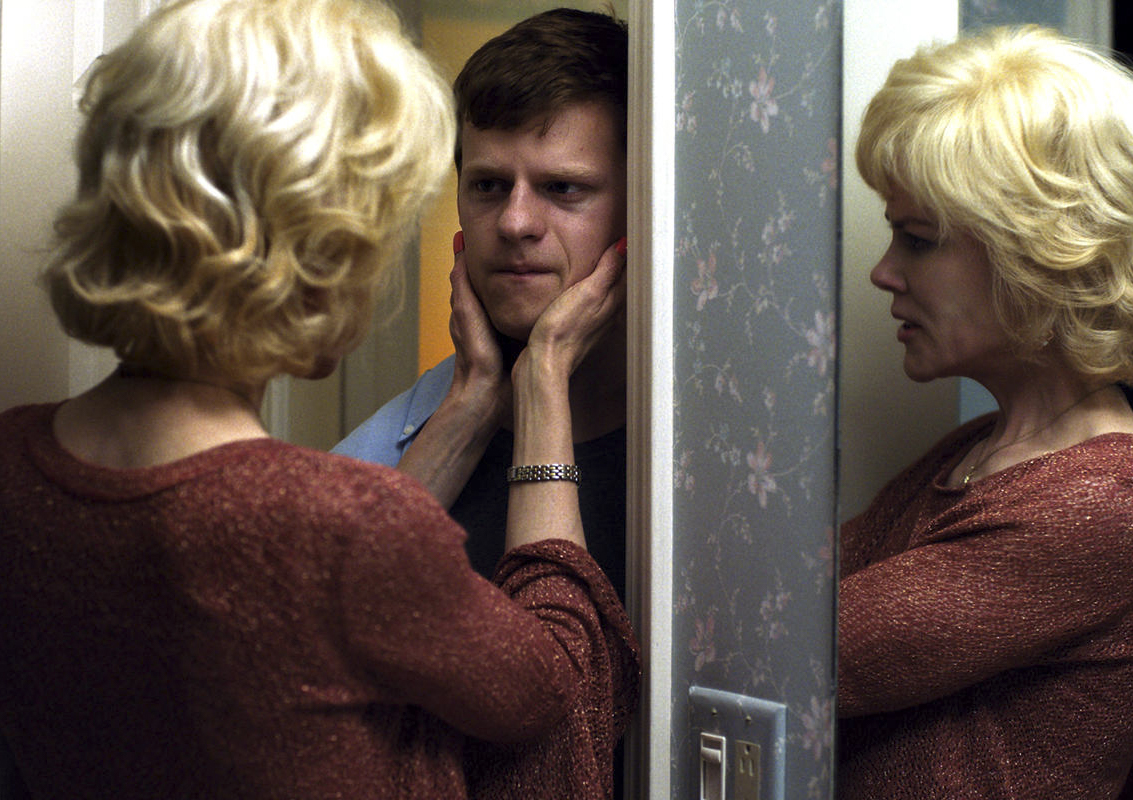 The first line of dialogue in “Boy Erased” is a simple voiceover, during which the protagonist seems to be speaking directly to the audience. The teenager Jared Eamons (the superb Lucas Hedges) has packed up his bags and is being driven by his mother to “Love in Action,” a gay conversion program meant to “heal” his sexuality. In a moment that blurs the lines between past and present, memory and truth, and fiction and reality, Hedges speaks in voiceover asking whether or not it was worth it to have gone to the conversion program at all.

“Sometimes I wish it had never happened to me…” he questions, before stating something akin to: sometimes I’m okay that it did.

Those lines, wavering with uncertainty about retelling a traumatic story before ultimately giving into acceptance, seem to offer a triple confession for the audience. Yes, Jared is looking back on his horrific memories and questioning if what he witnessed hurt him more than it propelled him forward. However, this voice also seems to belong to Garrard Conley, whose 2016 memoir the movie is based upon, speaking on behalf of his own life, as well as actor Joel Edgerton, the film’s screenwriter and director, who is struggling to reconcile putting the audience through Conley’s painful journey. This multiplicity of voices—one real, one fictional, one serving as a medium to others—offer a fascinating look into the ways in which we process and handle trauma. However these competing voices eventually muddle “Boy Erased” and make the audience doubt (just like Jared, Garrard, and Edgerton) whether or not they wish the experience had happened to them at all.

“Boy Erased” wants to educate its audience about the world of gay conversion therapy as much as it wants to condemn it. Conley attended “Love in Action” in Arkansas during the early 2000s, when being sexually assaulted at college outed him to his parents. Jared’s father (Russell Crowe), a car salesman and soon-to-be Baptist minister, immediately enrolled him in the program and his mother, Nancy Eamons (Nicole Kidman), dutifully drove him to and from the campsite every day.

The film spends much of its beginning initiating us into the repressive world of “Love in Action.” Jared is stripped of all personal belongings and is told to maintain complete confidentiality about what happens at the camp. While to the audience it’s clear that this program is a near-prison meant to capitalize off of Christian evangelical fears, for Jared the program offers an exhilarating chance at redemption. He smiles at the prospect of personal transformation, and soon dedicates himself to the program even as its methods become psychologically frustrating and physically threatening.

The audience is always sure of which side it’s supposed to be on, a narrative problem the movie never fully resolves. While the representation of “Love in Action,” particularly Edgerton’s performance as the program’s director Mr. Sykes, never devolves into pure antagonism or caricature; the program’s repressive ideological beliefs are never conveyed with much complexity. When Jared struggles to follow the authorities that are repressing him, a fellow enrollee Gary (portrayed by openly gay singer Troye Sivan) states, “Are you starting to see it for what it really is?” Like us, Gary is in on conversion’s cruel trap. Thus, Jared’s slow realization of this danger is more frustrating than satisfying: it’s hard to believe anyone would believe the lies being spouted, no matter how desperate they were. The religious world presented is uniformly repelling, not entrancing.

It didn’t necessarily have to be this way. Another recent film adaptation of a memoir, “Beautiful Boy,” depicted a teenager’s drug addiction with overwhelmingly beautiful cinematography, thus making a drug overdose as visually intoxicating for the audience as the protagonist. There are no such wonders here: In an effort to show conversion as the fraud that it is, Edgerton has shot the majority of the film in bleak grays, making the characters’ joyful faith in the conversion system seem consistently misguided. The film’s stiffness at conveying the salvational pull of gay conversion may be indicative of the institution’s failures. But it’s just as likely a limitation of empathy on Edgerton’s part: Is it possible to make moral shame enticing? Is it possible to render people who irreparably damage the lives of others as understandable, flawed humans? Though Edgerton attempts both, the way conversion therapy is presented is too broad and cold to envelop the audience in the religious salvation the characters are hoping to feel.

While the conversion program may not work cinematically, the film succeeds when it leaves those repressive walls through memory-driven flashbacks, and explores the events leading up to Jared’s two weeks within the program. While Edgerton struggles to convey the complexity of Mr. Sykes, he seems much more comfortable depicting the complicated way in which Jared’s parents alternately help and hurt their son. As Jared’s father, Russell Crowe displays immense care and frightened paternalism within the same sentence. At one point in the film Jared is asked to release his anger about his father and he is unable to; despite putting him in conversion camp, Jared understands that his father is trying to help his son the only way he knows how to. The tragedy of “Boy Erased” isn’t just of Jared’s repressed sexuality, it’s of a family whose belief in religious “change” threatens to destroy them.

This fact is conveyed most effectively through Nicole Kidman’s portrayal of Jared’s mother. Kidman’s defining acting skill is her ability to present women withholding their emotions; it’s what imbued her potentially melodramatic role in the recent television series “Big Little Lies” with a gravitas and inner resilience. Here, she brings that same skill to a mother who is silently complicit in her son’s destruction—she understands what is happening, but doesn’t understand how to end it. Even within a small amount of screen time, Kidman can etch a lifetime of subdued questions and the small ways in which women defer their authority to men. Her character’s journey, from wishful ignorance, to abject horror, to pleading forgiveness, is clearly a model onto which the film hopes its audience will follow.

Which calls into mind a bigger question: who is this movie for? Its condemnation of gay conversion, as well as its intense focus on Jared’s parents, imply that the film’s largest audience are parents of LGBTQ teenagers. For them, this film serves as both a cautionary tale and a celebratory pat-on-the-back for parents like Jared’s mother who can learn to love unconditionally. It’s also a film working within a long-established (and Oscar-award winning) genre of a straight community grappling with LGBTQ pain, from “Boys Don’t Cry” to “The Laramie Project” to “Dallas Buyers Club.”

The intention behind serving this parental demographic is well-meaning: If this film encourages at least one parent to understand their LGBTQ child better, the world will be better for it. Unfortunately, this approach leaves its actual LGBTQ audience without much to latch onto. “Boy Erased” never feels like it taps into the experience of being gay in any surprising way, nor does it attempt to wrestle with gayness outside the fight against either internalized or societal homophobia. The near-documentary objectivity of the proceedings doesn’t capture the unnerving experience of realizing you’re gay, much less the destructive process of internalized shame. While a film like Barry Jenkins’s “Moonlight” used lyrical close-ups to get intimately close to its LGBTQ protagonist, in “Boy Erased” we’re never truly let into the tortured mind of Jared. His reaction at being sexually assaulted is filmed with disappointing conventionality, leaning a little too close to the “stock image” of depression to be believable. One might blame this on Edgerton’s straightness, but to do that would be reductive; Jenkins, a straight man, was still able to capture a uniquely queer subjectivity. Edgerton seems too invested in the Jared’s parents, an outside force looking in (and a surrogate for himself in the narrative), rather than the young gay man at the center of the story.

That’s not to say that the film doesn’t deliver some emotionally resonant moments regarding the LGBTQ identity. There are moments that flicker in and out of the narrative like a guiding light: Jared staring a little too long at a running buddy he finds attractive; Gary seamlessly code-switching into a straight voice as a survival tool; and Jared staring at a commercial with a male model on it before screaming out in pain. These moments allow the audience to not just stare at gayness as an outsider, but to feel the experience of being gay in its raw complexity. But nothing quite matches a tender moment when Jared and fellow college student Xavier (Théodore Pellerin) simply lie down next to each other on a bed. Here any trace of the outside world falls away and we are left with a moment of profound intimacy between two young men. Not only is it a respite from the continual pain LGBTQ people face in the movie, it allows us to feel, like Jared, the relief of seeing sexuality not weaponized or discredited, but instead liberated.

If only the entire film retained that sense of personal revelation. The voiceover from the beginning of the movie doesn’t return outside of that first opening line—and unfortunately, the presence of Jared’s subjectivity struggles to come alive in the rest of the movie. The few liberating scenes in “Boy Erased” make the film worth seeing. But if you’re looking for a film not just about gay conversion but about what it means to be gay, you’re going to struggle to hear that voice outside of Edgerton’s. Jared’s voice, and thus Garrard Conley’s, demands to be heard, and not only through the lens of straight characters and straight filmmakers. I guess I’ll just have to pick up the memoir. And because the film encourages forgiveness, I’ll forgive Edgerton for missing the opportunity to speak directly to LGBTQ teens, not just those who know them.