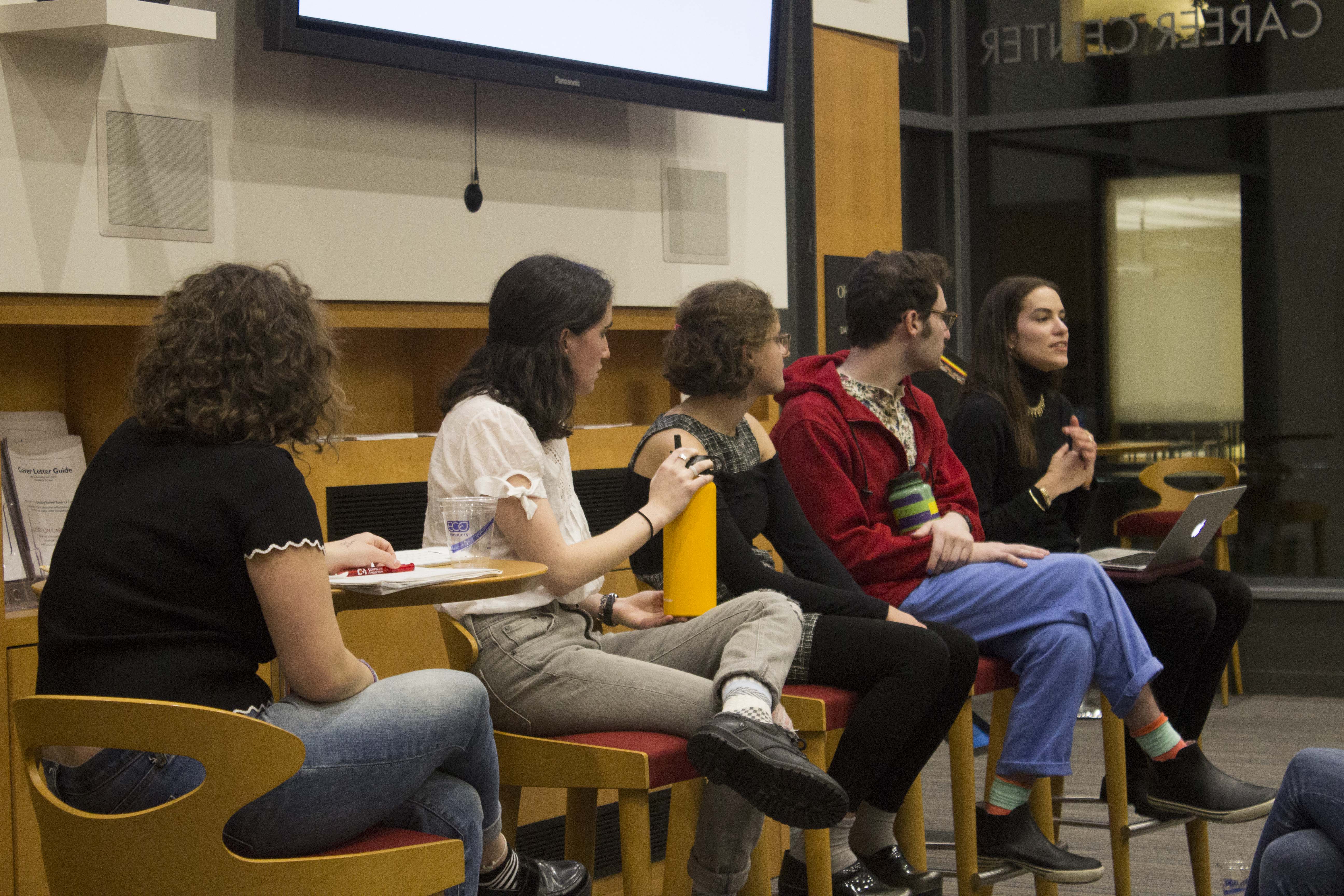 During the panel, four Wesleyan students spoke about their different experiences working with refugees over their summer breaks, both in the United States and overseas. The panel was moderated by Caroline Kravitz ’19, President of WRP. She began the event by discussing some of the work that the WRP does to support refugees, including providing tutoring and undertaking legal research.

The first student to speak about their experience was Libby Salzman-Fiske ’19. During the summer, Salzman-Fiske worked as a Mentoring Intern for GirlForward, a Chicago nonprofit that supports high school-aged girls who have been displaced or who have refugee status. The girls that GirlForward works with come from a wide range of countries, including Burma, Syria, and Afghanistan.

While Salzman-Fiske was hired as a Mentoring Intern, she also helped with GirlForward’s summer camp. The summer camp consisted of an eight-week program with weekly themes including women’s rights and human rights. The camp is designed to provide a community support network the girls, and also allow them to develop skills, such as improving their English.

The second student to describe their experience was Maya Karp ’19, who interned for Pangea Legal Services in San Francisco, CA this summer. Pangea is an immigration nonprofit that specializes in deportation defense. While Pangea provides legal representation for both detained and non-detained immigrants, Karp explained that it also provides community education and legal empowerment through different actions and demonstration.

“It’s considered a pretty radical immigration law firm,” Karp said. “There have been articles that have cited it as a radical group even though it’s just people who want to do some good.”

During her internship, Karp worked on a wide variety of tasks. These included translating primary documents, helping to lead Know Your Rights campaigns in local communities, and most importantly, conducting research to produce annotated tables of contents (the supporting documents which are used for asylum claims).

While both Karp and Salzman-Fiske worked with refugees in the United States, Sam Pollak ’21 volunteered in Greece through a program called Samos Volunteers. Samos is a Greek Island roughly two miles from the coast of Turkey that has become a hotspot for refugees in recent years. Samos Volunteers does not work in the island’s refugee camp but rather is a separate organization that operates outside of it. The organization provides a number of services to the refugees on the island, including educational and recreational activities. During his time on the island, Pollack taught sex-ed classes to children and also helped to start a laundry service for the camp. 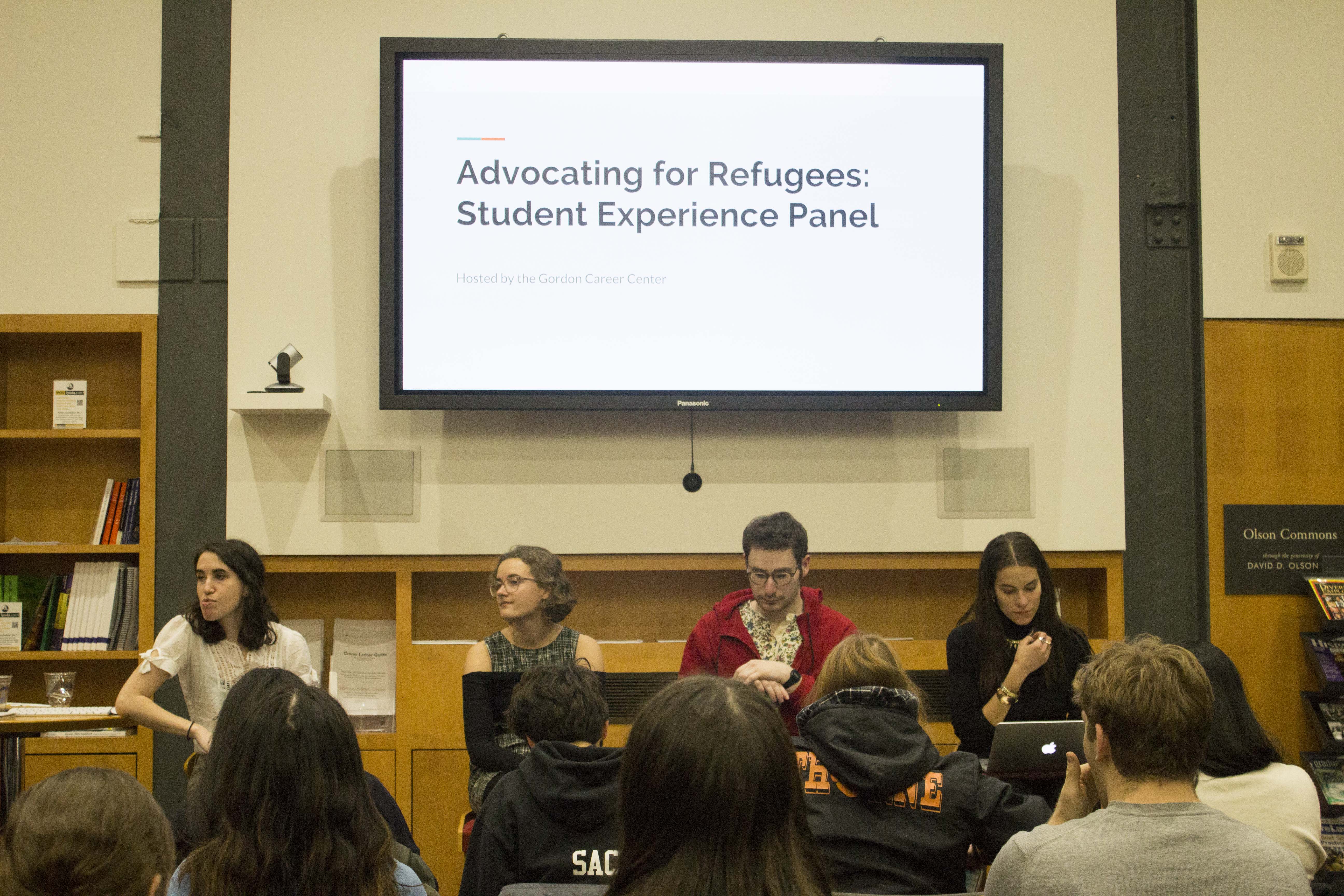 Lizzie Edwards ’21 also worked outside the U.S., serving as an intern for Reclaim Childhood in Amman, Jordan. Reclaim Childhood seeks to empower refugee women and girls through sports and activities such as leadership programs and summer camps. As an intern, Edwards helped out with the summer camp in the morning and worked on the organization’s research and grant-writing team in the afternoon. In addition, she visited other organizations in Jordan, including the International Refugee Assistance Project (IRAP), where Edwards had previously volunteered through WRP.

Originally, Edwards was surprised by the fact that refugees in Jordan are treated very differently based on their nationality. She pointed out that Syrian refugees are often given greater benefits by the Jordanian government and that NGOs sometimes limit services to specific nationalities.

“What I really liked about reclaim childhood is that refugees of many, many different nationalities are able to access the services that Reclaim Childhood provides,” Edwards said.

While all four students talked about their unique experiences working with refugees, one common experience that the students shared during the panel was just how emotional and challenging their work could be.

Pollack also touched on the harsh conditions that refugees in the Samos camp faced. He described problems such as severe overcrowding (the camp was built for 700 people but now houses approximately 3000), rat infestations, and extreme temperatures in both the summer and winter.

Kravitz, the event’s moderator, was pleased with how the event turned out.

“Their diverse range of experiences as advocates for refugees and immigrants gave the audience insight into the many different ways one can approach advocacy work,” Kravitz told the Argus.

More events are planned for Wesleyan’s International Education Week, including the African Student Association’s African Indaba (Conference) and the association’s cultural show, ‘Ariya.’ Both of these will be held on Saturday, Nov. 17, and more details can be found on the Fries Center for Global Studies’ website.