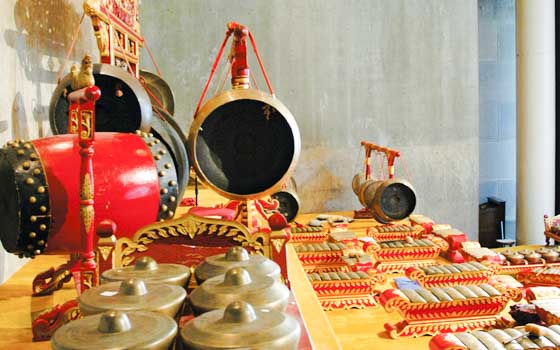 The array in Crowell spreads across the entirety of the stage, a platter of gold and red. Musicians and their instruments cover every inch of the floor. They sit cross-legged, mallets in hand, and they all follow the beat of the drum. But they do not follow any rhythm or tempo. Because in Indonesian music, you follow the whim of the drummer, and the hit of the gong. At the back of the stage, an older woman sits under an awning, next to gongs stretching up to six feet in diameter. When she hits, the reverberations flow languidly all the way to the back of the theater.

This is gamelan, the Indonesian ensemble taught by Winslow-Kaplan Professor of Music Sumarsam. This past weekend, gamelan hosted the Indonesian Royal Court of Yogyakarta, including its dancers and musicians. University students got to perform alongside royal musicians in traditional dress, in front of the Sri Sultan Hamengkubuwono X of Yogyakarta himself. Professor Sumarsam has been preparing for this visit for nearly two years, but he has been teaching gamelan at Wesleyan for over four decades.

The showcase featured a full gamelan percussion ensemble of drums (kendang), gongs, slenthems, bonangs, and more. In front of the musicians, various royal dancers performed traditional Islamic storylines in ornate masks and costumes. The dances were more narrative-based, resembling theater as much as ceremonial dance. A symposium on Saturday explained the costumes and puppetry in greater detail for the University community. Before the performance commenced, the mayor of Middletown Dan Drew presented Sri Sultan with a key to the city. Connecticut’s Indonesian community, which consists of about 40 to 50 families, also received invitations to the showcase.

Professor Sumarsam stressed the visual as well as aural components of gamelan, which lend itself to such an immersive performance.

“I think [viewers are] able to see the magnificence of the gamelan…with the carving and the painting and the big gongs, small gongs, and strings,” Sumarsam said. “The first time people see the gamelan, they’re always amazed by the visual presentation of it.”

The gamelan course at the University is divided into two sections, Beginners and Advanced. The musicians at Friday night’s performance all take the Advanced class, and practice four hours per week. The students, many of whom only began playing last semester, are part of a larger ensemble of graduate students and Indonesian court members, some of whom have decades of experience in the craft.

“It’s incredibly intimidating to work alongside the royal court members,” gamelan musician Kela Sachs ’19 said. “In a way, it actually helped me that I didn’t have a lot of music theory experience before joining gamelan last spring, because I had less of a Western foundation to unlearn.”

Sumarsam noted that one of the most difficult concepts for students to grasp in Beginners’ Gamelan is the cyclical structure of Indonesian music. Instead of following a linear metric, music circumscribes around the pace of the drum and the cycle of the gong hits, more like a clock.

“It’s almost like a calendar system,” Sumarsam explained. “You have this cycle that progresses, and within the cycle, certain elements repeat consistently.”

Unlike Western music, Indonesian notation also uses numbers instead of letters and notes. Gamelan itself is a percussion-based ensemble, but the performance on Friday featured several singers and even a small horn section.

“It’s such a complex style of music. It can be difficult for a Western ear to immediately appreciate it, because there’s so much dissonance and the concept of timing is so different,” Sachs said. “If you notice in the performance, oftentimes the two singers aren’t ‘in time,’ or even singing the same thing.”

Because Javanese music follows a cyclical structure, pieces can be expanded or compressed based on exponents of two, to fit whatever time frame or speed is desired.

“I remember sometime in my beginner’s section, we did a 32-count piece which lasted over an hour,” Sachs said. “I didn’t even notice how long it was. I was so lost in the music, because there are so many different elements to focus on at one time. It’s truly an immersive experience, and there’s so much your ear notices. It can be overwhelming at first, but once you get used to it, you appreciate something new every time.”

Sumarsam is sure to acknowledge the way cultural idiosyncrasies can shape the way we perceive music, especially Westerners who are accustomed to a different set of standards.

“Music doesn’t have a universal meaning because it’s always being constructed in any event, but [viewers] will get some type of aesthetic enjoyment in the music they’ll be hearing and the dancing they see,” he said.

The gamelan program in particular was given to the University in 1984 by the court of Yogyakarta. Sumarsam hopes that this showcase in particular would give University students and Middletown residents alike a window into Indonesian culture, but he acknowledges the difficulty of presenting an entire culture to a viewer in just under two hours of performance.

“So this is the complexity of it, because the gamelan…has a long history of the era of Hinduist Java to the era of Islamized Java that is about centuries long in term of the history of the gamelan and the puppetry,” Sumarsam said. “It’s too much to learn in one weekend, but hopefully people get the nature and the complexity of the culture of Indonesia and Java in particular.”

Sachs, for one, has been mesmerized by the art form and culture since day one, as well as the teaching style.

“Sumarsam is the gamelan guy,” Sachs emphasized. “He’s known around the country. I love him so much. If you notice when you meet him, he’s always smiling. That’s the kind of energy you get when you practice with him.”