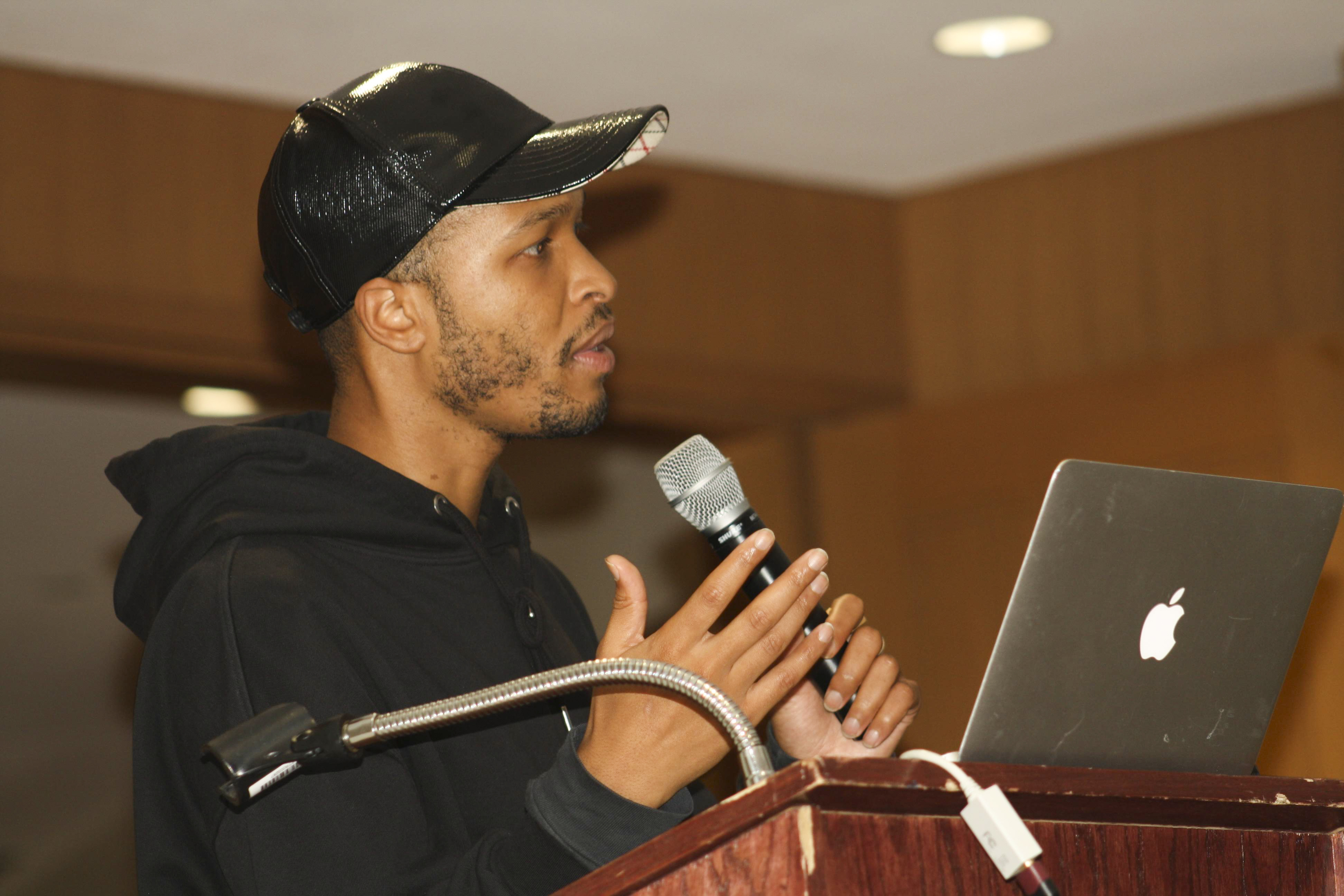 Antwaun Sargent, an art critic whose work has been featured in The New York Times, The New Yorker, and Vice, among other publications, spoke to students this past Friday in the Daniel Family Commons. The event was presented by the University’s student of color publication, The Ankh, in collaboration with the Adelphic Educational Fund, the Center for African American Studies, the Department of Art & Art History, and the Student Resource center.

“The idea to organize this came from a desire to reclaim learning for the sake of learning,” Paul McLaren ’21, one of The Ankh’s staff members, told The Argus about the motivation behind the event. “Sometimes academia can feel very elitist and claustrophobic—it’s very into itself. Engaging with people like Sargent, who don’t have fancy PhDs, invites a new perspective of learning. Sargent engaged with us genuinely and colloquially, and I think everyone left the talk feeling refreshed and inspired.”

Sargent’s lecture was the first of a biannual series featuring academics and creatives of color, and part of an ongoing effort by The Ankh to foster dialogue among students of color.

“The Ankh’s mission is to serve as a platform for people of color on campus,” fellow staff member Kazumi Fish ’19 explained. “And over the past few years we have been trying to expand exactly what that could look like beyond our biannual publication. We’re trying to create more events and spaces where people can physically be together in conversation with each other, whether that be through the gallery that we hosted last semester in the Workshop, or through the extensive Q&A session that Antwaun stayed for at the end of his talk. It is so important to bring creatives of color to campus who are excited to talk about not only their work itself, but also how they got there and how they navigate industries where most people do not look like them.”

Sargent’s talk interspersed stories about his own career trajectory and his personal relationship to art with commentary about the work of specific artists and the importance of writing about artists of color.

Sargent was initially motivated to start writing about art in 2012, soon after he graduated from college. While visiting the Brooklyn Museum with a friend, Sargent stumbled upon a Mickalene Thomas painting titled “Le Déjeuner sur l’herbe: Les Trois Femme Noires.” An enormous mural depicting three Black women sitting on a picnic blanket, Thomas’s work echoes the composition the Manet painting “Le Déjeuner sur l’herbe,” which depicts two clothed men and a nude woman eating lunch in the woods. Staring boldly at the viewer and surrounded by a collage of vibrant colors and patterns, Thomas’ mural both references and challenges the European artistic canon to which painters like Manet belong.

“I didn’t know who Mickalene Thomas was,” Sargent said of his response to the painting. “I didn’t know anything about her work; I had not seen Black women depicted this way in an art museum. It really immediately made me think of the women in my life—my mother, my mother, my sister, my grandmother—and of sisterhood as an act or a behavior…. So I go on my normal websites—New York Times, Vogue, The New Yorker—and nothing was written at the time about this work.”

Inspired to fill this hole by writing about Thomas’ work himself, Sargent sent out pitches to multiple publications, only to receive no response from any of them. Nonetheless, the experience motivated him to continue to seek out and write about Black artists ignored by the mainstream artistic establishment.

In between anecdotes about his own life, including his time as a kindergarten teacher straight out of college or his attempts to create a magazine called The Philosopher in high school, Sargent discussed the work of several other Black artists, revealing the wide variety of themes and perspectives these artists bring to the table.

One such artist was David Hammons, whose piece “In the Hood” Sargent displayed for viewers. “In the Hood” is simple but deceptively powerful, consisting only of the hood of a sweatshirt. This hood has been torn from the rest of the garment and nailed to the wall, transforming from an innocuous piece of clothing to an ominous evocation of decapitation and violence. Despite being well over a decade old, the piece feels no less relevant now, in the age of Black Lives Matter.

“This work was actually made in 1993, but it has an ability to evoke the present,” Sargent said. “‘In the Hood’ can mean a lot of different things. It could mean a location, it could mean a body, it could mean death, because that garment holds all of those histories…. And thinking about and seeing this work and engaging with the artist, I came to the conclusion that the role of the artist is fundamentally important in our lives. They are showing our culture back to us.”

Another work Sargent discussed was photographer Awol Erizku’s “Girl with a Bamboo Earring.” Much like Thomas’s “Les Trois Femme Noires,” “Girl with a Bamboo Earring” draws inspiration from a famous European painting—in this case, “Girl with a Pearl Earring” by Vermeer—while simultaneously challenging the societal norms upheld by that painting. In Erizku’s photograph, an African-American woman is dressed like the subject of Vermeer’s original artwork but wears a large, heart-shaped bamboo hoop earring instead of a pearl.

“[Vermeer’s painting] is an image that exists in our culture, that we have to constantly negotiate with,” Sargent said, pointing to a slide displaying the two pieces of art side by side. “It’s an image that people see as a stand-in for beauty. But if you don’t look like that image, what does that say about you? Awol in recreating this image…tried to locate that same beauty, desire, self-possession in a different kind of body.”

Sargent maintains the same emphasis on searching for new and underrepresented perspectives even while writing about artists who are very much part of the mainstream establishment. This approach was exemplified in an article Sargent described writing for The New York Times on Andy Warhol, for which he interviewed exclusively female artists and artists of color about Warhol’s influence on their work.

“For so long, the only people you heard talk about Andy Warhol’s work were white male artists,” Sargent said, explaining his desire to seek out fresh points of view, even when writing about a subject who has been covered hundreds of times before. It’s an approach that more writers could stand to take.

“[I was] trying to make my case for the importance of Black artistic production, and the Black artist, and the people they represent,” Sargent said early during the lecture, describing his motivation for getting into writing.

By the end of the event, there was no question that his case had been made.