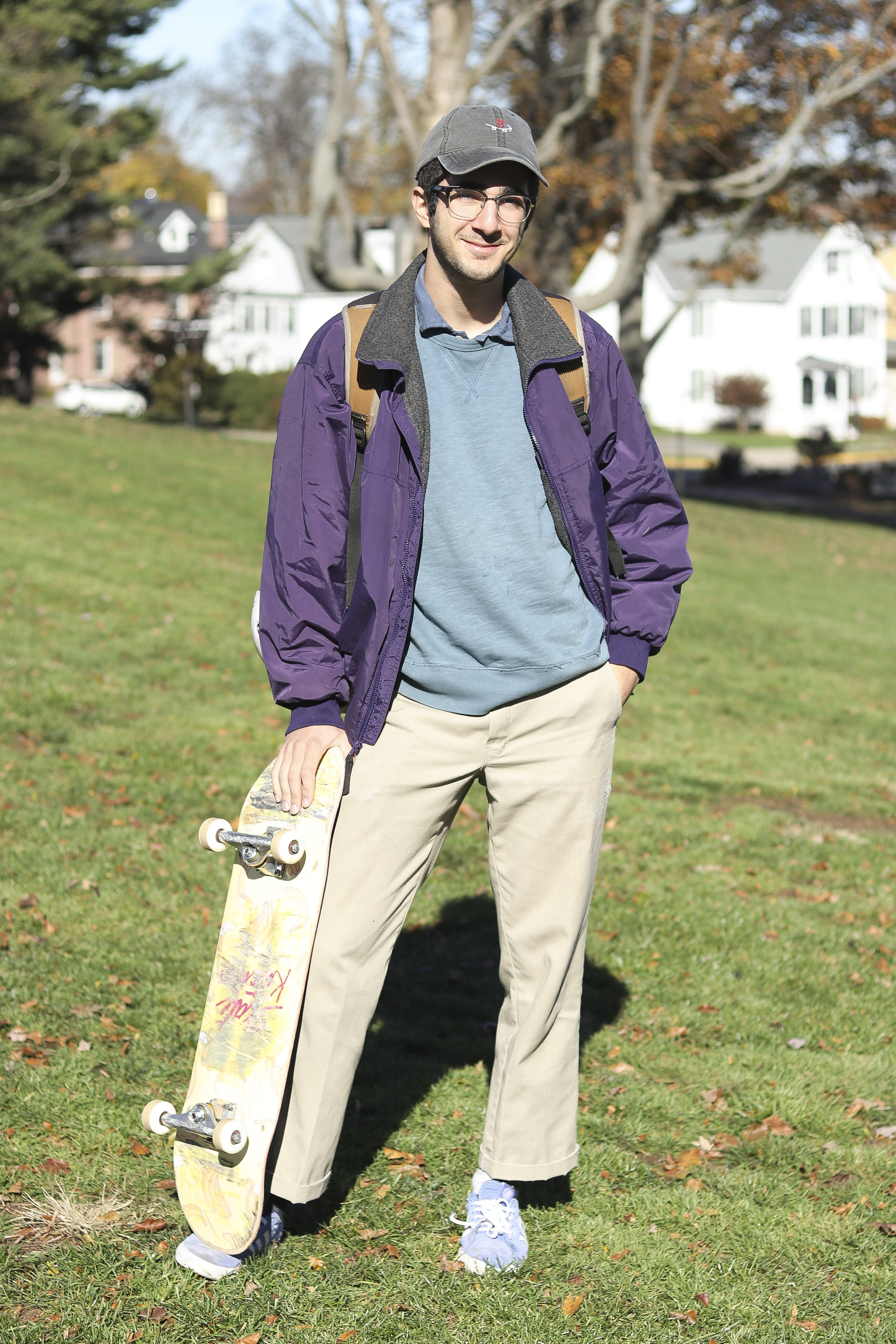 This week’s WesCeleb could be known as an “influencer.” At over 59,000 YouTube subscribers and 11,000 Instagram followers, this celeb knows his way around the web. His weekly vlogs and skateboarding videos have gone viral, and you’ve probably seen him and his board on campus, wearing his signature leaf cap. The Argus had a chat with George Poulos ’19 about skating, branding, and living your dreams.

The Argus: When did you catch the skating bug?

George Poulos: I started skating when I was eight. I had these two friends who skated, and I admired them a lot, so I just started skating with them. They had an after-school skate program in the middle school gym, so that was just where I went every day.

A: When did you start posting videos of yourself?

GP: I’ve been posting videos on this channel since 2007. I started filming myself in my basement with like pajamas and stuff. That’s all you do when you skate—just film yourself.  I started doing YouTube more seriously freshman year here. I was inspired by a couple people who were doing YouTube full-time as skateboarders. I decided to post my first video schedule every three days until I hit 10,000 subscribers and reevaluate my situation. I actually did it, and learned along the way. That was always the plan, to learn by doing.

A: How did things start blowing up?

GP: It was very slow, but I had a viral video, and I got like 7000 subscribers in two days, which got me to 10k. That was about freshman year or sophomore year, and once that video went viral then it started growing faster, and it’s been getting faster since then. It was called “Why Skaters Hate Scooters.” I was just filming my friends skating at the local skate park, before I started planning my videos. There were kids kind of getting in our way, and I happened to find a kid jumping down stairs on his scooter, and I set it as the thumbnail for the video. I should clarify that I don’t actually hate scooters. I refuse to get my skateboard wet, so I almost want to buy a scooter for myself for when it rains. [The video] has like three million views. It’s very weird.

A: How did fame change how you approached your videos?

GP: I just started doing skate videos on Friday and vlogs on Monday, so my Monday videos are kind of not as planned—just whatever stuff I do. Friday is some topic that’s really centered on skating that I think will do well on the YouTube algorithm, like “5 Easy Tricks” or shoe reviews, which are pretty popular.

A: Do you often look back to see how you’ve improved or even feel embarrassed by your early stuff? Or is it all positive?

GP: For me there’s no single moment, but suddenly I’ll look back and realize, “Wow, I’m a lot better.” Definitely since moving to school, the style of skating is different from where I grew up in New Jersey and New York. There are dream tricks of mine that I did slowly land. I look back at my videos where I was struggling, and the fact that I can do them now blows my mind. I really like having the memories there. That’s huge for me. Of course it’s embarrassing and cringeworthy because we all change, but it’s all good. It blows my mind that I’m a senior. It’s nice to look back at when I was a freshman. Although, going back to the videos in ’07…. I don’t want to look at those. They’re unlisted; you can’t find them.

GP: Yeah, I started plugging my Instagram basically when I started YouTube. It was kind of a natural progression. There was a pivotal moment when I tried to get the @georgepoulos username. I had to buy it from someone else, and once I got it that was when things picked up.

A: Recently, you had a giveaway on your Instagram for that leaf hat. Tell me about your new brand.

GP: I’m starting a brand called Arrow Skate Co., and this happens to be a collab with Canswer. They donate 10 percent of profits to cancer research. We just came up with a concept and hired our friends to design and put a brand together. I’m trying to make Arrow completely separate from my YouTube identity so it’s not just, like, YouTube merch. 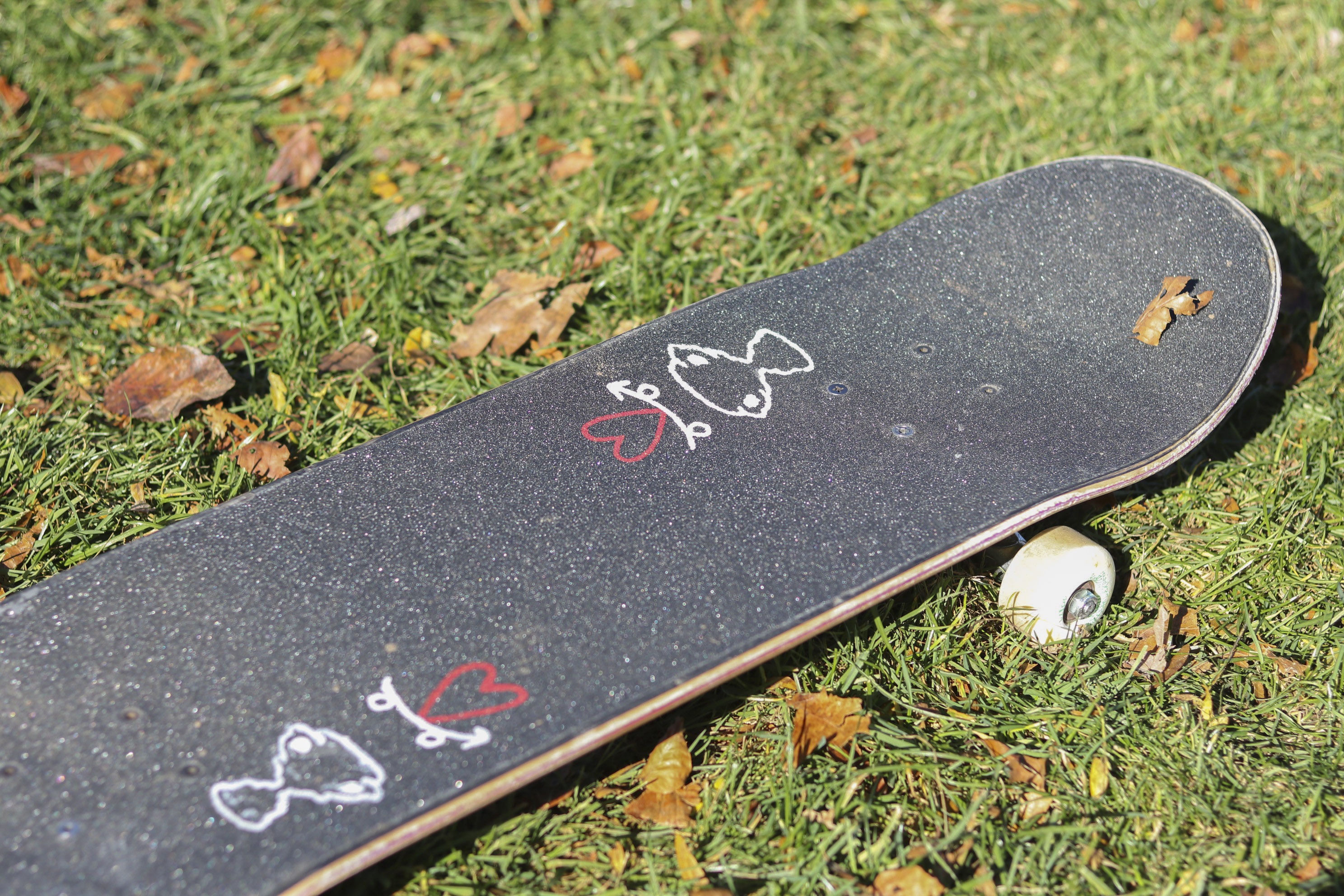 A: You posted on WesAdmits about starting an Instagram Influencer Club. How’s that going? Did you get any responses?

GP: Pretty recently, I met another YouTuber on campus, a sophomore named Tommy. He’s even bigger than me; he does video game stuff. Also a freshman named Iris who makes great videos. It made me realize there are other people on YouTube here. We got lunch a few times and have a group chat to connect and ask each other for help. It’s pretty cool. I don’t know if there’s like an official plan, but I think it’s a good start.

A: Do you ever burn out and get tired of skating?

GP: [laughs] I love skating. Now that I think about it, the reason that I decided to post a video every three days was because I was afraid I would lose touch with skating, and the videos would force me to keep practicing. Now, I have to remember to skate for myself instead of just doing it for the videos.

GP: It’s like, poppin’. It’s kind of similar to the YouTube thing; it’s just a GroupMe with like 35 people, and someone will hit it up if they want to skate. We have huge sessions. We go to all sorts of skate parks in the area: Middletown Skatepark, etc. I’ve made some of my best friends through it. When I came into Wes as a freshman, it took me a while to find a single other skater. Eventually, I found someone who added me to the group chat, and it’s grown from there. It changes every semester, and it’s called Weskate Fall 2018.

A: What are plans after graduation, skating and otherwise?

GP: I don’t have any concrete plans other than the fact that I want to do it full time. I don’t want to get a job. I definitely can do it full time, but it’s almost scary to say aloud. It’s not secure but it’s possible.

A: Do your parents approve of that plan? Not that it necessarily matters.

GP: Now they do. I think they’ve just realized how serious I am about it. They really care that I’m financially stable, and they always assumed I would apply to normal jobs. I think over time they see that I can do this, so they’re about it.

A: Do you have any skateboarding role models? Were you a Tony Hawk kid?

GP: I love Tony Hawk, I played the video games a lot as a kid. I think my role models tend to be the skate YouTubers because it’s so different to be a pro skater. You have to have a ridiculous skill set, and that’s completely unattainable in my eyes. I kind of look up to the people that aren’t that good but figured it out because they love it.

A: Got any messages for aspiring influencers? Or just, like, people in general.

GP: A lot of people assume they’re just going to get some kind of job. I thought I was going to get a software engineering job, but if you find that unrealistic passion, I think everyone has the potential to make it happen.