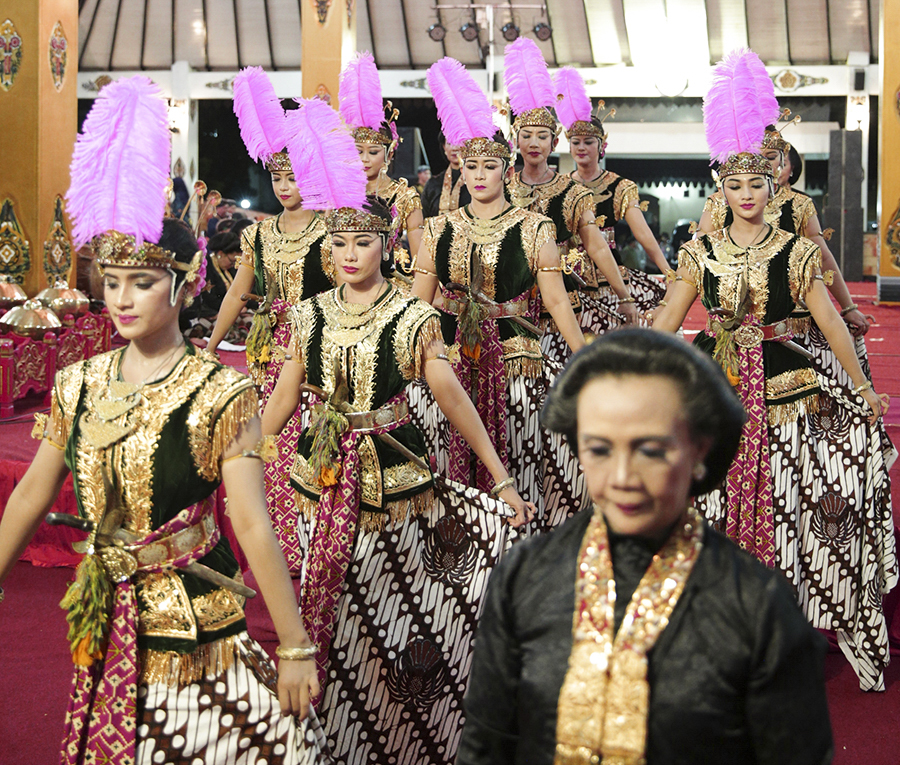 This weekend, Wesleyan will host a delegation of Indonesian musicians and dancers for a series of performances and cultural events. Led by Sri Sultan Hamengkubuwono X of Yogyakarta, the group of over 30 officials, translators, and performers are making stops at Wesleyan, Yale, and the Asia Society in New York City over the week.

The program of events at Wesleyan kicked off Thursday morning with a lecture on Javanese dance conducted by Dr. Suharti, a former Wesleyan visiting professor from 1969-1972. The event also included a demonstration of Javanese court dance by the delegation’s dancers, who arrived in Middletown on Monday. Other events during the weekend include a performance by the court musicians and dancers on Friday night, a symposium titled “Enacting Ethnicity and Nationalism in Indonesian Performing Arts” on Saturday morning, and a puppet play on Saturday afternoon.

In the works for almost two years, this weekend is the culmination of efforts made by Wesleyan alumni, faculty, and staff in coordination with representatives from Yale, the Asia Society, and the American Indonesian Cultural and Educational Foundation to bring these performers to campus. One alumnus in particular, Wayne Forrest ’74 M.A. ’76, who is the president of the Indonesian American Chamber of Commerce and got involved with Javanese gamelan during his time at Wesleyan, spearheaded efforts to bring the Sultan to Middletown. Along with other members of Wesleyan’s Gamelan Ensemble, Forrest participated in the 2018 International Gamelan Festival in Solo, Java, Indonesia in August.

With Yale’s recent acquisition of a collection of Indonesian puppets, Director of Wesleyan’s Center for the Arts (CFA) Sarah Curran sees this weekend’s events as particularly timely.

“With that gift, suddenly there’s this density of expertise in Indonesian performance in this small area, in a 30-mile radius,” Curran said. “There’s been an ongoing dialogue [with the Sultan], and now seems like a ripe moment for their visit.”

Throughout the week, the performers have gone down to New Haven for events at Yale and participated in rehearsals for Friday’s performance in Crowell Concert Hall, which had to be reconfigured in order to fit both the gamelan and a stage for the court dancers. Students and community members in Wesleyan’s Advanced Javanese Gamelan Ensemble will join the musicians and dancers in Friday’s performance.

Winslow-Kaplan Professor of Music Sumarsam, who has been a gamelan instructor at Wesleyan for over 40 years, has been working with the ensemble throughout the semester to prepare the pieces that will accompany Friday night’s dances.

Sumarsam said that people who are unfamiliar with Indonesian music and dance will be surprised by the gamelan’s scale.

“I think they will be able to see the magnificence of the gamelan…with the carving and the painting and the big gongs, small gongs, and strings,” he said. “And the first time people see the gamelan, they’re always amazed by the visual presentation of it.”

Jennifer Hadley, a member of the ensemble and employee of Olin’s Music Library and Special Collections and Archives, said that the group has been practicing with the court performers throughout the week in preparation for Friday’s event.

“Now that the musicians and dancers from Yogyakarta have arrived, there have been many more rehearsals with them so that we can get used to their style, tempos and the transitions between pieces so that we can match the dancers,” Hadley wrote in an email to The Argus.

The Sultan’s visit to campus will also involve meetings with President Roth and members of Connecticut’s Indonesian community, and representatives from the City of Middletown will present the Sultan with a key to the city at Friday’s performance.

Curran and her colleagues at the CFA see this weekend’s events as a recognition of Wesleyan’s expertise in Indonesian arts.

“It’s a wonderful honor, and I think it’s a recognition of the global scope of the arts at Wesleyan, and our long history of engaging with Indonesian performance and international performance,” she said. “Wesleyan is known for its program in ethnomusicology and its focus on global dance. I think this epitomizes the best of that relationship and worldview.”

Curran hopes the Sultan’s visit will strengthen Wesleyan’s relationship with the court of Yogyakarta and open up the possibility for future collaborations. She sees the series of events as providing audience members with a type of cultural education that they may not get elsewhere.

“I hope [audience members] get a taste of a culture that is very different from ours, and I hope they have a chance to engage in conversation with some of our Indonesian community members and the ideas presented at the symposium,” she said. “I hope it expands our conception of the world beyond Middletown.”