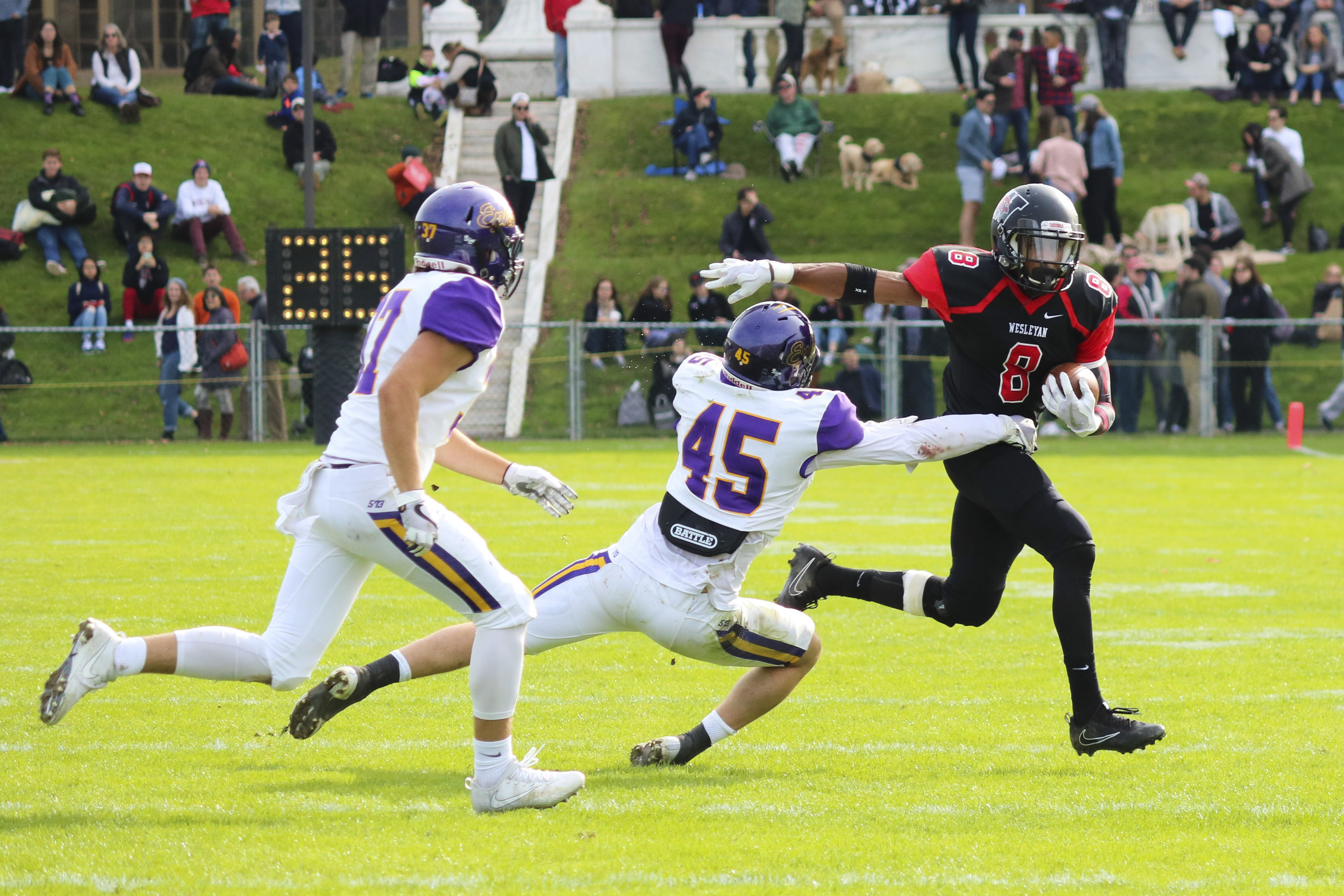 Football played brilliantly this week against Little Three rival Williams and came back with a strong victory that completely transformed how this season will end for the team. Though it was not the most exciting game for spectators, with each team punting at least nine times, both sides had formidable defenses going into the match. Overall, a strong defensive performance by the Red and Black, especially against the run, helped give Wesleyan the win in Williamstown and pushed the Cards’ record to 43-76-5 all-time against the Ephs.

The Wesleyan offense was not as flashy as it was against Bowdoin, but the game plan was simple and effective. The Birds tallied 272 yards of total offense on the day, with 151 yards coming through the air and the other 121 yards coming from the run game. Quarterback Mark Piccirillo ’19 only completed 9 of his 17 attempts, but one of them was a 75-yard pass to wide receiver Hallvard Lundevall ’20 in the fourth quarter to help seal the game. Moreover, in this very competitive match, the Wesleyan offense did a fantastic job of maintaining possession (32 minutes to 28), despite running fewer plays than Williams. The running game was balanced and strong with both Piccirillo and running back Glenn Smith ’21 picking up 43 yards, while Smith also scored a touchdown on the ground in the second quarter for the first score of the game. More impressively, this performance was against one of the top defenses in the NESCAC, who had only let in 89 points until this week’s match. This season, Williams has already defeated Trinity, the Cards’ final opponent who stands in second in the conference standings.

Though the offense did a good job on Saturday, it was really the Cardinal defense that stole the show. The defense finished off the game strong, allowing the Birds to return to Middletown with a victory that the team desperately needed after a rough few weeks.

Both Eli Blair-May ’20 and Will Kearney ’20 deserve special mentions for their interceptions on Saturday. Blair-May especially deserves props for his 30-yard interception return for a touchdown. It marked the final Wesleyan score of the day and helped seal victory for the Cards in the fourth quarter.

Similarly, Jackson Eighmy ’21 earned a selection for NESCAC Defensive Player of the Week. He tallied three sacks as well as another two tackles for a loss, a stand out performance that helped the Red and Black defense command the field.

The defense as a whole did a fantastic job stifling the Williams offense, holding them to under 300 total yards of offense. They did a great job of forcing punts on important third downs, as Williams was only able to convert four of their 18 third down attempts. Most impressively, Wesleyan held what had been the third best rushing attack in the conference to a total of -8 yards on the ground.

However, this week’s performance was not perfect and several previous areas of difficulty returned to cause issues. Penalties were an issue as the Cardinals gave up almost 120 yards off penalties throughout the matchup, accounting for one-third of Williams’ normal offensive output. At the same time, Williams surrendered 90 yards of penalties of their own. In addition, Wesleyan struggled greatly to sustain drives and only converted a single third down throughout the match. It is crucial that the Cards improve that number before playing a less forgiving Trinity team.

The last match of the season next week is against Trinity. The Bantams have the most prolific offense in the conference, having scored 315 points (outscoring their closest competitor Tufts by 82 points). Trinity also has the second best defense in the conference, only having let in 3 points more than the best defensive team in the league, which is Amherst. But Wesleyan played spoiler last week against Williams and can feasibly upset Trinity at home this weekend. This week’s player of the week is Jackson Eighmy for winning NESCAC Defensive Player of the Week thanks to his brilliant three sack performance. The Red and Black will need multiple standout performances to go into the offseason with three straight wins.