“The Chilling Adventures of Sabrina” Likes to Live Deliciously 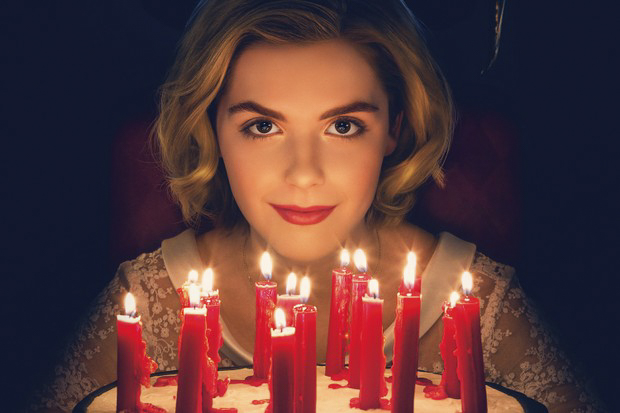 The world of Netflix’s new show “The Chilling Adventures of Sabrina” is about as far from the 1996 sitcom, starring Melissa Joan Hart as the titular spellcaster, as one could possibly get. Some of the fundamentals are the same: Sabrina Spellman (Kiernan Shipka, bringing plenty of spunk to the role) is half-mortal and half-witch, is dating Harvey Kinkle (an adequate Ross Lynch), and lives with her two witchy aunts, Hilda (a sweet Lucy Davis) and Zelda (pitch-perfect Miranda Otto). In this adaptation, however, Sabrina’s sweet sixteen brings a lot more than her driver’s license. On Halloween, Sabrina’s sixteenth birthday also ushers in her Dark Baptism, or the ceremony where she’ll sign her name in the Book of the Beast and pledge herself to the Dark Lord, otherwise known as Satan himself.

“Sabrina” takes place in the vaguely New England town of Greendale, which heavily features some retro ’60s aesthetics despite taking place in the present day. The town of Greendale has everything: spooky mines where demons live, an abandoned church that Sabrina’s coven uses to worship Satan, and creepy woods where 13 accused witches were hanged! All of these settings contribute to some very effective world-building; “Sabrina” has its tone nailed down. What it could lay off of is the on-the-nose music cues. (“Sixteen Candles” plays as Sabrina blows out her, wait for it, sixteen candles.)

The two-part premiere takes a lot of the burden in setting up this very intricate world, which makes it a heavy two hours to get through. Sabrina is introduced, as well as the two halves of her life. On the mortal side, she has her boyfriend Harvey and her friends Roz (Jaz Sinclair) and Susie (Lachlan Watson). On the witch side, she has her aunts and her cousin Ambrose (a thoroughly engrossing Chance Perdomo), a warlock on house arrest and unable to leave the Spellman property. The Spellmans belong to the Church of Night, headed by the subtly named Faustus Blackwood (Richard Coyle). Sabrina’s witchy foil exists in the form of the Weird Sisters, led by Prudence (a spell-binding Tati Gabrielle)—the witch version of Libby Chessler, if you will.

The premiere sets up Sabrina’s dilemma: At her Dark Baptism, when she signs her name in the Book of the Beast, she’ll have access to great power at the discretion of the Dark Lord, but she’ll never see her mortal friends again. Sabrina wrestles with the issue for much of the first two episodes, unable to reconcile signing her soul and body over to the male figure of Satan to gain such power, even despite the urging of her devout aunt Zelda and the subtle manipulations of the mysterious Ms. Wardwell (the absolutely magnificent Michelle Gomez). Once the Dark Baptism reaches its dramatic finish, the series lets up and breathes, taking on both a serialized structure with a long-term story, as well as some distinct episode-level plots.

In order to sell such lines as “Oh, thank Satan,” “Sabrina” needs an impressive array of performers, and boy, does it have one. Shipka is excellent as Sabrina, somehow able to make her intermittent naiveté charming and pull off headbands with a skill rivaling that of Blair Waldorf. Sabrina’s mortal friends and boyfriend are all charming, watchable performers, but the real excitement happens on the magical side of things. As her aunt Hilda, Lucy Davis is the perfect good cop, who is able to lend a spot of comedic relief without sacrificing her ability to land a more dramatic moment. Miranda Otto as Zelda strikes a delicate balance; as the more rigid and devoted aunt, she must be able to deliver a sharp zinger, proselytize about the Church of Night, and convince viewers that she’s still warm enough to have cared for Sabrina. Otto pulls it off with aplomb; by the end of the series, Zelda is one of the characters to see the most growth. Chance Perdomo as Ambrose is a scene-stealing performance; he also manages to convey a warm, caring presence in Sabrina’s life while conveying the complexity of the character. Another breakout performance comes from Tati Gabrielle as the Regina George of the witch school (The Academy of Unseen Arts). Gabrielle layers Prudence with grace and cunning, while never sacrificing her more human side. She’s a fascinating character brought to life by a fascinating actress; the episodes that dedicate a substantial amount of time to Prudence are among the best.

And don’t think I forgot Michelle Gomez as Ms. Wardwell. Her marvelous performance deserves a paragraph to itself. Ms. Wardwell starts as the mousy teacher at Sabrina’s school, until she’s possessed by a demonic presence intent on manipulating Sabrina to turn to the Dark Lord. And let me tell you: If I were Sabrina, it would have worked. Gomez fully embraces the campiness inherent in the show and the results are exquisite. Gomez slinks across the screen and smirks, delivering line after line with glee. She acts as a teacher and mentor for Sabrina, caring and empathetic, if a little intense. (At one point she urges Sabrina to fight bullies with “hellfire.”) She’s also deliciously intimidating, trading barbs with the sketchy Father Blackwood. Even watching her sip her drink is thrilling television. If there were a Book of Michelle Gomez that I had to sign in blood, I would do it in a heartbeat.

“Sabrina” is a strong freshman showing, but it’s not perfect. Namely, if Sabrina has to choose between eternal life/limitless power and her mortal friends, it’s kind of a no-brainer; her friends are really boring. They become marginally more interesting once they become more involved with the main plot, but it’s still not enough to outweigh the intrigue going on in the Church of Night. And while Sabrina herself is the subject of much scrutiny, she never seems anything more than ordinary, despite some extraordinary headstrongness. Shipka makes you root for her, but it would be great to see a little more evidence of Sabrina’s exceptionalism.

Both “Sabrina” and Sabrina have interesting things to say about the male source of the (largely female) witches’ power, specifically the idea that their body belongs to the Dark Lord after the Dark Baptism. There’s a lot at play in that ceremony: Sabrina shows up in a wedding dress, Satan is later likened to a groom. It’s an important message about the supposed female empowerment of witchcraft still being determined by men. Many of the high-ranking officials in the Church of Night are male. Perhaps the most telling is an interaction between Sabrina and Prudence in the second episode, where Sabrina asks why the Dark Lord would never allow her to have freedom and power. Prudence laughs and answers, “He’s a man, isn’t he?” In the first season, “Sabrina” strives to show the problems with a world where men determine the costs of female power. Here’s hoping the (already renewed) series shows Sabrina burning it all down with hellfire.