The Story Behind the Flyer: Connecticut Man Walks in Support of DREAMers 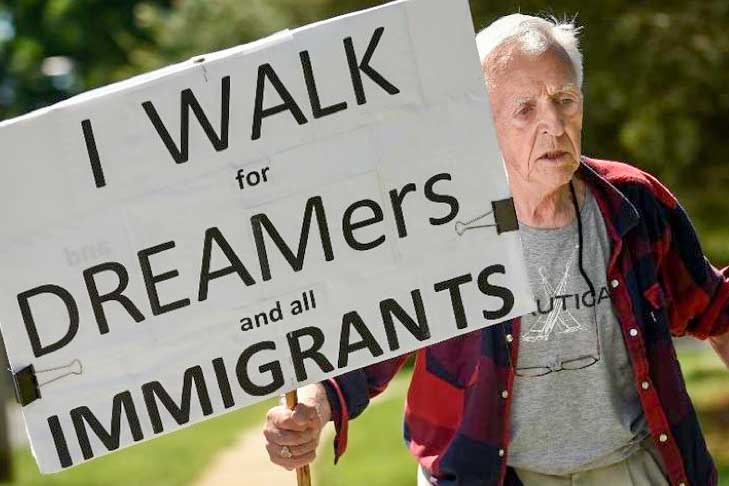 Outside of the Allbritton Center, a flyer on a post told the story of a 78-year-old man who walks every day in support of undocumented immigrants. The Argus reached out to Alan Dornan to hear about what keeps him putting one foot in front of the other.

On Jan. 25, Wethersfield, Conn., resident Alan Dornan was watching Senate hearings on CSPAN when he heard a voice. The hearings had been going on for weeks, and there was a portion of a bill to provide Dreamers legal status and a pathway to citizenship. It seemed to Dornan that the senators were using undocumented immigrants as pawns in the battle of reelection.

He recalls asking the voice, “What can I do? I’m 78 years old. I have severe scoliosis, spinal stenosis, and a high, squeaky voice. ”

He heard the voice reply, “Walk.”

And so he started to walk, every day, rain or shine, 2.2 miles around his neighborhood, carrying a sign that in thick, black letters reads, “I walk for DREAMers and all immigrants.” Though the walk causes him significant pain due to his scoliosis and spinal stenosis, Dornan feels the pain and sacrifice is necessary to show how much he cares.

“When you step out and do something that’s really painful for you, maybe people will believe,” Dornan said. “So my motto, which I stole from Star Wars, is, ‘There is no try.’ I think that the message to me was, ‘You need to do something.’ I started doing something, and I don’t use the word try anymore. If I come to the end and look back I can use the word try, but looking forward, it’s not a question anymore. You don’t try, you just do.”

Dornan has walked for 279 days in a row, chronicling his journey on Facebook and Twitter to thousands of followers. Never having liked social media before, he started with a small following, but the day after an article and video in The Hartford Courant, he woke up to find his Twitter following had skyrocketed overnight, from 29 to 1,100.

“I now have almost 9,000 followers,” Dornan said. “Most of my followers on Facebook are immigrants, and they’re so grateful for what I’m doing. I get thousands of messages every day. It’s been astounding.”

The in-person reception has been mostly positive too, Dornan said, and he very rarely finds himself in confrontations with those who disagree with his sign. As he walks, people in cars will honk their horns, and neighbors will come out and join him for part of his route. On the day we spoke, he had been caught in an unexpected rainstorm, and a man came out of a nearby house to give him an umbrella. If there are negative reactions, Dornan said he ignores them and keeps going.

On Oct. 21, Dornan led a walk from the capital building in Hartford to various locations around the city that have ties to immigrant history. Followers of Dornan led mirror walks in 22 cities across the country.

Though Dornan said he falls into the category of being spiritual and not religious, he often walks to a mantra of prayer. He believes walking in support of immigrants has in many ways been his calling, and he urges students to act on their beliefs, to avoid being distracted by materialism, and to follow their instincts to help create change.

“I believe that we are our brothers’ and sisters’ keepers and they are our keepers,” Dornan said. “We have to look out for one another. We’ve got to act on it. I’ve always believed all these things, but I never acted on it until I was 78 years old.”

When Dornan began walking, he was in no way a newcomer to social justice causes. He had always looked up to radical activists like Daniel Berrigan, Dorothy Day, and Thomas Merton, he volunteered in Haiti, and he had been, with his wife, a foster parent to over 250 newborn babies over a 16-year period. But despite his involvement in social justice activities, Dornan said that it wasn’t until he started walking that he truly stepped across the line.

Though Dornan is discouraged by the actions of the Trump administration and anti-immigrant policies, he maintains hope as he continues his walk.

“If you don’t have hope, you might as well die,” Dornan said. “Things are hard right now, but I have hope they will change. I’ve met a lot of good people out there. People are too immersed in their day to day lives, so I think we can just make people more aware of what’s happening in a situation like this, which is a horrible situation. There are long-term solutions and shorter solutions, and the long-term solution as far as I know is to give the 11 million undocumented immigrants legal status and a pathway to citizenship.”

Dornan’s only son, Aaron, was 18 when he died in a car accident 20 years ago. When he spoke of having hope for his cause, Dornan recalled a conversation with Aaron after watching five girls reject his proposals for junior prom. Dornan said his son is his inspiration and is part of the reason he continues to walk.

“One day I said to him, ‘Aaron, I have a question for you. How can you deal with that kind of rejection?’ And without any hesitation, he turned to me and said, ‘That’s easy, Dad. I have high hopes but low expectations,’” Dornan said. “So I guess that’s my answer to you. I do have high hopes, but I have low expectations in the short run. But I’ll keep on going. We’ll all keep on going.”