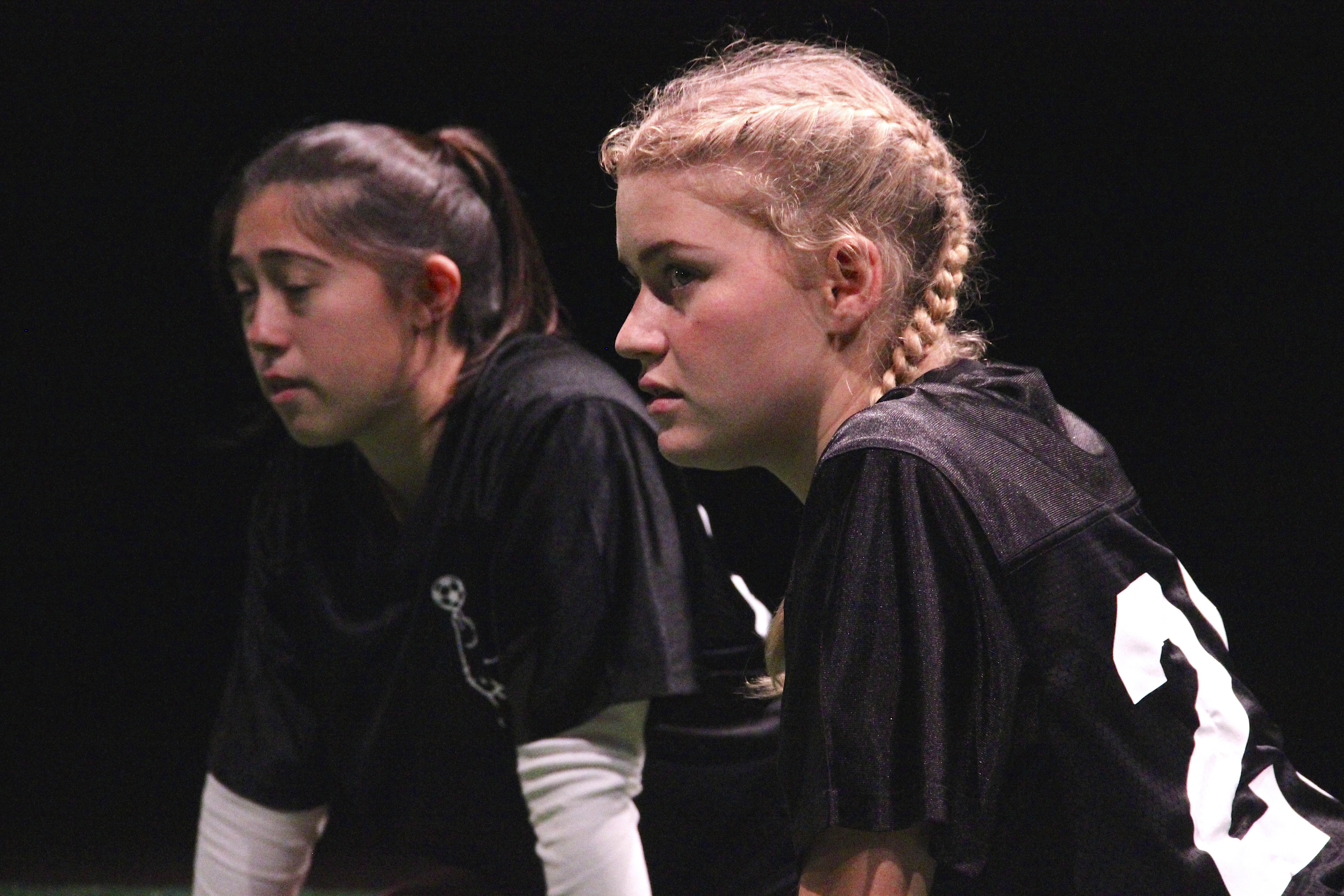 It begins with a cacophony of voices: nine young women talking all at once. Second Stage’s production of “The Wolves” (which ran from Oct. 11-13 in the ’92 Theater) has little in the way of exposition or theatrical transition. Instead, the audience is allowed to just witness the titular Wolves, a competitive and rambunctious indoor women’s soccer team, as they go through the process of stretching on astroturf while sharing all of their thoughts to each other in lively conversation. Depending on where an audience member sits, they might focus in on different players, hearing vastly different conversations, ranging from a tampons vs. pads debate, to favorite Harry Potter houses, to even the Khmer Rouge genocide. While one might not even consider this mess of nearly unintelligible dialogue to be a real play, this opening scene serves as a perfect prologue to a show, and production, that radically asks the audience to re-approach what we think theater, and young women, can be.

“The Wolves” by Sarah DeLappe premiered off-Broadway in 2016 and was a finalist for the Pulitzer Prize in 2017. But don’t let the critical success fool you: the play is deeply relatable, and has become one of the most produced plays across America this year. The play’s universal appeal is probably due to its hyper-specificity: DeLappe allows nine women to speak in language that is painstakingly accurate to the way in which millennial women talk to each other, without judgement or patronizing. From discussions about the effectiveness of “Emergen-C” to calling each other “Insta-whores,” the play doesn’t hold back on the sprawl of unfiltered conversation. On the page, DeLappe’s words look like sparse concrete poetry: phrases scattered through space, but purposefully so. As much as it’s a play, it’s also a rough outline, begging for a voice’s interpretation to say these words out loud and bring them to life.

Under the skilled direction of Betsy Zaubler ’21, Second Stage’s production of “The Wolves” holds true to the play’s challenging text, forcing the audience to reconsider the traditional “play” by having all of the actors onstage for the majority of the runtime. Whether it’s running drills, stretching together, or just talking after the game, there’s a fluid sense of motion for the entire show despite the fact that the entire show takes place within a confined setting. The repetition of movement also transforms the mundanity of the show’s proceedings into an almost sacred, ritualistic process that these high school girls have stumbled into. Within the team, there are rules you must follow, whether it’s about which jokes you’re allowed to tell or how you should stretch before games. But it’s also a world in which, maybe for the first time in their lives, these women have the opportunity to define and create the rules for themselves.

The complex choreography of movement across the stage comes so naturally because of the pure chemistry between this ensemble of actors. Despite the fact that each team-member is never given a name outside of their jersey number, every actor finds the inner depths of their character. The stoicism of #25 (Ray McCann ’21) as team captain, forced laughter of #8 (Kela Sachs ’19) and unabashed crudeness of #13 (Ava Calabrese Grob ’20) are particular highlights, although it would be impossible to list all the nuanced world-building that happens onstage. In a play with this many bodies on stage, it would be easy to slip into stereotype, with each actor playing a “type” from the cafeteria tables of “Mean Girls” (slut, stoner, dumb blonde, jock, etc). Instead, in this production each character is allowed to be recognizable without having to conform to any specific label; everyone is given the chance to exhibit the full range of their emotions, from bruised egos to pure joy. 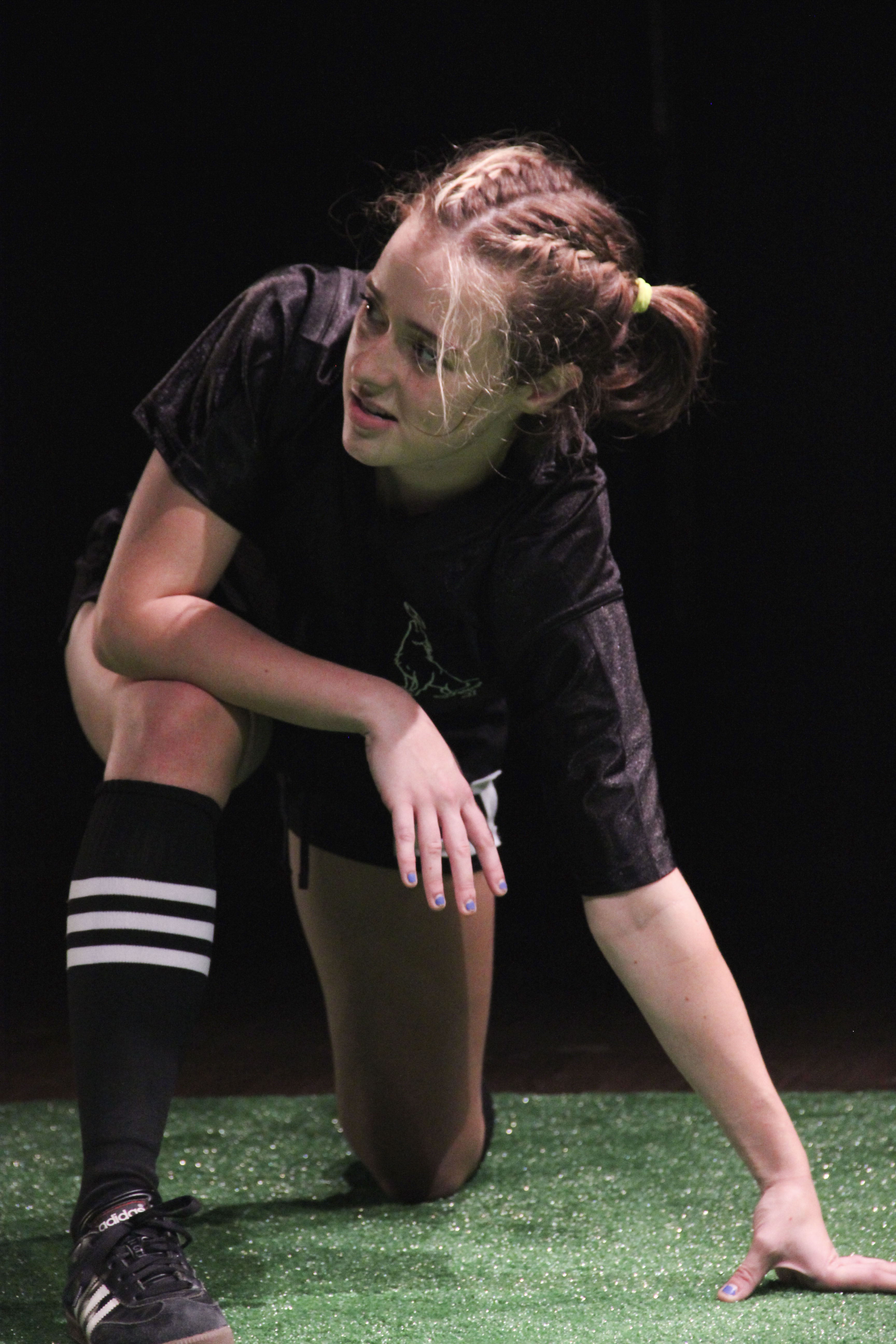 If there are any standouts from the ensemble, they have to be the two team members who are given the most traceable emotional arcs—#7 (Shana Laski ’19) and #46 (Rachele Merliss ’19). #7 is the star striker on the team, before an injury threatens to derail not only her season but also her college prospects. Laski plays the role with a steely attitude and a brashness, which we come to understand masks an unshakable insecurity. It’s remarkable that although #7 is the most confident person on the team (especially about her body and sexuality), it is through her domineering presence that we can identify her vulnerability.

Following an opposite trajectory is #46, a new addition to the team who seems initially unable to break into the coursing stream of words exchanged between her teammates without massive amounts of awkwardness. Merliss captures the unnerving feeling of not belonging with a wounded intensity, allowing us to understand one of the character’s greatest contradictions. When the rest of her teammates put orange slices in their mouths as a joke to take a funny photo, she stares at “The Wolves,” with their crude sex jokes and lack of self-consciousness, as if they are actual wolves—animalistic, brutal, wild, free. Merliss looks on, her face conveying both fascination and repulsion, as if asking, “Is this who I want to be?” She’s caught in an impossible position: wanting to belong and simultaneously fearing why she feels the need to conform at all.

It’s moments like these where the dynamics between high school women are brought into sharp relief. On the field, teammates discuss abortion, menstruation, and eating disorders not as a form of political protest but because these topics are just part of their everyday experiences, no different from what they did on the weekend. The pressures of femininity are distributed through every character in the show, which allows each character to not just perform femininity, but humanity. DeLappe’s choice to not have any male characters, or even adult characters besides a last-minute appearance by Soccer Mom (Maddie Ulevich ’19), makes the theatrical world incredibly insular. While this makes the need to win the approval of the team at times suffocating, for the most part, watching the Wolves interact with each other completely free from any kind of male gaze is a liberating experience. It’s an aspect to the show that this production clearly wanted to emphasize, creating a cast and creative team made entirely of women-identifying students. This is theater created by women, for women.

But which women are included within that feminist lens? Perhaps not as many as possible. The most concerning moment of the show is when characters attempt to identify a racially ambiguous teammate, thinking that she’s Mexican before she reveals she is Armenian. This is one of the few moments in the script when “The Wolves” talks concretely about race, and yet the actress portraying the “Armenian princess” was white with blonde hair. This doesn’t just feel inaccurate to the script. For both the actors and audience, it feels deeply uncomfortable.

“The Wolves” opened off-Broadway with a cast that included multiple women of color, but the majority of the cast in this production is white (the exception being Sophie Brett-Chin ’19 as #00, who gives a powerful solo scene of grief). This casting choice—white actors are not necessarily the “default” when choosing actors for a show—leads to some interesting observations. The specifically white privileges of these suburban high schoolers are emphasized when the Wolves distantly remark on the fate of unaccompanied refugee children, or as one teammate frustratingly puts it, “Mexican children in cages.” But more than anything, having mostly white women in the cast feels like a missed opportunity to explore a wider set of women’s experiences. 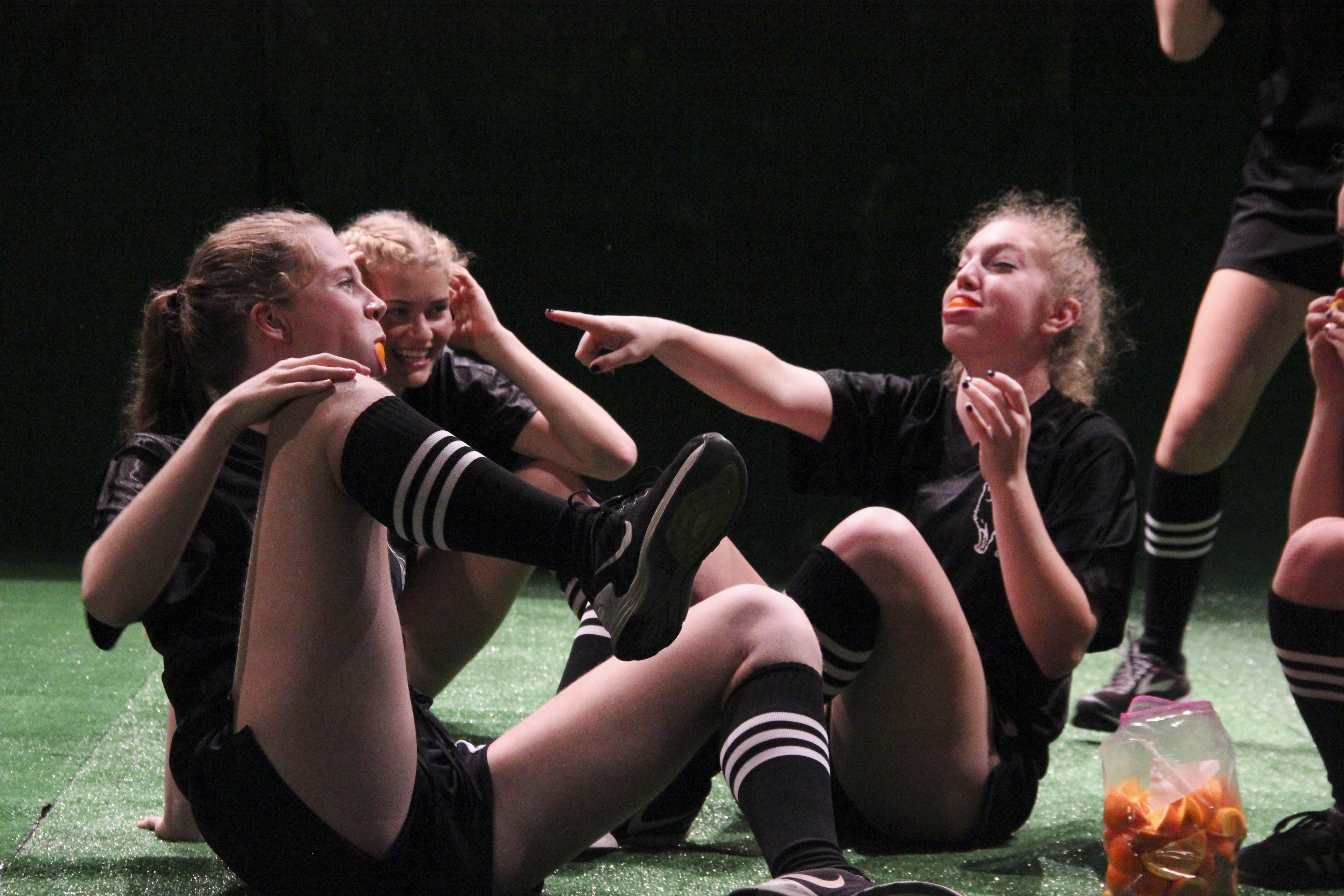 I can’t help but think of the punishment Serena Williams faced after expressing the full range of her emotions she felt during the finale of this year’s U.S. Open. Black female athletes must face an entirely different set of challenges navigating their sport and their identities (themes that “The Wolves” delights in exploring). Since white actresses are given the opportunity in this production of “The Wolves” to radically show their full humanity without tokenization, it’s frustrating to see actresses of color not receiving the same opportunities, especially when there were multiple women of color working within the creative team.

However, these kinds of inquiries into casting are only possible because of the experimental, fun, and surprisingly stirring theatrical space constructed in this production of “The Wolves.” What would happen if the audience was made up entirely of high school women or female athletes, eliminating the presence of a male gaze in the theater altogether? This production of “The Wolves” implants these possibilities into its audience’s minds because of the liberating way in which this show opens up the theatrical landscape to a new set of women. By the end of the show, you realize that the cacophony of voices in the beginning was actually the pulsing sound of a team: individuals grappling with a common struggle together. The more voices there, are the stronger the group is. That’s what “The Wolves” does for theater at Second Stage: It interrogates us for more voices, for a stronger team. It is a world teeming with radical, yet utterly realistic, new ways to represent women on stage. I can’t wait to see what kind of plays and creators enter into theater after being inspired by this show.