As the Muslim community grows on campus, students have found that they need increased resources from the administration. Specifically, members of the Muslim Student Association (MSA) have been campaigning for increased halal food options, as well as the expansion of Muslim chaplain’s position to a full-time job with benefits. Last spring, the school’s Muslim chaplain of two years, Imam Sami Aziz, left to become Director of Religious Life at Depauw University. President of the MSA Eunes Harun ’20 believes the part-time chaplain position in its current state is causing a high turnover rate, leaving Wesleyan in need of a new Muslim chaplain every few years.

“[The administration] searched for a new chaplain all summer and this past September, and we fought really hard to convert the position to full time,” Harun said. “Starting at the end of the last academic year, I knew we really liked our current chaplain and wanted to incentivize him to stay, since he could not support his family on a part-time position. I met with [Vice President for Student Affairs] Dean [Michael] Whaley, and the campaign has been met with ‘No’s’  from the president as well as upper-tier administration, citing the lack of resources.” 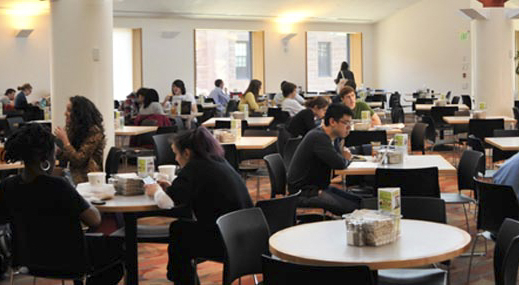 Aside from expanding hours for the Muslim chaplain, the MSA’s other primary concern has been promoting greater access to halal food options on campus. These concerns spring up from a 600 percent increase in student participation in the MSA since Harun’s first year.

“We’re growing very rapidly,” Harun said. “When I got here as a freshman we had only two or three active members.”

Currently, Usdan dining hall serves halal options for dinner Monday through Thursday, and Weshop sells frozen halal meals and bulk halal protein that students may prepare at home. In 2013, Wesleyan released a ticketing system for Muslim students with dietary needs, but the MSA felt that the ticketing othered students by publicly setting students apart. Outside of the meal plan, The Office of Spiritual Life does list various restaurants in Connecticut that meet halal requirements; however, none of the restaurants are in walking distance. In an email to The Argus, The Director of Usdan University Center Dr. Michelle Myers-Brown stated that efforts to bring halal foods to campus began in 2009.

“Usdan serves halal proteins at Marketplace Classics every weeknight, with fish served on Fridays,” Myers-Brown stated. “These programs were developed in conjunction with the various MSA leaders as well as the Muslim chaplains we have had over the years. Currently we are working with the MSA President, Eunes Harun, to see what kind of expansion can occur next.”

What determines whether a food is halal relies on the preparation of the meat, with the exclusion of pork, which is never halal. Harun is quick to point out that the requirements for halal cooking benefit everyone, not just Muslim students.

“It comes with a lot of health benefits,” Harun said. “To be halal, one of the qualifications is that the animals were treated humanely, with a certain standard of living conditions. Halal also encourages meat to be more sustainable, as it should be sourced locally. All of these positive things that come with halal certification also means that the meat is typically healthier.”

All vegetarian options on campus are halal by default, but several students believe that the lack of consistent halal proteins takes away their choice to eat meat or not. Nadiya Jaunbocus ’22 is a Muslim student from the African island state of Mauritius and has had trouble adjusting to the limited halal dining at Wesleyan.

“Usdan proclaims to have halal options Monday through Friday in the Classics section for dinner, but it’s not always true,” Jaunbocus said. “It messes up people’s schedules sometimes when you go there and find out, ‘Oh, they don’t have halal today.’ Like this Monday there were no halal options.”

With limited options at Summerfields, Jaunbocus has tried to fill in the gaps by cooking more meals at home. She planned to cook in college anyway, but her schedule has not always made it easy.

“It’s hard to find time,” Jaunbocus said. “It’s kind of unfair. Everybody else gets their choice of food, and me, I have to cook during midterms week?”

Otherwise, Jaunbocus tries to eat vegetarian but would prefer to be able to choose whether or not to eat meat rather than do so out of obligation.

“I’m just doing Usdan mostly, but trying to live a vegetarian life when you’re not a vegetarian is not fun at all,” she said. “It’s supposed to be a choice, but in our case it’s a lack of choice, rather.”

Harun has estimated that roughly 25 percent of meals on campus offer a halal option. His goal, and the goal for the MSA, is to eventually have 100 percent of non-porcine meat on campus achieve halal certification. Harun stated that, working with the MSA, Bon Appétit has outlined the need for increased freezer space and budget increases in order to make this transition possible, since halal-certified meat is slightly more expensive than average, as well as a distributing partner that can handle Wesleyan’s demand. In the meantime, Harun is looking into ways to feed students in the here and now.

“There are various students who cannot eat lunch during the week because of the lack of halal options,” Harun said. “We have a strong freshman class that cannot eat, which is why I’m exploring more immediate solutions. Possibly dinner on the weekends or some kind of setup for a weekend meal.”

In the State of School Address on Sept. 21, President Michael Roth briefly addressed these concerns, claiming he had been unaware of the need for more halal options.

Brooke Kushwaha can be reached at bkushwaha@wesleyan.edu or on Twitter @BrookeKushwaha.