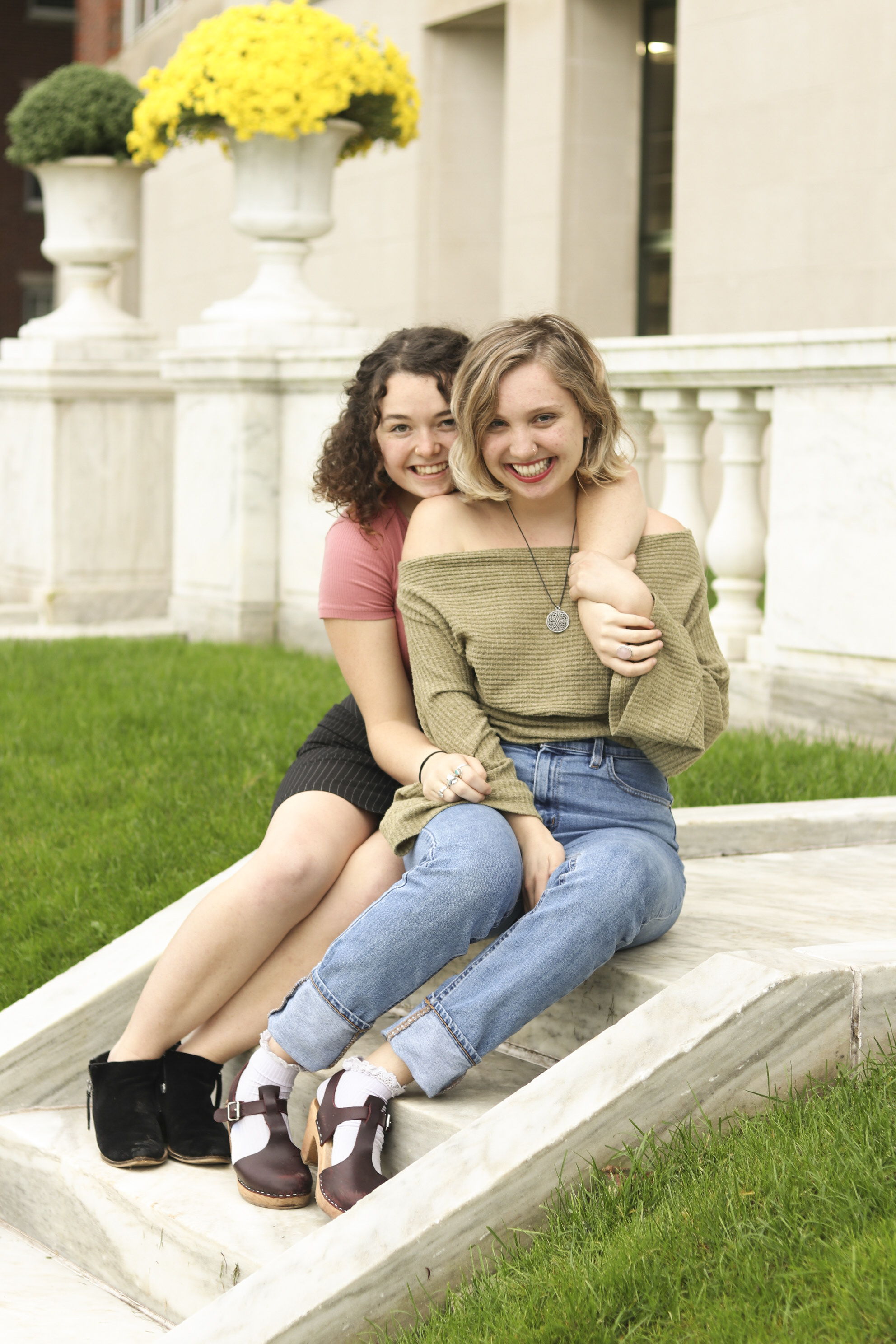 The Features section has broken norms in order to bring together one of the senior class’s most dynamic duos: Emma Austin ’19 and Quinn O’Leary ’19. The Argus sat down with them at home to talk about senior year, somersaults in the stacks, and dropping it like it’s hot.

The Argus: As you know, the typical WesCeleb is only one person. Why do you think you two got nominated together?

Emma Austin: I think it’s because we have very different friend groups so we can be found individually, but we’re most iconic together.

EA: Like I think when we’re walking around campus we’re walking together, so then our friend groups kind of overlap. And we’re always shocked when someone doesn’t know the other person. I’ll be like, “Oh, my friend Quinn,” and they’ll be like, “Quinn who?” And it’s like, “Uh, excuse me!”

QO: But at least with Emma I can say, “You get her emails.”

EA: And with you I can be like, “the girl from Montana.”

QO: Okay, yeah. But Emma’s also from the West. Colorado.

A: Do you guys visit over breaks?

QO: Yeah, we do. Actually, my summer was saved once because I went to Emma’s house in Colorado. I lived in Wisconsin and worked as a fry cook, and I really…detested every moment of it. And I had connections in Denver and was going to go to Denver to work at this program, which is a rehabilitation center for survivors of child prostitution. [The program] is still going on, and I’m still in contact with the director. And at the end of the program, Emma was just like, “Oh, come stay with me”. So I got to stay at her house for a week in Colorado. That was going into our sophomore year. For me, that was the first time where I was like, this is a friendship that extends outside of Wesleyan. Which was very affirming and very cementing.

A: So you met freshman year. Tell me the story.

EA: We met on the first day of freshman year when we moved in. Quinn and Hana [ElSafoury ’19, Austin’s first-year roommate] went to high school together, so I was in my room getting set up with Hana, and Quinn came, and she was so…rattled. [Quinn laughs.] Not in, like, a bad way! It was the first day, nerves are high, and people want to see people they know and love. So she came over, and she walked in with the…ferocity she always has and the ball of energy and she was like, “Hi I’m Quinn!” And my mom was like, “Do you want some of my Kombucha?” And she was like, “Oh, we’re gonna be friends forever.”

QO: I do love Kombucha. And do you remember what I said to you?

EA: And we’ve really been close friends ever since then. And it was weird because we both went abroad different semesters junior year, and so all of junior year…and we both say that was our favorite semester [laughter].

QO: When we got to be our own people…. Just kidding!

A: Sorry to perpetuate that, with the dual WesCeleb interview.

A: Are you okay being seen as this duo?

EA: I think it would be weird if we were not together.

A: Do you guys have a favorite wholesome Wesleyan memory together?

QO: Wholesome? Oof.… Let me just dig into my memory. I mean, looking back at the photo of our freshman class, I’m sitting next to Hana and Emma. And that’s really sweet to me. I liked when we studied…when we did our finals together on 3A, and for breaks we would do somersaults down the stacks.

EA: After Terp, we had such a fun time and we went to Psi U after. And we both were like, so hyped up.

QO: And we were the only people in Psi U.

EA: We’re the only people in Psi U! And we were so hyped up after Terp, and we had so much adrenaline, that Quinn kept doing these like, crazy drops and jumps into splits. And I was doing these backbends. And everyone in Psi U was like, “WOAHHH!” So, that’s kind of a theme for us.

QO: We like to tumble together. Psi U or the stacks.

QO: Is this New York?

EA: Yeah. It’s not like, that wild. I think it’s just indicative of our relationship and our energy that we have together. I was in New York for a little bit, and she came to visit. We found this bar, and Quinn’s like, “Oh, let’s go into this bar.” So I’m like, okay. We go in, and it’s kind of dead.

QO: But the music was amazing! We were really connecting with the DJ; we were like high-fiving him.

EA: He was playing incredible songs. And we just went ham. We were just going for it. Going crazy, like we always do. And Quinn starts dropping it like its hot, which is her classic move.

EA: And all of a sudden, people start dancing. More people come in. The dance floor is absolutely bumping. And this guy comes up, and he’s like, “Hey, I just wanna tell you, you guys MADE this dance floor. You built it from the ground up!”

QO: And that was true. I believe him. Was that wholesome?

A: Absolutely, yeah. So…okay. Let’s say 15 years from now, people are talking about Quinn and Emma. 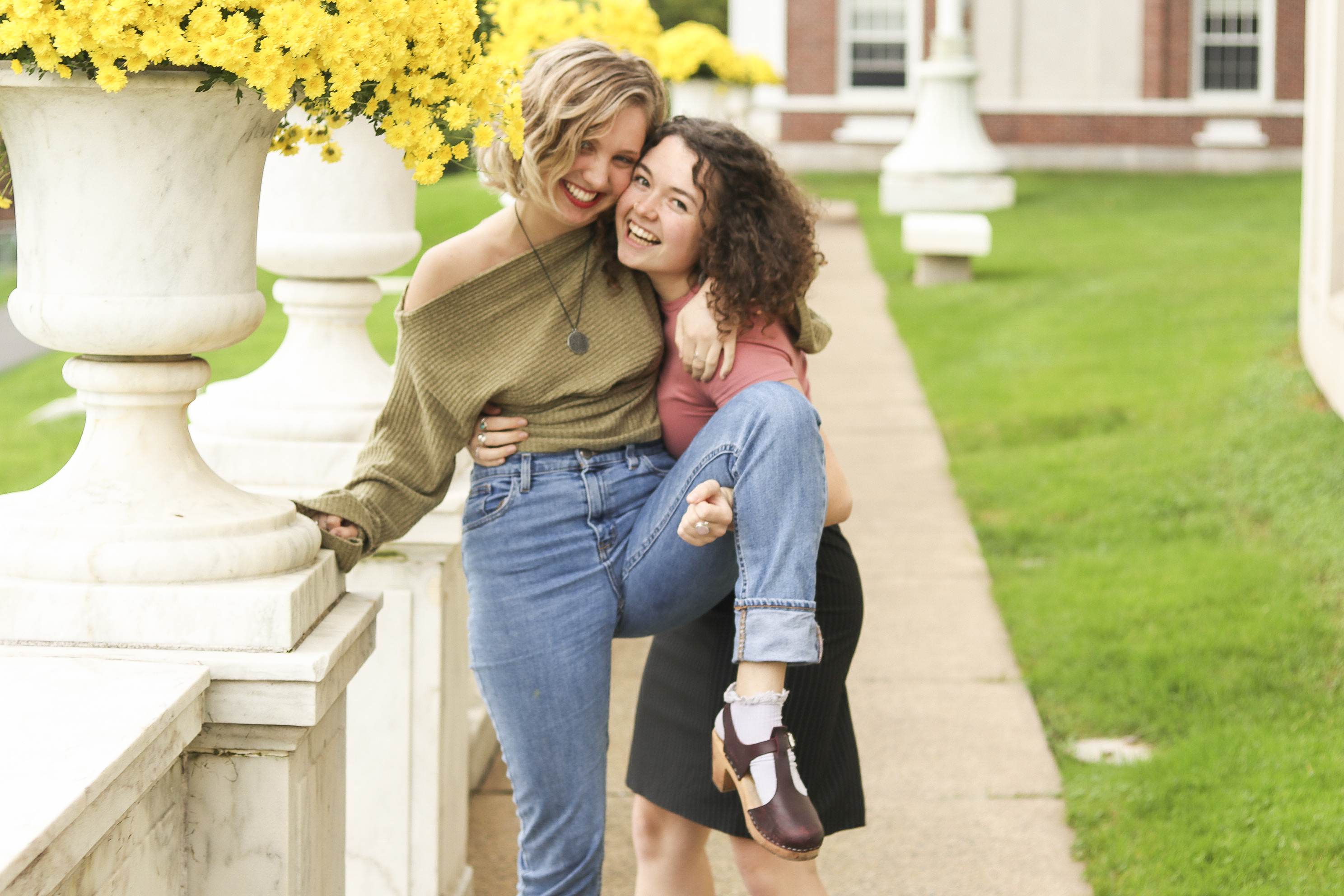 QO: I think that for me, I want them to remember that even though we’re both fun, I’m the fun one [laughter]. But, no, I want them to remember that we like…I don’t know, that our relationship was truly wholesome. It’s real. We’ve had some bumps and some ups and downs, but that makes it only more visceral. But if people are talking about us in 15 years, I think that can be a testament to…the truth that we’ve shared together and the energy that we’ve created but also will hopefully continue to create. Maybe we had a lot of potential here, and…maybe in 15 years that will come to fruition. What do you think?

EA: I think I want people to know that Quinn will be the wild aunt to my children. That when she just shows up on our doorstep, unannounced, my kids will run to the door. That’s what I want.

QO: But what about what people think about when we were here?

EA: I think, like…infectious. And durable. Durable isn’t the most romantic word, but like you said, we’ve been through a lot together. A lot. And there is nothing but pure love in this relationship.

QO: For good and for bad. For better or for worse.

EA: That’s what I was going to say! So I was the best man for Quinn’s wedding. She married herself. Sophomore year. And that swung full circle for me because one time Quinn told me that she fantasizes about giving a speech at my wedding.

QO: I practice in the mirror. And I cry. But yeah, I’m glad you brought up my wedding. I want to renew my vows.

A: So other than the vow renewal, what does the future look like for you guys?

QO: I’m really interested in women’s health, and my passion for intersectional feminism has been there forever and has really been blossoming while I’ve been here at Wesleyan. I’ve been involved in Students for Consent and Communication, I was chair for Take Back the Night, and advocating for survivors of sexual violence has always been really important to me. And now, I think that extends more to women’s healthcare a little bit more generally. So that’s what I’m looking at getting into. Which I want to balance with my own lifestyle aims. Happiness is important, which sounds trite, but.

EA: I have no idea what I want to do.

QO: I have ideas for you.

EA: She always has ideas for me! I think that I really enjoy the work I do for the WSA [Wesleyan Student Assembly], in that it’s kind of broad impact work and change-making. So I think I would want to do something like community organizing, or like grassroots social justice work. But I just want to know that my presence in this world was a net gain. That’s the goal of any career that I embark on.

A: Those are both really good answers. Is there anything else you guys want to see immortalized in The Argus?

EA: I think one thing is that our friendship has grown a lot since freshman year. Even today, we had a little tiff, and Quinn came into my room, and it was totally fine.

QO: I think we were really different people when we got here. And that’s so college, and so, “Oh, college changed me.” But to have grown with another person and accepted them and to have learned from them is really…incredible. And what I want to take with me when I leave here. And her. I want to take her, too.