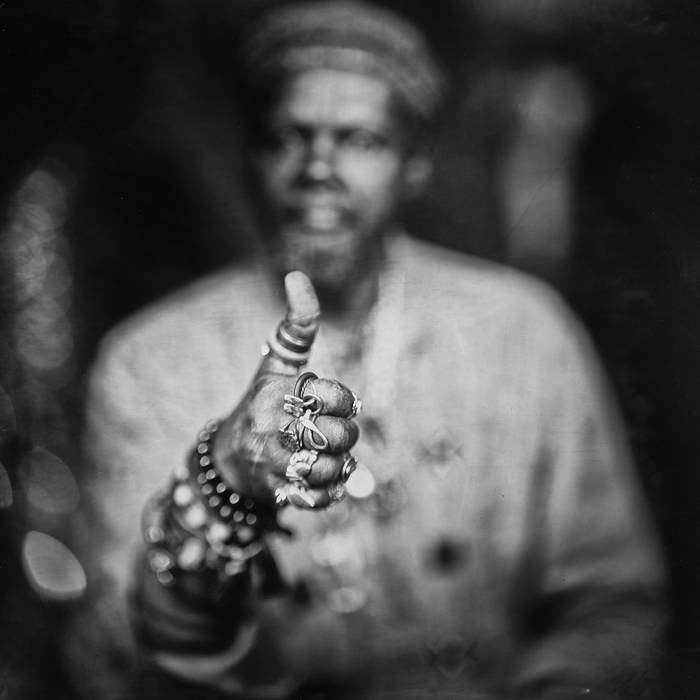 Lonnie Holley’s artworks are often profoundly intertextual. The centerpiece of his new album “MITH,” is named “I Snuck off the Slave Ship,” which also titled his recent solo exhibition at the Atlanta Contemporary Museum. Many of the other songs on the album riff on concepts of alternate space-time that recall Sun Ra (“Coming Back (From the Distance Between the Spaces of Time)”), or dig into the connection of water and memory in African-American history (“There Was Always Water”). The album’s title may be the most direct reference of all though, named after Holley’s 1993 sculpture “MITH.” Holley’s earlier “MITH” takes the shape of a cross, comprised of a long concrete beam and a smaller horizontal tombstone with the letters “MITH” etched on it. Taken from the tombstone of someone named “SMITH,” Holley’s sculpture seems to suggest that “Smith,” one of the most common white American surnames, might hide behind myths of religion, white supremacy, Manifest Destiny, and other American ideologies. Although the sculpture registers on one level as a simple, stark analysis of religion, simply noting that the Christianity may be a “MITH,” it also functions as a complex critique of white mythologies.

Holley’s new “MITH,” an experimental jazz LP released on historic indie label Jagjaguwar, reflects the illusive austerity and intricate intertextuality of Holley’s other works.Through deceptively simple incantations and an improvisational musical approach, Holley calls to mind some of the most profound questions raised by African-American philosophy in the past century, ranging from memory of the middle passage to Afrofuturist visions of outer space.

The first track, “I’m a Suspect,” establishes this theme quickly, finding Holley exploring the weight of stereotypes of black male criminality over ruminative keyboard and crescendos of horns. While Holley’s first line, “I’m a suspect in America,” makes the concept of racialized policing terribly clear, he soon connects this present issue to historical oppressive conditions, remarking “and though I’m not on the chain gang, the games are still the same.” As the song progresses over its seven minutes, Holley pushes his lyrical ruminations further, reckoning that he’ll “end up being a dust speck out in mother universe,” as echoing synths float over the keys, creating a celestial atmosphere. “I’m a Suspect” is an apt primer for the rest of “MITH,” introducing the radical Black politic, free-jazz sound, and Afrofuturist mysticism that Holley invokes on almost every one of the nine tracks following.

Holley’s free-form approach to creating art, which has been present ever since he started sculpting using junkyard materials on his family’s property in rural Alabama, shows up in full force on “MITH.” Embodying the improvisational style of his sculptures, which he often calls “yard art,” songs on “MITH” stretch out in intuitive ways, using auditory space, long track lengths, and non-linear arrangements to create enveloping sonic atmospheres that privilege emotion over (still nearly flawless) technique, recalling the spiritual jazz of Pharoah Saunders and Alice Coltrane.

No song exemplifies Holley’s interest in creating a holistic atmosphere quite like “I Snuck Off the Slave Ship,” the 18-minute centerpiece of “MITH.” The song is gargantuan in scope, following Holley as he spies slave ships on the shore of Africa. He describes the conditions aboard in the hold, eulogizes those who jump into the ocean, and of course, sneaks off himself, only to find himself on another ship. Beginning with a resounding solo piano, and slowly bringing in cathartic horns and crashing cymbals as Holley’s tale becomes more gruesomely vivid, the instrumentation supports the cinematic style of Holley’s lyrics, reinforcing the great intensity with which Holley retells the story of the Middle Passage. Although the song gains much of its power through Holley’s screechy, layered vocal performance and its impressive orchestral grandeur, its concise, yet grave lyrics deserve just as much praise. After detailing the conditions of the Middle Passage, Holley tells his listener that he “took a ride on his imagination,” invoking the philosophical concept of “fantasy in the hold,” which posits that enslaved Africans had to recreate, or reimagine, their reality when exposed to the dehumanizing conditions in the Middle Passage. Later, Holley tells his listener that he saw “humans and companies and factories” on the slave ship, presaging the legacy of enslavement that one sees today in the prison system, the military-industrial complex, and the school-to-prison pipeline.

When listening to songs like “I Snuck Off the Slave Ship” that reference such powerful theoretical concepts, and yet ground themselves in the improvisational aesthetics of “yard art,” it’s hard for me to not think of another southern-born Black artist, Henry Dumas, best known for his short story “Ark of Bones.” In “Ark of Bones,” two Black boys discover a ‘soulboat’ that is powered by the bones of people of the African diaspora. Dumas’ story reads like a diaristic fairy tale, told in the first-person perspective of one of the boys, and yet contains incredibly moving, mystical analysis of Black history. “MITH,” through its free-associative artistic approach, piercing analysis of oppression, and Afrofuturist frameworks, echoes “Ark of Bones,” affirming Dumas’ lasting artistic and sociopolitical resonance.

The epic scale of “MITH” could allow for a specific, rigorous analysis of each track on the LP, from the celestial textures of “Coming Back (From the Distance Between the Spaces of Time)”), which could bring out comparisons to Sun Ra and Digable Planets, to the exploration of the links between the ocean and the African diaspora on “There Was Always Water” and “Back for Me.” Even more difficult tracks on the LP still offer radical, bold insights on subjects of racial domination and inequity. For example, take the noisy anti-capitalist declaration of “Copying the Rock,” which pays homage to both the indigenous struggle at Standing Rock and the Black roots of rock and roll.

Despite the dark undertones and supercharged themes on many of “MITH’s” tracks, Holley maintains an enlivening energy throughout the album, finding “dust specks” in “suspects” and fraternity with lost spirits on “Down in the Ghostness of Darkness.” It may only be right then, that Holley ends with “Sometimes I Wanna Dance,” a ragtime piano-led number in which Holley finds delight in the most basic opportunities for celebration.

“I know there’s humans who love to dance” he says, with the joyful conviction of a man who has met many, many such humans. In the video for the song, Holley nonchalantly walks into a tiny saloon, adorned with an American flag, bright quilts, and photos of Martin Luther King Jr., and starts playing to an all-Black crowd of about 10 or 15. At the end he reveals that the saloon itself was an work of art, adorned with all the memorabilia just for the sake of the video. Embodying his yard art philosophy through and through, Holley again connects his work as a visual and musical artist, suggesting that maybe, even his own works are “MITHS.”

Nick Byers can be reached at nbyers@wesleyan.edu.